Frideeeeeee time for a shotski of whiskey in your pudding….y!

While making this pudding, I unlocked the chamber of enigmas and uncovered the chia seed codex, unleashing a vital secret that will blow your freaking mind: blended chia seed pudding.

As in creamy chia pudding. Put that pudding in a blender and blend it to smithereens until all the little chia nuggets are nice and creamy smooth.

And while you’re at it: heat the stuff up, because haven’t you heard?: hot pudding is ah-may-zing!

Not gonna lie, I originally thought about soaking the chia seeds in Guinness and using Baileys for this pudding to make an Irish Car Bomb-you-in-the-face dessert for St. Paddy’s Day, but then I realized something crucial: I’m not a fan of Baileys, and let’s face it: if there’s a Guinness or twelve in da.house, I’m drinking that ish, because have you tasted it? Nectar of angels right there.

So I skipped the Irish Car Bomb approach and went the straight-up whiskey in the jar-o route. Out popped this crazy-tasty pudding that really isn’t all that bad for you.

Just some sugar from the dark chocolate chips, but chocolate sugar doesn’t count. 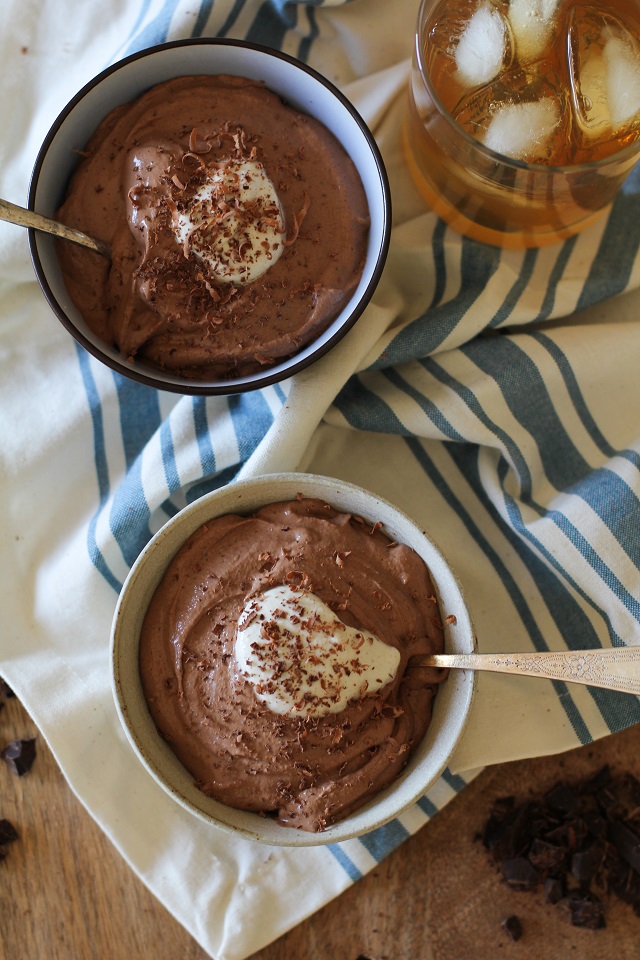 All I did for this boozy batch was heated already prepared chia seed pudding on the stove top with dark chocolate chips, coffee grinds, and whiskey.

I then poured it in a blender and blended the stuff for dayz. Result: bold, steamy, sultry, hot, finger lickin good goo.

True story: you need a pretty powerful blender to successfully blend up the chia seeds.

I used my Blendtec Blender, put it on the soup setting, and let the pudding blend for 90 seconds. I loved eating the pudding piping hot, but it can be served cold, too. When you refrigerate the pudding, it gets even thicker, like chocolate mousse. Like fairy dust melting on your tongue.

Would it be totally ridiculous of me to make this for breakfast tomorrow, whiskey and all? I hope not.

You can make your chia pudding blend easier by churning the chia seeds in a spice grinder to make chia seed meal. Then ALL your puddings can be smooth..and maybe the chia would be more digestible too!

You had me at 'fairy dust melting on your tongue' :)

Blending is the way to go. Take me to creamy, dreamy, spiked pudding town. Love!

I love chia pudding, but I've never had that with whisk! Such a clever idea, my dear! This must be delicious! Have a great weekend ;-)