Grain-Free Apple Cinnamon Pancakes made paleo friendly with coconut flour. Dairy-free, moist, fluffy, and amazing! Serve it up with stewed apples for an amazing breakfast!

After trying Fluffy Coconut Flour Pancakes for the first time, I’ve made all sorts of renditions!

They’re just so moist, fluffy, and inviting…just like a regular pancake!

Plus, they are lower carb, grain-free, and super easy on the digestive system.

Not to mention, they keep you feeling full for hours, unlike standard pancakes where I find myself hungry not too long after eating.

These Grain-Free Apple Cinnamon Pancakes are a true delight.

We get the fluffy yummy pancakes with an amazing stewed apple cinnamon topping for the perfect bite!

While these pancakes require more cooking time than regular pancakes (because coconut flour pancakes are a different beast with different needs!), they are well worth the effort!

Let’s dive into the details!

Coconut flour is four times more absorbent than any other grain-free flour, so you need more eggs and liquid than with recipes using almond flour, for instance. Due to the higher moisture content, these pancakes require more time to cook than regular pancakes.

You can use unsweetened almond milk instead of coconut milk if you’d like, and you can skip the vanilla extract or walnuts.

For the Apple Topping: Apples, cinnamon, pure maple syrup, water, and a pinch of sea salt.

This super simple combination results in the most amazing stewed apple topping for your luscious pancakes!

Heat all of the ingredients for the stewed apple topping in a saucepan over medium-high heat and bring it to a full boil. Reduce the heat slightly, cover the pan and cook, stirring occasionally, until the apples have softened, about 20 to 30 minutes. Remove the cover and continue cooking, stirring occasionally, until the sauce has reached your desired level of thickness.

Mix all of the ingredients together in a bowl until all of the clumps of flour are out and the batter is thick and smooth.

Heat a skillet or pancake griddle over medium heat and add enough oil or butter to generously coat the surface.

Once the skillet has heated up for a few minutes, measure out 1/4 cup of batter and pour it onto the skillet.

If at any time the pancakes begin to burn, reduce the heat! These pancakes require lower heat and more time than regular pancakes.

Repeat for the remaining batter and serve with apple cinnamon topping.

Note: To speed up the process, cook the batter in two separate skillets at the same time.

For an almond flour version, make my Paleo Apple Pancakes!

For the Apple Topping:

To Prepare the Apple Topping:

To Prepare the Pancakes: 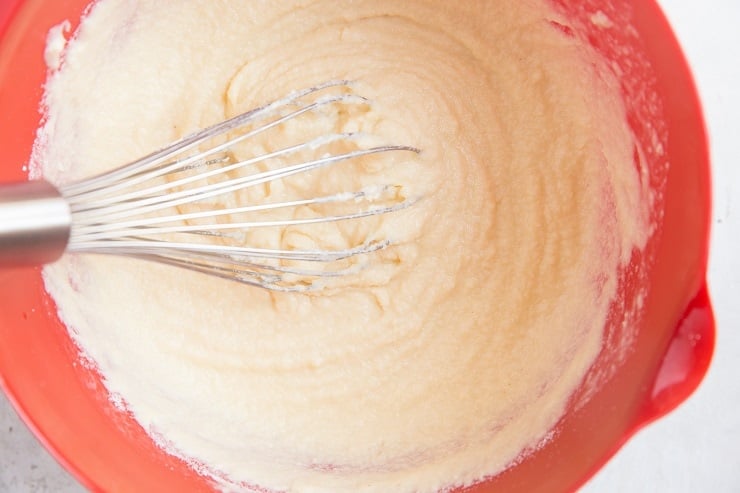 4. Heat a skillet or pancake griddle to medium-low heat and add enough oil to coat the surface. Once the skillet is all the way hot, measure out about ¼ cup of the pancake batter and pour it on the skillet. Allow pancake to cook until sides are firmed up, and middle begins firming up too, about 6 to 8 minutes (no joke!). Carefully flip the pancake and cook another 2 to 4 minutes, until pancake is cooked all the way through. 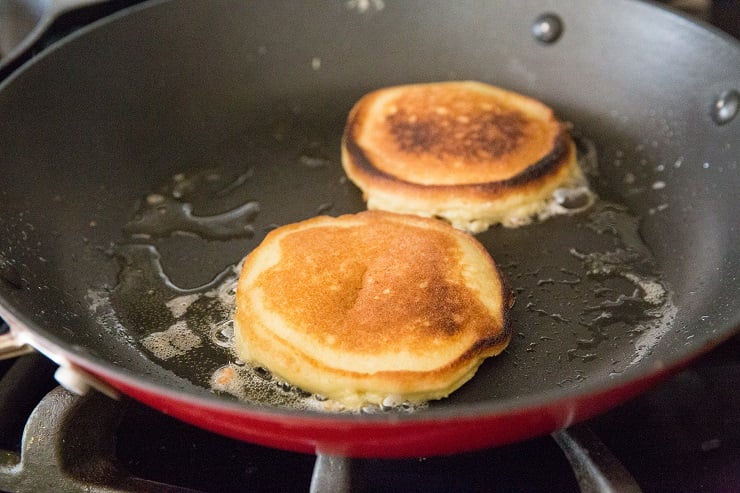 6. Serve pancakes with the apple topping, and enjoy! 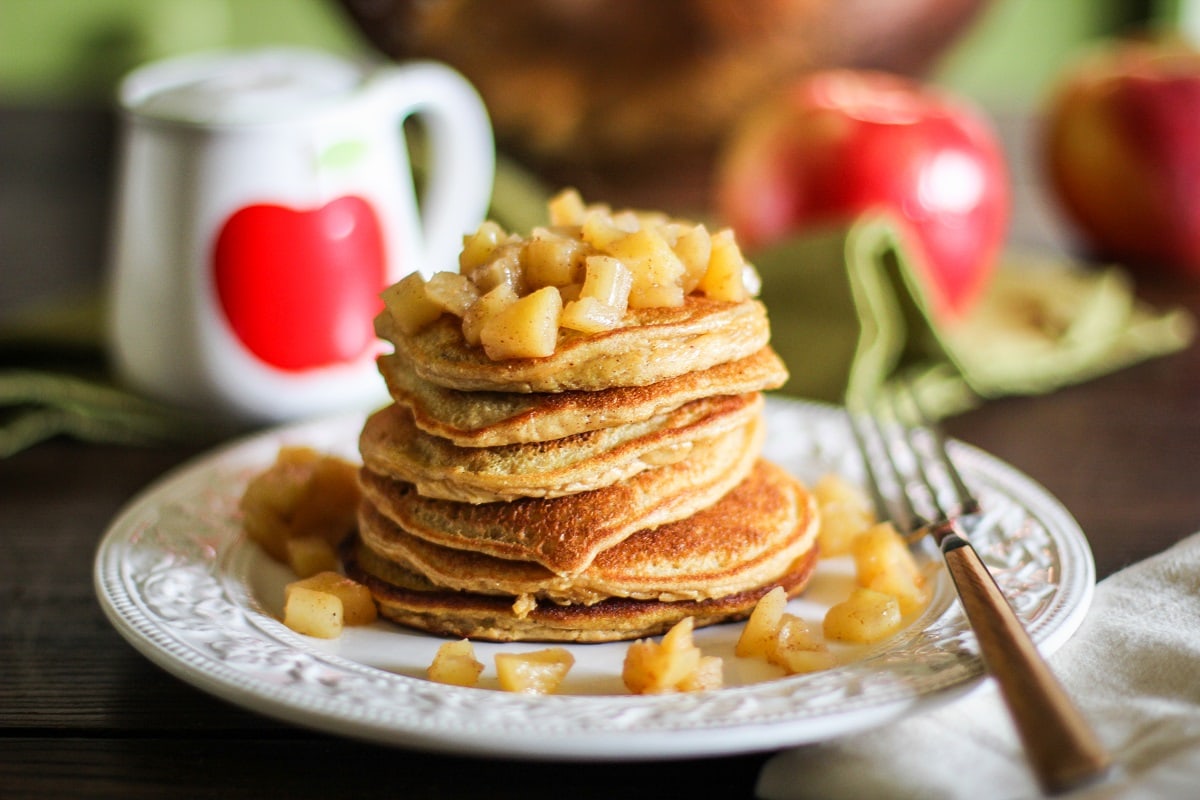 *You can also use unsweetened almond milk

Nutrition facts are calculated for the pancakes only, not including any toppings. 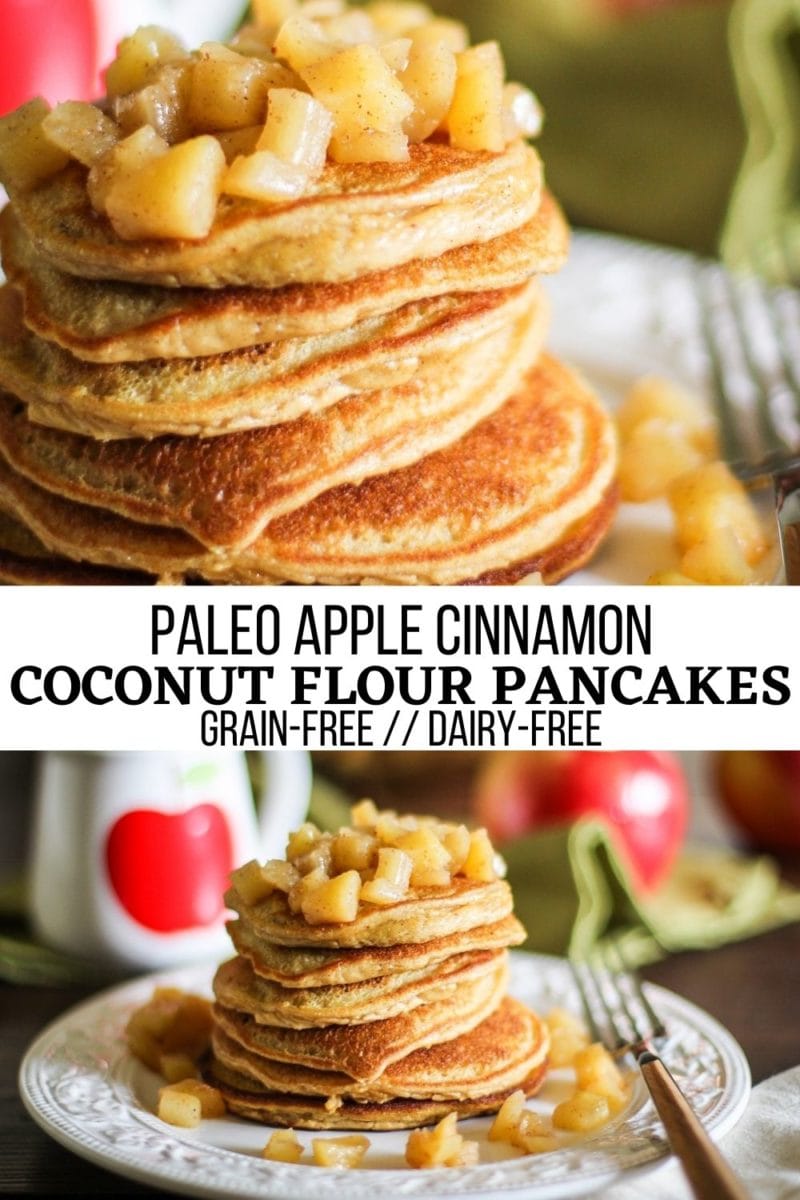 I'm in love with this set of photos! The pancakes look delightful!

Thank you, Rachel! Let me know if you try them!

Yum!! What's the star next to the coconut milk for? I would love to make these but canned coconut milk is hard for me to find, so I am hoping it means almond milk (while not as rich and amazing) would also work?

Also I am a Denver native currently trapped in Wisconsin and I am glad you love it there! I am dying to move back :)

Oops, forgot to put the star in the notes...yup, it's to let you know you can use almond milk instead of coconut milk ;) I'll add that to the notes - thanks for catching it!

My uncles live in Denver and they are always telling me I need to visit--maybe I should! :) I've been trying to cut down on wheat a little bit, so these are perfect. Yay!

Wow, these look delicious! I've only recently become a bit more comfortable with coconut flour, so I'm on the hunt for new recipes! I bet my little girls would love these too. Thank you for the recipe! :-)

These look delicious! Love how fluffy and yummy they look!

I found your blog thanks to Heather from Kiss My Broccoli and I love it :)

Welcome, my dear! Thanks for stopping by!