Thick, creamy, decadent chia seed pudding with caramelized pears and yogurt – a sweet breakfast or healthy treat that only takes a few minutes to prepare. 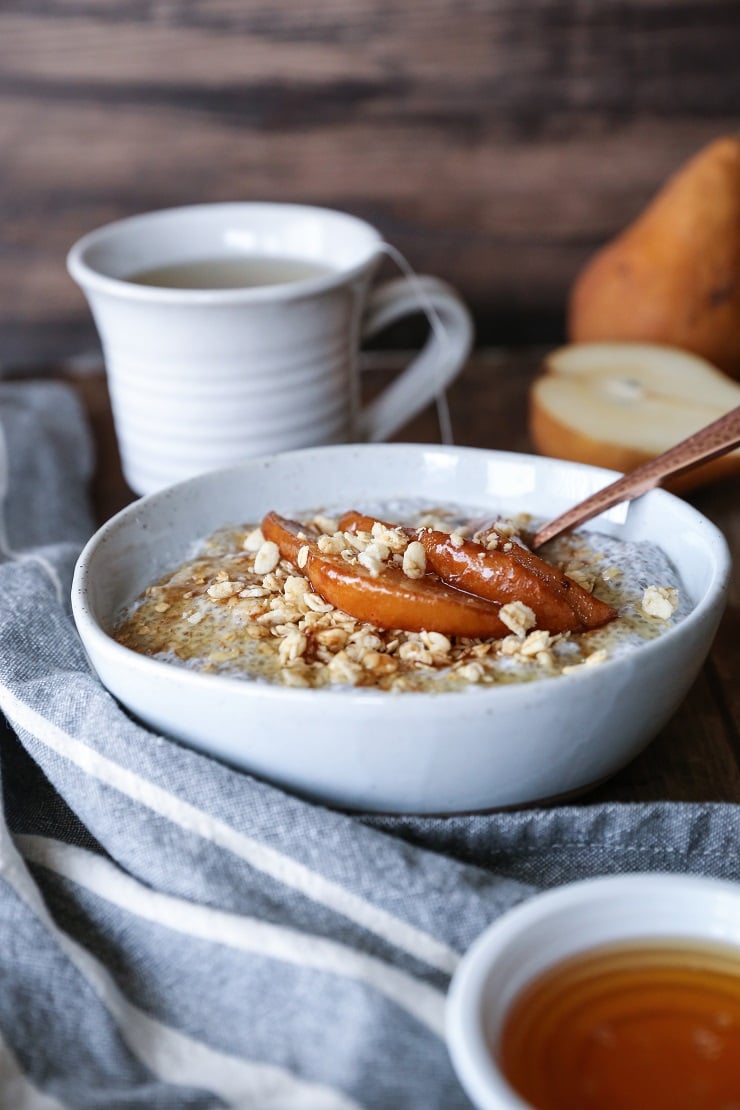 Stop it, don’t make me fall in love with you.

My chia theory is nearly a dessert-only situation.

Mainly because I love my pile of egg scramble in the morning. It’s just so tough to beat! In any case, chia seed pudding has played a special role in my food-soul ever since I tried it umpteen (four) years ago.

Lettuce discuss the caramelized pears in this application.

They’re super easy to prepare and are made without refined sugar, using pure maple syrup.

All you do is slice up a ripe pear (or two), heat them over medium to medium-low heat in a small skillet with some cinnamon and pure maple syrup, and you end up with a buttery, sweet, caramelized melt-in-your-mouth pear jubilee.

It’s almost too good to be true. 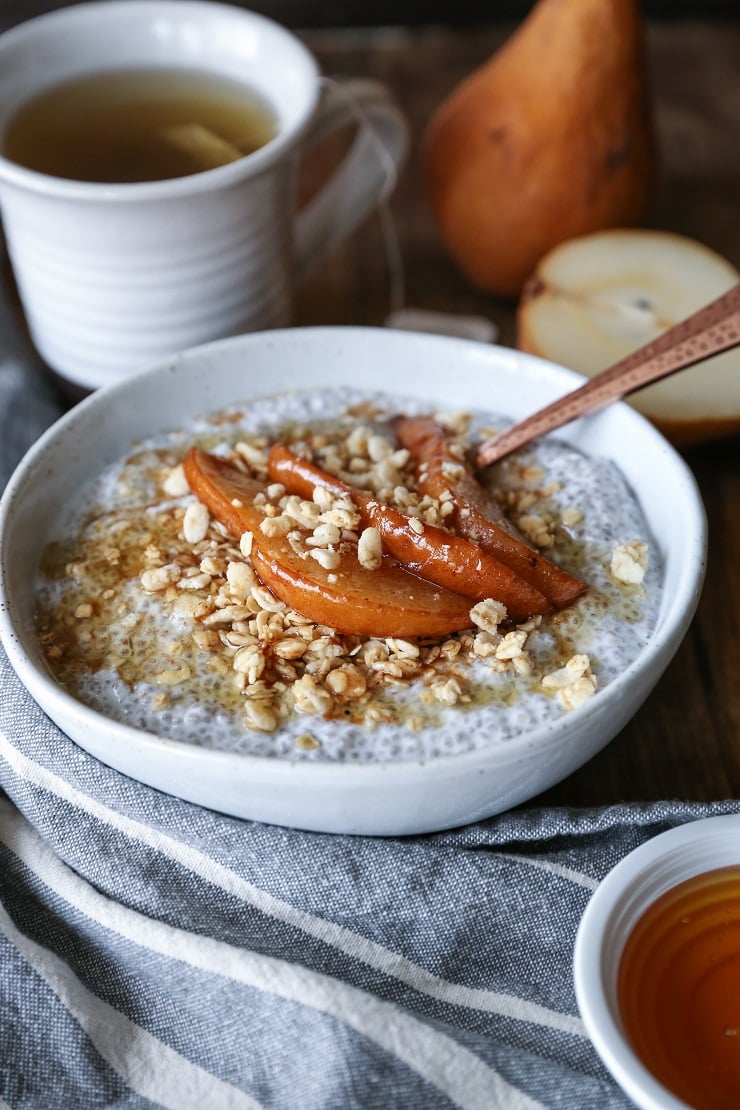 If you’re intolerant or allergic to dairy (or need to avoid it for any reason), stick with the all almond milk method, and if not, go half and half with yogurt and almond milk.

How to Make Chia Seed Pudding:

If you’re new to chia seed pudding, the concept is super simple.

Chia seeds absorb four times their weight in liquid, and become thick and gelatinous for a creamy, thick pudding-like mixture. All you need to prepare it is a large jar, some chia seeds, and any type of milk and liquid sweetener.

Combine all ingredients in the jar, give them a good shake, then wait overnight (or at least three hours) before digging in.

Get the full photo tutorial by checking out my post on How to Make Chia Seed Pudding in 3 Easy Steps.

You can top chia seed pudding with fresh seasonal fruit, roasted nuts, nut butter, or in this case: granola and caramelized pears.

You really can’t go wrong with such a simple recipe! To keep this recipe entirely paleo, you can top the pudding with my Paleo Granola.

If desired, use 1 cup of whole milk yogurt and 1 1/2 cups of unsweetened almond milk. Simply stir the two together until combined, and proceed as normal.

I used CoYo and grain-free seed granola and this was a delicious and decadent, yet healthy, breakfast. I have a lot of dietary restrictions and finding your recipes, which are so easily adaptable for my needs, is a blessing. Thank you!

Oooooh, I love CoYo! Great choice! I'm so glad you enjoyed the recipe. Thanks, Tricia! xo

You had me at caramelized pears. I become completely smitten with pears during the winter months. I love the application of caramelization.

I have a flu and I think this is the cure! :D

Chia for dessert is definitely much more my thing also...but I also kind of love that this can taste like dessert but ALSO be eaten for breakfast!

It looks so good but I hate those little chia seeds. Would it work to grind them up first?

Hi Barbara, you can blend the chia seeds with the liquid in a high-powered blender and allow it to sit overnight. It will still work and will turn out creamy. As an alternative, you can try my tapioca pudding recipe: https://www.theroastedroot.net/roasted-vegetable-quinoa-buddha-bowls/ if you like tapioca ;) Let me know if you have any other questions!