Bananas Foster Chia Seed Pudding: Because we may not have control over everything in life, but we certainly have power over how we eat our bananas. 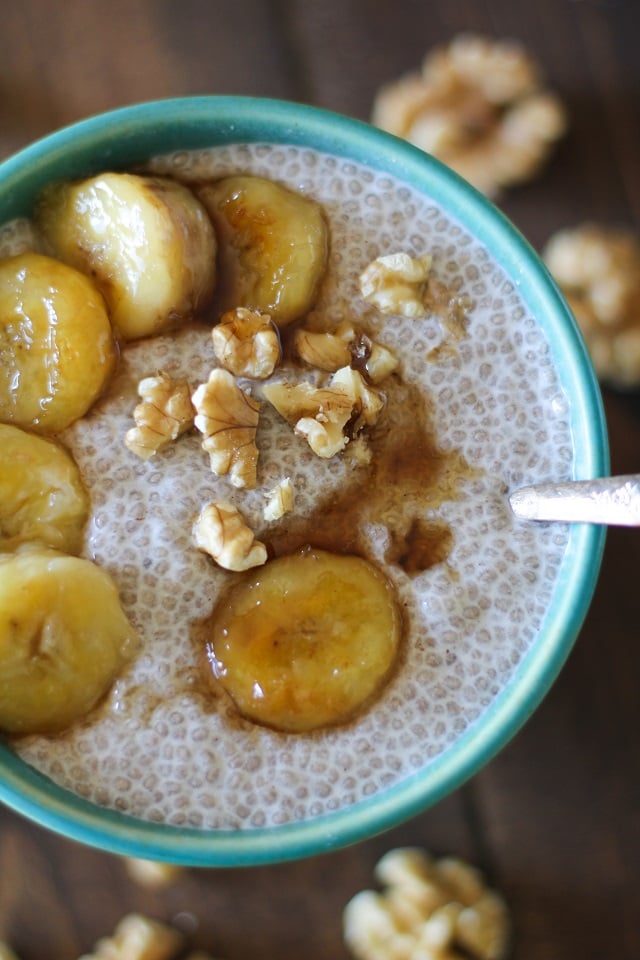 Wah wah wah waiiiiiiiit! Before you read every single word in this post, humor me and watch these Banana Boat commercials on the YouTubes.

Did you watch? Every last one of them?

Disclosure: this post is not sponsored by Banana Boat Triple Defence for Men…I just really like a good commercial that happens to relate to one single ingredient in my blog post.

Defy the sun with… 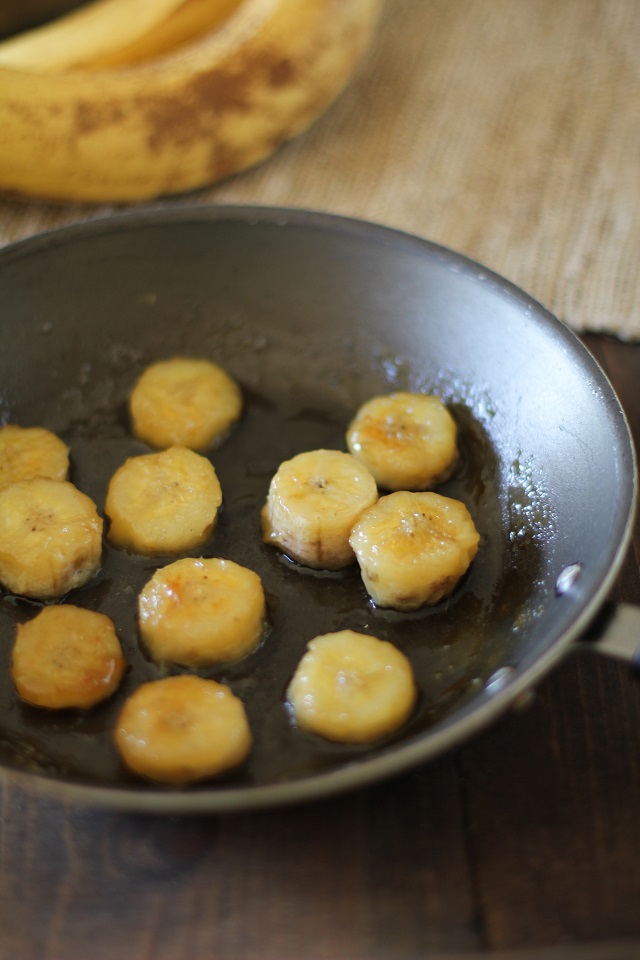 I have an important question for you. Who is Mr. Tally Man and is a Tally me banana as good as a banana foster? Better? Sub-par? I must know. Okay, that was two questions.

A beautiful bunch of ripe banana!

Up until making this recipe, my only experience with bananas foster was watching Paula Deen and other folks on the Food Network rave about it. Rum-spiced sweet, cinnamon-y caramelized bananas as a topping to an already delicious dessert? Don’t mind if I do! After watching in awe of the Food Networkians enjoying bites of what I would think is delightful decadence, I just knew I had to try it myself.

Defy the sun with… 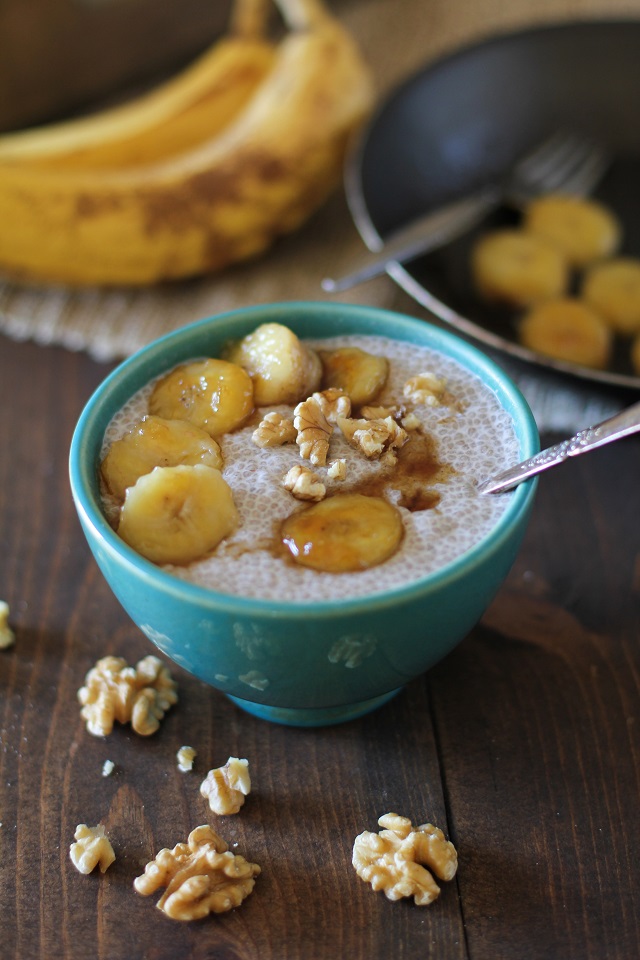 Normally, bananas foster is made with brown sugar, rum, nutmeg, and cinnamon. I replaced the brown sugar with pure maple syrup, which made the whole thing a super cinch to prepare. Basically, all you do is saute sliced bananas with the other fostering ingredients, and the whole thing takes like 8 minutes max. The aroma and flavor is so warm and inviting! And lemme just say: if you’ve never fostered a banana, you should totes foster a banana, smalls!

After posting my little tutorial on How to Make Legit Chia Seed Pudding, I had plenty of pudding in the ol’ refer to enjoy any which way. Whipping out the chia seed pudding to accompany some super stellar caramelized bananas was a pretty epic decision ifIdosaysomyself. Because there’s not a lick of refined sugar in the whole dang recipe and the pudding is made all light and fresco with almond milk, this bowl o’ delish is actually a bowl o’ nutrish as well <- could not stop myself.

So eat it for breakfast and dessert. And brunch and linner.

Take your chia pudding on a banana boat booze cruise! 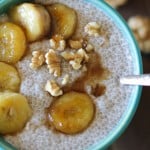 Bring it All Together: 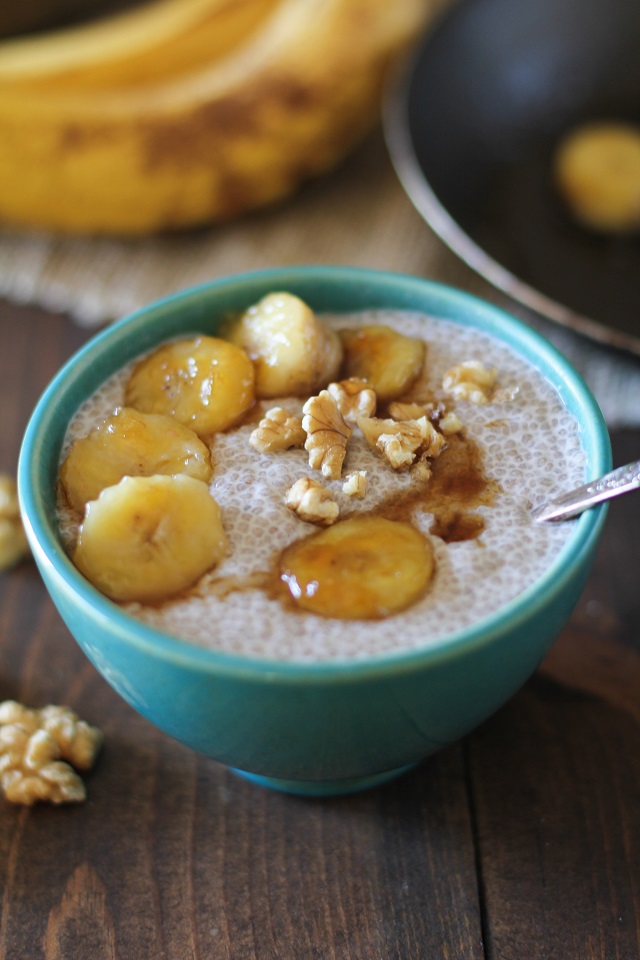 My Avocado Egg Salad recipe has been blowing up on