The first time I tried rice pudding, my whole world flipped upside down and sideways.

One of my best friends is from Bolivia, and back in our high school days, she would make a huge pot of arroz con leche (rice pudding) regularly for her whole family (myself included) to enjoy. We’d eat it warm, cold, with extra sugar or milk…any way we’d choose. Arroz con Leche became my favorite thing to eat and continues to be one of my favorite dessert recipes.

Homemade rice pudding is easy to prepare, and even easier if you make it in the Instant Pot or Crock Pot because you don’t need to continuously stir and monitor the rice pudding.

This crockpot rice pudding recipe requires nothing more than stirring all of the ingredients in a slow cooker then cooking it on High heat for a few hours.

The next time you’re looking for an impressive dessert recipe that everyone will love, whip up this gem!

Traditionally, rice pudding is made with short or long-grain rice, whole milk, cream, sugar, and sometimes cinnamon and raisins. In order to get the creamy pudding-like consistency, an egg is usually tempered in cream then added to the cooked rice.

Since we’re making this recipe silly simple in a crock pot, we can skip the egg altogether and rely on the coconut milk for thickness and creaminess. In this sense, it is easy to make dairy-free vegan rice pudding that anyone can enjoy.

If you’re an egg-tempering maven, feel free to reserve some of the coconut milk and heat it up to temper one whole egg or two egg yolks. Add it to the rice pudding 30 minutes before it has finished cooking.

Let’s go over the simple ingredients for this particular creamy rice pudding recipe in detail, as each one serves an important purpose.

Short Grain Rice: As mentioned above, short-grain white rice is the best rice to use for rice pudding. I have also used arborio rice (the same rice one would use to make risotto), as I find it has such amazing soft and plump texture.

While any type of rice, like basmati rice, one minute rice, or even brown rice will work, for the best result, stick with short grain white rice.

Full-Fat Canned Coconut Milk: Adding richness and creamy texture to the rice pudding while keeping it dairy-free, we use full-fat canned coconut milk. Coconut cream works for this creamy dessert too. I don’t recommend replacing the coconut milk with any other non-dairy milk like almond milk because it serves such a key role in bringing this slow cooker rice pudding recipe flavor.

If you aren’t dairy-free, replace the coconut milk with 4 cups of milk or a combination of milk and cream. I would recommend a combination of heavy whipping cream or half & half and milk, as the fat content is what makes this yummy dessert so irresistible.

You can do 3 cups of whole milk and one can of sweetened condensed milk for a traditional method.

For those of you who crave extra sweet in your sweet treats, feel free to go heavy on the pure maple syrup, or use one cup sugar such as brown sugar or regular granulated cane sugar.

For less added sugar, use your favorite sugar-free sweetener.

Pure Vanilla Extract: A little vanilla extract brings a warm flavor to the pudding, giving it a well-balanced flavor profile.

Rum or Brandy (Optional): I figured coconut milk and rum are like two peas in a pod, so I decided to add rum once the rice had finished slow cooking.

This give additional richness to the dessert without it tasting overly boozy. It just gives it that special je ne sais quois. Skip it if you don’t do alcohol.

Egg: Many cultures mix tempered eggs or egg yolks into the pudding at the end of the cooking process to help thicken it and to add richness and creamy texture. If you’re egg-free, skip the process of tempering the egg and adding it to the pudding.

Raisins: For my raisin lovers, add one cup raisins to the crock pot at the same time as the rest of the ingredients.

Cocoa Powder: Stir 1/3 cup of cocoa powder in at the end of cooking for chocolate rice pudding. I also recommend increasing the sweetener if you add cocoa powder.

Butter: If you aren’t dairy-free stir in 2 to 3 tablespoons of unsalted butter at the end of the cooking process.

What Type Of Rice To Use For Rice Pudding?:

What is the best type of rice for rice pudding? Short grain white rice is generally recommended, although you can get away with using other types of white rice including long grain rice like jasmine rice.

As it turns out, the Sri Lankan version of rice pudding incorporates coconut milk, which is the approach we’re taking with this recipe.

You can also add raisins, which plump up during the slow cooking process, and can serve the pudding with chopped nuts and/or fresh fruit.

Plug in your crock pot and spray the bottom and sides with cooking spray. This makes for easier cleanup once the pudding has finished cooking.

Transfer the uncooked rice to the crock pot, along with the coconut milk, water, ground cinnamon, cinnamon sticks, and sea salt.

Give everything a big stir.

Secure the lid on the slow cooker and slow cook on High heat for 3 to 4 hours or until it reaches your desired consistency If you’re able to stir the pudding a few times throughout the cooking process, feel free to do so.

Once the rice pudding is nice and thick, stir in the pure maple syrup, rum, and the vanilla extract and taste the pudding for flavor. Add more sweetener if you’d like.

Transfer the rice pudding to an airtight container and refrigerate until completely chilled. You can also serve rice pudding warm fresh out of the crock pot, which is what I often do.

Typically rice pudding is served cold, so be sure to take into account the chill time if you’re serving it cold.

Store any leftovers in an airtight container in the refrigerator for up to one week.

Note: If you’re savvy with tempering eggs, temper one egg with a little of the rice pudding mixture and add it to the crock pot after the rice has been cooking for 2 and a half hours.

Cover the crock pot again after adding the egg mixture and cook for an additional 30 minutes on high heat.

How Long to Cook Rice Pudding in the Crock Pot:

For the best result, cook rice pudding on High heat for 3 to 4 hours in the slow cooker.

I have had success cooking rice pudding on Low Heat for 8 hours, although the results seem to vary with low heat because the low setting on crock pots can vary. For this reason, I recommend sticking with High heat for 3-4 hours.

And that is all! Enjoy this slow-cooker rice pudding recipe when you’re entertaining family and guests for a comforting dessert.

If you’re looking for more easy recipes for delicious desserts, check these out!

Set it, forget it, rice pudding for breakfast!

1. Plug in your crock pot and spray the bottom and sides with cooking spray. This makes for easier cleanup once the pudding has finished cooking.

2. Transfer the uncooked rice to the crock pot, along with the coconut milk, water, ground cinnamon, cinnamon sticks, and sea salt. 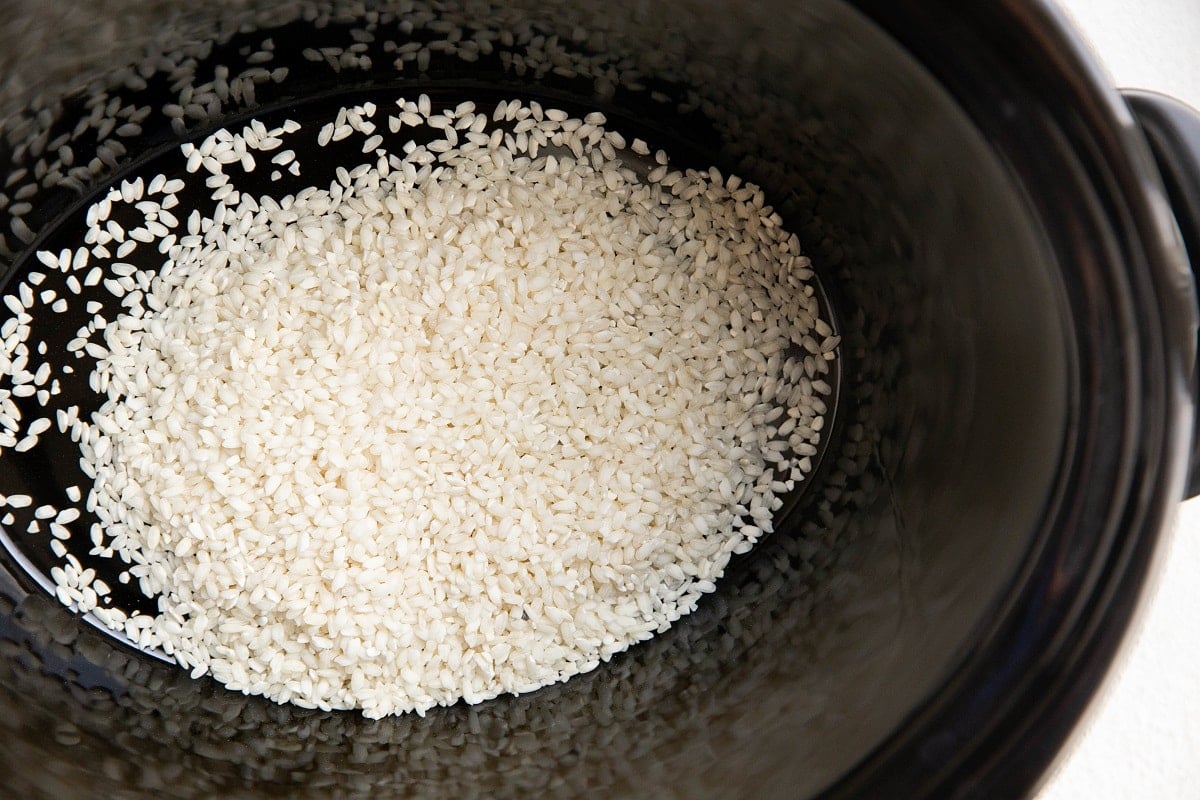 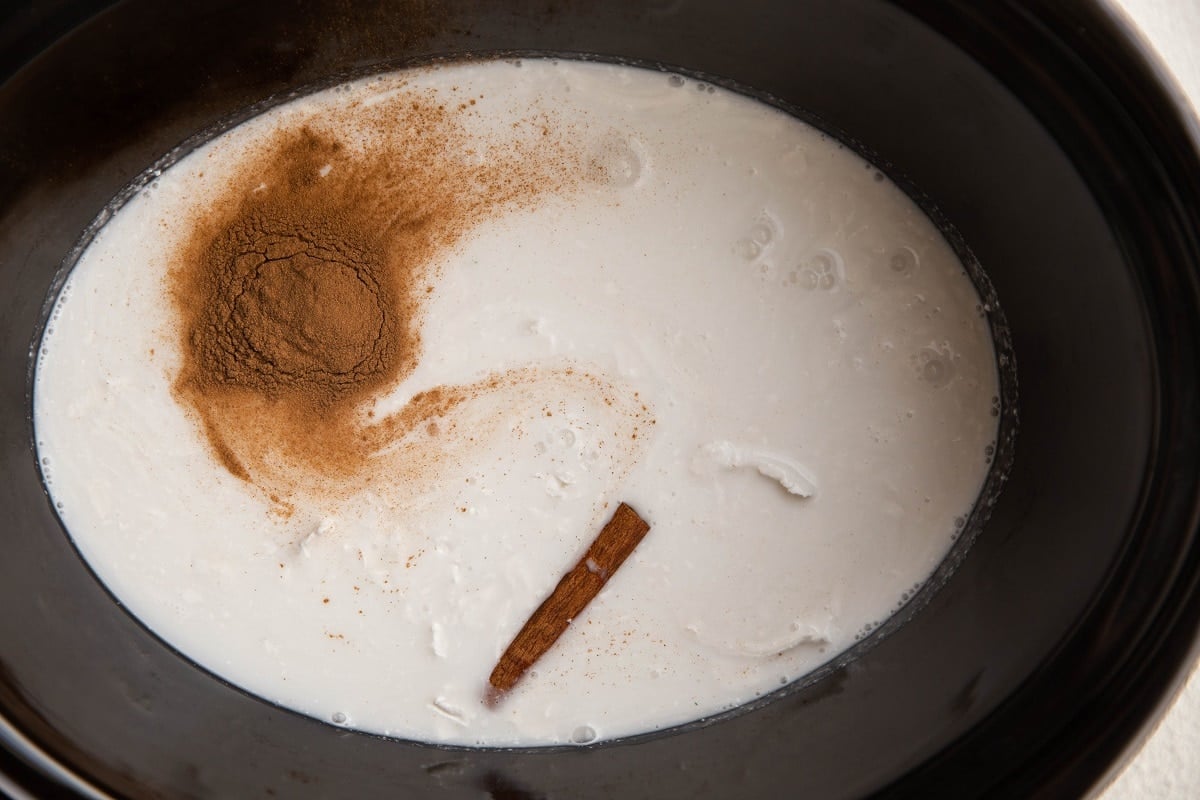 Give everything a big stir. 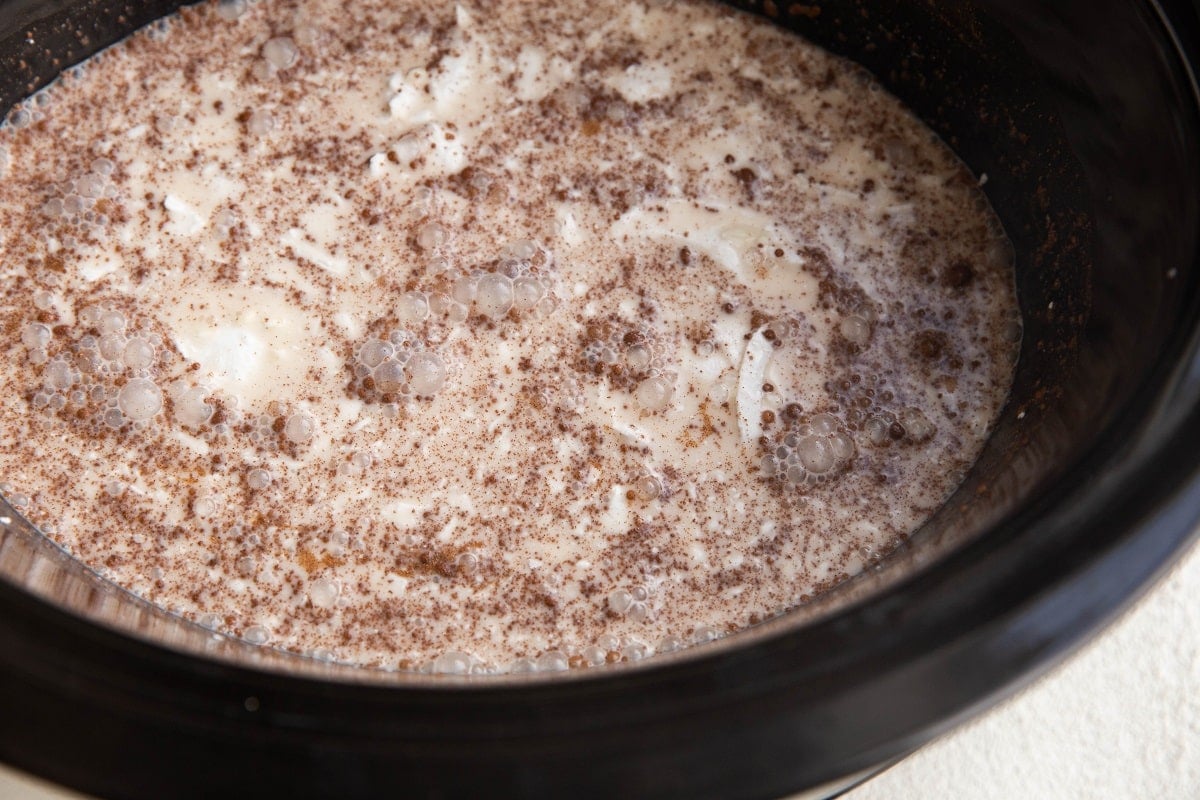 3. Secure the lid on the slow cooker and slow cook on High heat for 3 to 4 hours or until it reaches your desired consistency. Stir the rice pudding once every hour if you are around to do so. 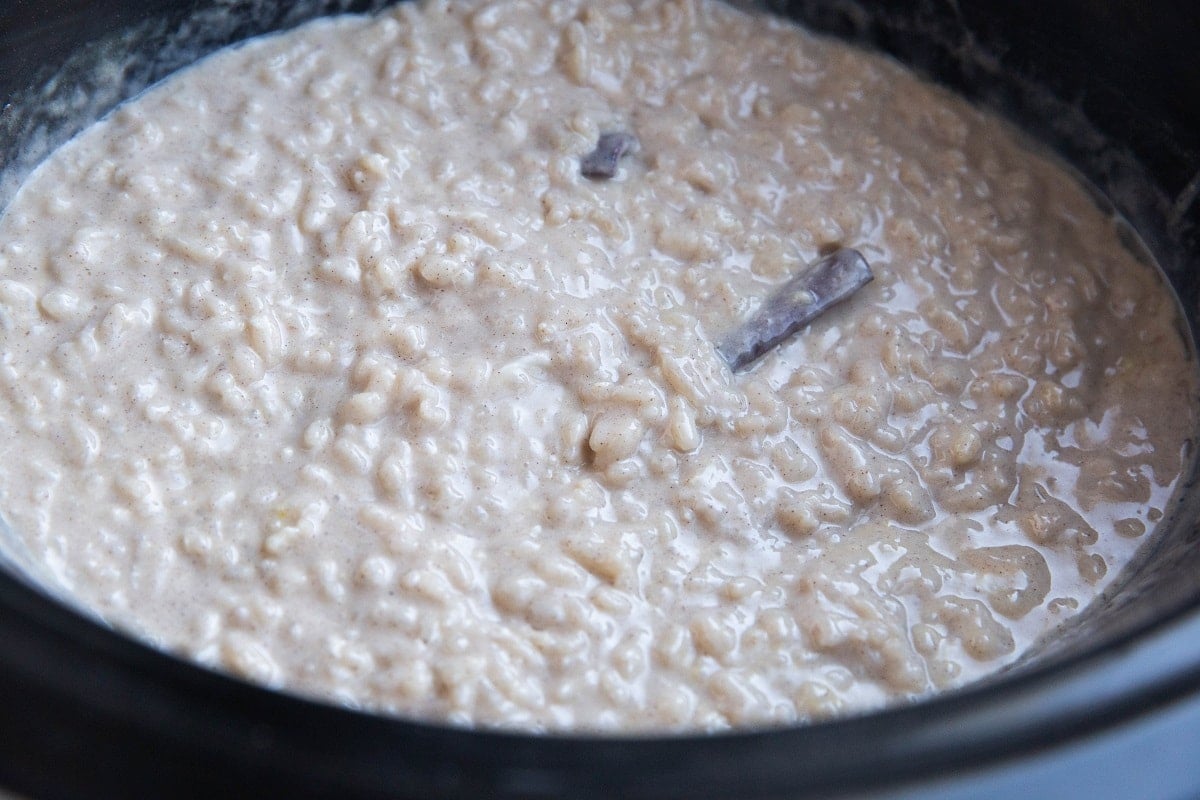 5. Serve either hot or chilled. 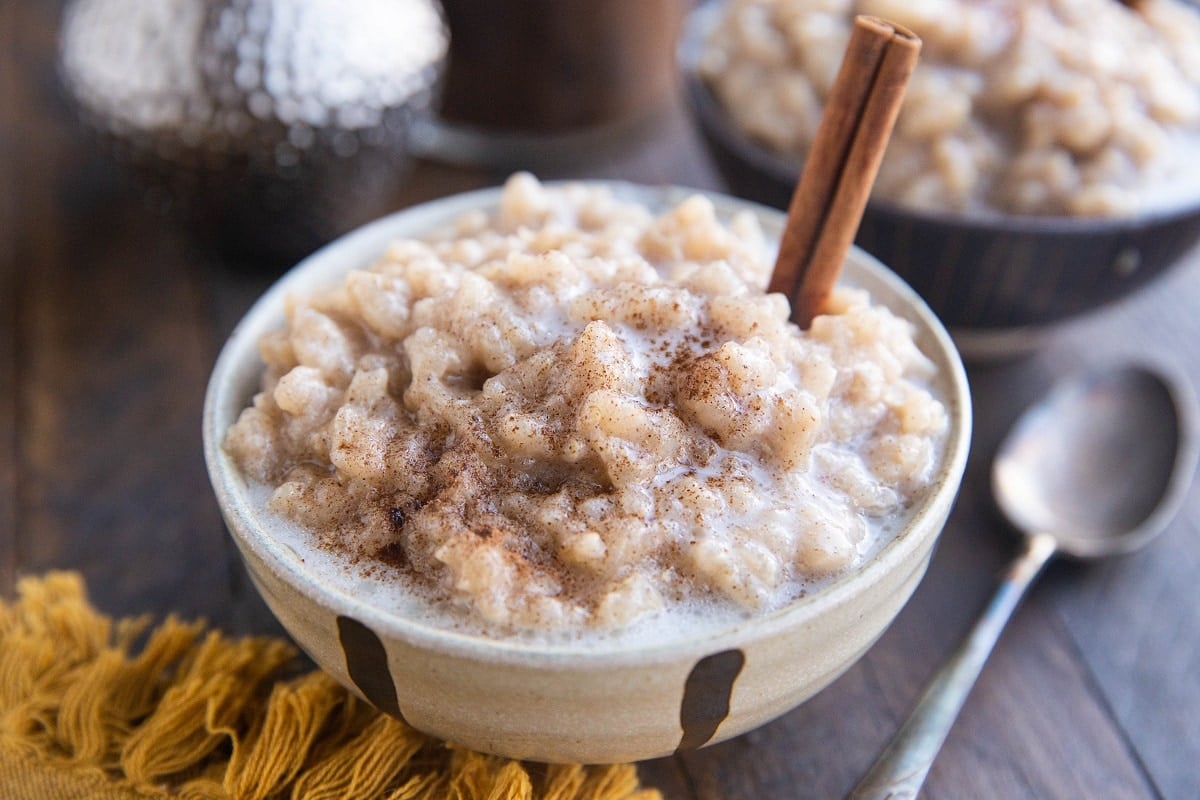 *I use arborio rice but any type of short grain white rice will work.

**The way this recipe is written, the pudding turns out slightly sweet, but not very sweet. If you like a sweeter treat, increase the pure maple syrup or add some brown sugar or granulated sugar.

You can cook rice pudding on Low Heat for 6 to 8 hours, stirring every couple of hours, or until the pudding reaches your desired consistency.

Store leftover rice pudding in a sealed airtight container in the refrigerator for up to 10 days.

If you'd like to add one egg at the end of the cooking process, temper it with some of the rice pudding mixture or warm coconut milk after the rice has been cooking 2.5 hours. Stir the tempered egg into the rice pudding, then cook on high heat for another 30 minutes to 1 hour.

This recipe was originally published October 19, 2015. I added more information to the post, re-photographed the recipe, and made a couple small changes to the recipe.

Can you make this with leftover white rice? What changes would I need to make? Less coconut mild probably.

Hi Mary! If you use leftover rice, I would just make it on the stove top because it will go super quickly. All you'll need is 3 cups of cooked rice, 1 1/2 cups to 2 cups of full-fat coconut milk, about 1/2 tsp to 1 tsp ground cinnamon (whatever tastes good to you) and a sweetener to your personal taste (I would do 3 tablespoons of pure maple syrup). Heat it all up in a saucepan on the stove top until it's warm! Enjoy!

Made this today and it is delicious! Love that it is vegan and gluten free. I put my crockpot on low, but unfortunately became busy visiting with my mom and it turned into mush around hour 4! I guess my crockpot is hot. Now I know for next time. So make sure you are checking regularly.

Made this yesterday. It was delicious despite my having forgotten to add the vanilla. This was a family tradition at my grandmother's for every special occasion. Think I will revive it in my home. Thank you so much. This taste very close to the egg and milk variety I grew up with

I made this recipe and the rice came out very crunchy. What did I do wrong?

Can you use Almond Milk in place of dairy milk?