Instant Pot Rice Pudding recipe made dairy-free with minimal pantry ingredients. This easy rice pudding recipe is vegan (no eggs required!) and requires hardly any effort to prepare in the pressure cooker. Plus, is thick and creamy and the perfect dessert to share with the whole family.

If you’re like me and you’re positively obsessed with rice pudding, I have the ultimate treat for you.

This easy recipe includes instructions on how to make traditional rice pudding (or arroz con leche) using milk and condensed milk for the classic approach.

Many countries have their own take on rice pudding.

For instance, arroz con leche in Mexico and South American countries, Kheer in India, Philippino Biko, and Guatemala, Japan, Sweden, Germany, Newfoundland, Greece, and Portugal all have a unique take on the dessert.

The classic rice pudding recipe changes from culture to culture depending on the type of rice and the liquid used to cook it. In addition, different cultures have their own unique way of of serving this classic comfort food.

In case you have never tried rice pudding, I’ll give you the quick run down.

What is Rice Pudding?:

Classic rice pudding is made with white rice, milk, sugar, cinnamon, and sometimes raisins. The pudding has a thick texture from the combination of milk and starch from the rice in addition to a bit of a chewiness. You could compare the concept to tapioca pudding, but with rice instead of tapioca pearls.

While rice pudding is traditionally made on the stove top, preparing it in the electric pressure cooker is one of the easiest ways as it saves cooking time and also eliminates any guesswork.

Basically, the Instant Pot version requires zero technique. A win for all those times you’re craving a quick and easy dessert.

Rice pudding is traditionally served chilled, but it can also be served warm. I recommend preparing the recipe in advance to allow for chill time.

After making rice pudding a couple of times, you’ll discover your favorite way of serving it and uncover the types of milks and sweeteners you prefer.

In order to make dairy-free rice pudding, I use full-fat canned coconut milk and use pure maple syrup instead of sugar. I have provided options to change up the milks and sweeteners later in the post.

Rice pudding is so incredibly easy to make and is fun to share with friends and family, AND it is even easier to make it in the Instant Pot than the stove top.

Creamy rice pudding is a wonderful dessert that can be enjoyed any time of the year, and it is great option for celebrating during the winter holiday season and Cinco de Mayo (although be sure to call it “arroz con leche,” or in this case, “arroz con leche de coco.” 😉

Let’s discuss the simple ingredients for this easy recipe.

White Rice: You can use any kind of white rice to make rice pudding. Long grain white rice or short-grain rice are the most common. For this particular recipe, avoid using arborio rice, instant rice, or brown rice, as they need different preparation instructions to get the right consistency.

Technically any kind of rice will work, including Jasmine rice and sushi rice, but I recommend using a standard long-grain rice for the best result and the perfect texture.

The full-fat canned coconut milk makes the pudding extra creamy and decadent. If you don’t follow a dairy-free diet, you can use whole milk.

Pure Maple Syrup: For sweetening the rice pudding, I use pure maple syrup. You can also use coconut sugar, maple sugar, or coconut palm syrup. If you cook with cane sugar, feel free to use brown sugar or granulated sugar.

Ground Cinnamon: This thick and sultry rice pudding is made so nice and flavorful with the addition of cinnamon. Be sure to not skip it! It provides warm flavor and a counterbalance to all the creaminess.

Cinnamon Stick: I wholeheartedly believe rice pudding should be made with a cinnamon stick in addition to ground cinnamon, but this is an optional ingredient. It adds more cinnamon flavor, but also a freshness that is difficult to put into words. If you don’t have one on hand, skip it.

Sea Salt: A pinch of salt enhances all of the flavors of the pudding and gives it an unparalleled richness. Be sure to include it!

That’s it! All ingredients you likely have on hand in your pantry – no eggs required!

Now that we’re familiar with the ingredients and possible substitutions, let’s make the best rice pudding!

If you’re anything like me and get impatient when you’re craving a sultry dessert, you’ll love the fact that this luscious pudding will be ready in less than 30 minutes using the electric pressure cooker.

How to Make Rice Pudding:

Add rice to a bowl or pot and cover with water. Soak 5 minutes, then drain. You can also rinse rice several times in addition to soaking it.

Transfer the soaked rice to the Instant Pot along with one of the cans of coconut milk, water, pure maple syrup, ground cinnamon, cinnamon stick and sea salt.

Stir well until ingredients are combined.

Secure the lid on the pressure cooker and press Manual or Pressure Cook. Adjust the cooking time to 10 minutes and pressure cook on high pressure, leaving the valve sealed.

Once the Instant Pot has finished running its course, allow it to naturally release for 10 minutes. Once the 10-minute natural release has finished, manually release the remaining pressure by opening the steam valve.

Open the lid and give it a good stir. Pour in the second can of coconut milk and pure vanilla extract.

Either serve rice pudding hot immediately or transfer to tupperware and chill in the refrigerator. Note: rice pudding is traditionally served cold. Serve cold with a drizzle of coconut milk and a sprinkle of ground cinnamon.

How to Make Rice Pudding Using Milk and Condensed Milk:

If you’re looking for a traditional approach to rice pudding or arroz con leche, here’s what you do.

When cooking the rice pudding in the pressure cooker, use 2 cups of whole milk instead of 1 can of full-fat coconut milk and swap the pure maple syrup for 3 tablespoons of cane sugar or brown sugar.

You will still pressure cook on high for 10 minutes then naturally 10 minutes. Release remaining pressure using the quick release valve, then open the lid.

Add in one can of sweetened condensed milk instead of adding the can of coconut milk.

Either serve arroz con leche hot immediately or transfer to an airtight container and chill in the refrigerator. Serve cold with a drizzle of cream or milk and a sprinkle of cinnamon.

Fresh fruit such as sliced bananas, berries, pineapple, or mango are marvelous on rice pudding for a decadent easy dessert.

Can I Make Rice Pudding in a Crock Pot?

And that’s it! The best rice pudding that is rich, creamy, perfectly sweet and results in perfect texture every time.

This creamy Instant Pot rice pudding saves time and is here any time the craving strikes.

If you’re looking for more delicious recipes for delicious desserts, check out my other healthy pudding recipes.

Enjoy this pudding for breakfast…with a fried egg and side of bacon. Kidding. But serious. 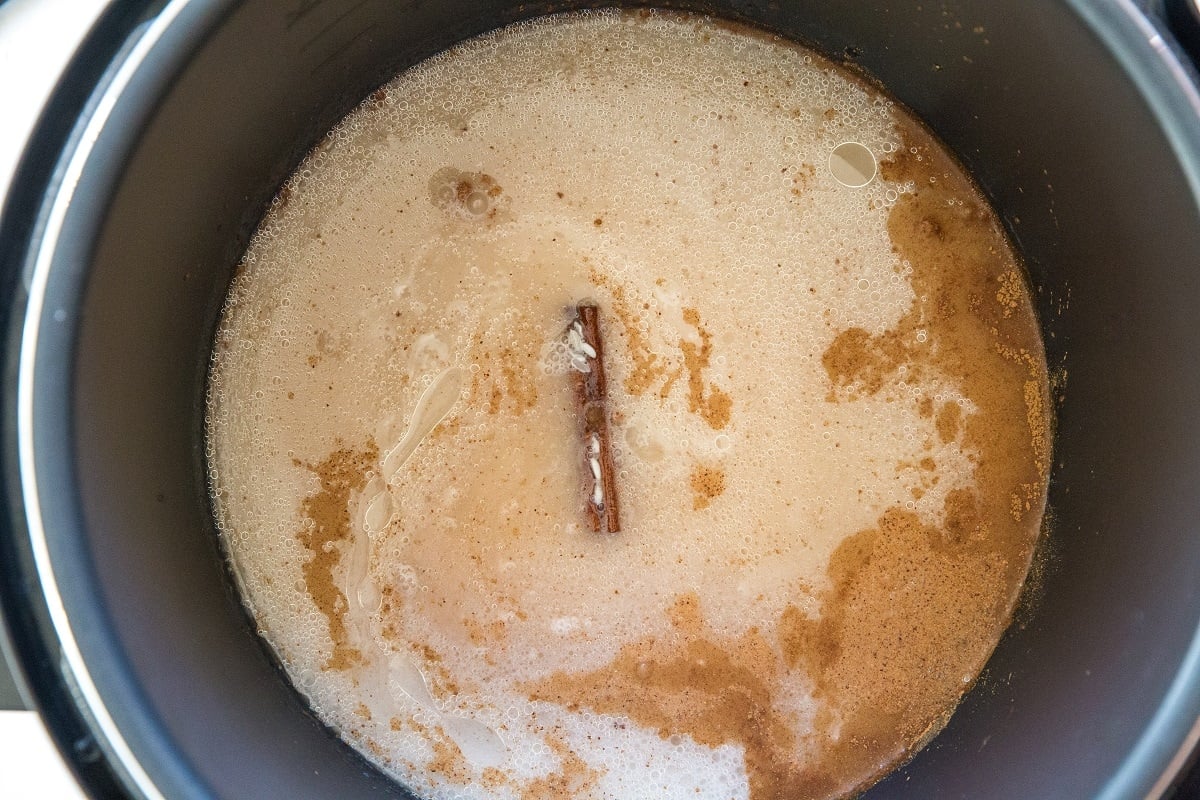 3. Secure the lid on the pressure cooker and press Manual or Pressure Cook. Adjust the time to 10 minutes and pressure cook on high, leaving the valve sealed. Once the Instant Pot has finished running its course, allow it to naturally release for 10 minutes. Manually release the remaining pressure by opening the steam valve.

4. Open the lid and stir. Pour in the second can of coconut milk and pure vanilla extract. 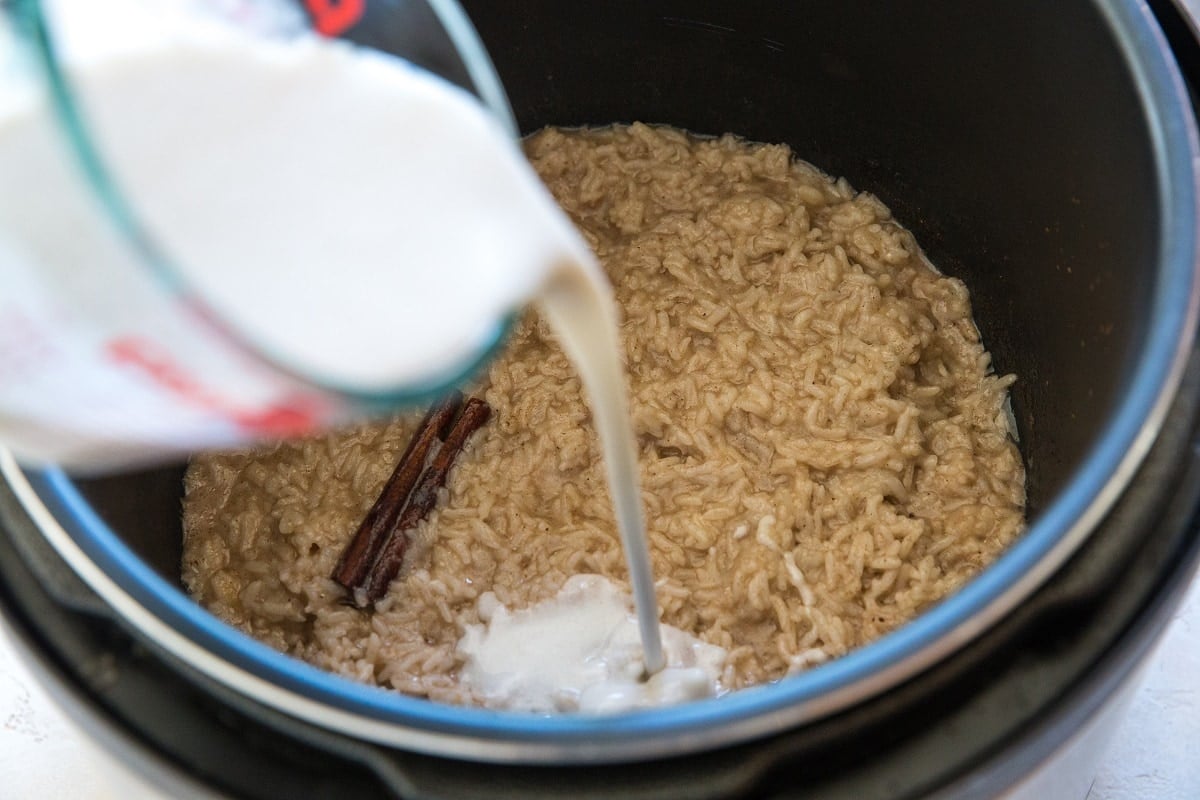 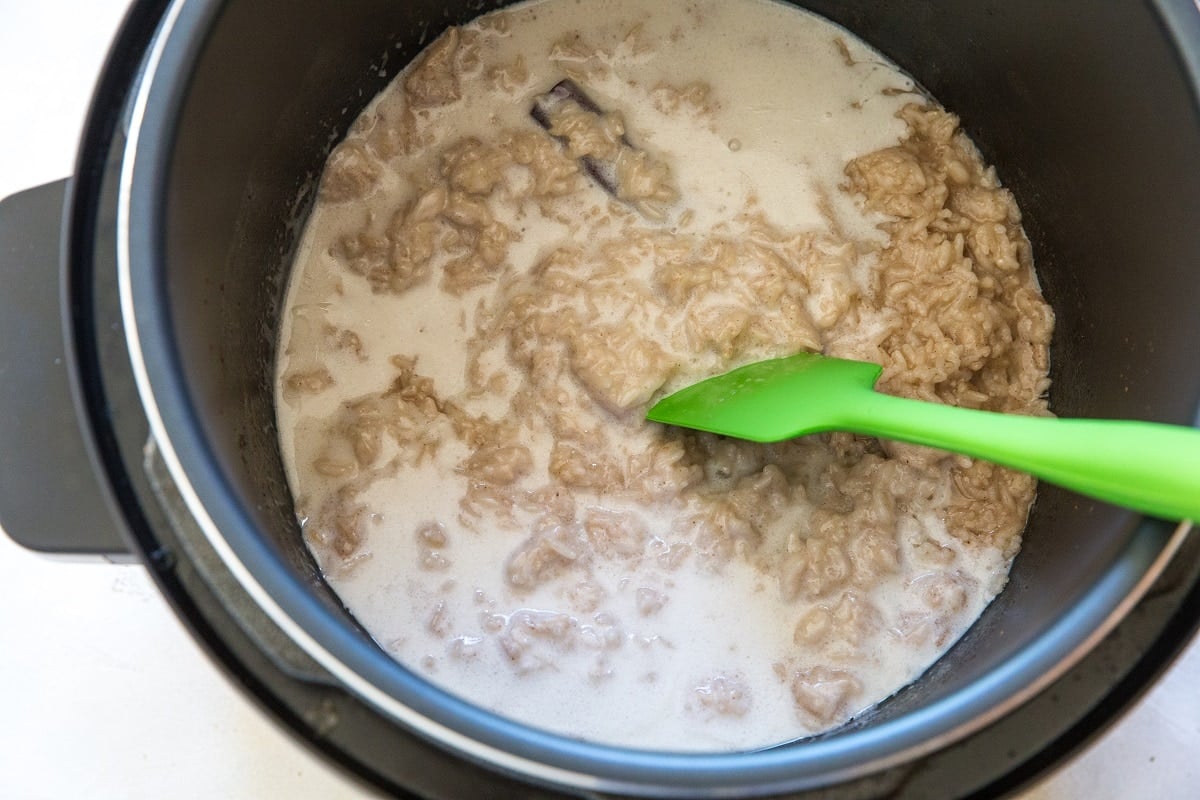 6. Either serve rice pudding hot immediately or transfer to an airtight container and chill in the refrigerator. Note: rice pudding is traditionally served cold. Serve cold with a drizzle of coconut milk and a sprinkle of ground cinnamon. 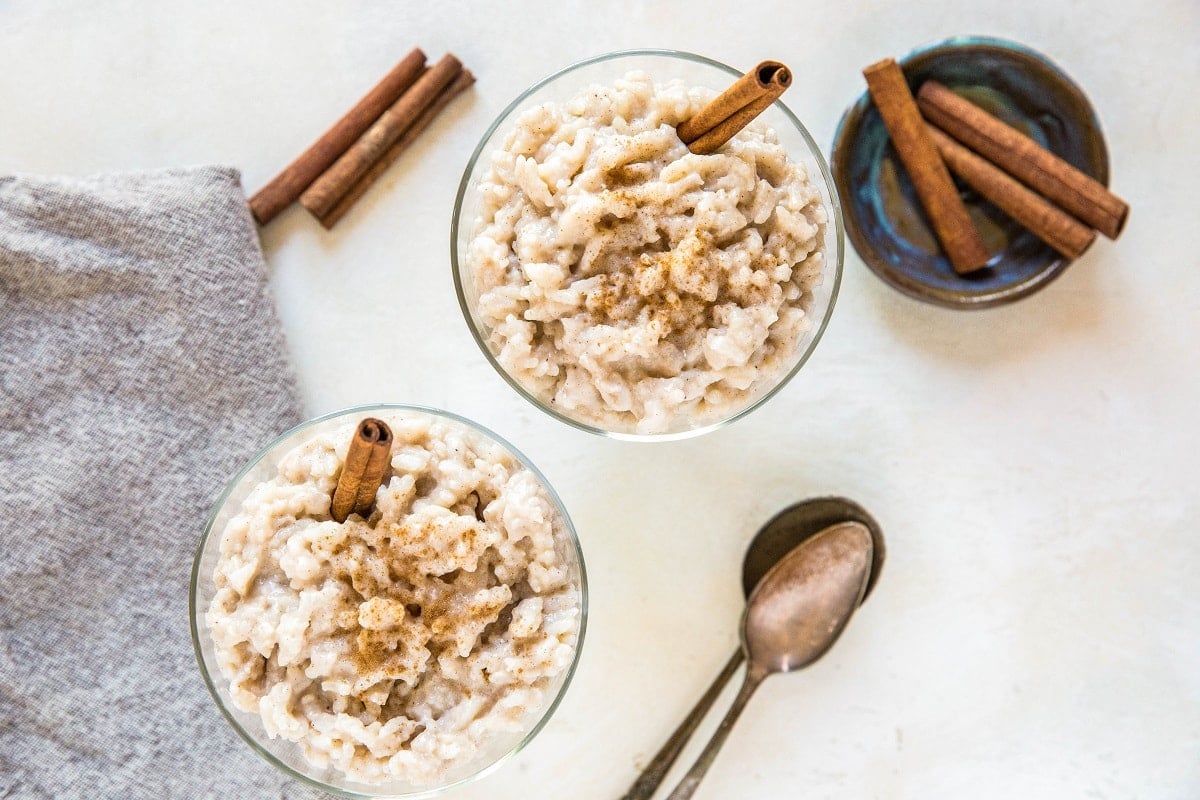 If you make this recipe, please feel free to share a photo and tag @The.Roasted.Root on Instagram!

This recipe was originally shared on May 5, 2020. I updated some of the information and photos but left the recipe the same.

My husband LOVES this rice pudding! We make this all the time! We've made this for gatherings and everyone comments on how delicious it is!

I'm so thrilled to hear it, Deidre! It's a household favorite for us, too! xo

Made it tonight and it's delish!

So happy you enjoy it, Heather! xoxo

Super tasty!! I used half the maple syrup to make it a little healthier and had it warm for breakfast. Curious to try it cold!

I'm so happy you enjoy it! Hope you love it cold as well :) xo

Doubled the recipe and used brown sugar since I didn't have maple syrup. Sooooo good

Oooh, I love it! I'm happy you enjoyed it! xoxo

I have been looking for this recipe since the day I receivied my Instant Pot! It is delectable and exactly the creamy goodness I had hoped for. Followed instructions and it came out just right.

I'm so thrilled to hear it! Thanks for letting me know, June! xoxo