This easy creamy, thick and amazing dairy-free chowder recipe can be made any time of year! Use canned corn on the off season, and fresh corn during corn season! 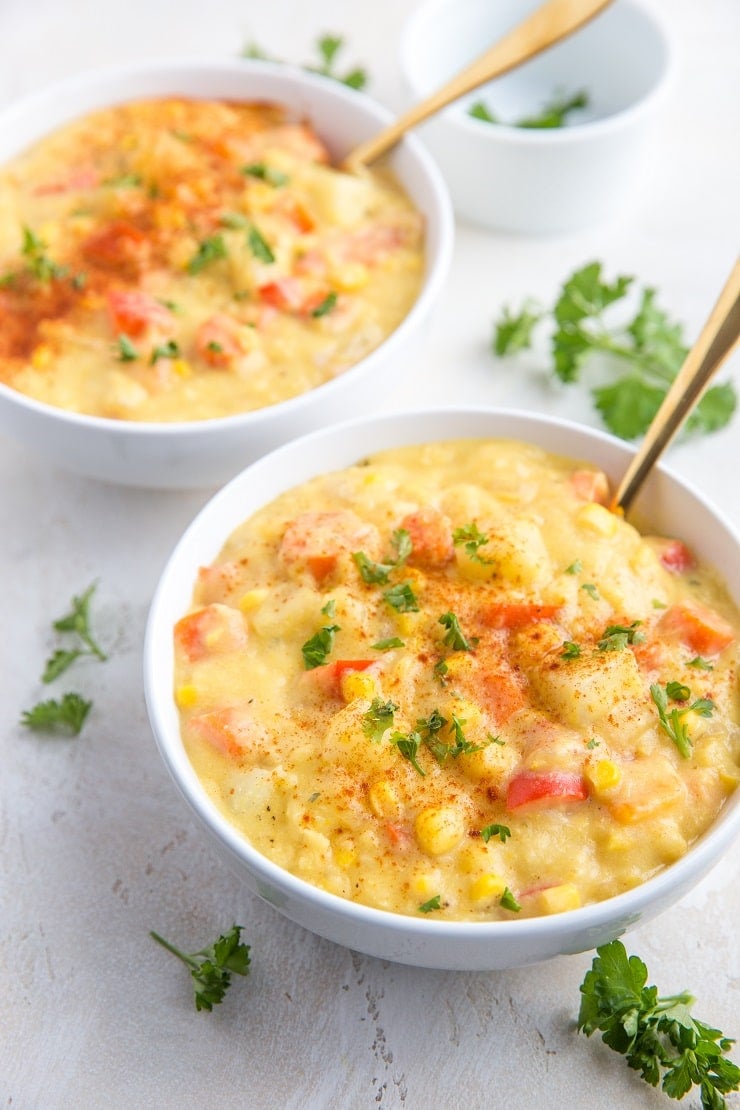 Up until I started making homemade chowder a few years ago, me of all people!

Confession: I used to be the biggest of chowder naysayers that ever did live. When I was little, my siblings would go wild over the clam-chowder-in-a-bread-bowl situation, especially when we visited San Francisco. I couldn’t for the life of me figure out why the stuff turned my stomach in knots…until…

Flash forward a couple decades, and come to find out it was because the cream and gluten content of the soup made me feel like less than stellar. Too much cream and gluten for this girl = bellyache = bad mood juju. Even the slightest whisper of the word, “chowdah” wrecked havoc on my digestive tract.

A few years ago, one of my brothers started making his own clam chowder, complete with bacon and potatoes for hearty splendor. He goes with a thinner (not roux-based) consistency and less cream.

Not only could I enjoy his homemade clam chowder without feeling sick, but it inspired me to work my own magic in the substitutions department. Nothing like a big brother to draw you a map to the Eightfold Path of Chowder Enlightenment.

I know, I know…it’s hard to believe something so seemingly fun-less could be so good, but you guys, it truly is. This hearty vegan corn chowder is amazing during the cooler months and happens to be the most delicious corn chowder I’ve tried!

Plus, it won’t make you curl up in a food coma and beg the chowder higher-ups for forgiveness and the whole family will love it! 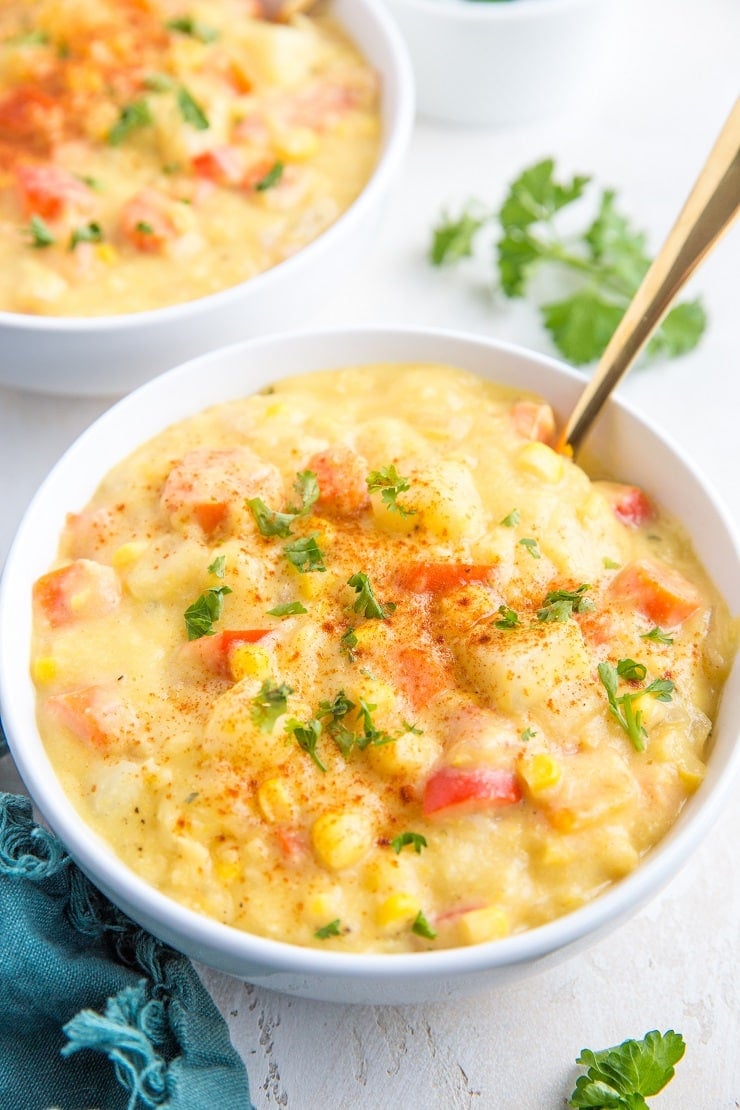 How to Make Gluten-Free Dairy-Free Chowder:

As it turns out, you don’t need cream, butter, and flour in order to make chowder. You can replace regular flour with a gluten-free all-purpose blend, use a vegan butter replacement, and/or substitute coconut milk for the cream.

As strange as it may seem in its cream-less, chicken-less, bacon-less glory, this veggie-packed dairy-free, gluten-free version of corn chowder is hands down the best batch corn chowder I’ve ever made. 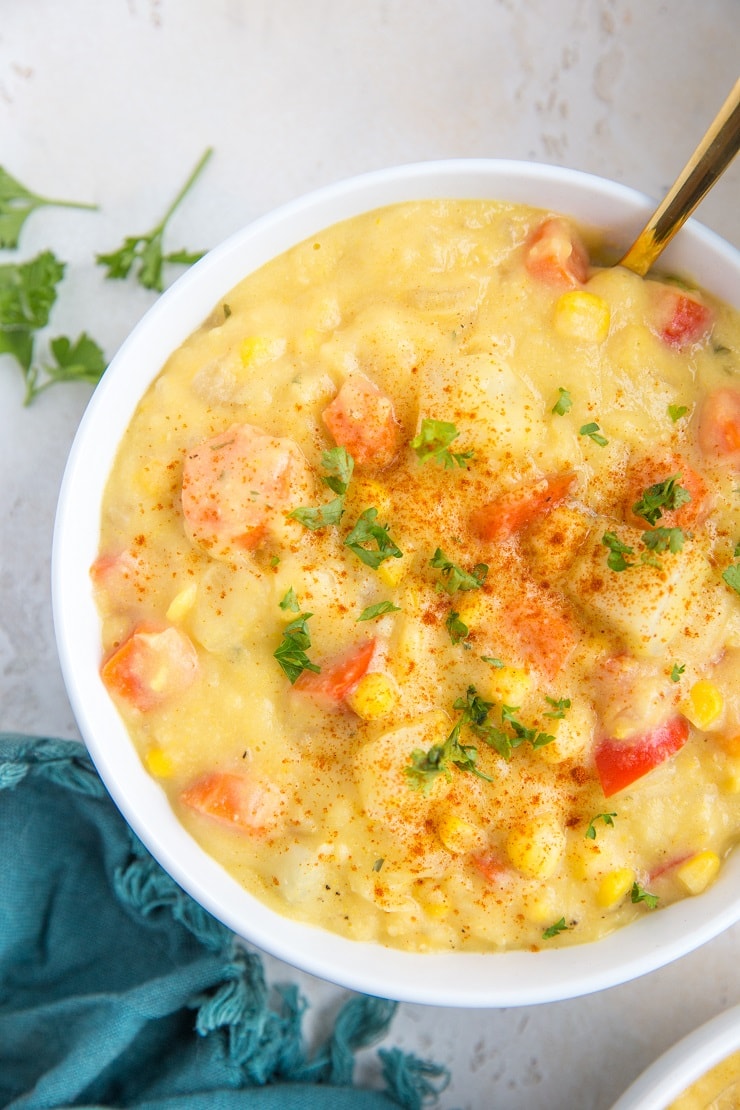 The key to making this chowder sweet, thick, and creamy is to cook one of the red potatoes and blend it with half of the cooked corn kernels and the coconut milk. This makes for a chowder-y consistency without having to tap into the butter and flour to make a roux.

The other red potato gets chopped up and cooked with the veggies in order to make the soup nice and chunky and hearty.

Similarly, the other half of the corn kernels go into the soup – I like keeping long strips of corn to make for the optimal big bite. I hope that all makes sense – holler at your girl if you need clarification on the prep method.

Note: If you don’t have access to fresh corn, you can use 3 cans of corn. You don’t even need to drain them before using! 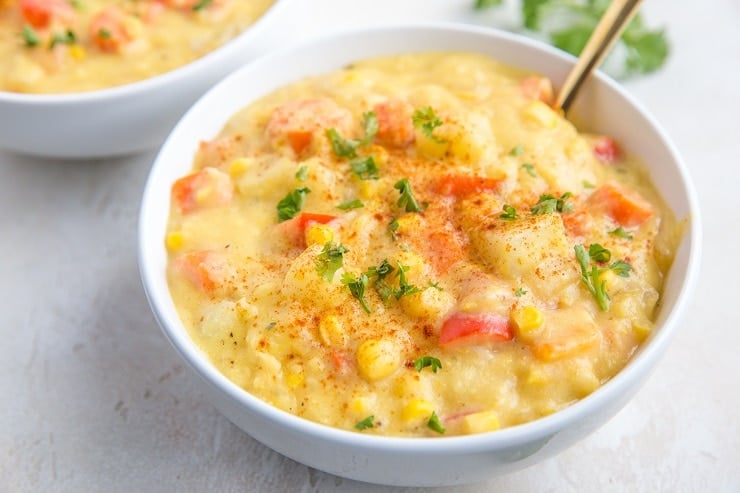 Fresh Sweet Corn: The star of the show! I always recommend using fresh when possible, but during the off season, you can absolutely use canned corn! If you use canned corn, you can do as I do and not drain the corn before using it. The liquid adds natural sweetness and can be used in place of broth.

Red Potatoes: Potatoes serve two purposes in this recipe: 1.) one potato takes the place of cream and flour for the chowder (thick broth) mixture and gets blended in a blender with some coconut milk, corn, and broth. This ensures you get that silky-smooth, creamy, thick and satisfying chowder without all the dairy and gluten! 2.) one potato gets chopped and added to the soup for texture and that comforting appeal.

You can also use Yukon gold potatoes! Some folks have used jewel yams to make this recipe instead of red potatoes and have reported it works marvelously.

Coconut Milk: Full fat coconut milk takes the place of dairy milk to help make the chowder nice and rich and creamy! I recommend sticking with full-fat canned coconut milk or coconut cream, although you can use light coconut milk for a lower calorie version. I don’t recommend using almond milk as you’ll lose the rich savory flavors. The end result is the chowder is naturally sweet and rich creamy corn chowder packed with corn flavor, yet healthful!

As an alternative, you can go with cashew cream by blending a cup of raw cashews that have been soaked with 1 cup of water

Vegetables: Onion, garlic, carrots, and red bell pepper provide all sorts of flavor, hardiness, and color to this vibrant meal! I have also added celery in the past and I prefer the corn chowder without celery; however, if you’re a huge fan of it, add 2 or 3 stalks! If you want to get creative, consider adding other vegetables, like cauliflower, poblano pepper, or sweet potatoes.

Seasonings: This chowder is naturally sweet, rich and creamy all on its own, but you can add even more flavor by tossing in some black pepper, Cajun seasoning, garlic powder, paprika, chili powder and/or cumin. This combination gives a tiny smoky flavor and the slightest heat to offset the sweet. I love the chowder both with or without these seasonings. Be sure you add sea salt to taste!

Liquid: For the broth/chowder mixture, we need some liquid. I typically use water, but you can also use a few cups of vegetable broth (or chicken or beef broth if you aren’t vegan). You can also use more coconut milk for added richness. Options galore!

You can add in some red wine vinegar, lime juice, lemon juice, or nutritional yeast for some added tang for an almost cheesy flavor to this corn soup. 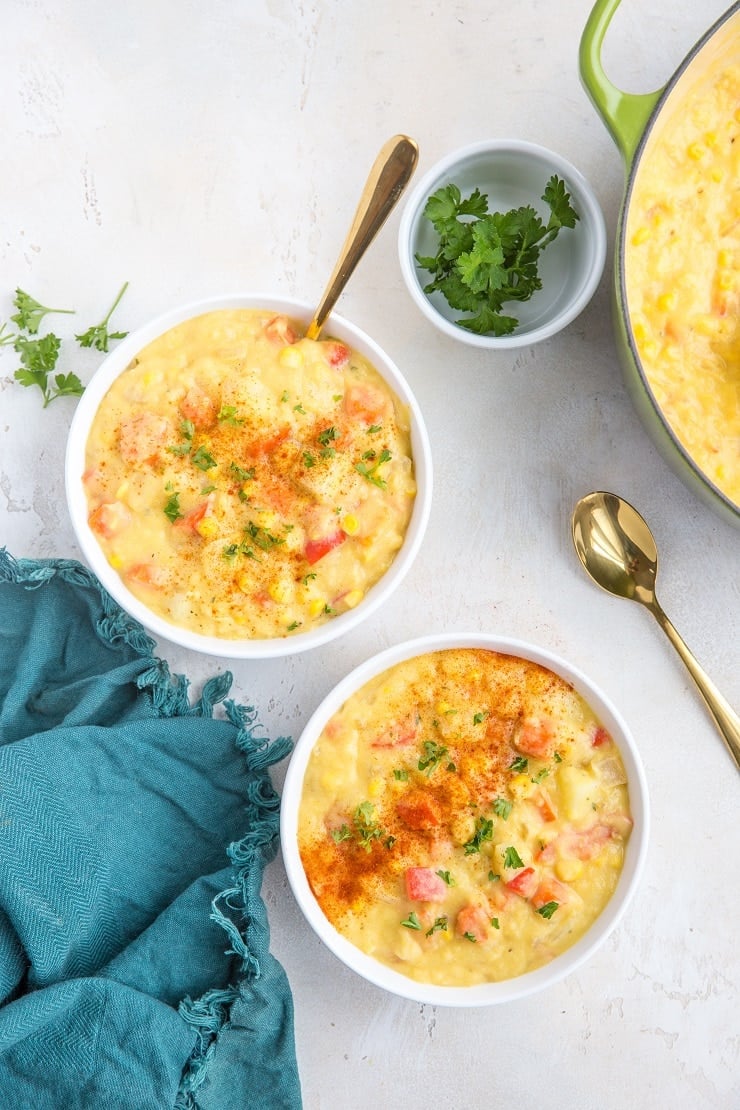 How to Make Vegan Corn Chowder:

If you’re using fresh corn, remove the husks and boil them for 5 to 8 minutes, or until they turn puffy and are cooked but not over-done. Transfer the corn to a cutting board and allow them to cool while preparing the rest of the recipe.

Peel and chop both of the red potatoes in quarters and carefully place it into the same large pot of boiling water you used to cook the corn. Allow potatoes to cook until soft, about 10 to 15 minutes. Transfer the cooked potatoes to a cutting board and chop one of them into smaller chunks. This one will be added to the chowder, and the other potato (larger chunks) will be blended into a broth with the corn. 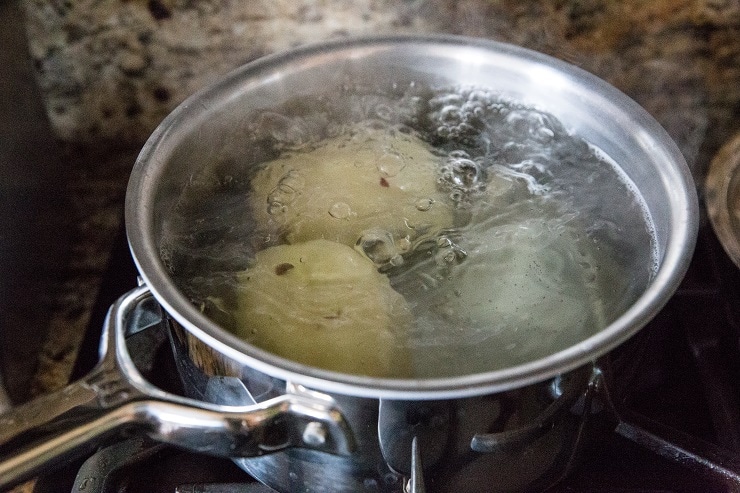 Heat the olive oil or avocado oil in a large stock pot (I use my Dutch oven) over medium-high heat. Add the chopped onion and sauté, stirring occasionally, until onion is beginning to turn brown, about 5 to 8 minutes.

Stir in the chopped celery, bell pepper, carrots, seasonings (if adding) and sea salt. Cover the Dutch oven and cook, stirring occasionally, until vegetables have softened, about 5 to 8 minutes. 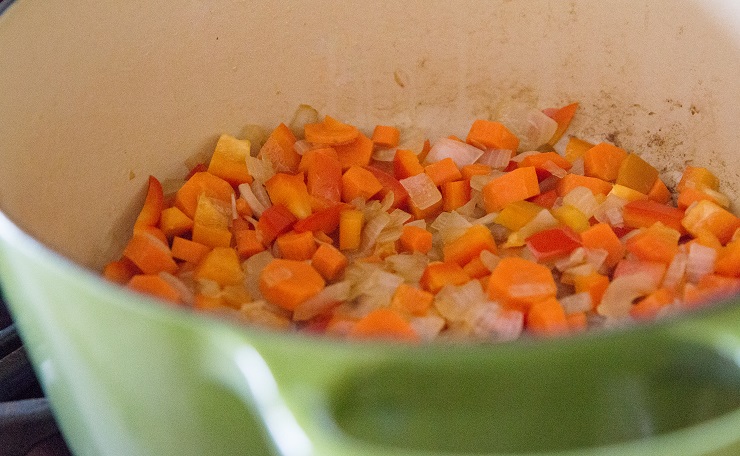 By this time, the corn and potatoes should be finished cooking and cooling. Use a knife to remove the corn kernels from all of the ears of corn.

Place half of the kernels in a blender, along with one cooked potato (save the other one to add to the chowder in chunks).

Add the coconut milk and water (or broth) to the blender, and blend until completely smooth. If you have an immersion blender, feel free to use it! This may take two or three rounds of blending. 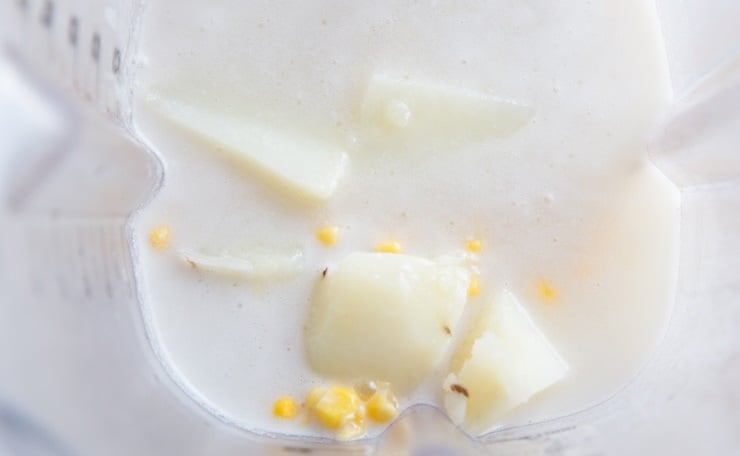 Transfer the chowder mixture to the stock pot along with the other chopped potato and bring to a full boil. Cook, stirring occasionally, until all vegetables have reached desired doneness, about 20 minutes. Taste for flavor and add celery salt or sea salt to taste. 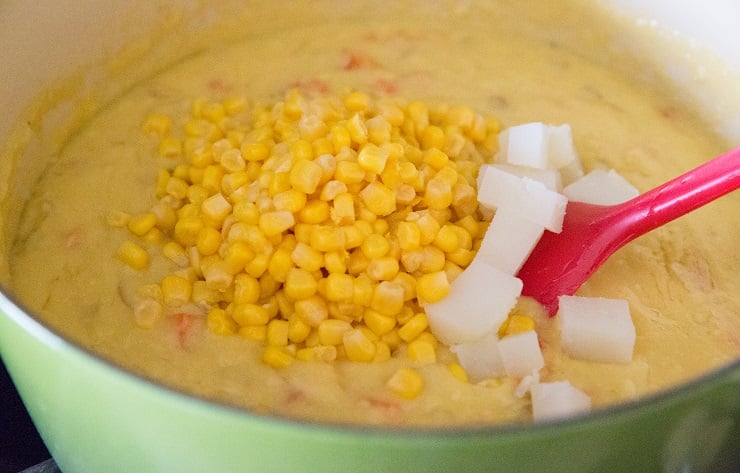 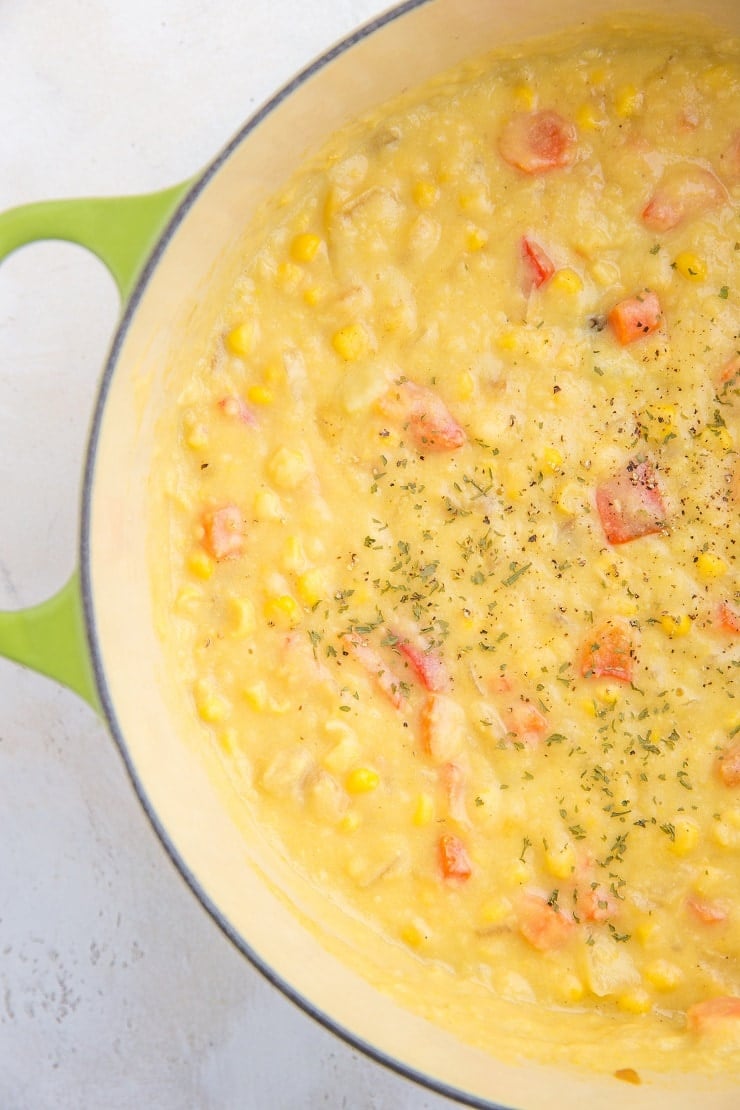 Serve in big bowls with tempeh bacon (optional) on top, and enjoy!

Store any leftovers in an airtight container in the refrigerator for up to 7 days.

While this recipe contains no heavy cream or butter, it tastes completely rich and decadent. Like a treat soup. Chowder with benefits. Dessert chow chow. I’ll stop.

To summarize: make this corn chowder while fresh corn is still in season to keep your belly warm and satisfied on the chilly evenings.

Yes, absolutely. I make this recipe year-round. In the summer months, I use fresh corn, and when corn is not in season, I use 3 cans of corn. I don’t drain the cans of corn, I simply add everything and this results in an amazingly sweet creamy vegan corn chowder! 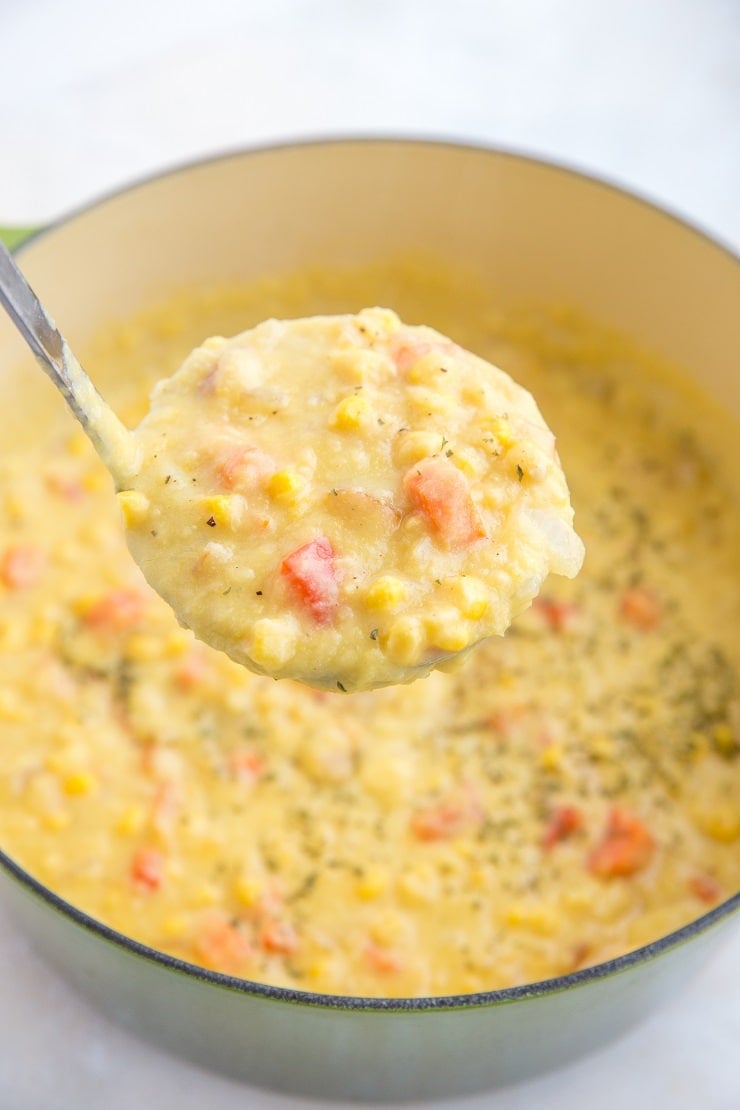 If you make this recipe, please feel free to share a photo on Instagram and tag @The.Roasted.Root!

*If you don't have access to fresh corn, use 2 cans of corn, drained 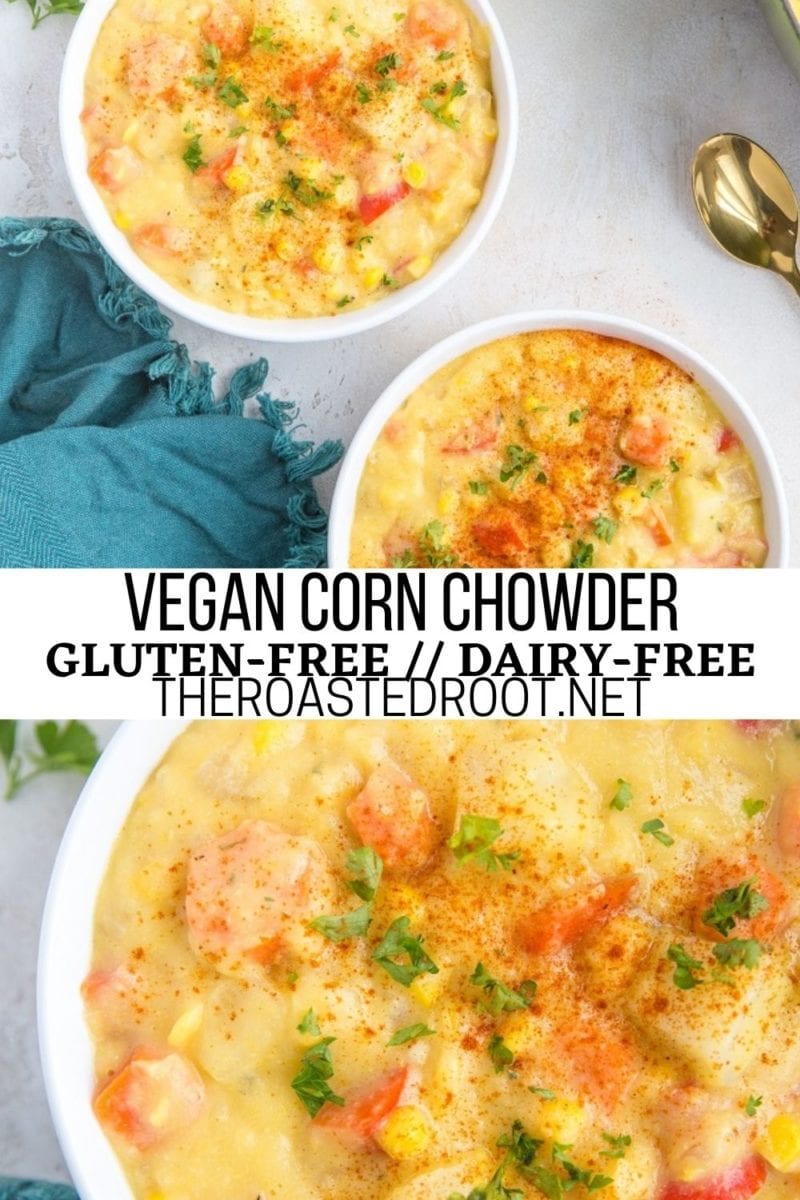 Lovely soup for the vernal equinox! I swapped the potatoes for a big Hopi squash and halved the amount of corn. I also subbed celery for the peppers but other than that I followed the recipe to a T! It turned out great, lots of happy harvest celebratees. Happy fall :)

Those changes sound amazing! So thrilled you enjoy the chowder...I'll have to try it using your method next time! Sounds incredible! xoxo

I made this recipe a while back and it remains one of my carnivore boyfriend's favorite vegan meals. I love this chowder!

So thrilled to hear it, Marci!

This was so freaking good. I used a bag of frozen corn that I let defrost a bit. And I like a chunkier soup and did not want to dirty my blender so I just used a potato masher at the end to mash some of it. Worked perfectly. I’m making it again very soon. To those saying they’re gonna use chicken broth, come on?! Can’t you leave the poor chickens alone for this one? #FriendsNotFood 🙂

Thanks for the sweet note, Angela! I'm happy you enjoy the chowder. I appreciate you sharing the changes you made in preparing the recipe, as that helps people who don't have a blender :) Very helpful! xoxoxo

This soup was amazing! So creamy and my family had no idea it was vegan! So creamy and tasty. I went the canned corn method so I used slightly less broth and it was perfect.

So thrilled to hear it, Jac!! Thanks so much for the sweet note! xoxo

I saw the calorie count above but I am wondering how much is in a serving size?