I originally posted this recipe on April 16, 2015 and it has been made thousands of times since! I still make it when I’m craving something comforting and banana bread-like but don’t want to bake a full loaf of banana bread. 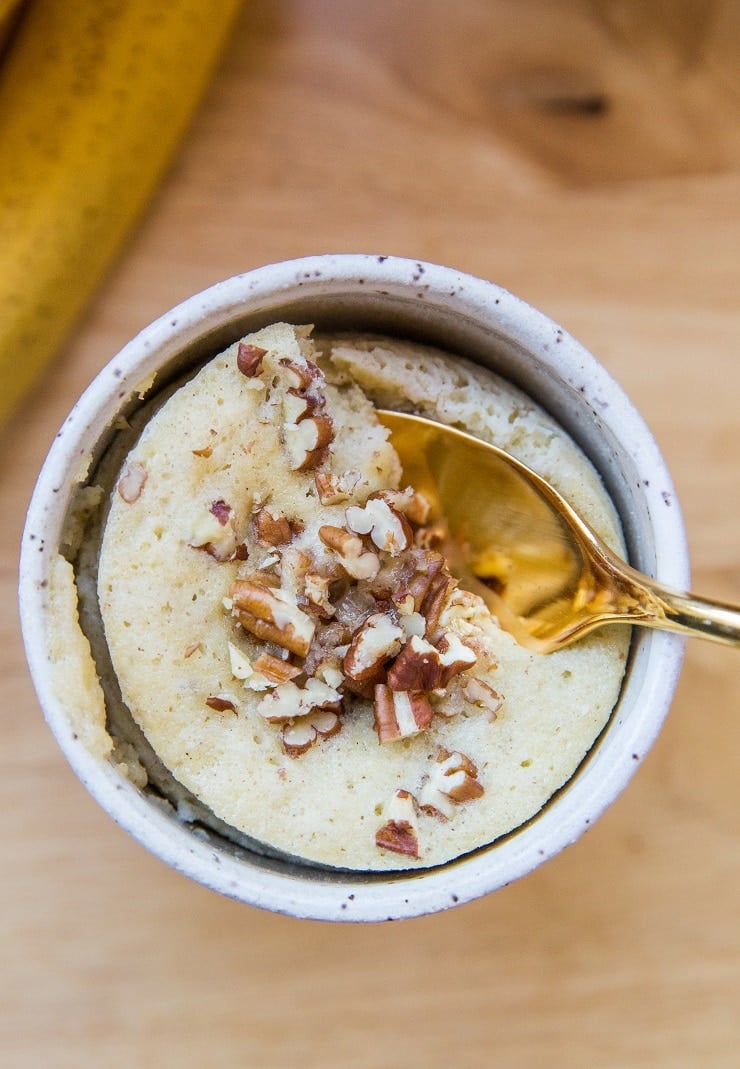 Cake for one?! With zero guilt or regrets? What more could we need in life??

I mean, the thing literally takes 5 minutes to make! And there’s no cleanup involved. No leftovers to tempt you at 2am.

Plus, this Paleo Banana Bread Mug Cake is legitimately healthy!

Grain-free, refined sugar-free, dairy-free, and you’d never even know it! This banana mug cake is ultra fluffy, moist and sweet!

So what it boils down to, is you’ve got yourself a crazy convenient breakfast or dessert that is 200% nutritious and simply sensational.

I have included two versions in this post – an almond flour version and a coconut flour version. It seems as though most people have a preference of one over the other, so I figured I would share both methods. 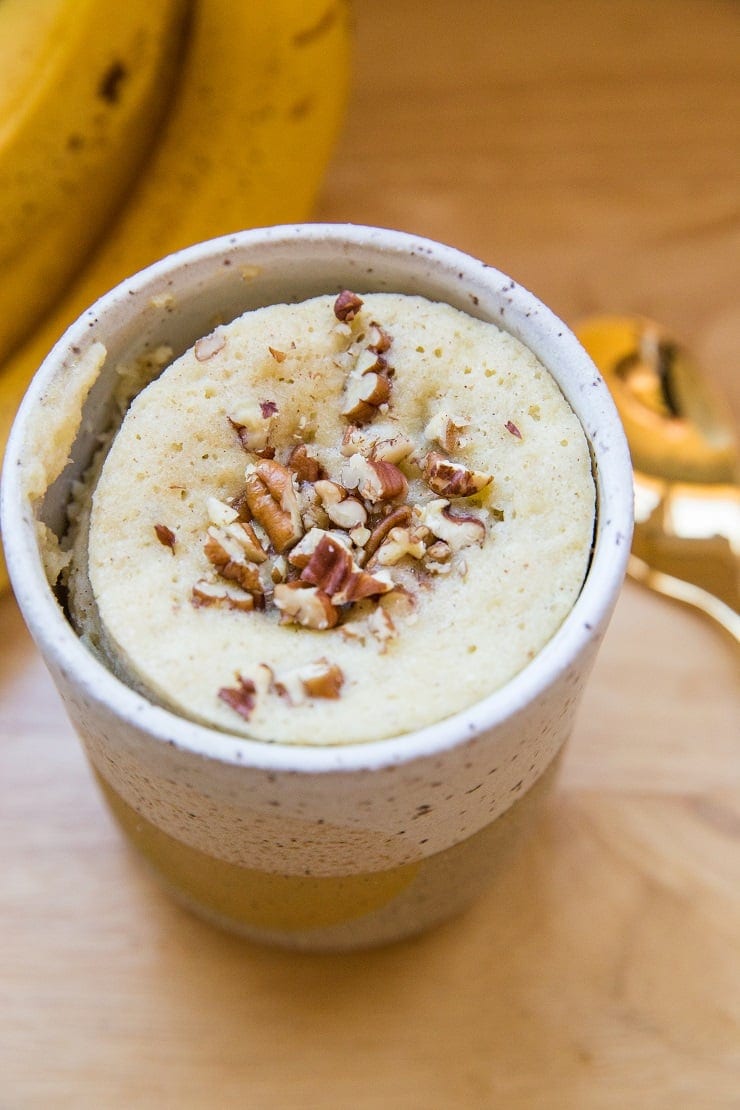 THIS JUST IN: Mug cake is the lowest maintenance thing you will ever do in your entire life. Other than eating an apple. Or sleeping. Or…just trust me on this one.

What if I told you I ate this for breakfast and dessert every day for two solid weeks? I had to exercise my will power and remind myself that diets rich in mug cake, while delicious, are not well-balanced.

Take it from me, once you go mug cake, you never go back.

How to Make Banana Mug Cake:

Because haven’t you heard? This thing’s a cinch.

Choose a microwave-safe mug that is fairly large, as the batter will rise substantially.

Start by mashing the banana in the mug until it’s nice and creamy. Add the rest of the ingredients (egg, almond flour or coconut flour, cinnamon, pure maple syrup or honey, sea salt and baking powder) and stir everything together until the batter is thick and well combined. 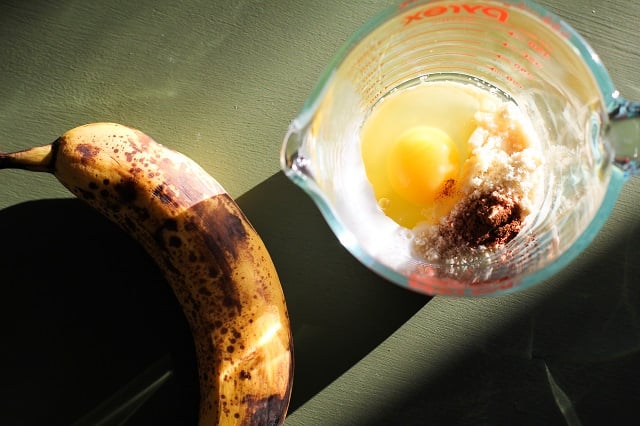 Or you can be rebellious and stir everything together in no particular order. 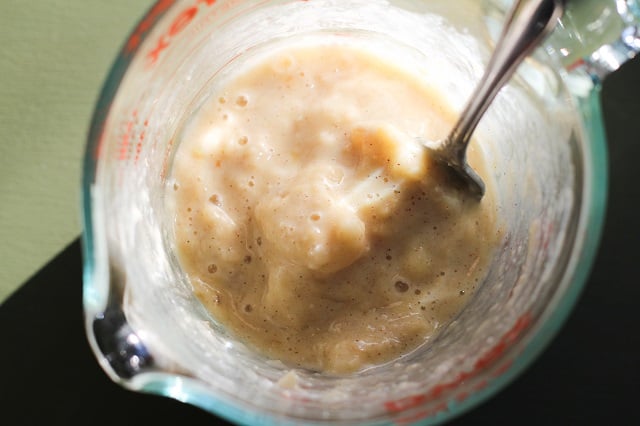 Microwave on high for 2 to 3 minutes until the cake is set up in the center.

I often perform this step in a measuring cup and then I transfer the batter to a mug because it turns out looking cleaner for photos. If you aren’t concerned about the way it looks, simply stir it all up in a mug!

Because I took it upon myself to test this recipe 17,000 times with my face, I can give you a little insight as to how to make it two delicious ways with either coconut flour or almond flour.

The recipe is pretty much the same, you just use slightly different quantities of flour.

Banana bread mug cake made with coconut flour turns out light and fluffy, with a texture very similar to regular cake.

Plus: delicious. And: full of fiber. Ladies? You want.

Simply stir everything vigorously in a mug and microwave on high for 3 to 3.5 minutes, or until the cake has risen quite a bit, is fluffy, and cooked through.

Almond flour mug cake comes out light and spongy, and almost custard-y. The texture isn’t an exact replica of regular cake, but it’s still super delish, full of protein, and is rich in banana flavor.

In order to make the mug cake with almond flour, you’ll follow the recipe in the recipe card below and use 1/4 cup of almond flour. I’ve found the almond flour version doesn’t need the coconut milk or almond milk, so omit it unless the batter seems too thick or dry.

Simply mix it all up thoroughly in a mug, microwave for 2 to 3 minutes (this will depend entirely on your microwave), until the cake has risen substantially and has set up in the center.

I will report, the almond flour version is my personal favorite. Let me know which one you like best!

How to Make Mug Cake in the Oven:

I know, I know, I’m not a fan of microwaving things either…you can also bake the mug cake in the oven at 350 degrees F for about 30 minutes (or until the cake tests clean).

My take on that is you may as well bake a full cake if you’re going to go through the trouble of pre-heating and such. We trade microwaves for convenience in this life of compromise. 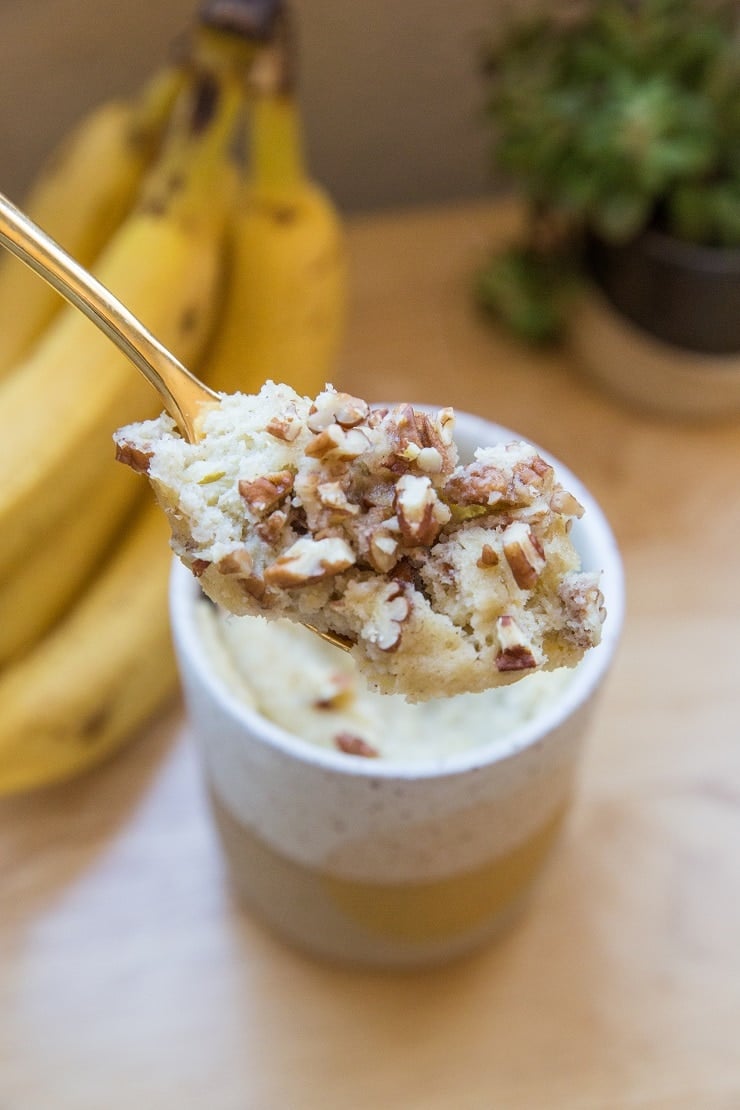 Of course, if you have a hankering for a full loaf of banana bread, you can always make my Paleo Banana Bread using almond flour, or my Coconut Flour Banana Bread.

If you make this recipe, feel free to snap a photo of it and share it on Instagram, tagging @The.Roasted.Root!

Paleo Banana Bread Mug Cake for all them meals!

Nutrition facts are calculated for the coconut flour version.

*If making the almond flour version, omit the coconut milk unless it appears as though the batter looks dry.

**You can omit the sweetener altogether or add more depending on your personal taste. 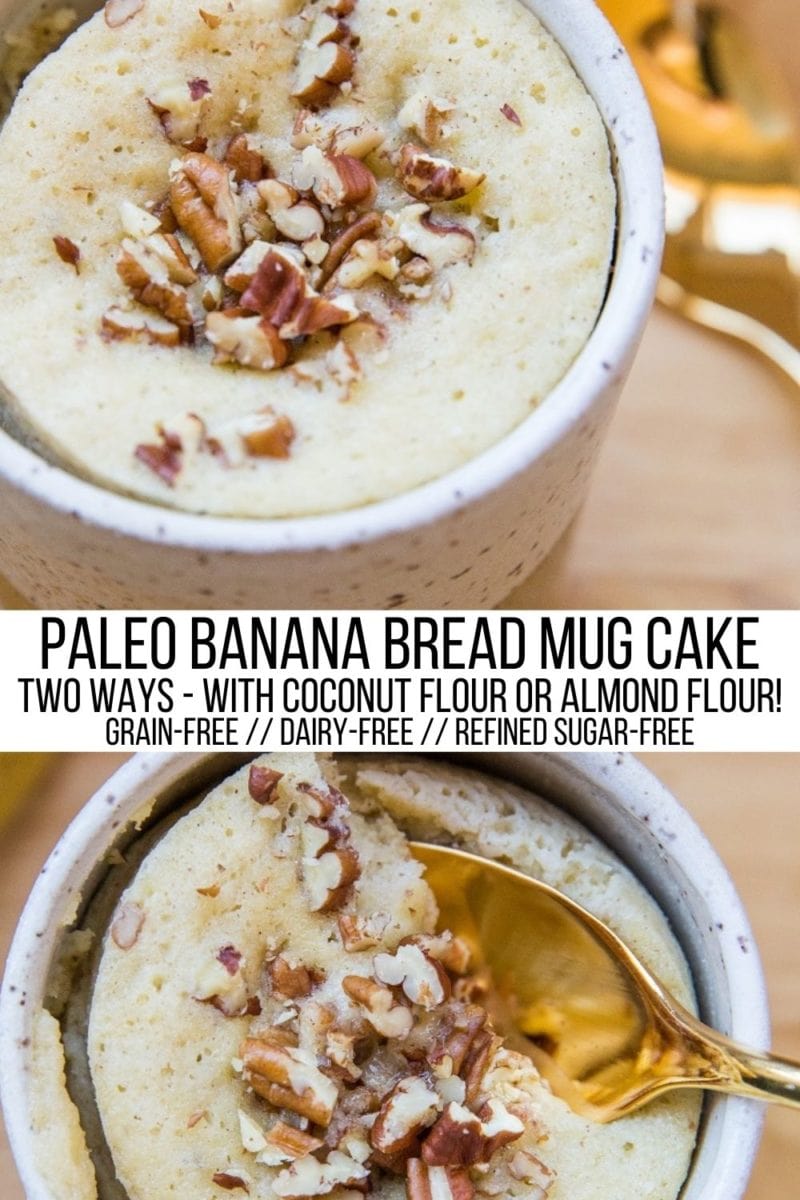 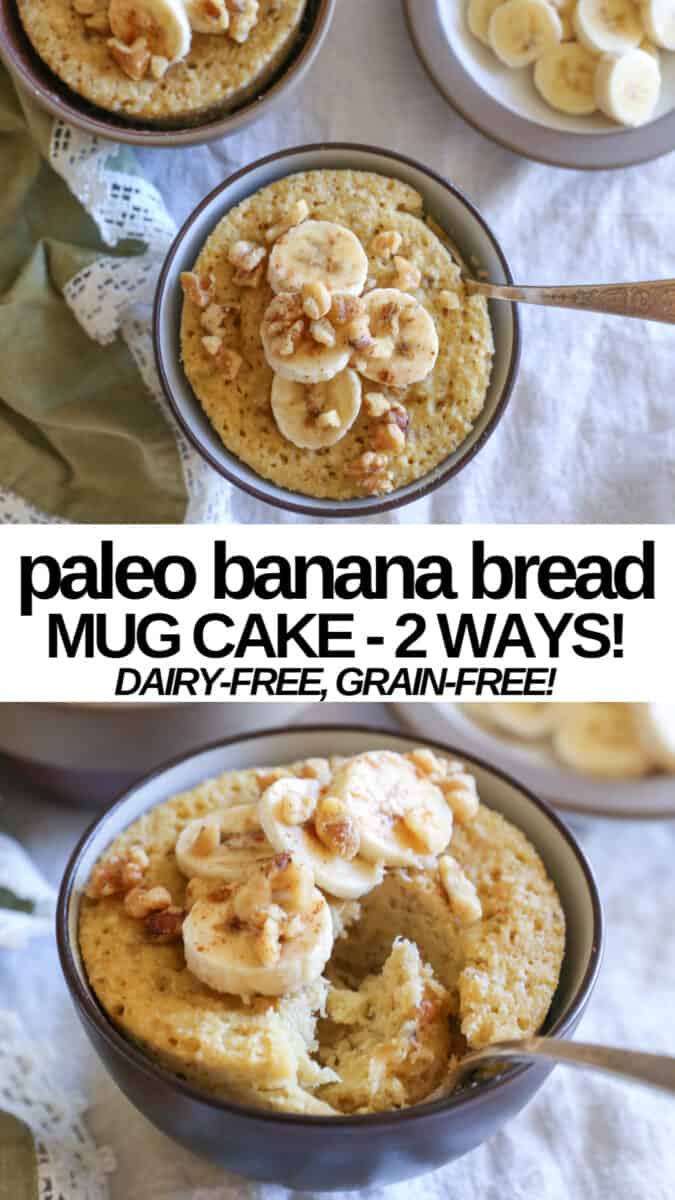 Hello could this recipe work in the oven too?

Honestly I think you should Call it banana bread batter because this ends up nothing cakey or bread like. It’s mush. I’m not saying it’s bad but it’s definitely not what I expected. :/ got my family saying “eww what is that”

Hi Mikala. More information would be super helpful. For instance, which flour did you use (coconut flour or almond flour)? Which brand of flour did you use? Did you add more pure maple syrup? Did the batter seem thin before you microwaved it? Did you make any changes to the recipe? Let me know so I can troubleshoot what happened.

Moist and delicious. I used the coconut flour version and cooked it in the little convection/toaster oven. I added a Tablespoon of cacao powder. So good! Thank you!

I LOVE this! Thanks so much for posting. Nice to have something different to add to the recipe repertoire.

I can’t wait to try this. Thank you so much.Thanks