How to Roast Spaghetti Squash

Home » How to Roast Spaghetti Squash

Would you believe me if I told you one of the meals I crave the most is a steamy bowl of spaghetti squash with a meaty red sauce, fresh basil, and parmesan cheese? I know, it may sound odd, but this is my idea of a perfectly comforting meal.

During the fall and winter months, I find myself craving pasta in all forms, and love the idea of re-creating my favorite hearty pasta dishes using spaghetti squash in place of noodles. It’s a lower-carb, healthier option, plus I wake up the next morning feeling energized rather than weighted down.

While I was developing recipes for my cookbook, The Quintessential Kale Cookbook

, I wanted to include gluten-free, paleo-friendly pasta dishes, so I settled on preparing spaghetti squash with a spicy roasted garlic, kale, and mushroom sauce and was very pleased with the result.

So much so that I made the meal 4 times in a row without tiring of it! 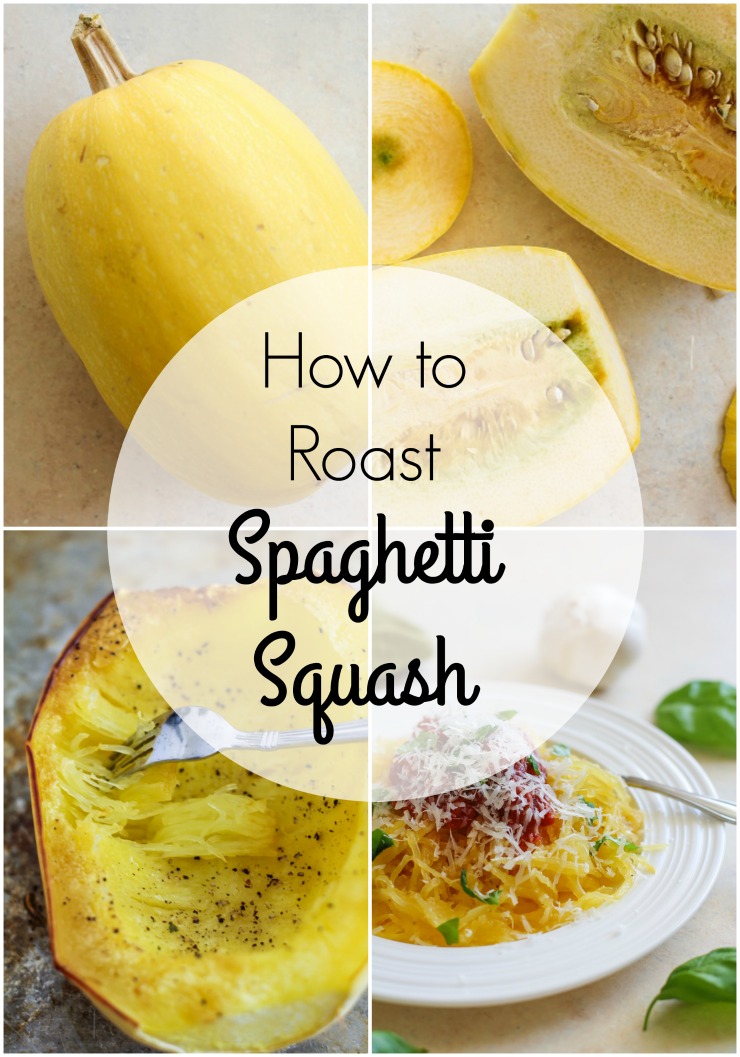 My first attempt at spaghetti squash was one of utter confusion, but after understanding the mechanics of the marvelous squash, it’s now one of the easiest things to make!

The first time I roasted a spaghetti squash a few years back, I was unsure of how to actually get into the squash. Once I figured it out, I was a little appalled at how much juice was in my “spaghetti.”

Of course, once I ate it, I was like, “ this is DELICIOUS!…but it doesn’t really taste like spaghetti.” Because it doesn’t.

In fact, it’s not even really close to an authentic noodle, but it still makes for a lovely meal.

I figured if I had trouble figuring out how to tap into the magical land of the spaghetti squash, there had to be others in the same boat. For that reason, I decided to make a little tutorial – hopefully you find it helpful!

Be sure to watch the video at the top of this post for the step-by-step visual.

So let’s hop to it! Stay tuned at the end of this post for ideas on how to serve your spaghetti squash noodles.

How to Roast Spaghetti Squash

Preheat the oven to 400 degrees F. Grab your spaghetti squash and chop off the tip and tail. Halve it length-wise. 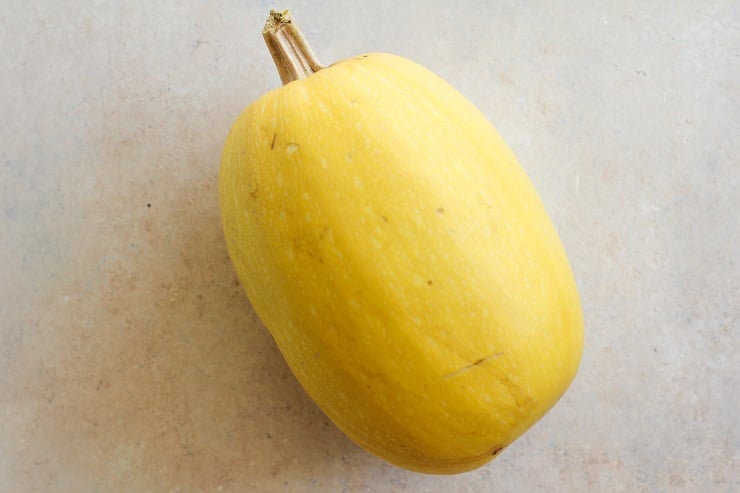 Stand the squash upright on a cutting board. Use a sharp knife, as dull knives likely won’t be able to get the job done. Allow gravity to help you cut from top to bottom, and be very careful while cutting – don’t force it! 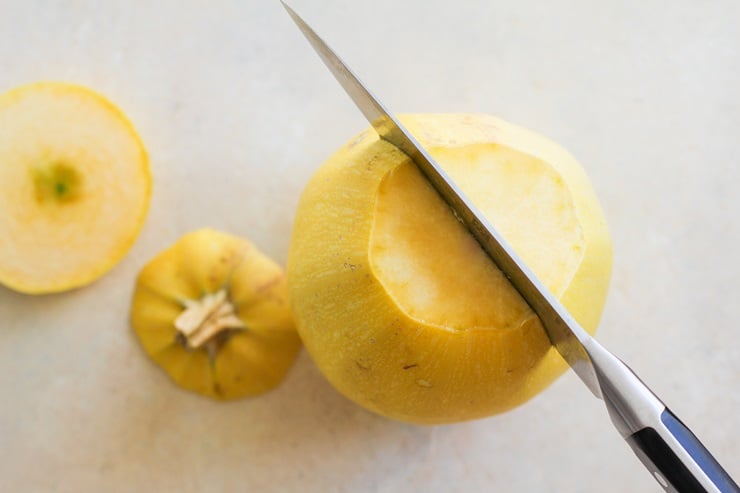 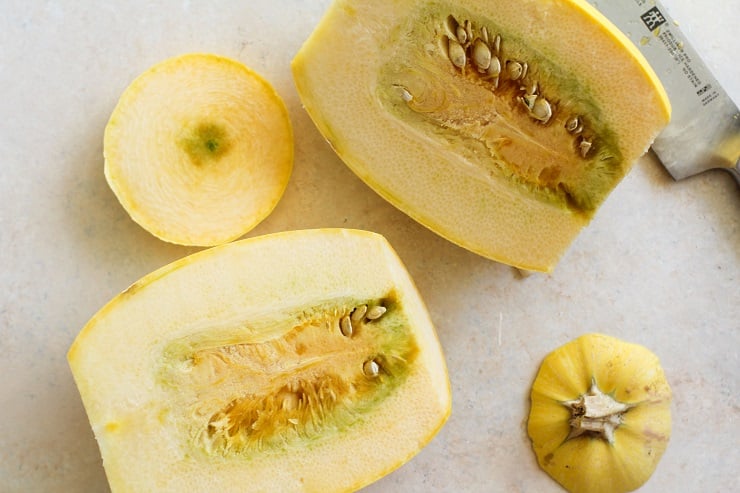 Scoop out the innards and seeds using a sturdy metal spoon. Get the spoon as close to the flesh as possible while you’re scooping so that the innards release easily. 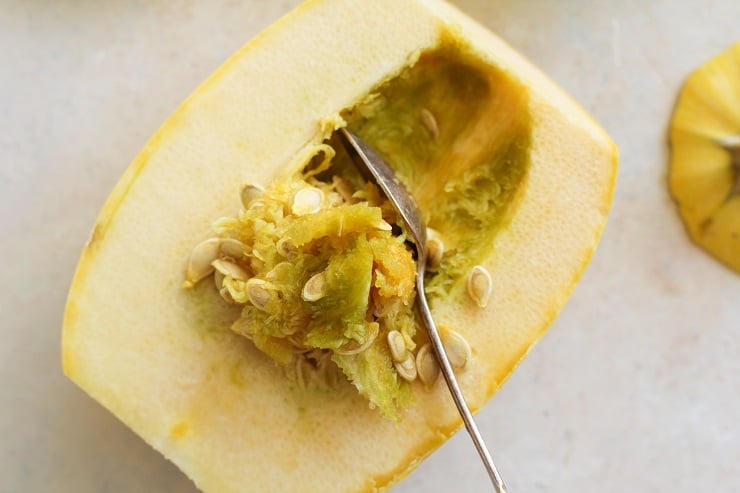 Coat the flesh with olive oil and use your hands to smooth the oil over the full surface of the flesh. Sprinkle salt and pepper over each half. 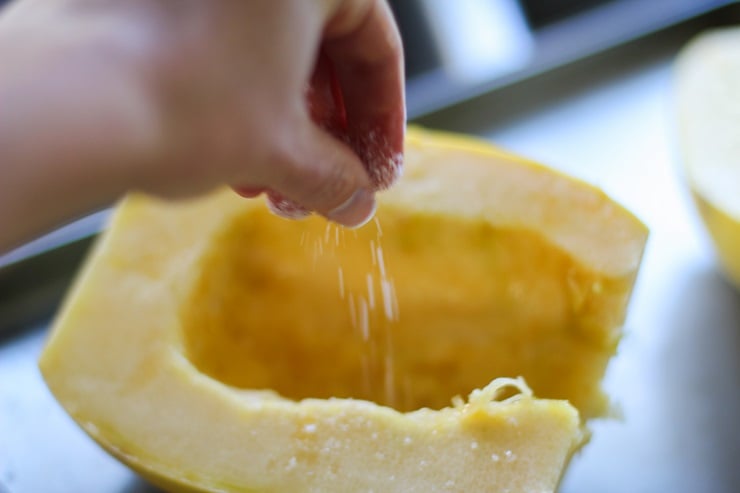 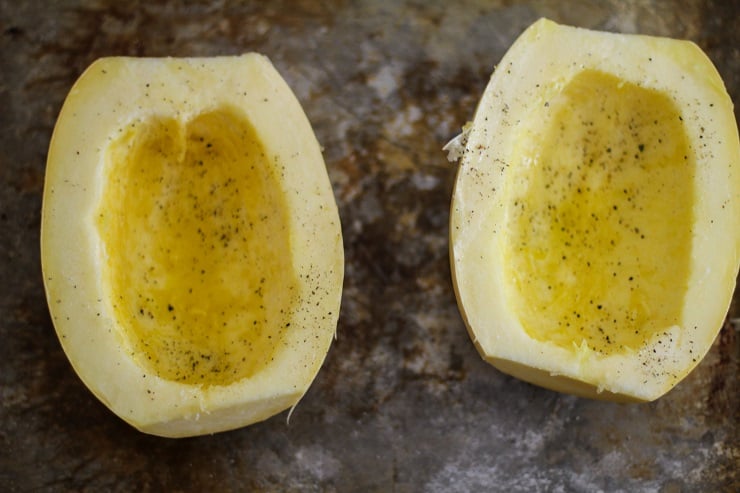 Place both halves cut-side down on a baking sheet. 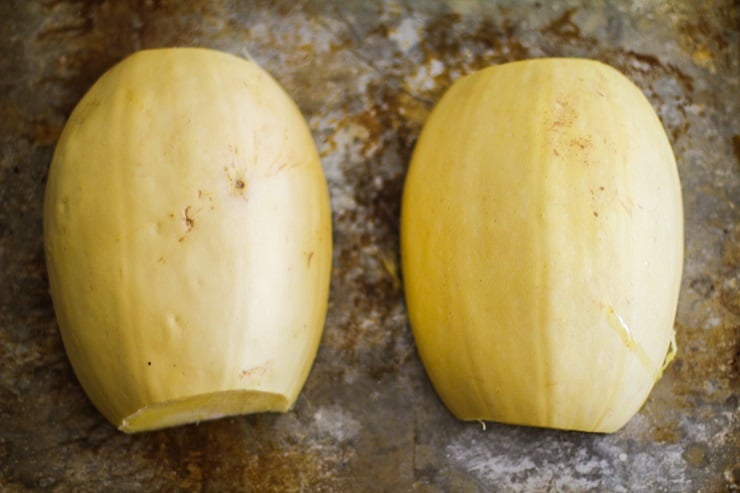 Roast for 40 to 50 minutes, or until the flesh is very tender when poked with a fork. Note: You can adjust the bake time according to your personal taste – roasting the squash for less time will result in al dente “noodles.” 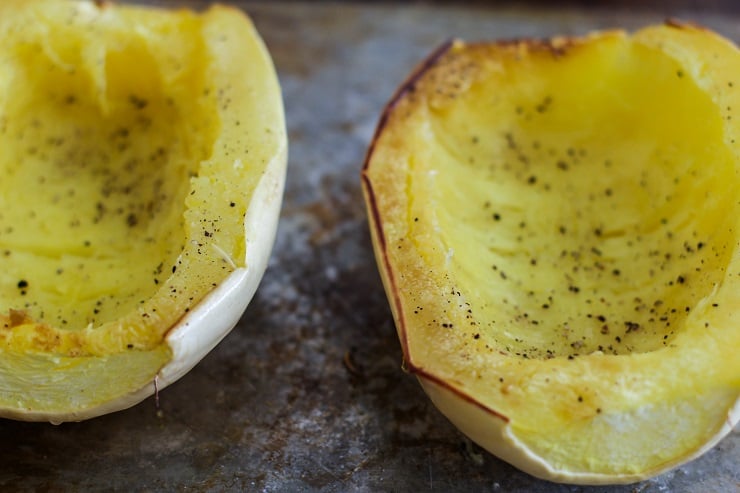 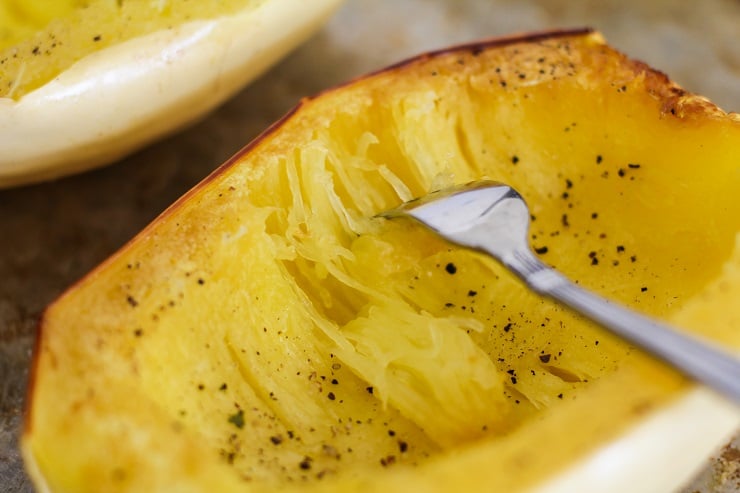 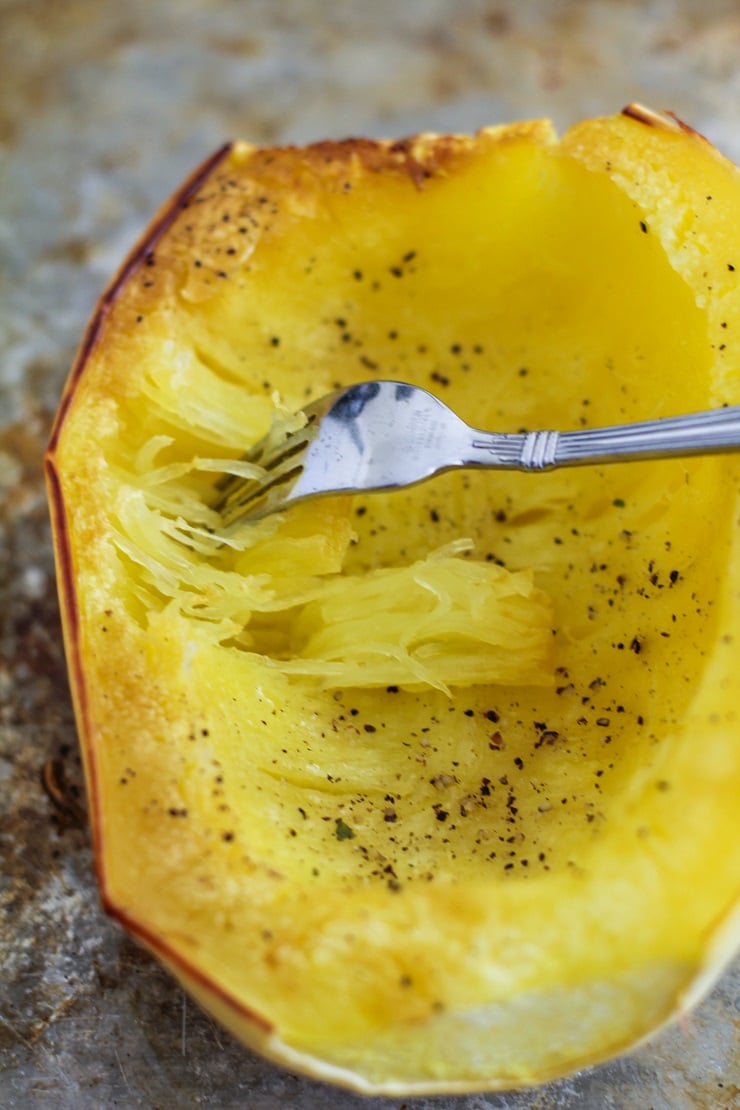 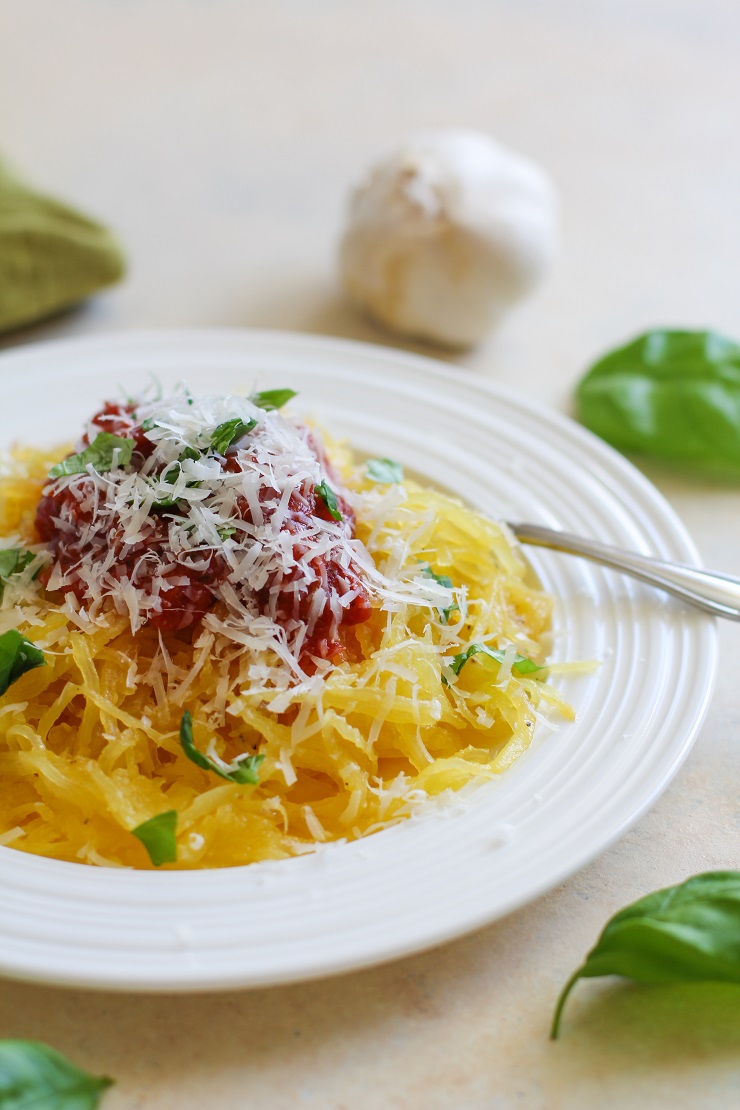 What to Do with Spaghetti Squash:

My cookbook, Paleo Power Bowls, is now available! CLICK HERE to check it out, and thank you for your support!

What’ll you put on yours? 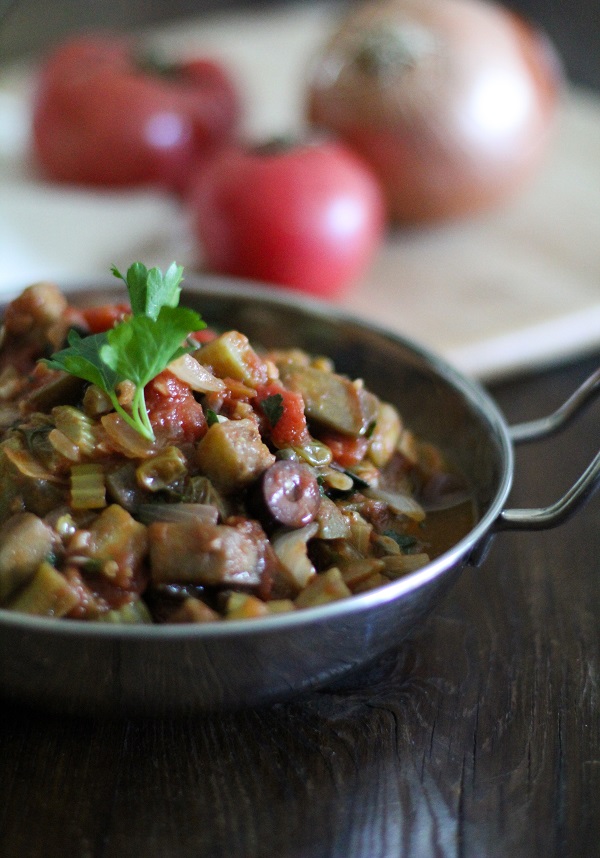 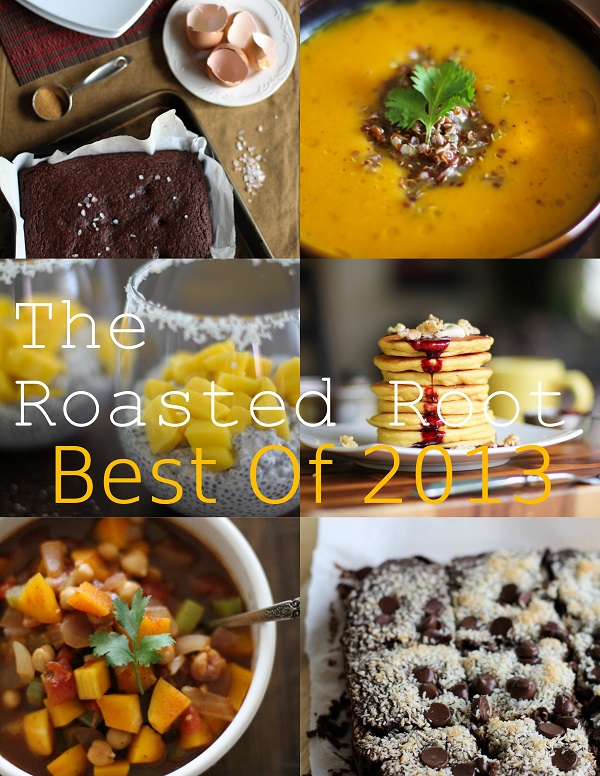 Next
Top Recipes from 2013
Click here to cancel reply.

I have made spaghetti squash a lot but never thought of cooking it this way…..15 minutes less cooking time in my oven and oh my…..it was the consistency of pasta…….I made homemade sauce and meatballs….it was very good….thank you for the tip!!!

I'm so happy you enjoyed it, Jason!! Thanks for the sweet note! :D xoxo

Hello there, That's a great article about how to roast spaghetti squash. keep your good job.

great walk through and tips, especially when spaghetti squash gets far less attention these days than zucchini, thank you

Thanks for all the ideas on ways to use it! I like to make it a dessert. I drizzle brown sugar and butter syrup over it.

Oooh I love that idea! Thank you for sharing! xo

thank you for the recipe. Came out perfect! Also, I saved the seeds, washed and dried them. Then I tossed them with a little olive oil and sea salt and baked on a cookie sheet in the lower shelf while the squash was baking. Baked about 6-7 minutes, then flipped them and 2 minutes again stirred and againone more time. Watch they don’t burn, and just lightly golden, yummy!

What a fantastic use of resources! I love the idea of roasting spaghetti squash seeds...I'll do this next time I roast one ;) xoxo