Dreamy decadent fudgy keto brownies made with almond flour and zero-calorie sweetener for a low-carb sultry dessert. This easy recipe comes with a vegan option and is perfect for those who watch their sugar intake or follow a keto diet.

This post is sponsored by Monk Fruit In The Raw® 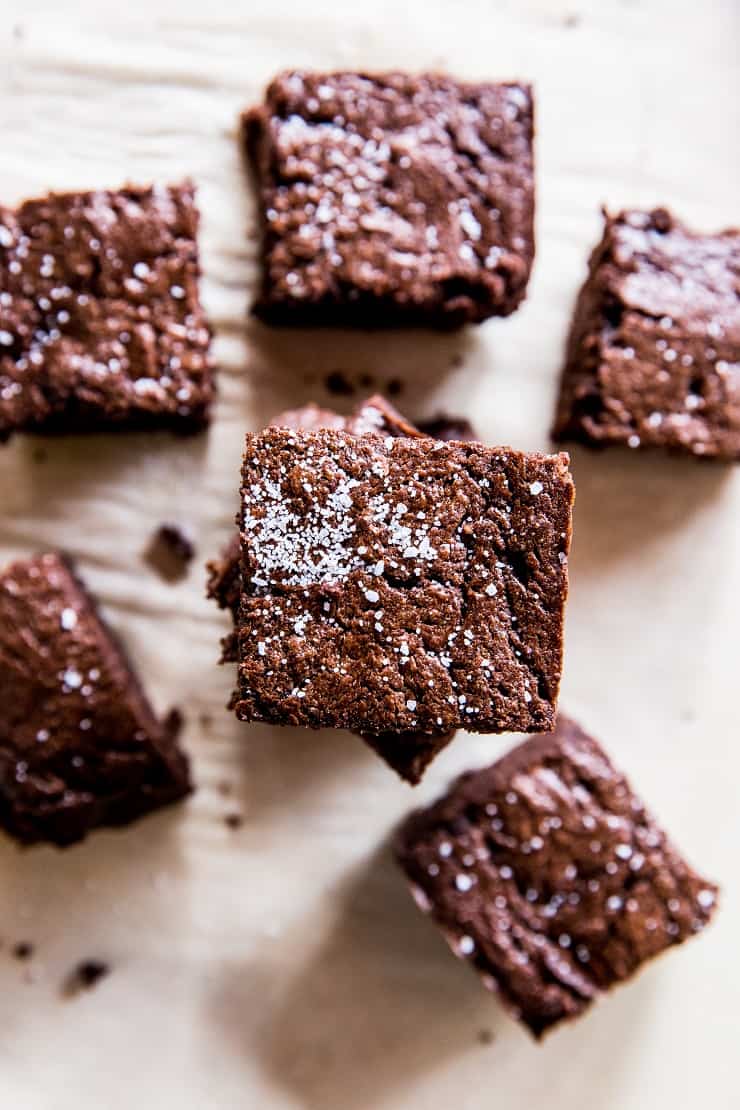 Oh hey, chocolate lovers, do I have a treat for you?!

If you’re a seasoned veteran of The Roasted Root, you know I have a mega weakness for brownies, but am also careful with my sugar intake.

For this reason, I have been known to develop sugar-free (keto-friendly) recipes that are designed to not raise blood sugar. Just take a looksy at my Low-Carb Peanut Butter Fudge, Keto Edible Cookie Dough, or Keto Coffee Ice Cream for example. 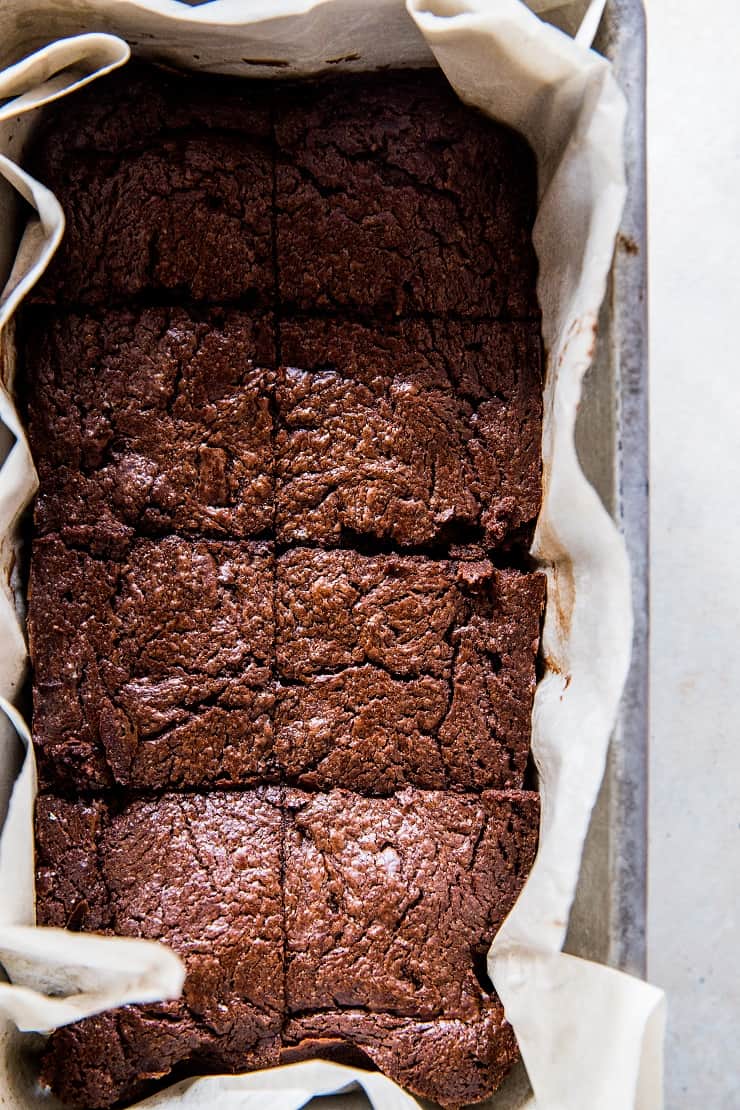 WELL, I finally made it my mission to make a low-carb brownie recipe that is melt-in-your-mouth delicious and also friendly to my blood sugar.

I have included all sorts of adaptations to fit your dietary restrictions – have a look in my Recipe Adaptations section below for a vegan option and more!

Using 9 basic ingredients, we’re whipping out the fudgiest and best keto brownies in all the land. When it comes to sugar-free treats, the biggest question is always what type of sweetener to use.

I use Monk Fruit In The Raw®. Let’s chat about it!

Have you tried monk fruit sweetener? For those of you who are new to it, here’s the skinny:

What is Monk Fruit Sweetener?:

Monk Fruit In The Raw is a  is a zero-calorie sweetener, perfect for replacing cane sugar in any of your sweet treats. Monk fruit is native to China and has been used in Chinese medicine for many decades. The sweetener is derived from monk fruit extract, making it a plant-based sugar replacement.

Using the Monk Fruit In The Raw Bakers Bag is super easy because it’s a 1:1 conversion. If you’re trying to replace 1 cup of cane sugar, simply use 1 cup of monk fruit sweetener.  For best results, it’s recommended to replace half the sugar in your recipe.  This allows for proper browning and rising that only sugar can provide.

How to Make Keto Brownies:

Take three eggs out of the refrigerator to bring to room temperature.

Melt the ghee/butter and chocolate in a saucepan on the stove top over medium-low heat. Stir and heat just until mixture has melted, but don’t bring to a full boil. Set aside while you’re prepping the rest of the recipe.  Once the mixture has cooled, stir in the pure vanilla extract.

Note: As an alternative, you can heat the ghee and chocolate in a microwave-safe bowl and microwave for 30 seconds. Stir well until melted and creamy.

Crack the eggs into a stand mixer (or mixing bowl if you’re using a hand mixer) and beat well until frothy.

Add the melted chocolate mixture and beat until well-combined and a pudding-like consistency is reached. 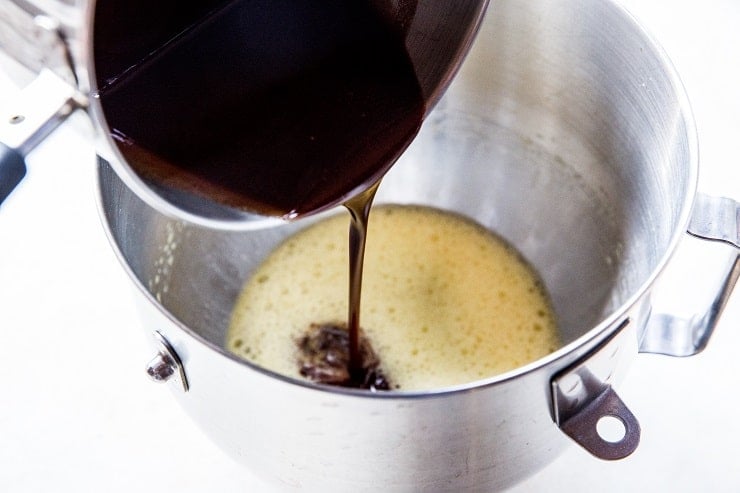 Leaving the mixer on low speed, slowly add the flour mixture until incorporated. Beat at a higher speed until well combined and a fudgy brownie batter is formed. 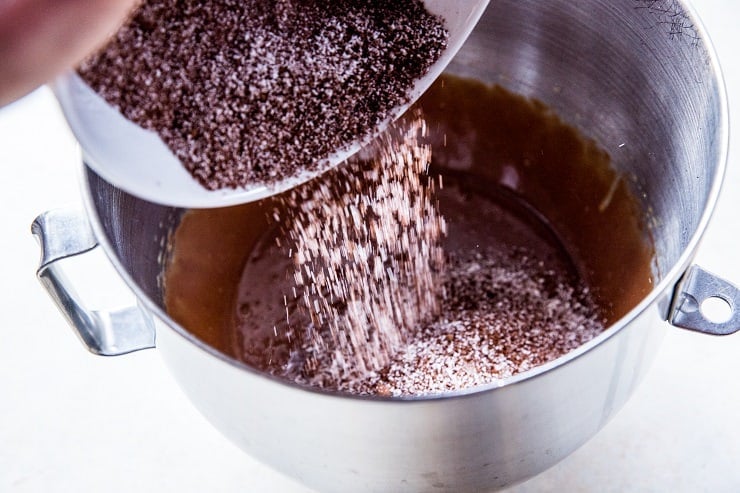 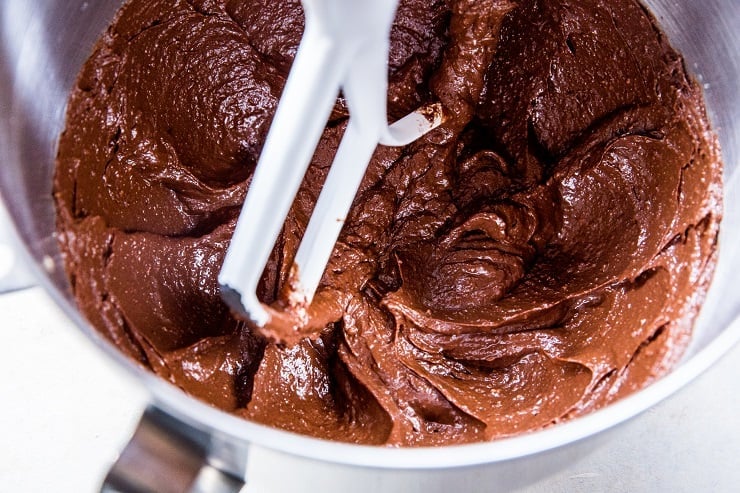 Transfer the brownie batter to a parchment-lined 9” x 5” loaf pan and smooth into an even layer. 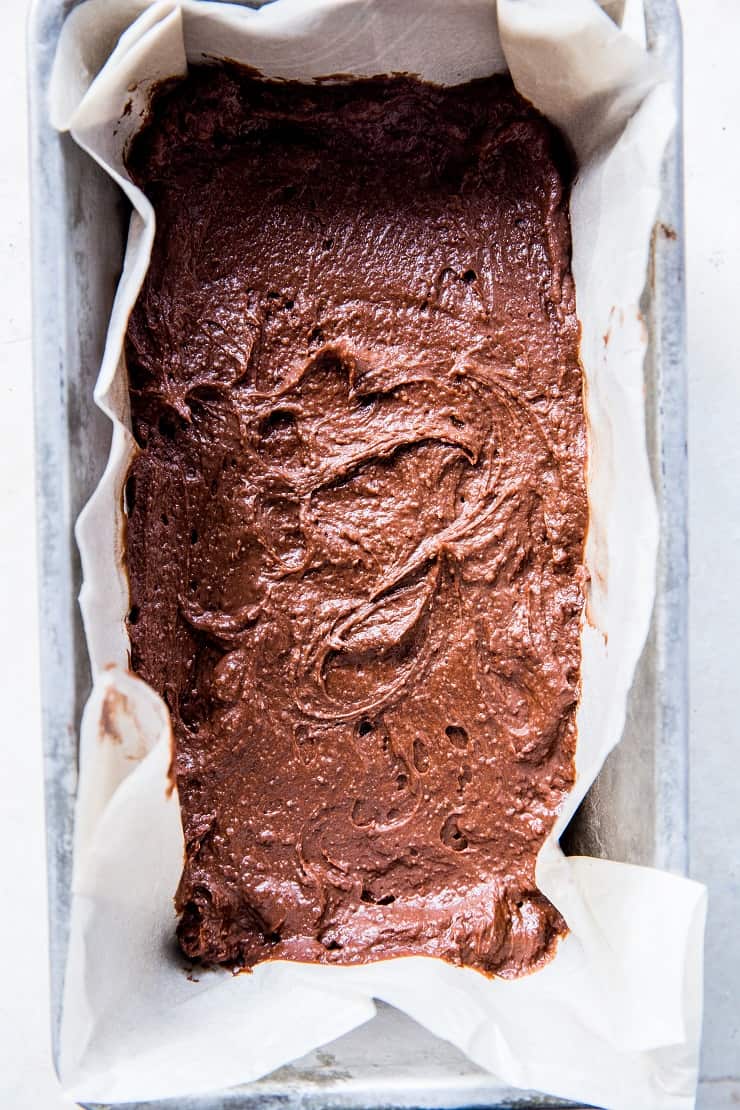 Bake at 350 degrees F for 18 to 22 minutes. The less time you bake the brownies, the fudgier they will be. Promptly remove the keto brownies the oven and allow brownies to cool at least 30 minutes before slicing and serving. 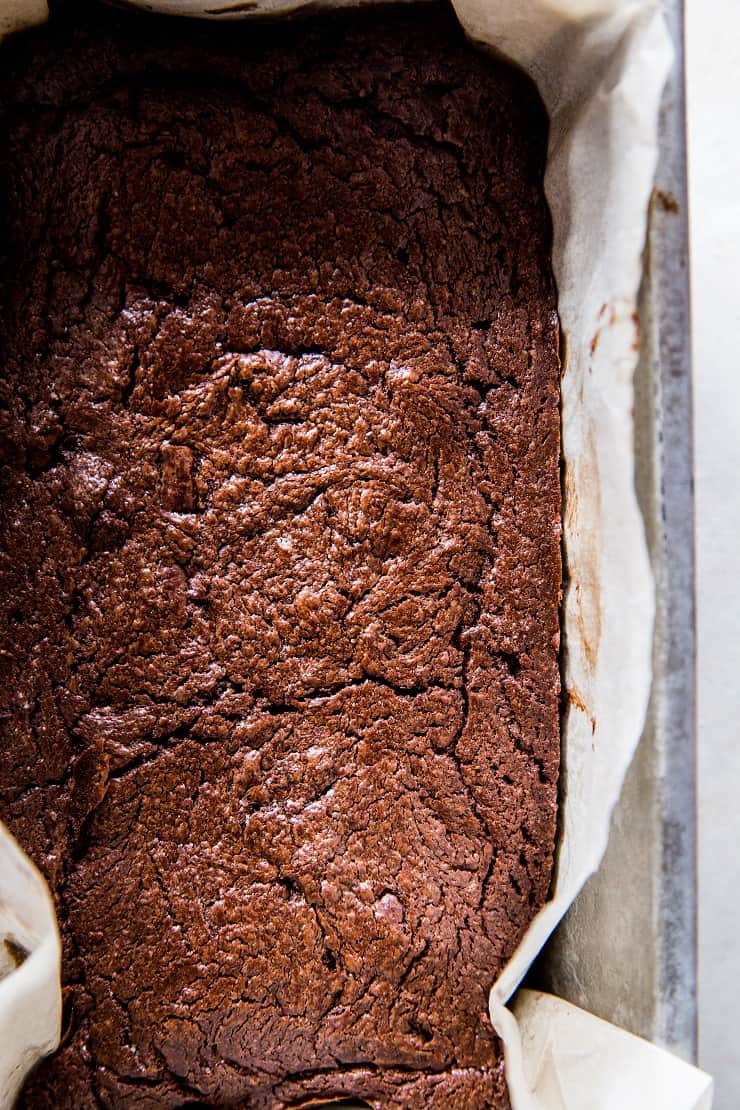 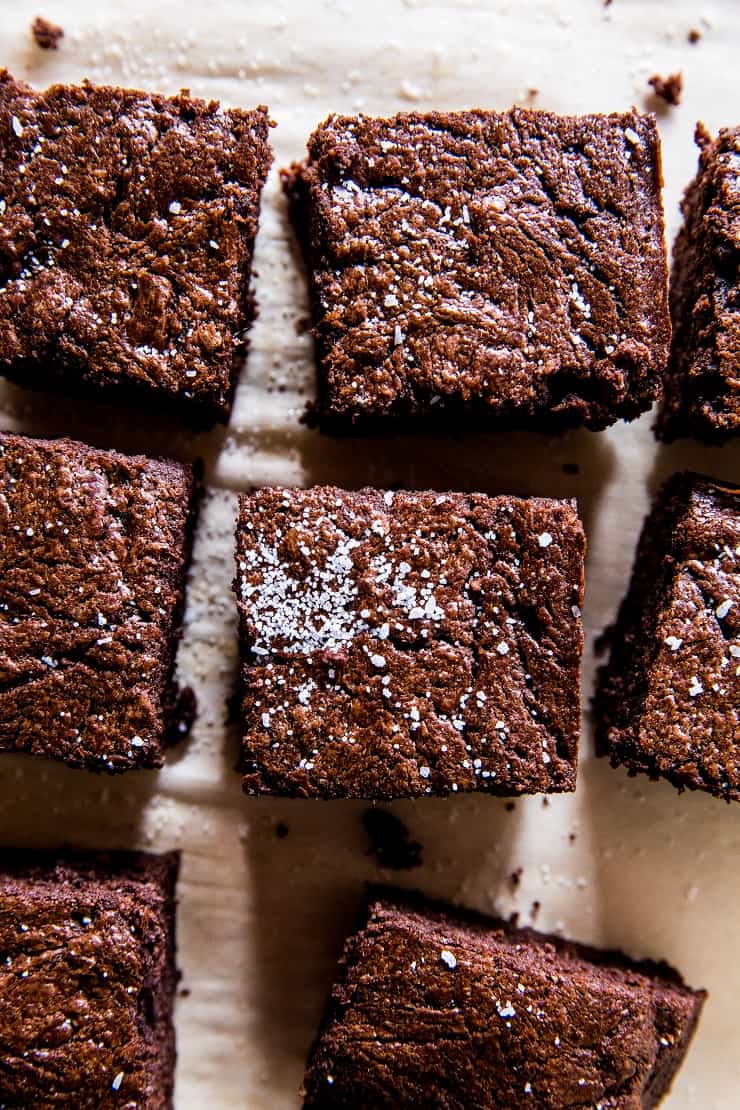 Make the recipe vegan by substituting coconut oil for the ghee, omitting the eggs, and add 3 flax “eggs.” To do so, whisk 3 tablespoons ground flax seed in a bowl with 9 tablespoons water. Allow this mixture to sit 10 to 15 minutes, stirring occasionally, until it thickens to the consistency of beaten eggs.

While the flax egg mixture is sitting, melt the coconut oil and chocolate bar together in a saucepan. Stir the remaining dry ingredients together in a mixing bowl.

Whisk the flax “egg” mixture into the saucepan with the melted coconut oil and chocolate. 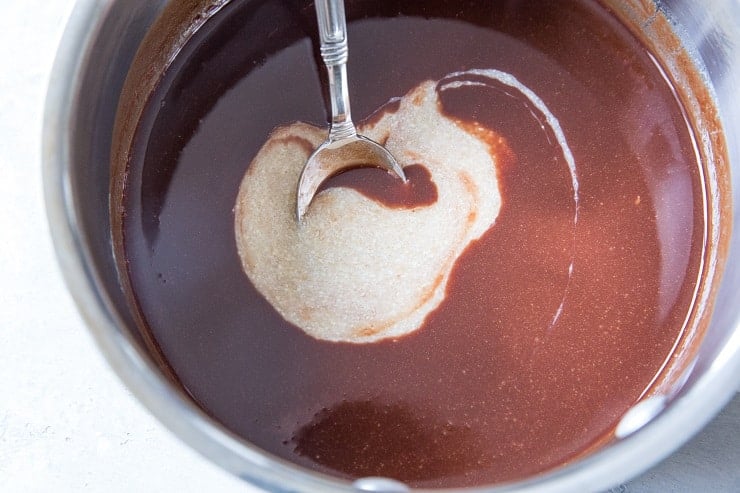 Pour this mixture into the mixing bowl with the dry ingredients and stir well to combine. 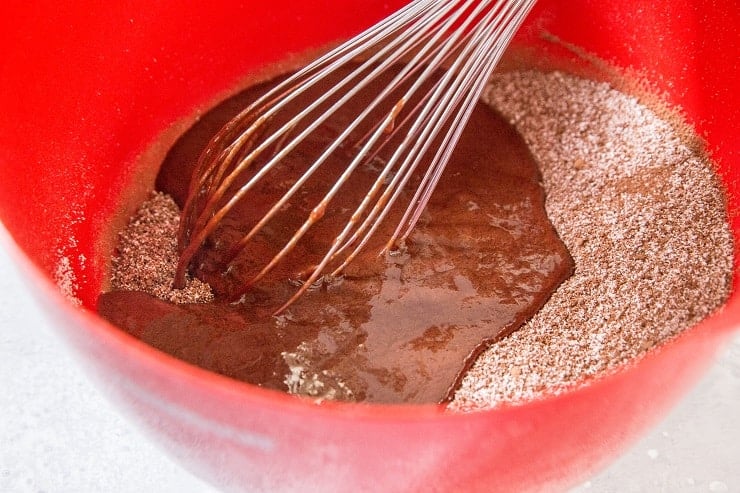 Transfer to the parchment-lined loaf pan, bake, and enjoy! 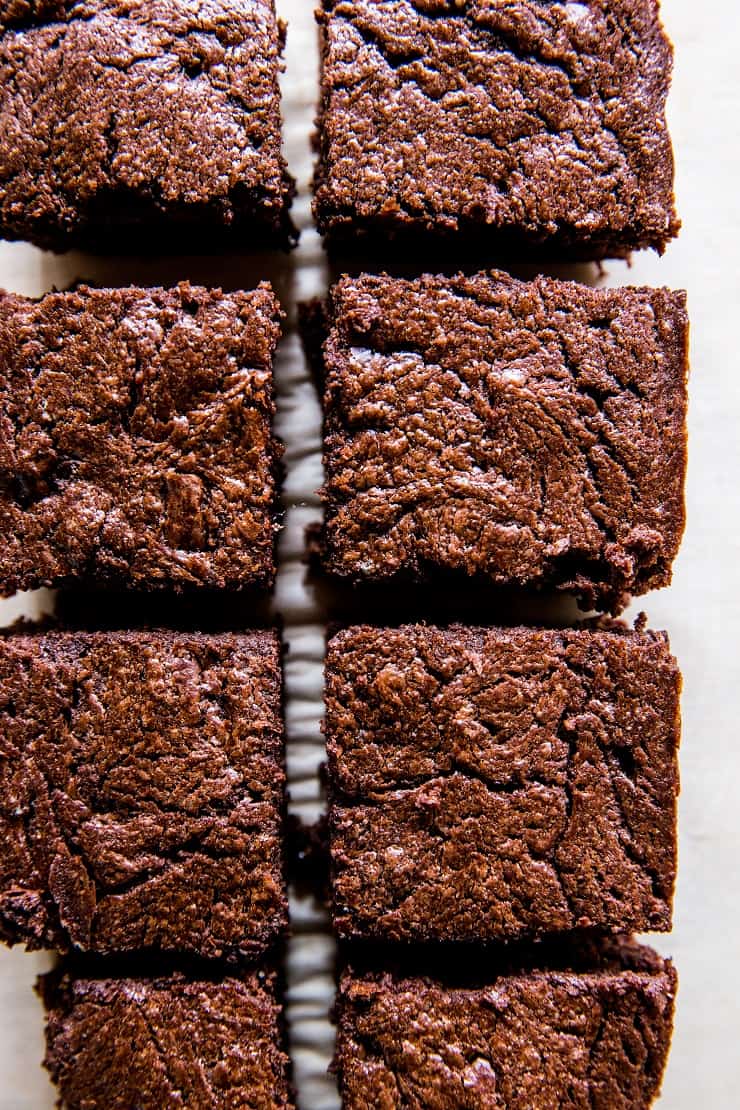 *You can use grass-fed butter or coconut oil instead of ghee.

***You can replace the almond flour with 3 tablespoons coconut flour 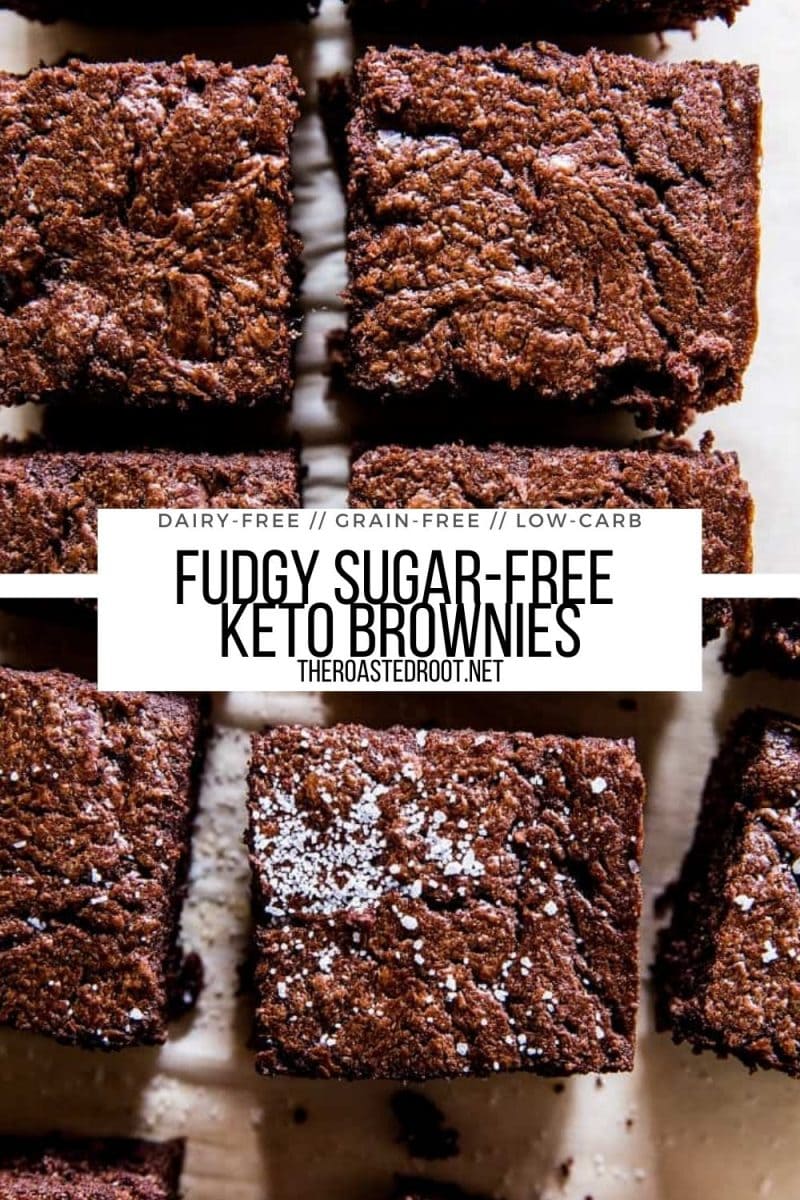 Hi Marea! Both will work, but I use granulated monk fruit sweetener :) Enjoy!

I made the brownies Feb 15th, and the texture was better than other keto recipes, but the Monk Fruit Sweetener that is mixed with other sweeteners was not sweet at all! I had pure monk fruit sweetener before, and it was very sweet. Could be my baking chocolate was too bitter. Anyway, I may try swerve next time, and less baking chocolate. Meanwhile, perhaps if I frost them with a keto friendly cream cheese frosting they will taste okay!

I have found sugar-free sweeteners vary in sweetness too. I use Swerve quite a bit, and think that may be a great option for the next round! Hope you enjoy the current batch with some frosting! xoxox

Hello- I made these last night and while they did turn out pretty good, the sugar didn’t seem to dissolve, is that normal? I used lakanto monk fruit sweetener And followed the recipe exactly, except for the bakers chocolate part because I didn’t have any, so I added a tablespoon of cocoa powder to the melted butter. The fudginess is on point and so is the flavor, it’s just the crunch from the sugar crystals that throws me off. Any ideas as to why that happened or how to avoid in the future?

Perhaps a different sweetener, like Swerve or Truvia would work better for less of the crystal effect. I didn't notice that when I made them using monk fruit sweetener, but sugar-free sweeteners do have a tendency to act differently than regular sugar and are more difficult to dissolve. In any case, try the brownies with Swerve next time and see if that helps! xoxo

The article says Monk Fruit in the Raw contains no sugar alcohols, but the website cited above, https://www.intheraw.com/, says that it contains erythritol. Erythritol is considered the best-tolerated sugar alcohol, but I don't feel well after consuming it. Can you suggest how to modify the recipe for a sweetener that is just monk fruit? I think one would need to use a lot less, because it is very sweet.

Amazing! My first time trying Monkfruit or a keto recipe. I would bake it a little longer but even the batter was so good!

I'm so happy you enjoy the recipe! Thanks for the sweet feedback! xo