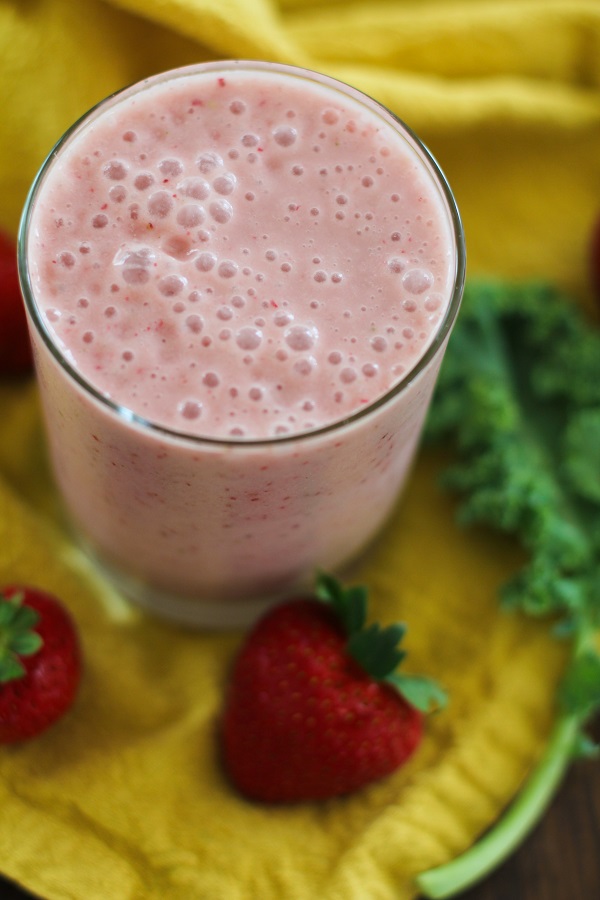 If you were wondering what your least favorite vegetable is, I can answer that question for you. It’s the kale stem. Pack it up, let’s go home.

Yeah, yeah, the stem alone doesn’t make a whole vegetable, but the point is, the majority (or all) of the time, we discard kale stems because…yeah…they’re a stem and they kind of suck. BUT, the stem has nutrients and the majority of the fiber in it. 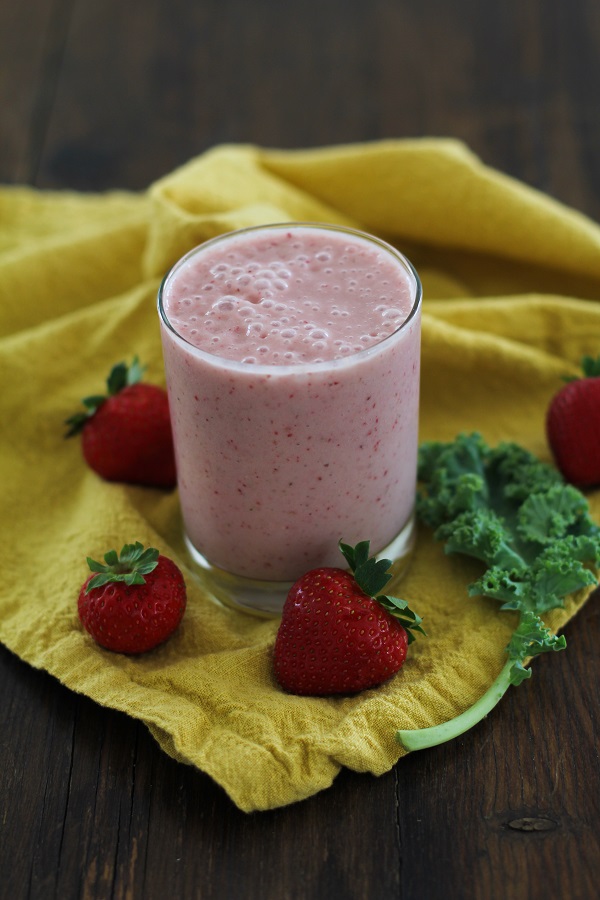 [Back it up with a heavy beat and base ] Kale stems (uh huh): it’s where the nutrients is at.

It’s no mystery that green smoothies are a thing. You, me, Maria, we’ve all shoved some spinach or kale in a blender with fruit and downed the nitty gritty beverage for a little fiber and vitamin injection. Who’s Maria? Got me.

But you can add other things to your smoothies. Things that you normally throw away. Things like kale stems. And that’s what we’re doing today.

Waste not, want not. Get it! Chest bump (grunt). 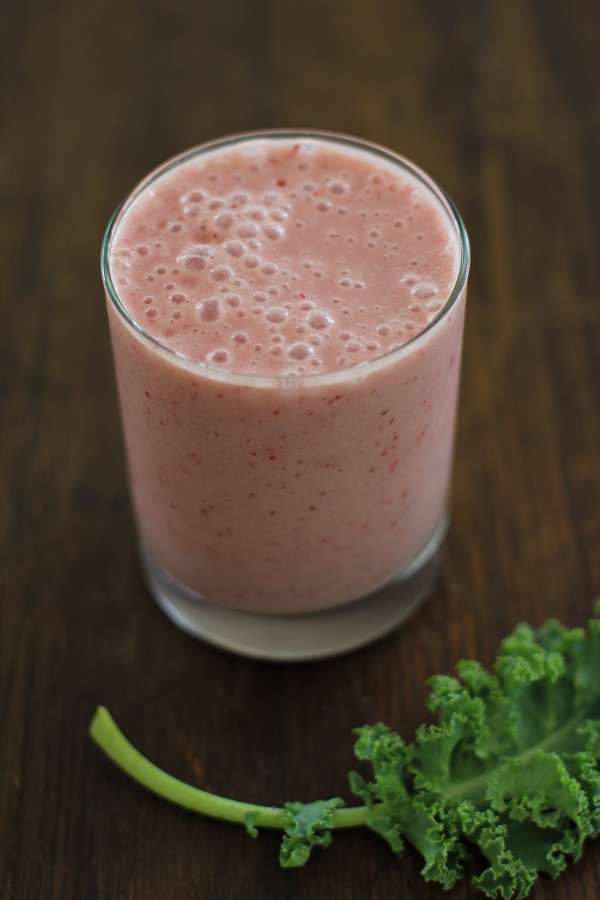 Okay, seriously. This is where I give you information. Kale stems contain a great deal of fiber; however, there is debate as to whether they contain less nutrition or more nutrition than the leaves. Like raw kale leaves (or any cruciferous vegetable), the stems can be difficult to digest. So maybe don’t over-do it if this is your first rodeo.

When adding kale stems to your smoothie, there are some basics you may want to know. Here’re some kale stem smoothie tricks of the trade:

Trick numero uno: Don’t add too many. I probably don’t need to explain this one to you.

Trick deux: Use ice in your smoothie. I normally use frozen bananas instead of ice, which results in an ultra smooth texture. The way I see it, adding ice makes the grittiness of the kale stem a little less noticeable. Less stand-outish. Less the center of attention. It allows you to shut your kale stem up. Whoa, aggressive! 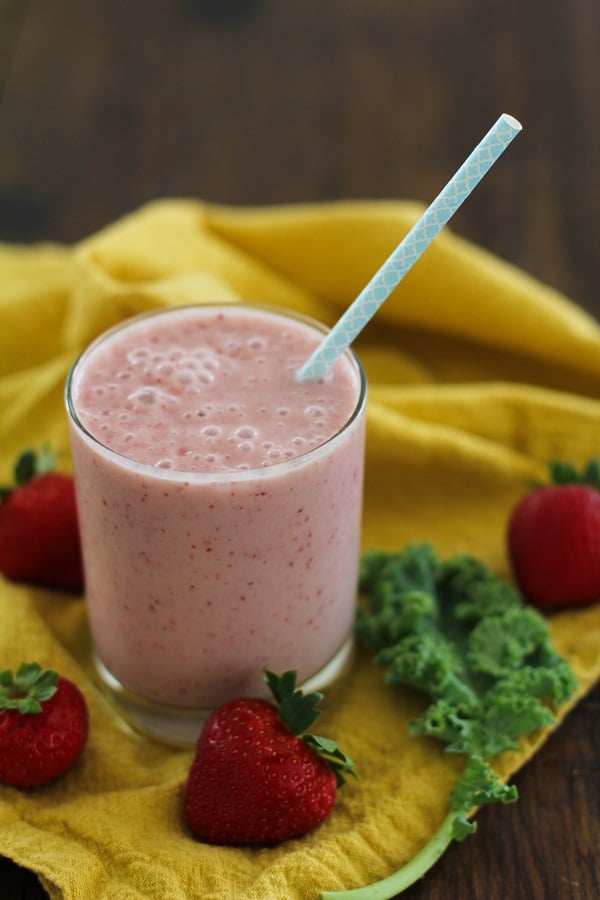 Trick drei: This isn’t a trick, but it’s a fact: kale stems taste less kale-y than kale leaves. Ergo, you don’t need to mask the flavor as much with a stem smoothie than a leaf smoothie. Ergo, strawberry banana. True story.

Trick quatre: High powered blenders make veggie-included smoothies a million times more tolerable.  I realize not everyone has a fancy blender (and don’t shy away from kale smoothies if you don’t have one), but my Vitamix

pulverizes anything I put in it and achieves uniform texture, which (like I covered in trick deux) is optimal.

P.S. Did anyone notice I used the same glass and napkin for this smoothie as I did two days ago for my roasted fig and walnut parfait? Is that like wearing the same pair of pants two days in a row? If so, that wouldn’t be uncharacteristic of me…in fact, I should wear the same glass more often…uh…I don’t know where I was going with that, but hopefully you do.

*You can replace the coconut milk with more almond milk

More things you can do with kale stems:

There is obviously a lot to know about this. I think you made some good points in Features also. Keep working, great job!vegan

Hey very nice site!! Man .. Beautiful .. Wonderful .. I'll bookmark your web site and take the feeds also? I'm satisfied to seek out so many useful info right here within the put up, we'd like develop extra techniques in this regard, thanks for sharing. . . . . .

Hi, I log on to your new stuff regularly. Your writing style is awesome, keep it up!|

Hi Julia i have a question. I'd like to add a raw pasteurized egg for health benefit and for thickening it just a bit! Is it ok to add it or would it ruin this delicious smoothie?

P.S also i am adding some rhubarb stems

Hi Haley! I don't think adding a raw egg would ruin the smoothie, and actually I'm very curious to know how it turns out. The smoothie has plenty of flavor, so I assume it would mask any egg flavor. Let me know if you try it!

Not only great information, but I love the writing! Marry me? I'm okay if it's only a "virtual" marriage. I'll take what I can get.

I will gladly accept your marriage proposal under the condition that we can have our virtual wedding on World of Warcraft. Thank you for your interest.