Dairy-free, refined sugar-free Paleo Vanilla Pudding made with only a few basic ingredients.

This paleo vanilla pudding recipe only takes a few minutes to make and is super straight-forward and simple! 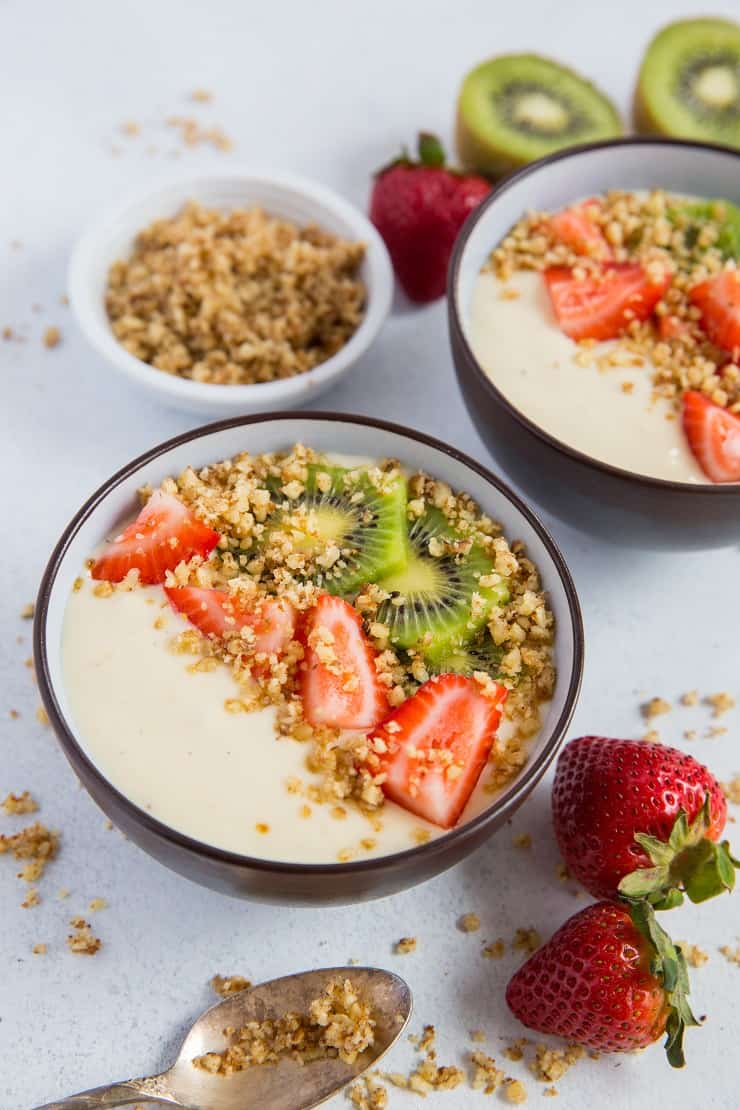 This morning, I dropped my good friend, Sandi off at the airport. As we pulled away from the airport, I told Garrett I felt like I lost a body part.

There is nothing more real than a binding friendship – the kind that keeps you together after moving to separate parts of the country and allows you to pick up right where you left off. The telepathic, empathetic, familial friendships that make you feel like you have everything you need.

Sandi lives in North Carolina and was here for a visit. She and I lived together for three years and we now live on opposite sides of the country.

While she visited this last week, we accomplished virtually everything we set out to do.  We saw a great bluegrass band, ate copious amounts of sushi, made two batches of banana puddin’ in the same night, busted out some power house workouts, shared Ethiopian food and drank some badass beer.

Even took a badass yoga class where the instructor reminded all the students of our badassedness.

Besides Sandi’s adorable dimples and southern accent, she has a relaxed approach to life and will giggle as she tells you stories about growing up in the south and dote on the southern foods we west coasters are so unfortunate to lack.  Like banana pudding. ‘Scuse me…”puddin.” 😉

Sandi and I set out to make homemade banana pudding – excited to determine if the from-scratch, healthier kind could trump the from-box kind.

I daresay, we made it! A healthier dairy-free, refined sugar-free version of vanilla pudding and a grain-free wafer made for an excellent healthier banana pudding. Since then, I’ve made the paleo vanilla pudding multiple times, and I typically top it with chopped nuts and fresh fruit.

So first, let’s discuss paleo vanilla pudding and then we can dive into paleo vanilla wafers to compile a dairy-free, refined sugar-free healthier version of classic banana puddin’.

How to Make Paleo Vanilla Pudding:

Open a can of full-fat coconut milk and heat it in a saucepan. Once the coconut milk is warm (but not boiling) and just barely begins to steam, take 1/4 cup of it and transfer it to a bowl with 1 egg yolk (note: do not use a full egg…just the yolk, or else you will end up with scrambled eggs). Whisk this mixture together very well.

Bring the remaining coconut milk a gentle boil – you want the liquid to be very hot but not boiling out of control. Whisk in the yolk/coconut milk mixture. Continue cooking and whisking for 3 to 5 minutes, until the mixture begins to thicken.

Remove the saucepan from the heat and whisk in the tapioca flour, pure maple syrup, and pure vanilla extract. Continue whisking until pudding base is very thick.

Transfer the pudding base to a glass tupperware container and allow it to cool 10 minutes before covering and refrigerating. Refrigerate at least 2 hours, or until the paleo vanilla pudding is completely chilled. 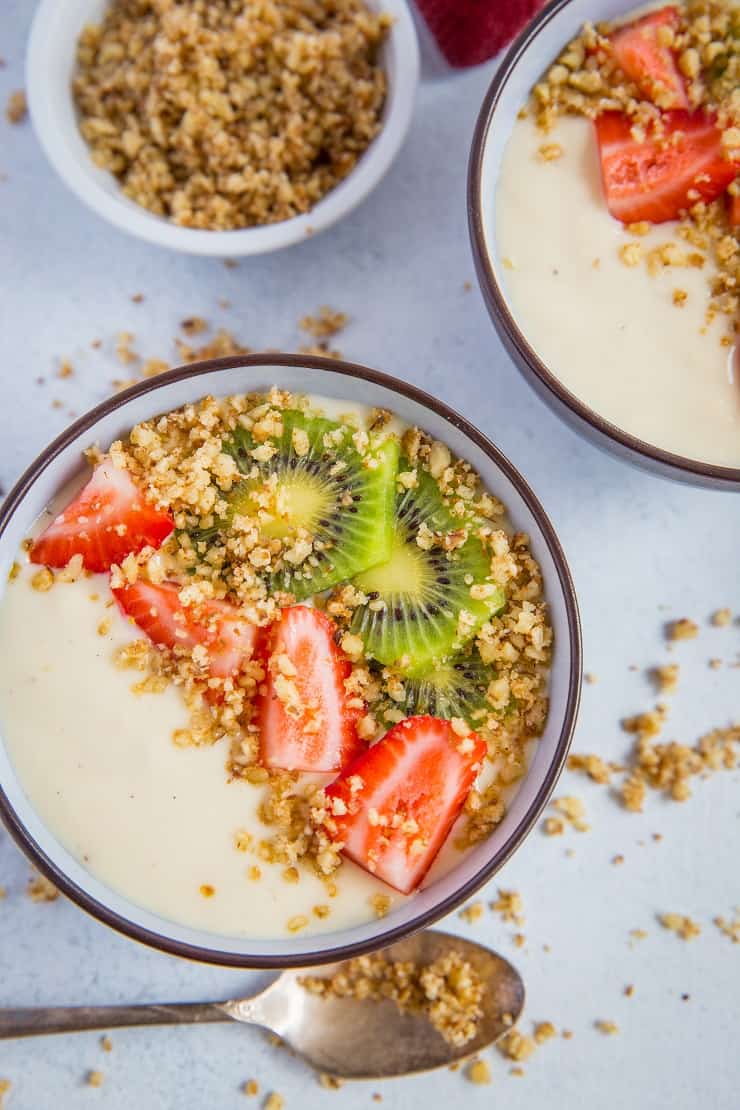 *You can also use honey, coconut nectar, or a zero-sugar sweetener such as xylitol or erythritol.

Yield 3 Serving Size 1 serving
Amount Per Serving Calories 296Total Fat 25gUnsaturated Fat 0gCarbohydrates 14gSugar 10gProtein 3g
The almond flour “wafers” we made turned out like shortbread, had a nice bite to them and were not overly sweet (which I enjoy).  This paleo almond flour cookie recipe was what we used in place of Nilla wafers.

In a bowl or mixer, combine the oil, egg and vanilla extract.  Add the almond flour, baking powder, salt and pure maple syrup.  Mix until it comes together in a ball and does not stick to your fingers, but is moist. 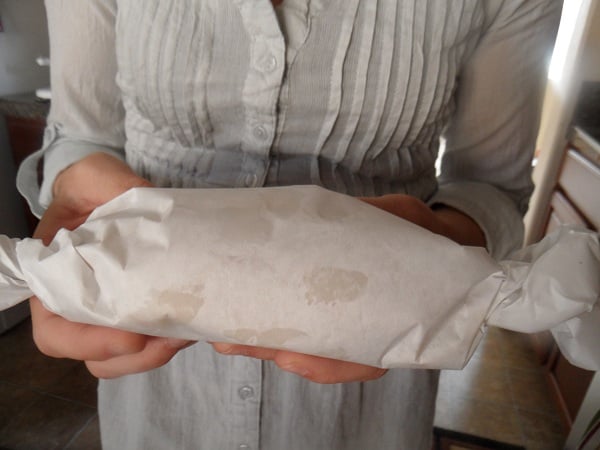 Preheat your oven to 350 degrees. Remove the dough from the freezer/fridge and using a sharp knife, cut ¼” rounds and transfer to a cookie sheet. 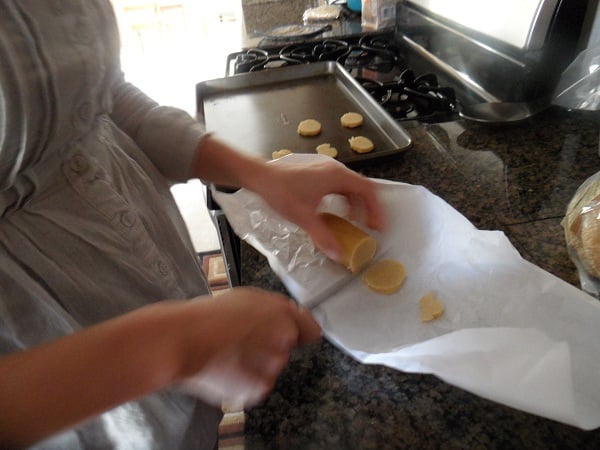 Bake for 12 minutes or until the tops are slightly golden.

How to Make Paleo Banana Pudding:

To compile the banana pudding, simply layer the pudding with wafers, sliced banana and whipped cream (we made Coconut Whipped Cream) if desired in a serving/casserole dish.

If you have the time and patience, allow the compiled banana pudding to sit in the refrigerator an additional hour or more – this makes the “wafers” nice and soggy and ensures the vanilla pudding and banana flavors come together.  Serve in abundance!

I was wondering if I can use Tapioca Starch instead of the egg yolk as a thickener?

Hi Susie! I believe that would work although it may make the pudding somewhat stringy or gooey. In my experience, tapioca starch is amazing up to a certain point, but after a certain amount is used it can make pudding recipes have funky texture. You may want to try using 2 to 3 teaspoons of beef gelatin (if you have it on hand) instead. Hope that helps! xo

Hi, I am a seasoned cook and baker. I followed the directions to the letter. I have made cooked cream and know how important tempering of the egg is. That went well, too. The only replacement used was arrowroot instead of tapioca flour. However, the pudding never thickened enough according to the direction. Perhaps it needed more arrowroot powder....I tablespoon did not seem to be enough for a can of full fat coconut milk to thicken.

Hi Marilyn! I've found there can be a lot of variation between brands of coconut milk, as some contain emulsifiers and some don't. Those that contain emulsifiers contain different amounts from brand to brand, so I'm betting the brand I used contained more gums/emulsifiers than yours. I'd say adding another tablespoon (perhaps even two) or arrowroot flour would do the trick. Hope that helps! xoxo

What if I don't have arrowroot or tapioca flour? Can I use GF flour or flaxmeal or almond flour? Thanks!

Hi there! I've never tested the recipe using anything other than arrowroot or tapioca flour, but based on my experience the only other substitution would be cornstarch. A regular flour would have a grainy texture and the pudding wouldn't thicken or turn out with the right texture. Hope this helps!

Would using arrowroot powder be an okay replacement for tapioca?

Also, what do you mean by thick? Should it be pudding thickness when you take it off the burner?

Thank you for your help!!

I stirred vigorously and but I guess the tapioca still did it blend in(clumped up) . It’s literally like eating tapioca pudding lol! Not a bad thing though. Next time I’ll take 1/4 cup of the coconut milk and Mix it with the tapioca, then blend that into the stove top mixture! Thanks for the recipe ??.