This post is Sponsored by Bob’s Red Mill. Check out more delicious healthy recipes, snag coupons and find stores near you at BobsRedMill.com! 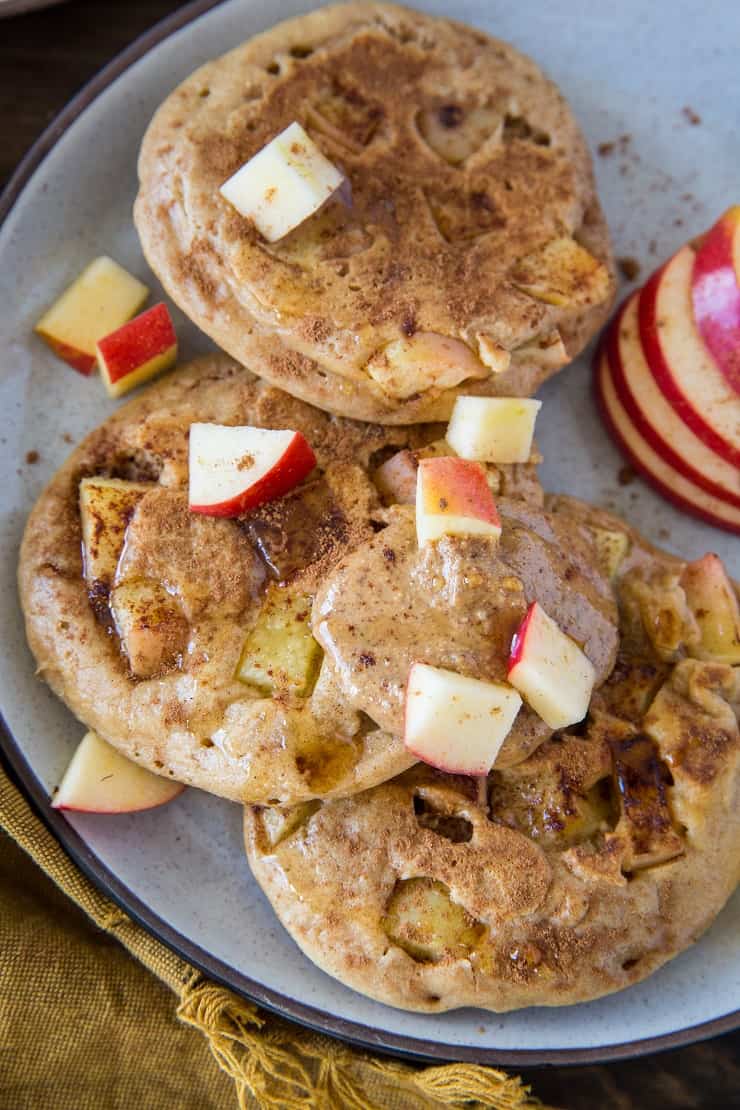 It’s that apple cinnamon time of year, and I’ve been craving some fall-inspired pancakes!

When Sarah from Making Thyme For Health posted her Fluffy Apple Cinnamon Pancakes a few weeks ago, I knew I had to try them out. I decided to go with a grain-free version, so I simply modified my Paleo Almond Flour Pancakes and voilà, these beauties were born!

As always, I used Bob’s Red Mill Super Fine Almond Flour and Tapioca Flour for the recipe. If you’re new to my pancake recipes, the basic gist is I’ve found the combination of almond flour and tapioca flour to yield a nice, fluffy pancake that is nearly indistinguishable from pancakes made with all-purpose flour. It’s my go-to combination in all my grain-free cooking and baking!

The pancake batter is super easy to make. You can either toss all the ingredients (except the chopped apple!) in a blender and blend until it’s combined, or you can use mixing bowls.

This time around, I used the mixing bowl method, so I simply whisked together the wet ingredients, then stirred together the dry ingredients in a separate bowl. I then poured the dry into the wet, and gave it a nice big stir. I always like letting my pancake batter sit for a few minutes so that the leavening agents do their work and the batter thickens up a bit.

I use a large non-stick cast iron skillet for cooking the pancakes, but if you have a pancake griddle, break it out. Heat it up on medium and add some avocado oil, coconut oil or algae oil to lightly coat the surface.

Once the pan is hot, measure out a scant ¼ cup and pour it onto the hot surface.

Now you get to add your apple chunks! Simply place apple chunks on top of the batter and allow it to cook for a couple of minutes. Carefully flip the pancake and continue cooking another few minutes, until the apples have softened a bit and the pancake is cooked through. 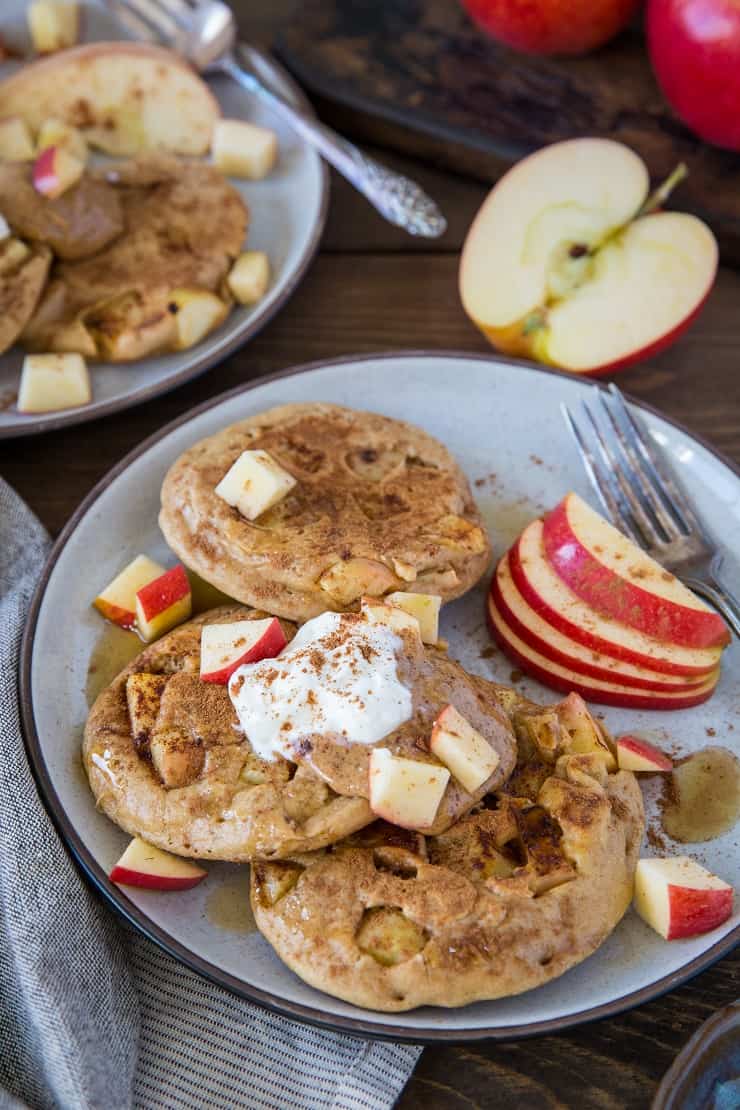 Repeat this process for all of the batter. 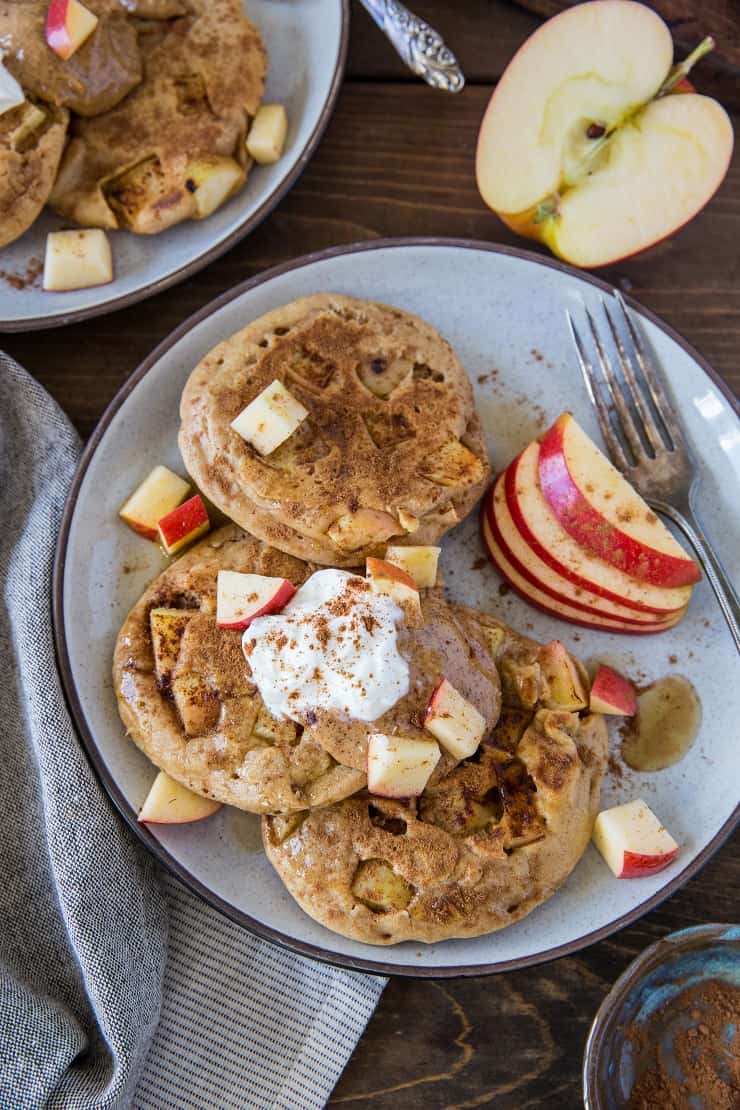 I like eating the pancakes with almond butter and a dollop of coconut milk yogurt – the nutty/creamy/cinnamony/tangy/fluff combination is just out of this world! You can also go with pure maple syrup and butter! 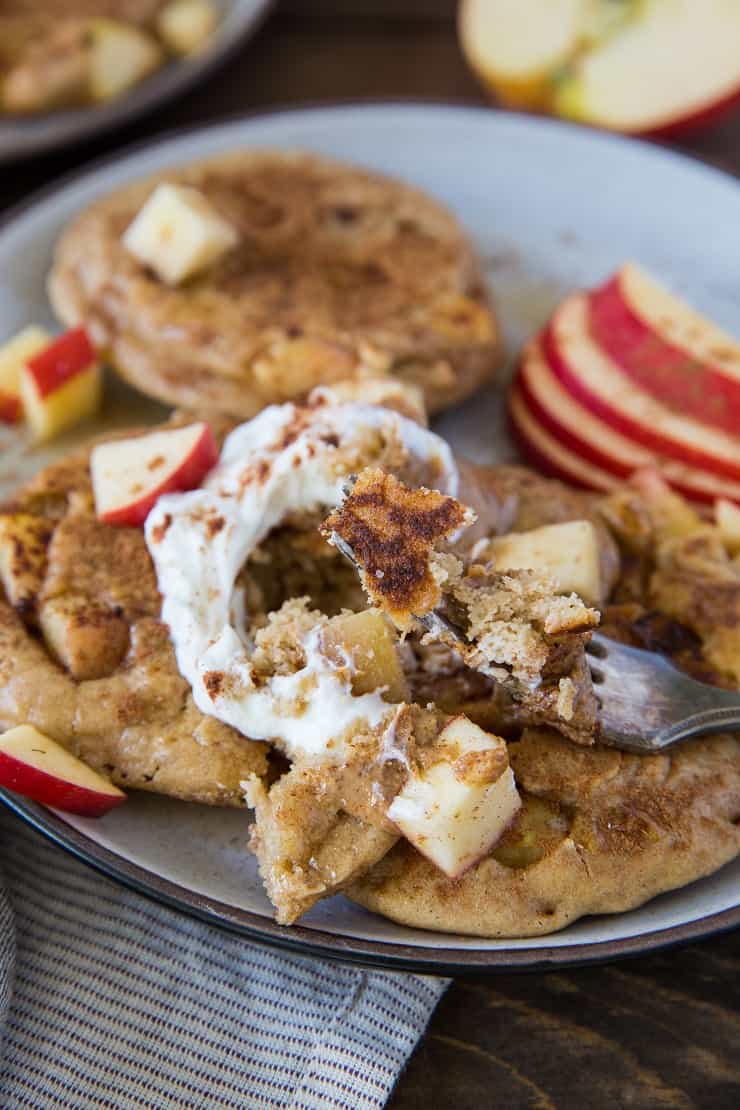 Whip these fall-inspired apple cinnamon pancakes up this weekend for the whole family!

I saw an error in your recipe. In the directions on number 2, you said to add the pure maple syrup. You meant to add the pure vanilla extract. Just thought you’d want to correct it. The recipe looks great!

How much maple syrup?

I actually don't add pure maple syrup to the pancake batter - I just drizzle a small amount on the pancakes when they're finished cooking. I find the apples and cinnamon give the pancakes a nice natural sweetness, so I leave the pure maple out :D Hope you enjoy!! xo

I am making these tomorrow morning! They look delicious. I had a bit of flour the other day and immediately felt it. So glad I can have yummy pancakes without issues.

I'm so happy to hear it! Let me know how you like them!! xo