6-ingredient chicken fajitas made in just 30 minutes! This simple recipe can be thrown together on any busy weeknight. 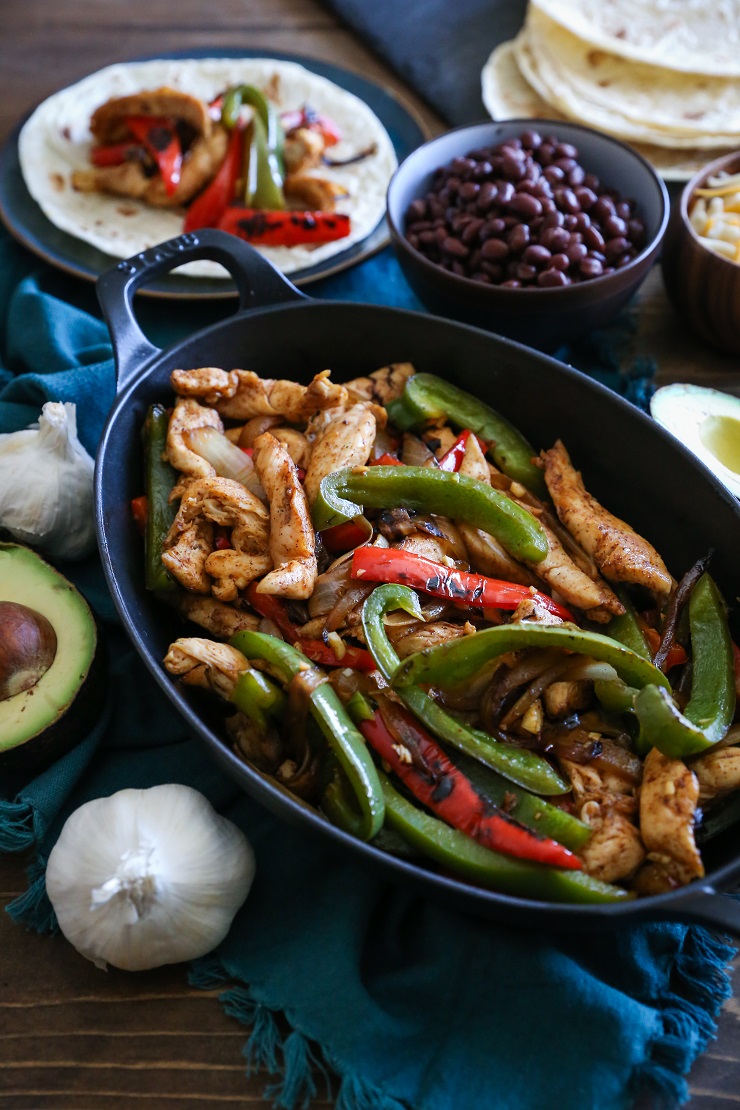 Given my extensive history with fajitas, I’m fairly shocked I haven’t posted a recipe until now. My mom made fajitas regularly when I was growing up, and guess what I order almost every time I go out for Mexican food?

Or, as the man likes to pronounce it, fuh-jeye-tuhs. <- Does it make your skin crawl? Just a little?

But as they say: better late than never. And the recipe I present to you today is probably the easiest stab at fajitas you’ll ever take.

How to Make Chicken Fajitas:

1.) Slice up the chicken and toss it in a mixing bowl with olive oil, chili powder, and sea salt so that it can marinate for literally a few minutes.

2.) Chop the onion and bell peppers while you’re heating your cast iron skillet(s).

3.) Sauté the veggies on high heat for 8 to 10-ish minutes whilst cooking the chicken in a separate skillet for 6 to 8 ish minutes. 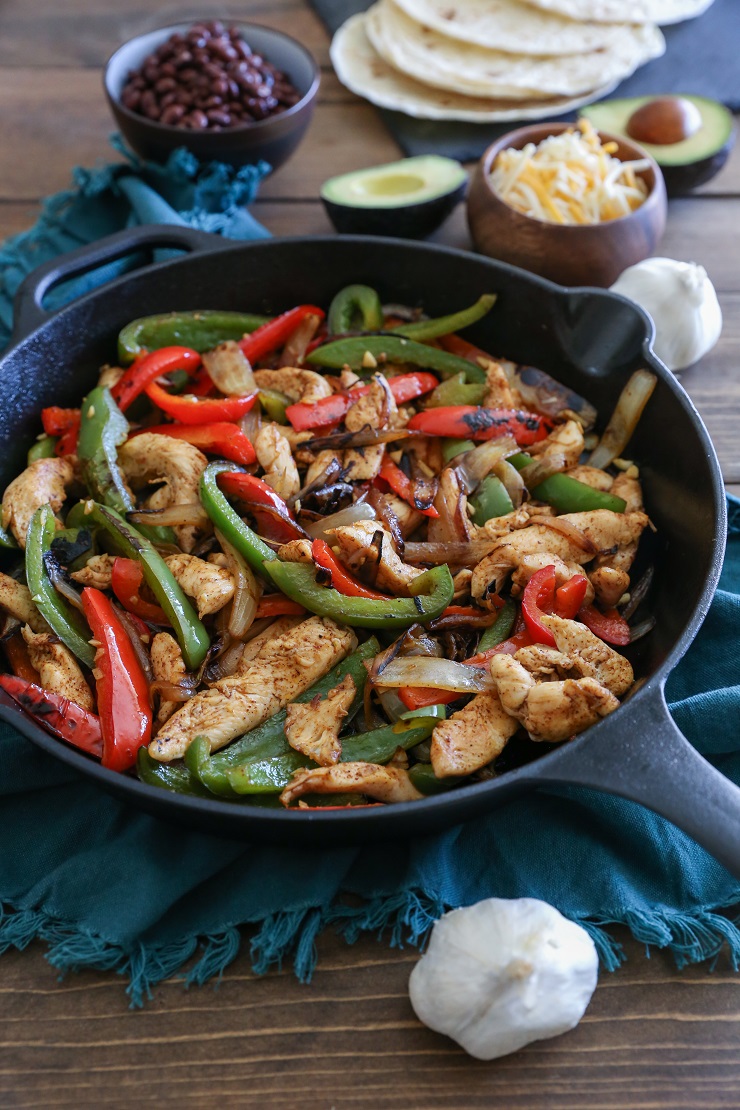 Speaking of step three…would you disown me if I told you I use two skillets to prepare the fajitas?

I know we’re all about the one-pot meal these days, but I happen to be fiercely frightened of over-cooked chicken and/or under-cooked veggies.

I pride myself on not being a super particular human, but when it comes to meat preparation, the Type A personality comes out.

You can still prepare the fajitas in one skillet by cooking the veggies first and then the chicken (separately…but using the same skillet), or by adding the chicken to the skillet with the peppers after they have been sautéing for a while. No matter your approach, the fajitas will come together super quickly.

Prefer steak or shrimp over chicken? Do it.

Back to our story. 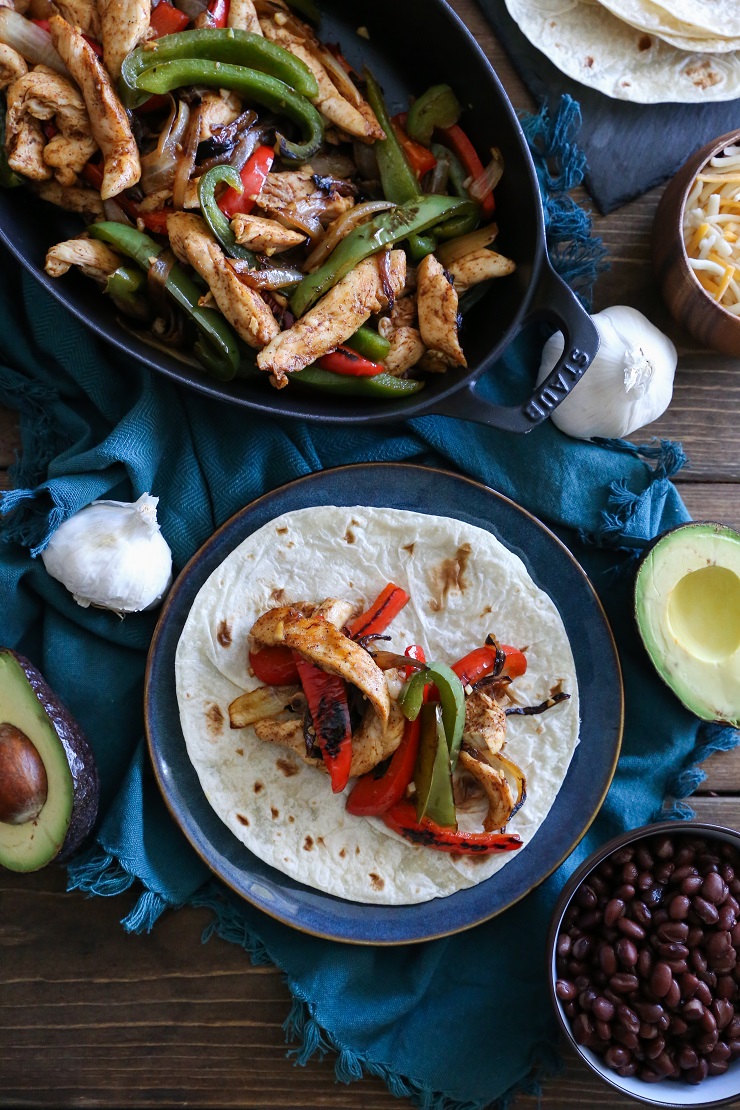 And the best part? Plating them!

Because fajitas have so much flavor on their own, I don’t think they need a ginormous amount of doctoring.

Maybe a dollop of sour cream and/or shredded cheese if I’m feeling frisky. You can do refried beans, you can do some sort of cabbage slaw, you can top with a fancy chipotle sauce. You can be the star in your own little show (<- Joe Nichols reference, anyone? You’re so very welcome.)

You know what else I do? I make fajita bowls with brown rice and toppings. BOOM tortilla-free.

To make this recipe paleo (or Whole30), use ghee, grapeseed, algae, or coconut oil to cook the fajitas.

You can serve the fajitas over quinoa, or if you’re like me and you’re of the school of thought that rice is an acceptable food, you can go the rice bowl route. 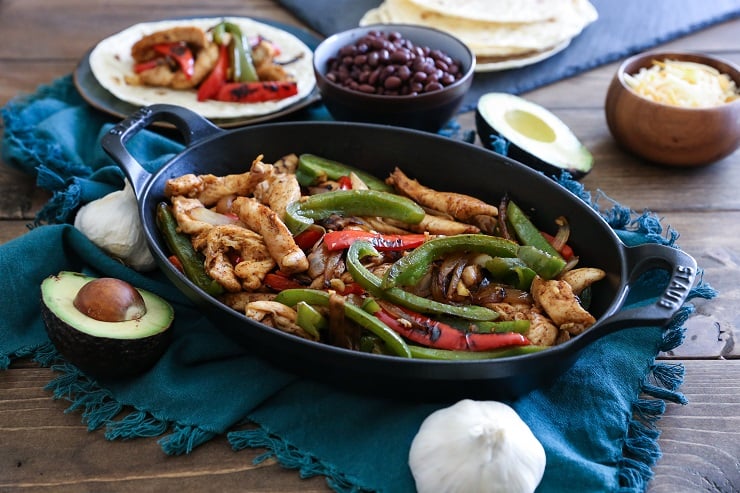 *You can also use olive oil or grapeseed oil.

Julia, you are such a delicious cook. Thank you so much!!!

You're so sweet! Thank you! xoxo

I'm making this now, can't wait to try it! I just wanted to let you know I didn't see onions in the list of ingredients. :)

Oh jeez, I can't believe I left out the onion! Thanks so much for catching that - I added it to the ingredients list :) I hope you enjoy the fajitas! xo

You know what's really sad? I don't think I've ever actually had fajitas....this is a tragedy! I love any chicken dish!

Ohhhh girl, you've gotta try them! They're just the easiest things to make and are so fresh and tasty! :) Let me know when you try them.

My kids would love this! Your photos are so pretty!

I'm so happy to hear it, Karen! Fajitas do definitely seem to be kid-friendly..I hope they enjoy!