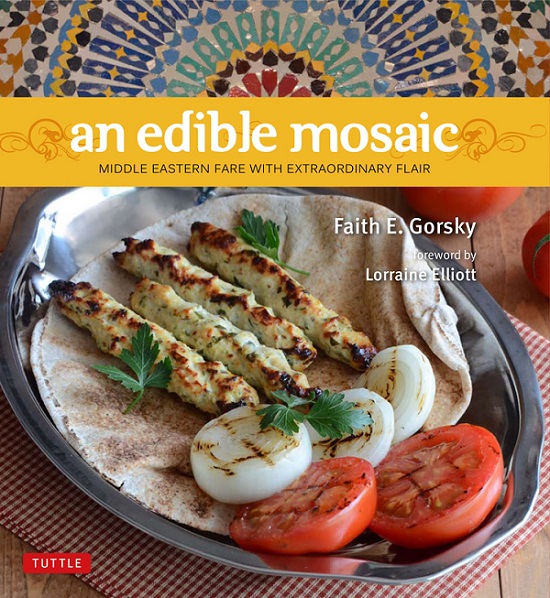 On November 6, Faith Gorsky from An Edible Mosaic released her first cookbook,  An Edible Mosaic: Middle Eastern Fare with Extraordinary Flair. Along with some other bloggers, I am participating in Faith’s virtual book launch party and am honored to share one of her recipes with you!

Faith has a rich and wonderful story, which shines through on her blog and in her cookbook. After getting married, Faith spent six months in the Middle East, where she learned a great deal about Middle Eastern cuisine; she felt such a connection with the places she traveled that she has since returned four times and has deepened her understanding of the culture and food. 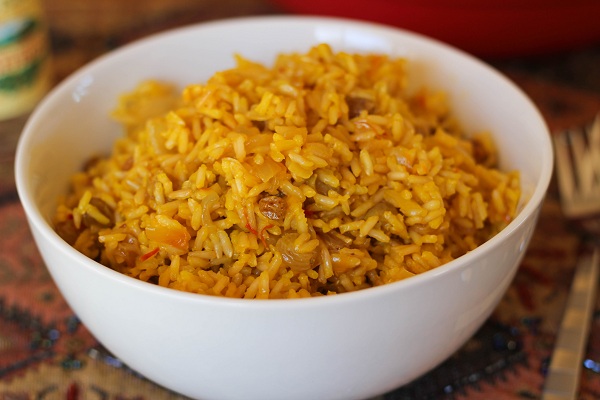 Her book is comprised of more than 100 Middle Eastern recipes (most of which are from the Levant) all of which Faith has diligently streamlined for a modern and approachable take on delicious traditional Middle Eastern dishes.  Her book can be ordered through Amazon and Barnes & Noble.

The recipe I am sharing with you is Saffron Rice with Golden Raisins and Pine Nuts.  This rice is big on flavor and aroma and was so simple to make with Faith’s detailed instructions. She suggests serving the rice with any type of curry dish, and I did just that! 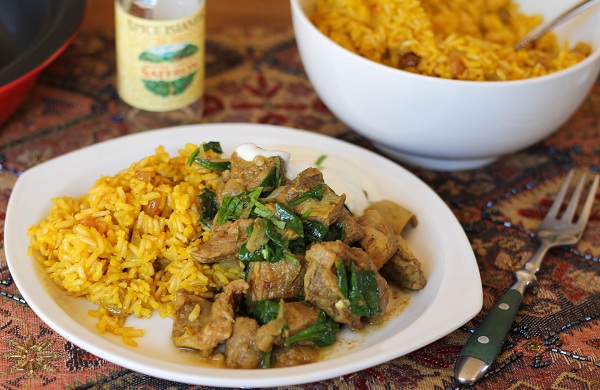 I made lamb curry (will share the recipe with you next week) to go along with the rice and was astounded by how well the two dishes fit considering I had never tried her rice before.  I typically don’t think of rice as a stand-alone dish, but Faith’s recipe has so many wonderful elements to it that it really has a voice of its own.

After you check out the recipe (she also includes a variation of the recipe), head over to Faith’s website. She’s hosting a giveaway of all sorts of goodies, so be sure to go and enter (and also give her a big pat on the back for her big accomplishment)!

Cooking Time: 20 minutes, plus 15 minutes to let the rice sit after cooking

OPTIONAL Add two pods of cardamom, two whole cloves, and one 2-inch (5 cm) piece of cinnamon stick at the same time that you add the rice.

Cooking Time: 20 minutes, plus 15 minutes to let the rice sit after cooking 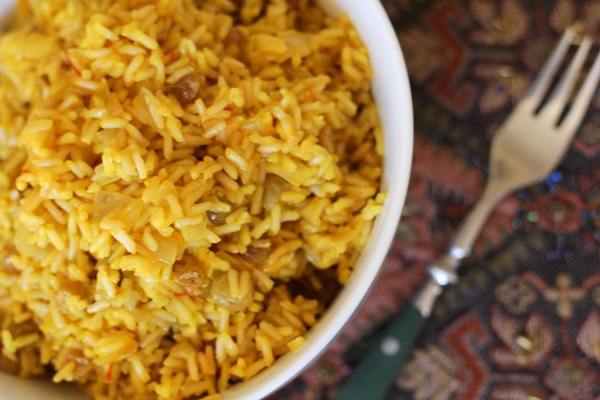 For some reason, I automatically like any recipe that has golden raisins in it. I don't really know why, other than I think that golden raisins are kind of pretty (food nerd alert!)...And I'm all about this rice! Lovely.

I've been away from your site for WAY to long! Your new design looks incredible. Love the new look!! Great recipe, it looks so yummy!

Thank you so much for visiting my nutrition blog. Faith is such a lovely person and I am so excited for her. I am also looking forward to your lamb curry recipe - it looks delicious and perfect with Faith's saffron rice.

That looks wonderful! Especially alongside a curry... I'm so excited about this cookbook! : )

Mmm, your rice looks wonderful! I love that you made curry to go with it. I love curry but I'm crazy for rice and just ate it by itself and with roasted veggies :D Not too exciting, but yummy!