Roasted Celery Root and Carrots with Parsley and Dill

Home » Roasted Celery Root and Carrots with Parsley and Dill

It’s Monday! Have some celery root. 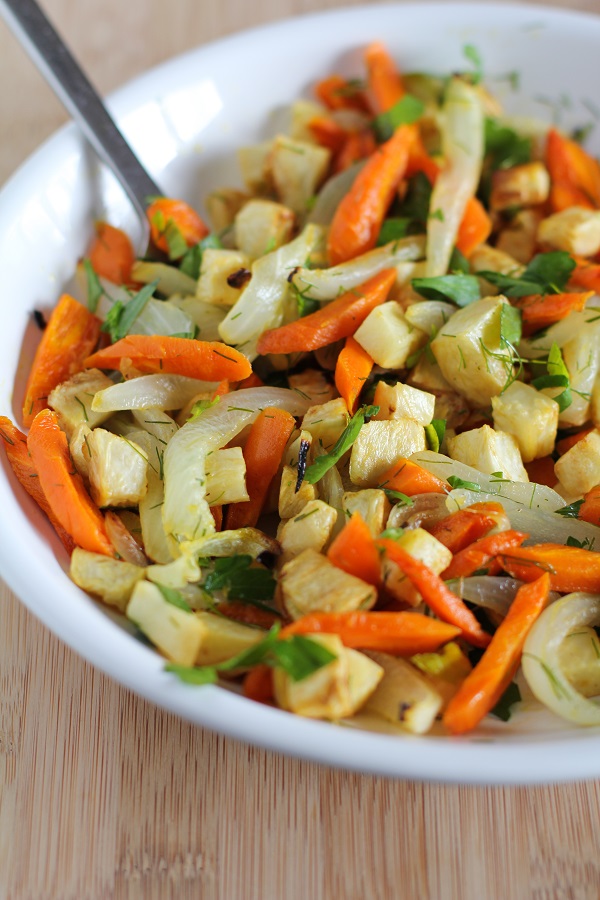 Celery root. Let’s make it the next sweet potato.

There are two types of people: those who love celery root and those who have never tried it. Meaning, no one has ever told me they don’t like celery root.

Not liking celery root would be like not liking Breaking Bad. You don’t want to be one of those people. 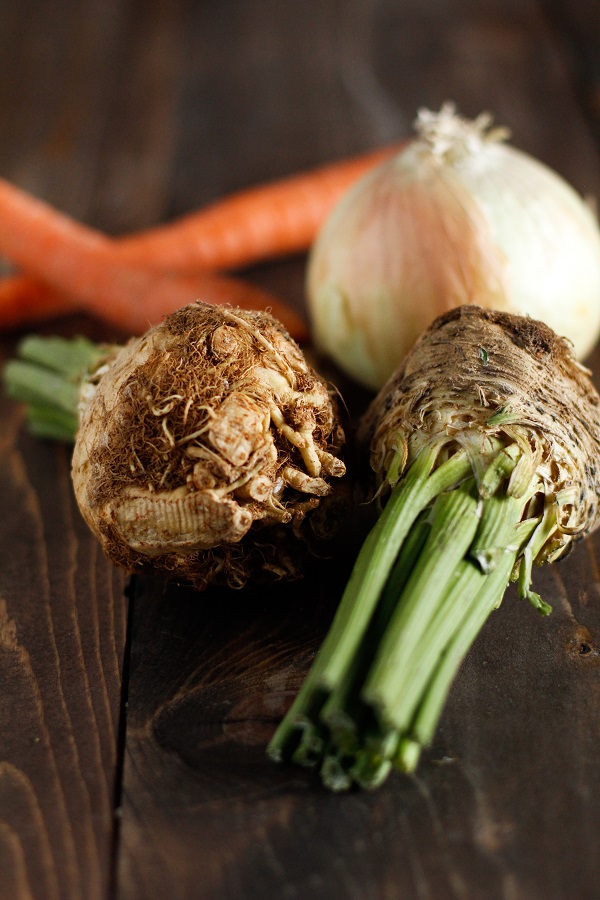 Given my love for celery root, I’m not sure why I haven’t posted more recipes using the vegetable.

That’s not true, I know why. It’s a pain in the beehive to clean and peel. But once you break the seal, it’s so worth the effort.

I was eyeing the root section in my grocery store last week, and while I normally pass by celery root (celeriac), I was all, “hot daaaawg, I haven’t whipped up a celery treat in ages!” So I brought a couple home and what happened next is what you see right here. 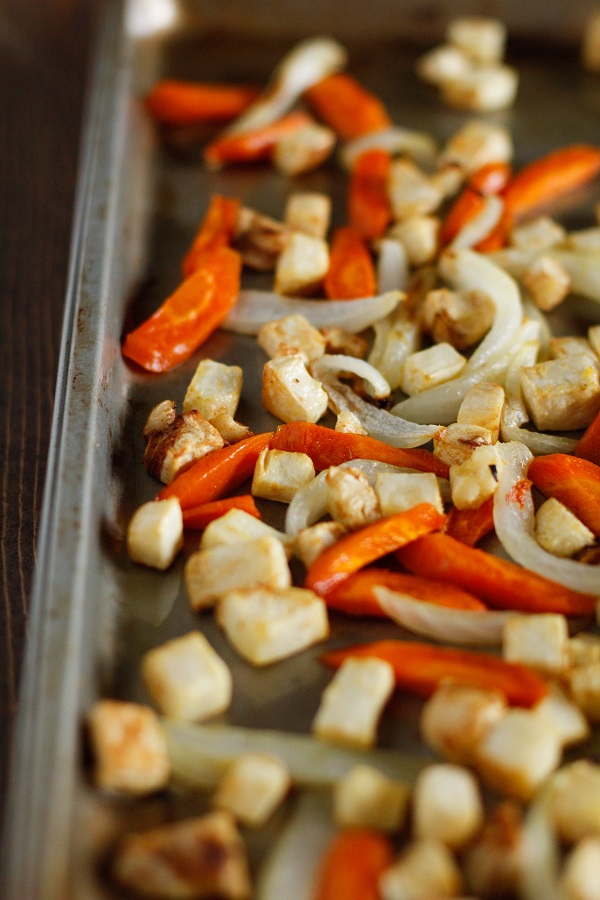 Let’s dig a little deeper on celery root, folks. Here’s what you need to know –

What the haystack is celery root?: Celery root, known as celeriac, turnip-rooted celery, or knob celery, is related to celery, and is a considered a bulbous root vegetable.

What does celery root taste like?: Celery on steroids. It has a deep celery, nutty flavor, with a creamy, somewhat potato-y texture.

How to cook with celery root: Because celery root is surrounded by a thick, gnarled peel, it needs to scrubbed and peeled using a sharp knife. A potato peeler won’t break the stride, oh no; so I recommend using a pairing knife to remove the peel. My favorite way of preparing celery root is chopping it and roasting it on its own or along with other vegetables. I also like to steam it and puree it into celery root mash (which is an excellent replacement for mashed potatoes) or into soup. While you could absolutely use celery root raw, I prefer it in its cooked form.

How to select celery root: Choose roots that are hard and don’t give when you squeeze them. Make sure the stalks coming out are green and snappy. Because celery root is a hearty vegetable, you can store it in a root celery or in a plastic bag inside of your refrigerator for quite a long; however, I read that as celeriac ages, the nutrients fade, so it is best to use them within 5 to 7 days of purchase.

Health Benefits of Celery Root: Celery root is full of Vitamin K, antioxidants such as Vitamin C, beta-carotene and manganese, folate, and potassium. It helps provide regularity in your digestive system and is a heart-healthy food. 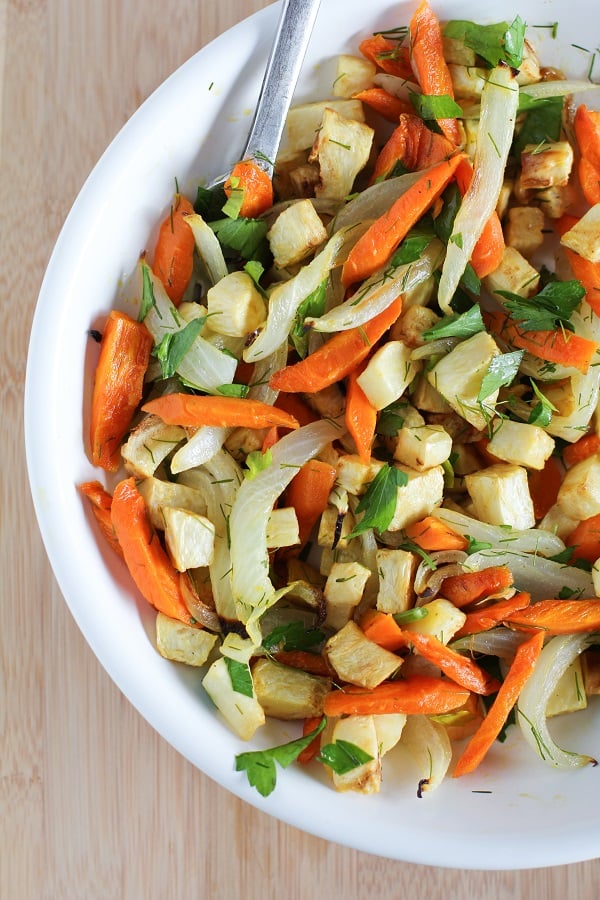 The only thing I would have done differently for this recipe is I would have made about five times the volume.

I got a liiiiittle carried away with the eating portion of the recipe development process. As in, I probably shouldn’t have consumed the whole batch in one sitting, but I went ahead and did so anyway.

Have you heard? Celery root is the new sweet potato. 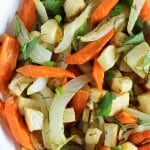 Roasted Celery Root and Carrots with Parsley and Dill 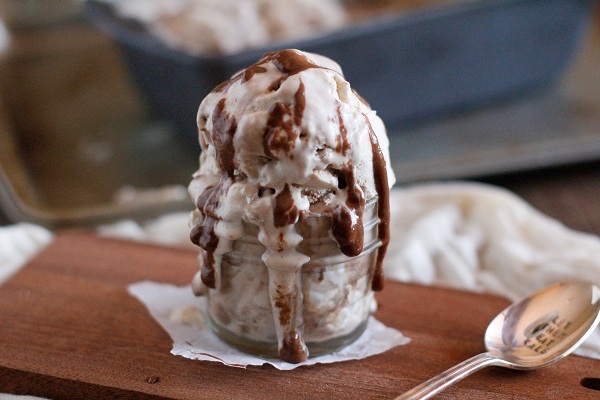 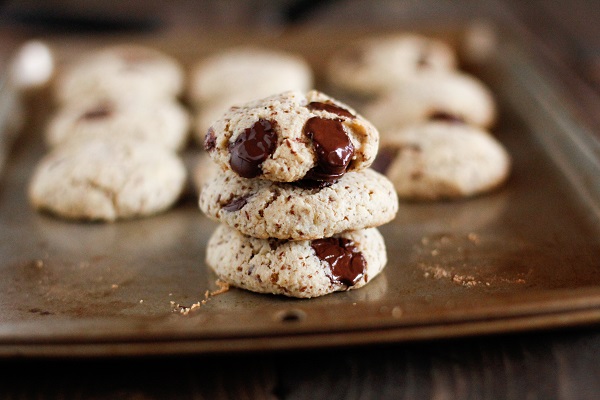 So....I am actually one of those people who doesn't like celery root. It's just...CELERY. Blech. I can't help it. Don't hate me! But I would totally have this with sweet potatoes instead. And love it.

It's like the ugly duckling of cauliflour's cousin. Same nutty taste, no? I made GIANT soups from a bulb for a whopping .75 cents. Its greatttt :)

I am always looking for a new vegetable to roast!

It's sooooo good! Hope you give it a whirl!

Ju, I've gotta say you are the queen of roasted veggies ;-) I love all your roasted veggies recipe. They make my mouth water!!! This recipe looks so so flavourful and tasty!

Ermagerd roasted celery root is my jamalam! No seriously, I love it. This whole situation you've got here sounds might tasty!