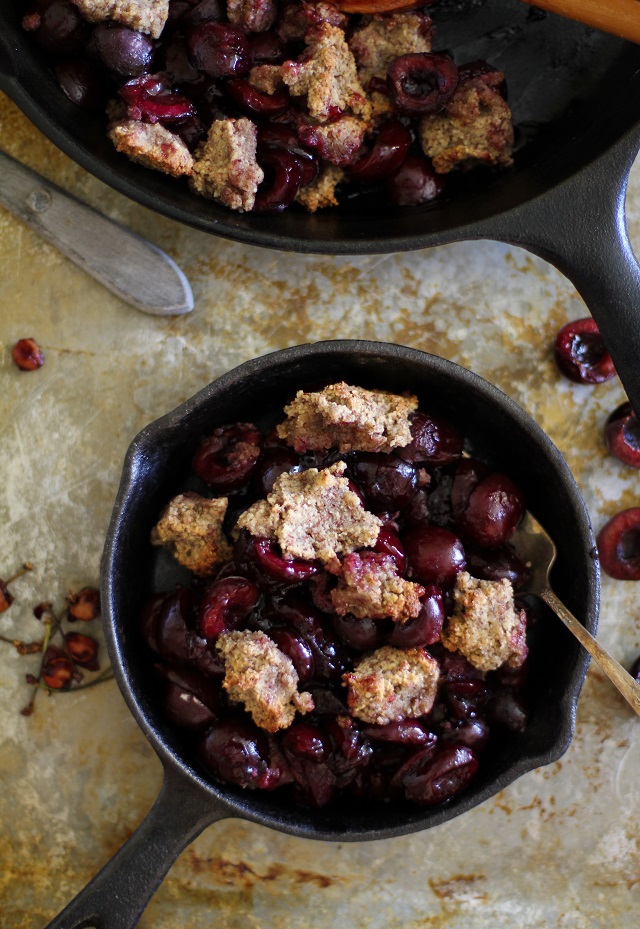 Sometimes we need a vessel in which to put all of our over-purchased fruit, and that vessel is the crumble.

Slash cobbler if we’re into biscuits.

A couple of weeks ago (mmmhmmm, weeks, sons and sistas), I purchased one too many bags of cherries, and the entire thing traveled with me up and down mountains on three weekends, sitting untouched on all the car rides and in all the refrigerators. Until finally, I was like, “I had better do something about this entire dreadful bag of cherries that keeps following me around slash tempting me to make ice cream, chutney, muffins, scones, stop it you devilish little pitt mongers, you.”

So I made a crumble. Bangity boom, there goes the good part of a bag of cherries.

This cherry crumble is baaaasically the same recipe as the Raspberry Hazelnut Crumble I showed you a couple of months ago…and also puh-retty much the same as the Paleo Strawberry Crumble that broke the internet last year. Same thang, different name.

Alls you do is pitt the crap out of 5 cups-worth of cherries…it’s an exercise in patience and also very therapeutic…music pairing suggestions: Salt n’ Peppa Pandora radio. …And then mix said cherries with a few ingredients like tapioca flour (for thickening) and pure maple syrup (for sweetening). The crumbleage topping is nothing more than some hazelnut flour (or almond flour), coconut oil, and pure maple syrup. It’s basically the easiest thing you ever did since breaking up with your middle school boyfriend. <- Don’t tell him I said that.

So eat it for breffest is what I do! But lunch, too. Maybe linner. Brinner. Brunch. What have you.

You can top with coconut whipped cream, serve with ice cream, maybe get a little yogurt action in there…or go plain jane, which is always fine by me.

Get your cherry antioxidants, get your hazelnut proteins, your healthy fats, your dessert vitamin. It’s all in there, my friends.

ALSO: if you haven’t entered my summer faves giveaway yet, you might as well take a looksyyyyyy.

How many servings does this make?

I know this is a silly question, but why is it called "raspberry filling" when there are no raspberries in it, and it is full of cherries?

Thanks so much for catching that! It was a silly error on my end...I corrected it. Hope you love the crumble. xx

This sounds so good. i lkove cherrys, thanks for sharing this recipe.

Is it bad that I want to eat a crisp or a crumble every night of the summer? I mean, how can you beat a dessert that takes 15 minutes to prep and is full of summer's best fruits? Love, love, love the look of this. Hazlenut meal is totally new to me, but I'm intrigued.

I have a similar situation happening with strawberries right now. WHY DO THEY DO THIS TO US?! Crumbles need to be made, like, yesterday.