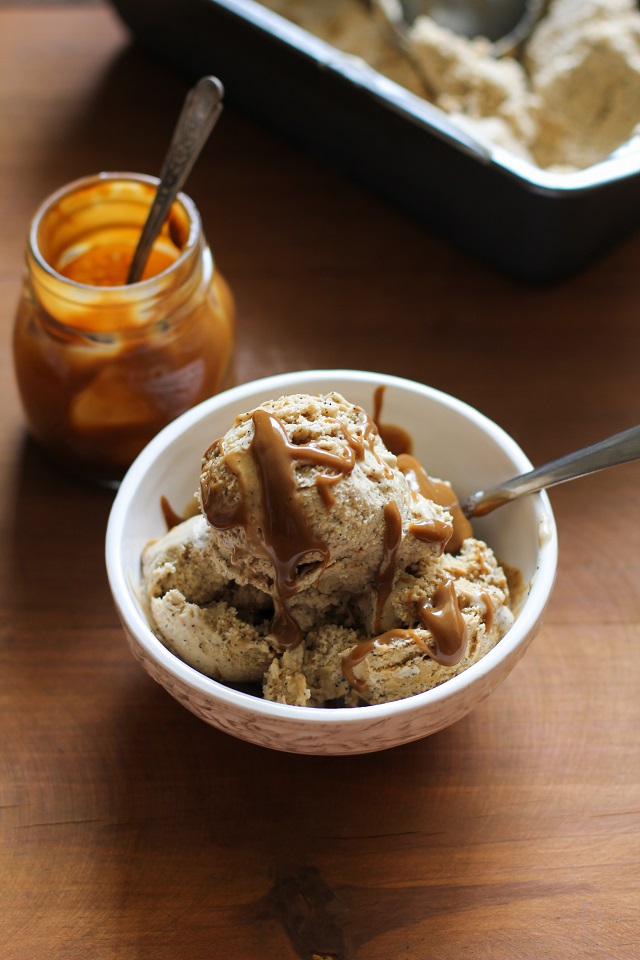 Dulce de leche ice cream and I have a sultry history. Back when I had an obsession with Häagen-Dazs Dulce de Leche ice cream. it was my every-Friday-night affair. I didn’t even know what dulce de leche was (just that it tasted like buttery bliss on my tongue buds) until I became best friends with a girl from Bolivia, and she explained the whole thing to me. To summarize: dulce de leche (or manjar, doce de leite, cajeta, courtada, confiture de lait, HaPå, or варёная сгущёнка) is a big.deal. 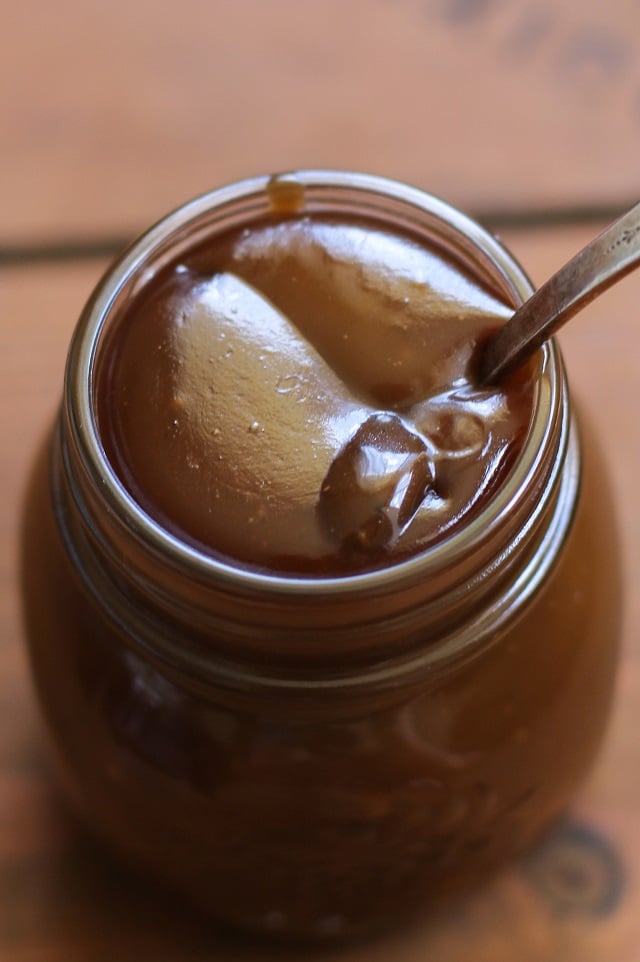 Dulce de leche. It may as well be a universal language, as many countries around the world have their own take on it. Made by slow cooking milk and sugar (or sweetened condensed milk or coconut milk depending on the country), our equivalent of dulce de leche is homemade caramel.

In case you’re unfamiliar, the phrase dulce de leche means “candy (sweet) of the (made from) milk.”  Many Central and South American countries have their own take on dulce de leche, as does Portugal and Spain…and – well – the rest of the world. For instance, in Chile and Mexico, this caramel substance is referred to as “manjar,” and it has a bit of a vanilla flavor to it. Cubans tend to make it using curdled milk and call it courtada. In the Dominican Republic, this treat is more of a fudge than a sauce, and has cinnamon added to it. Puerto Ricans sometimes make dulce de leche with coconut milk, just like we’ve done here today. A very similar rendition of dulce de leche is popular in France, Norway, Russia, and many other countries worldwide. 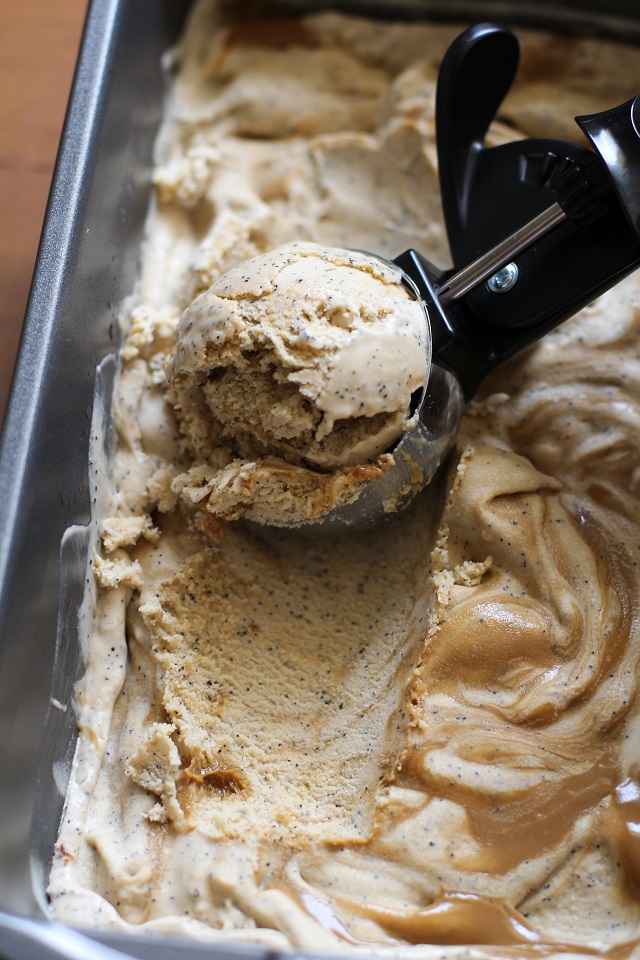 Perhaps my favorite part about all this, other than the fact that each nation has its own caramel dialect, is the fact that it is customary in many countries to spread this delight on toast and eat it for breakfast. I went to South America twice a number of years ago, spending a total of three months in Chile and Peru. Each morning, I ate fresh fruit with yogurt and toast with butter and dulce de leche (or manjar as Chileans call it). I even brought back bags of the stuff, which lasted be approximately 8.7 seconds when I got home. A full-tilt caramel addiction is a tough one to kick! 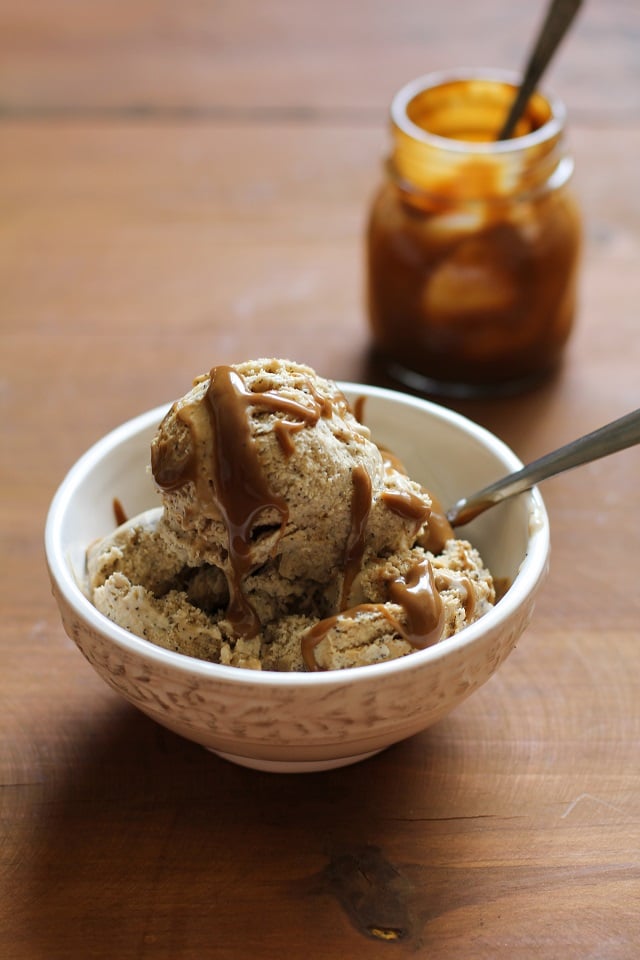 So this ice cream. You basically make a batch of vanilla bean coconut milk ice cream (sweetened with pure maple syrup or dates) and then pour in nearly an entire batch of homemade sugar-free Paleo Salted Caramel. While the end result does not taste exactly like the store-bought version, you are left with a sweet, creamy, buttery dessert that makes your face hole go “ah shit, yeah!” Just be sure to save a smidge of the caramel sauce for serving the ice cream, because: wowzaaaahs! 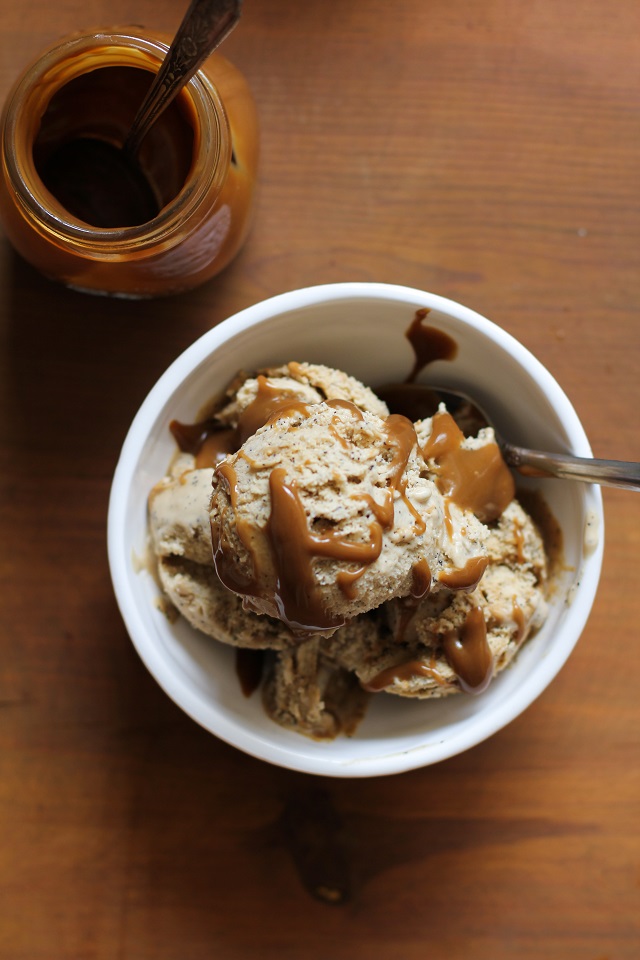 And that is all, folks. All it takes is some whisking and churning to make this copy cat dulce de leche coconut milk ice cream that happens to be refined sugar-free. You can easily make it vegan by leaving the butter out of the caramel. And now I’m curious to know: when was the last time you dulce de leche-ed?? 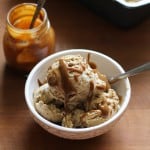 *You can also use 6 to 8 pitted medjool dates to sweeten the ice cream. If you choose to go this route, soak the dates in very hot water for 10 minutes to allow them to soften. Strain the dates, allow them to cool, then add them to a blender with the rest of the ice cream ingredients. **Replace vanilla beans with 2 teaspoons of vanilla paste or 2 teaspoons vanilla extract 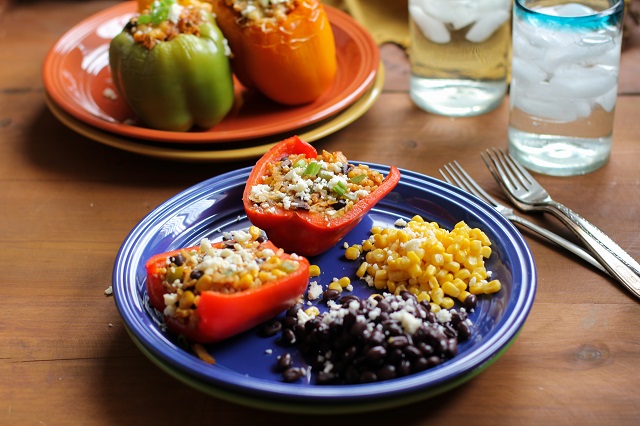 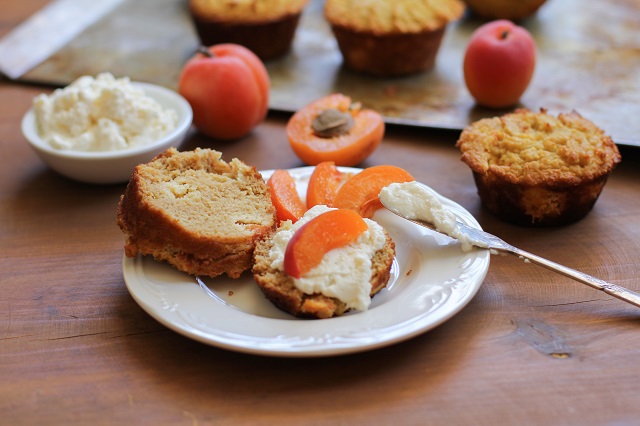 This is was the first time I've ever made homemade ice cream. I'm allergic to dairy and sunflower and haven't found any at a store that I can have. This was an amazing treat for this pregnant Momma!!! Thanks :)

You got it! I'm so happy you enjoy the ice cream, Jackie! And huge congratulations on the addition to your family! :D

OMG OMG OMG I am overwhelmed by the depth of deliciousness in this ice cream-that dulce de leche looks irresistible and that ice cream is just perfection!

Paleo salted caramel?? Not sure how I missed that. Dulce de leche is my jam (in both senses of the word!) and this looks like perfection.

OMG. Please introduce me to the ice cream's brother so I too can be in on this sultry relationship. What a dream boat!!!

Hi! I loved this post ... I'm chilean and I'm always aware with eating healthy ... but when it comes to manjar I can't resist haha Very good variation