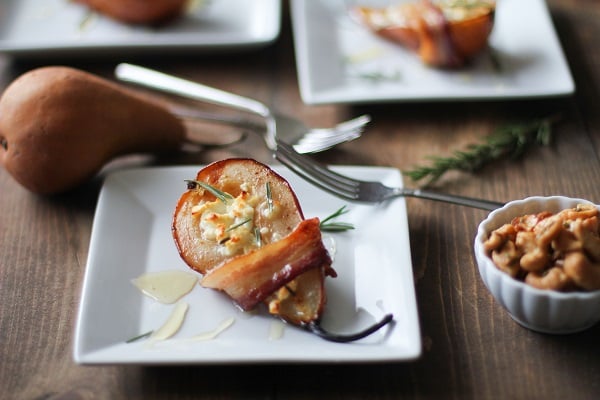 Ooookay, sheeeeesh…I guess you can make these as an appetizer for your Thanksgiving feast next week. But you may want to forewarn your guests that you’re feeding them breakfast for finger food. A little prefacing never hurt a situation.

^^^Do you see what I did there? That’s called, Psychology in R. 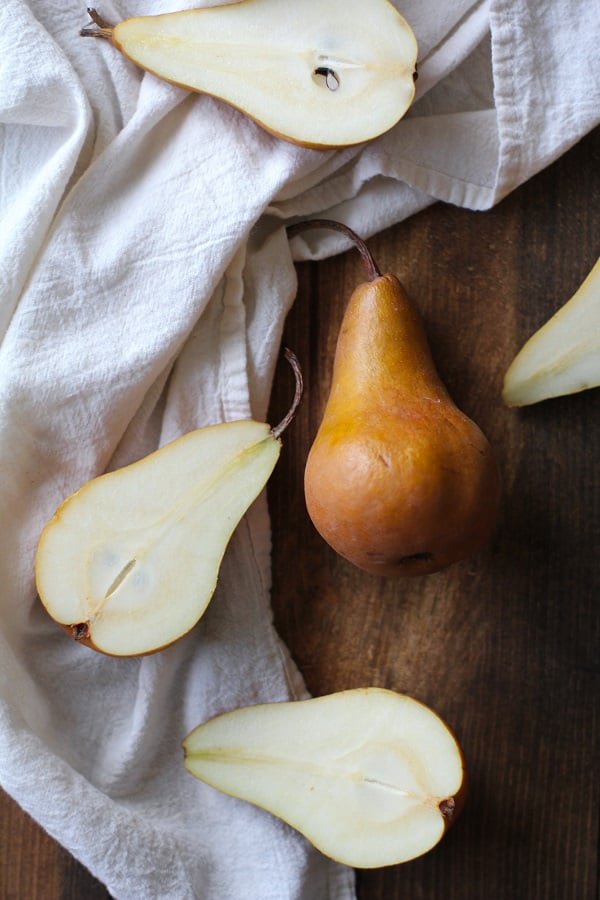 I have some Q’s for you.

Goat cheese. Have you ever had it roasted in the oven?

Have you ever wanted to be wrapped in bacon?

Pears. How do you feel about them?

As we all know, I’m not an uuuuuuuuge fan of fall/winter fruit, but as it turns out, stuffing the dang things with goat cheese, engulfing them in bacon, roasting them in the oven, then razzle dazzling them with honey is a two thousand percent improvement upon the pear. Like.whoa. So if you’re alreadyyyy a pear fan, I can ooooonly imagine what these beauties will do to your facetrap. 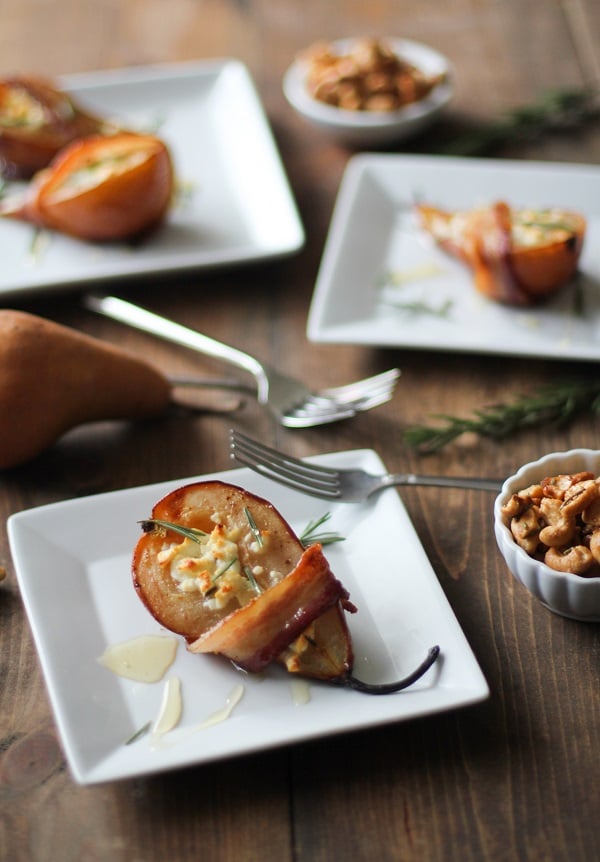 Recently, I was faced with the dilemma of having too many slices of bacon and nowhere to put them. You’re looking at me like, “Oh, hun…you just put those straight into your mouf.” <- I could squeeze you.

BUT being the bacon-conscious blogger I am, I wanted to purpose the bacon for something that could help you out in life, too. So I sat on the bacon – figuratively, oooof course – until something jumped out at me that I could share with you. As fate would have it, I was thumbing through the November issue of Cooking Light and crash landed on a TWO-PAGE spread that was titled, “Bacon.” I did a somersault double backflip triple lutz because the spread included 20 some easy recipes that all.involved.bacon. Options! Marv! Just marv.

I closed my eyes, pointed to a spot on the page, and whaddya know, I landed on these Bacon-Roasted Pears. The recipe calls for stuffing the pears with Greek yogurt and goat cheese, and drizzling the thing with balsamic reduction. Delicious. Howeves, I figured eliminating the Greek yogurt and sticking to the goat cheese would make the thing that much richer, and I was feeling too lazy to reduce balsamic vinegar. SO omit the Greek yogurt, and drizzle these sonsofbeehives with honey I did. Marv! Just marv.

How do you do with lack of symmetry? 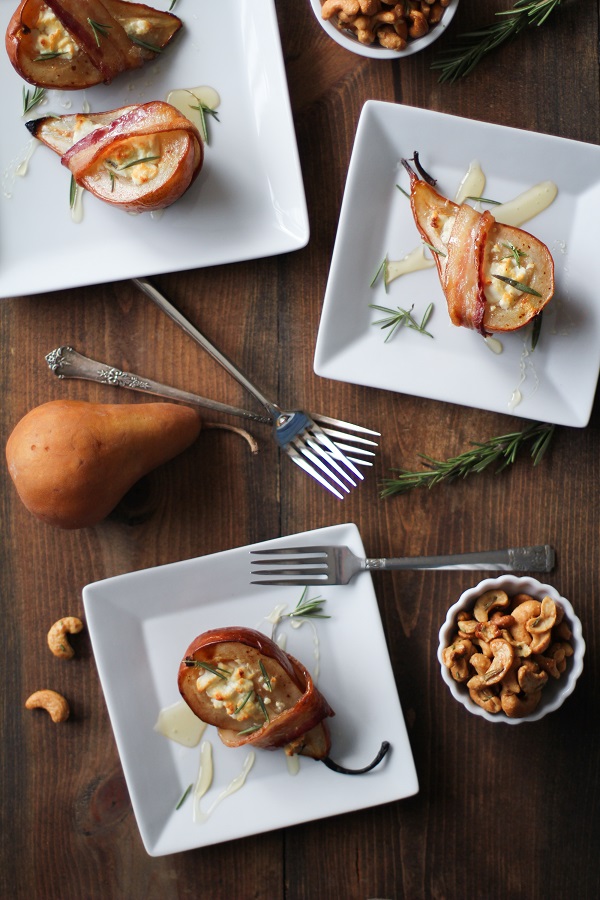 Can you even handle it? Are the crooked plates making your heart race?  Do you want to straighten those plates and make all them lines parallel? Oh hey, check out the Maple and Rosemary Toasted Cashews photo bombing the photog!

So what you’ve got to do with these is make them as an appy for your Thanksgiving hoorah next week!  They take about seven seconds to assemble and they can just hang out in your oven for 40 minutes, since it’s already going to be hot and everything. Spoiler alert: they perfume your home with bacon scent.

Before I let you take the recipe and run:

Have you entered my Fall Favorites Giveaway yet? If you haven’t yet, please feel free to do so.

And while you’re there, you MUST read the comments from the peeps who have already entered. As it turns out you’uns have received some puh-retty HILL-arious white elephant gifts in the past. Thanks for the laughs, friends! Now go get you a pear treat! 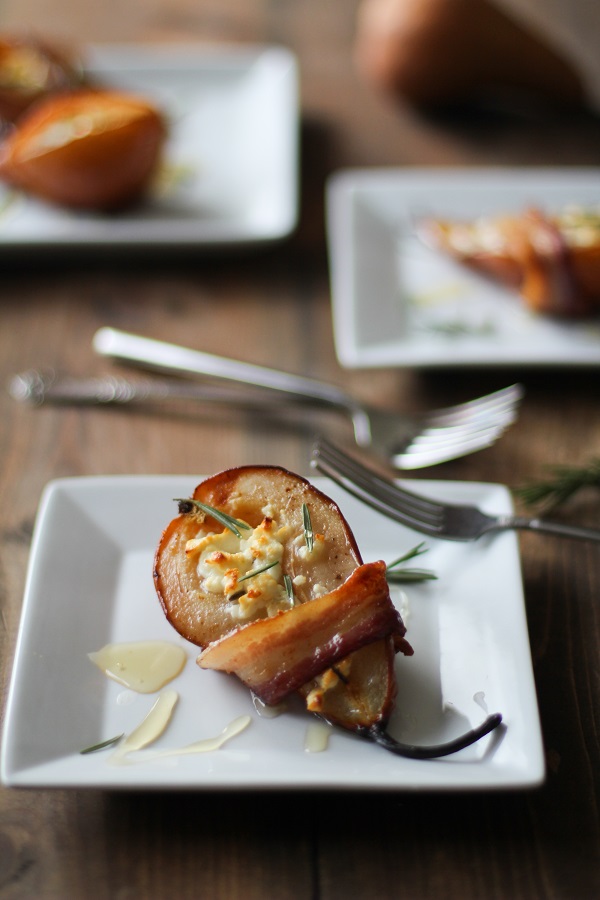 I'm going to make these tonight for an appetizer potluck. I'm supposed to pear it (see what I did there?) with a beverage. So tired of white wine. Got any suggestions for a cocktail to go with?

Ah jeez, I'm late in responding to this, but dang, I bet a pear cocktail would have been amazing!! Or like an apple cider dark and stormy type of situation? Also, perhaps my lemon thyme bourbon cocktails: https://www.theroastedroot.net/lemon-thyme-bourbon-cocktails-naturally-sweetened/ Hope you enjoyed the pears!

I'm majorly not into pears, as it turns out, but if anything could turn me and my wayward tastebuds around, it's goat cheese and honey. And a good roast.

I hear ya girl, pears are not high on my priority list, either. The goat cheese + honey is a major improvement, and I bet some vegan coconut bacon sprinkled on top would be excellent, too! xoxo

I've never paired bacon with pears before! I don't know why! These look wonderful.

OH EM Geepers! Get thee some bacon wrapped pears! It's a real game changer, to be sure!

These are gorgeous, Julia! You can make the plates are crooked as you want, as long as you keep delivering me food like this. I won't judge (OK, secretly I will judge you). :-)

LOL this is why I use round plates most of the time...I just can't get on board with symmetry, but I know I'm probably sending some of my readers into shock when I post unsymmetrical lines ;) Let's eat all the bacon-wrapped pears.

You are hilarious! I felt like you were doing a song and dance in my living room waxing poetic about these roasted pears with goat cheese and bacon. And now I want one for breakfast. And lunch. And dinner. And dessert.