Paleo vegan pancakes that are grain-free, dairy-free, and made with almond flour. This healthy gluten-free pancake recipe is made easily in your blender and results in fluffy, moist pancakes.

If you’ve been a long-time follower, it’s no mystery that my Almond Flour Pancakes have been one of my most popular recipes of all time.

Because many of you have an egg allergy or follow a vegan lifestyle, I thought it only appropriate to re-make my classic almond flour pancakes into a vegan version.

The swap for eggs couldn’t be any easier – I simply whip up two “flax eggs” using ground flax seed and water as a replacement.

Serve these beauties up with a dollop of vegan “butter” spread and pure maple syrup (or regular butter if you can do dairy), and dive into the fluffiest, moistest egg-free pancakes that ever did exist!

I have had a vegan version of my Soft, Chewy, and Gooey Paleo Chocolate Chip Cookies on my To Do list for over a year now! Those cookies are one of the most popular recipes on my site, but they do contain ghee and egg, making them not vegan-friendly.

Because so many of you are either sensitive to eggs, dairy, or both, OR prefer following a vegan diet, I thought it was high time I finally whip up a recipe to accommodate the need.

I admit, I thought it would be a challenge. I admit, the sequel, it was not. I simply replaced the ghee with equal-parts coconut oil and swapped the chicken egg for a flax “egg.” Badda bing, badda boom, the BEST vegan chocolate chip cookie was born! 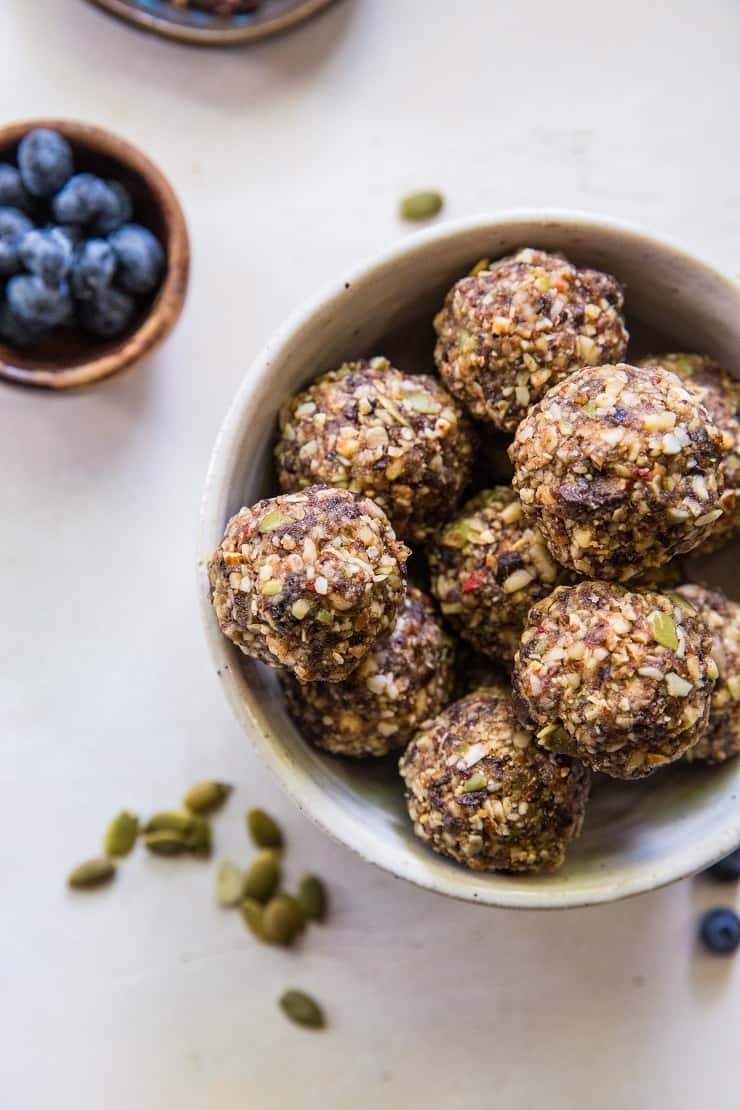 You may have noticed a theme with my snacks section of this site. Let’s face it – they’re mostly nut-based and they’re mostly balls. The  amount of snack recipes I share in comparison to main dishes is pretty dismal by virtue of the fact that I’m not a big snacker.

But when it comes to nuts, seeds, and dried fruit all balled up together in an energy bite? Sign me up.

When I head out of town for a long road trip or go for a long jaunt in the mountains, I’ll often snag some balls in case I have to go more than a few hours between meals. I don’t rely on store-bought snacks, as I find they contain too much sugar and/or contain ingredients I try to avoid.

For this rendition of energy balls, I used all superfood ingredients to generate a ball that is jam packed with healthy fat, antioxidants, minerals, and all sorts of health benefits. PLUS they taste like blueberry chocolatey goodness, which is a major win in my book. 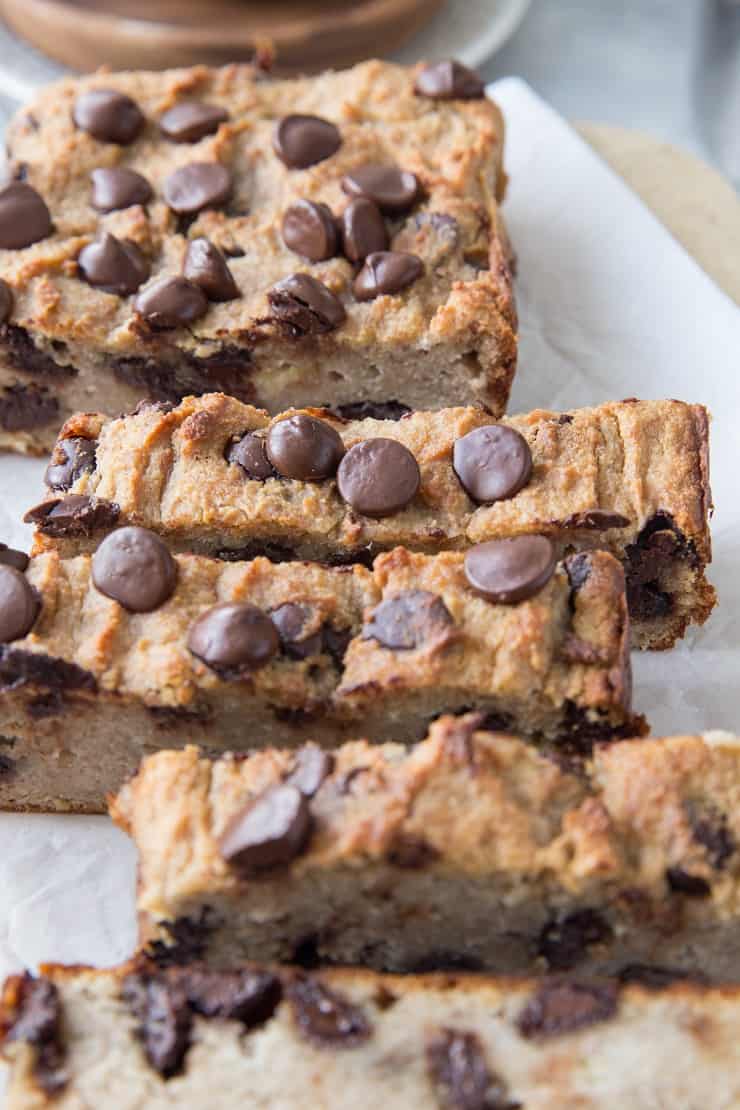 I can’t even tell you how many times I’ve made this Chocolate Chip Vegan Banana Bread in the last two months!

The first two times were to test the recipe, and the remaining several times? Pure gluttony.

One of the most popular recipes on my site is the Paleo Banana Bread I posted back in 2014. Talk about a recipe I’ve made eleventy billion times! In so many renditions, flavors, and colors. If you want to take a gander at all the versions, simply deep dive into my Paleo Banana Bread archives.

Paleo Vegan Fudge Brownies that are gluten-free, sweetened with coconut sugar, and made egg-less with a flax seed egg replacer. This simple recipe is made quick and easy in your blender and also includes a Keto option. 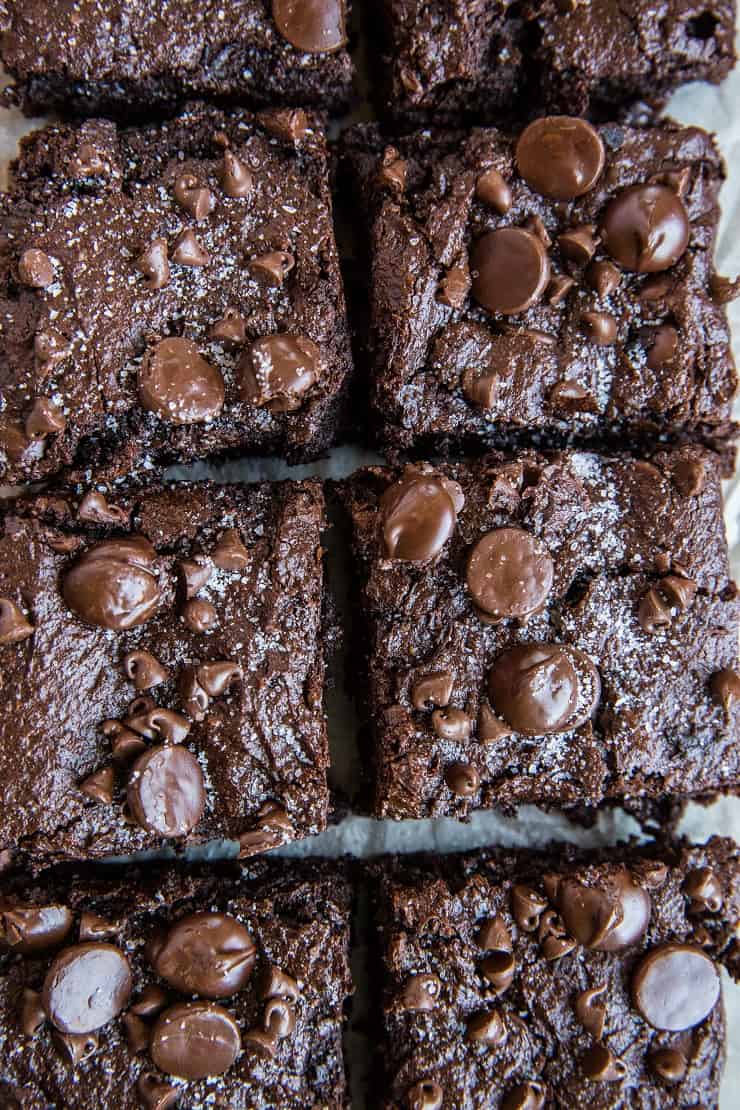 When I try to describe these paleo vegan fudge brownies intelligibly, I’m almost at a loss for words.

These vegan brownies are rich, decadent, chewy on the inside with the perfect thin layer of crisp on the outside, and taste like a browniegasm is exploding in your face.

Overnight n’oatmeal breakfast porridge made with nuts and seeds for a grain-free, protein packed way to fuel your day. This recipe requires only a handful of ingredients and a few minutes to prepare!

Grain-free, paleo carrot cake made with almond flour and sweetened with pure maple syrup. Top it with cashew-based vegan cream cheese frosting for a healthier take on the classic dessert.   By my calculations, there are two types of cake: carrot cake, and all the other cakes. This is not to say I’m not partial …

Lookit these lumps. I’ve been on the prowl for THE perfect gluten-free chocolate chip cookie recipe for many moons, and I daresay, I have found it! But this isn’t it. Just kidding, it totally is. IMO, there’s absolutely nothing that compares to a fresh-out-of-the-oven chocolate chip cookie. BUT, because I don’t eat the glutens, my life …

Vegan Gluten Free Banana Pancakes are fluffy, moist and flavorful – a healthy and delicious way to start the day.   Supriiiise! Pancakes! I know, I know. Me posting a pancake recipe is about as surprising as Friday…happening…every week. And let’s call a spade a spade: this is the third stack of banana pancakes I’ve …