Grain-free, paleo carrot cake made with almond flour and sweetened with pure maple syrup. Top it with cashew-based vegan cream cheese frosting for a healthier take on the classic dessert. 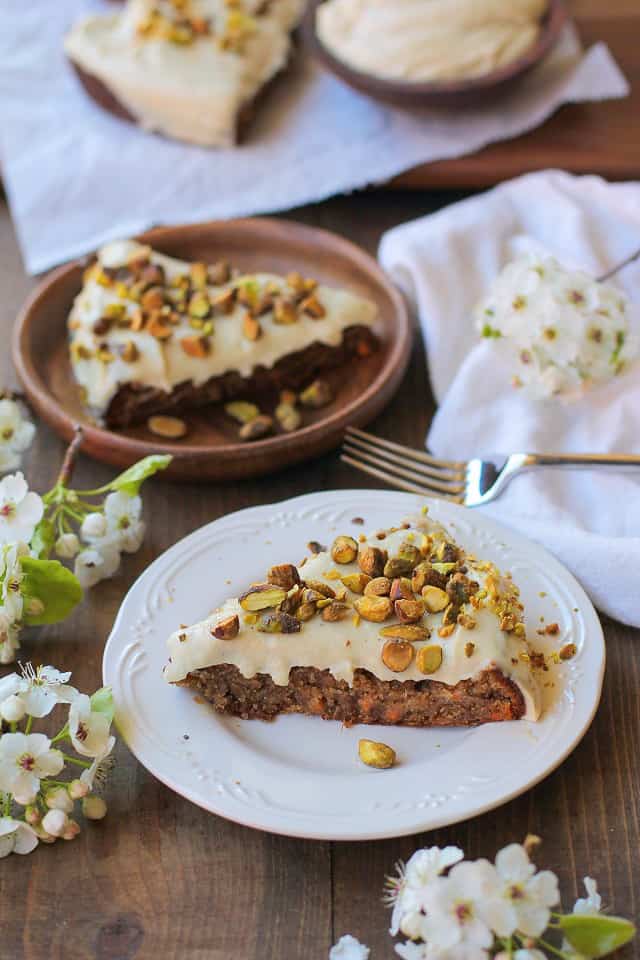 By my calculations, there are two types of cake: carrot cake, and all the other cakes.

This is not to say I’m not partial to all the other cakes…I totally dig them.

But carrot cake? It’s an entirely different species of baked good in my mind.

It is, in a word, the dopest of all the cakes.

For this reason, I rarely bake carrot cake without close supervision.

For when I do so un-chaperoned, I eat half the cake in one standing (because the feeding is too aggressive to complete while peacefully seated).

Anyone know what 1-½ cups of almond flour + ¼ cup of pure maple syrup feels like in your stomach organ? Bliss. Heavy, heavy bliss. 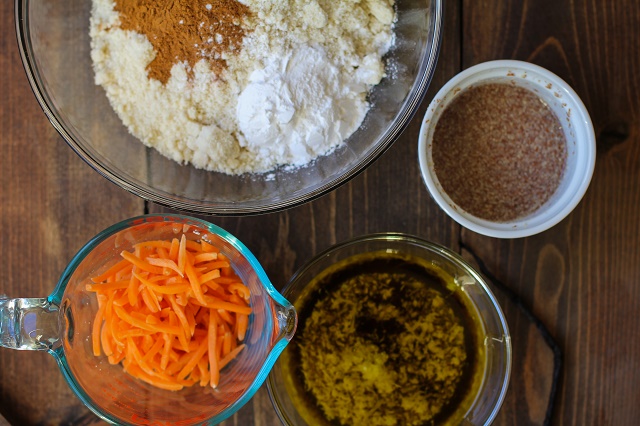 It turns out dense, somewhat similar to a cookie bar (yet softer than a cookie bar). In essence, the texture is difficult to describe, but the flavor is on point with regular carrot cake.

I’ve been paying close attention to all the healthy carrot cake recipes out there, and I’ve observed a couple of things:

1.) When grain-free and paleo, the recipe usually includes eggs (which is totally fine for non-vegan folks such as myself), and

I haven’t come across a recipe that is grain-free, vegan, naturally sweetened, and paleo. Which is how this cake was born.

There’s so much going on with this cake, I’m going to break the whole thing down. 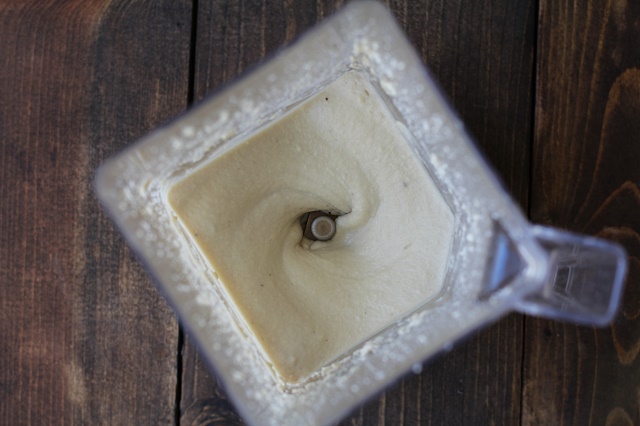 Get it? Because it’s made with nuts? I know, it’s a riot.

To ramp up the health benefits of the recipe, a cashew-based “cream cheese” frosting sweetened with pure maple syrup keeps it ultra clean.

Do note, some paleo people object to cashews, so if you have allergies or are following a strict diet, you can omit the frosting or use a whipped coconut milk topping instead. 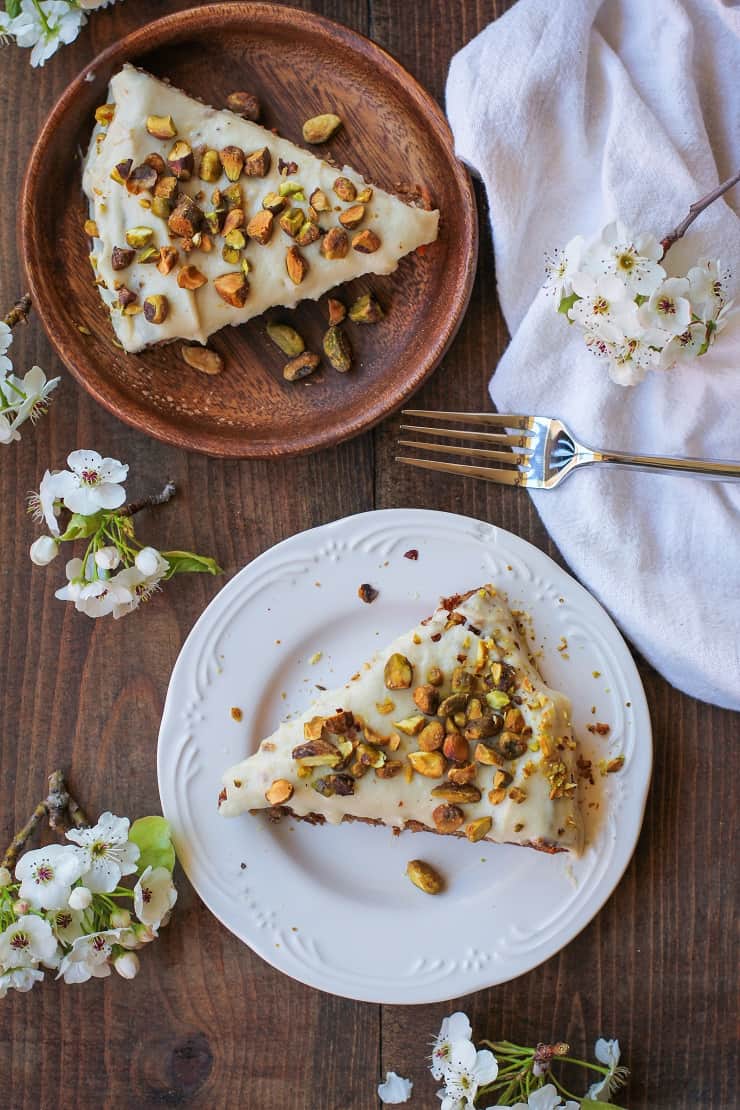 Also try my Paleo Strawberry Crumble, Paleo Cranberry Orange Vegan Scones, or my Paleo Apple Pie Bars, all of which are both grain-free and vegan!

*Use almond oil, coconut oil, or grapeseed oil in place of avocado oil

If using a smaller cake pan, you'll need to bake the cake longer until it is set up. Try baking it at 350 degrees F for 45 to 60 minutes, or until the cake tests clean. 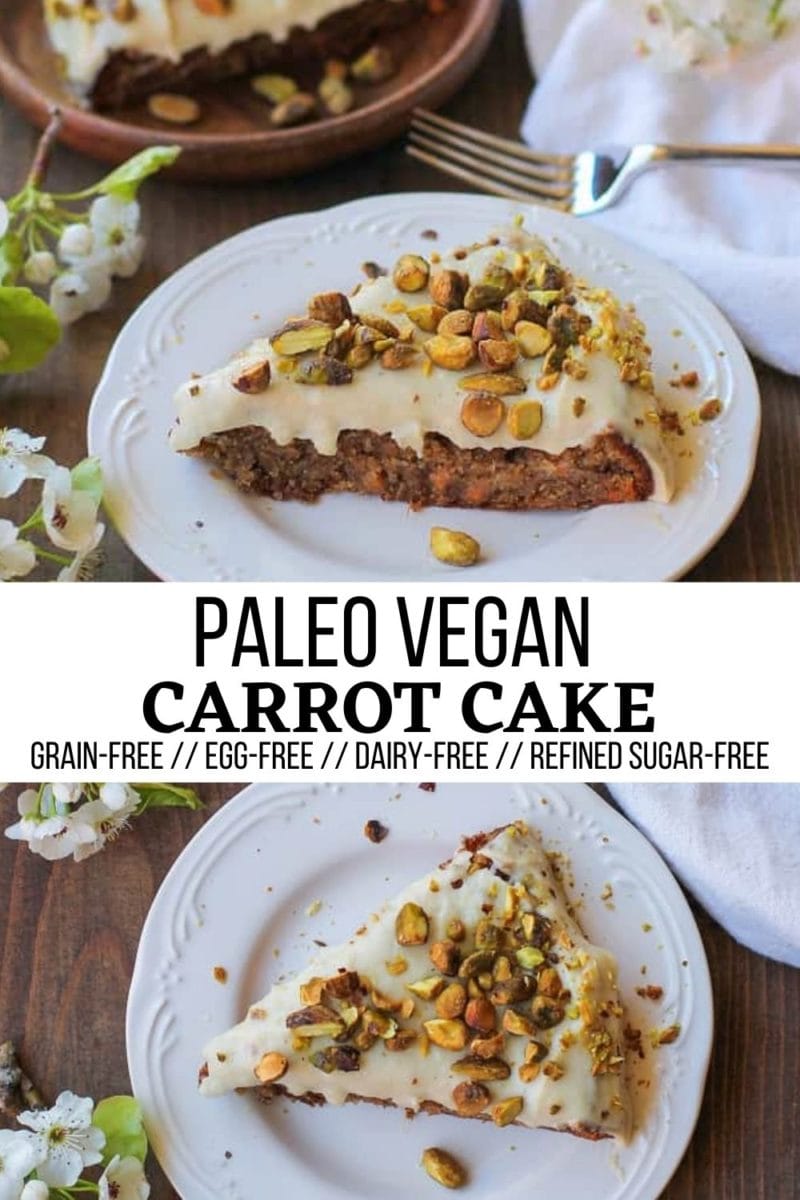 All I can say is WOW! My friend is grain free and I'm vegan and I made this for her and was so shocked at how good it was! I added yellow raisins, nuts and coconut but stuck to the rest of the recipe. I will definitely make this again! It held together beautifully!

Great success! I'm so thrilled to hear you and your friend enjoyed the cake! Love the addition of yellow raisins, nuts and coconut! Sounds magnificent! Thanks so much for swinging back around to let me know! xo

Thank you thank you!! This amazing recipe helped make our Christmas so magical. As I added all the spices and the abundant amount of fresh ginger and carrots I thought, “the kids probably won’t touch this, but hopefully my husband and I enjoy it.“ Well, my kids devoured it! We all did! I’m just amazed at this recipe. I love the abundance of the spices and fresh ingredients and how it comes together to make for a true culinary experience. It’s a joy to make! I remember despising carrot cake in the past because it was so dry and had a strange spicy flavor, but not this one. It’s perfection. We served it with dairy free whipped cream. Muah! I’m making it again tonight and my kids jumped for joy! :)

I'm so thrilled to hear you and your family enjoy the cake, Jenn! Thanks so much for the thoughtful note and the sweet words. I love the recipe as well - it's just one of those feel-good treats! Much love to you and your family! :D xoxoxo

This carrot cake is delicious! I have made it several times. One time I added about 3/4 cup of unsweetened coconut and it was delicious. My favorite additions are raisins and nuts - so good! However, I do not top it with frosting, but I may do that during the holidays.

That's so great to hear, Brenda! I find the cake to be so inviting without frosting too, so I'm thrilled you're enjoying it. Thanks so much for the sweet note! xoxo

I've been vegan for more than 16 years and let me tell you, this is the best cake ever. For me there are two types of cake: chocolate cake and carrot/pumpkin cake. I am notoriously bad at baking and when I am feeling adventurous enough to try a new recipe I mostly fail. I've never eaten a cake with no grains but this one looked delicious, so I wanted to give it a try (without putting in jeopardy my cashews, therefore no frosting). I made some variations to lower the calories and increasing the proteins... and it turned out brilliantly! I love its flavour and texture. I can't thank you enough for this recipe!

This is such an encouraging and sweet comment, Anna, thank you! I'm so happy you like the cake and were able to make some changes to make it better fit your nutrient profile :) Many thanks for the lovely comment! Hope you're staying well! xoxo

Any substitute for the tapioca?

Hi Jennifer! You can do arrowroot, potato flour, or more almond flour. xo