Cream cheese stuffed peppers with caramelized onions and herbs. This crazy tasty appetizer recipe requires only a few ingredients and only about 16 minutes of bake time! Whip these beauties up for your Super Bowl party this weekend. 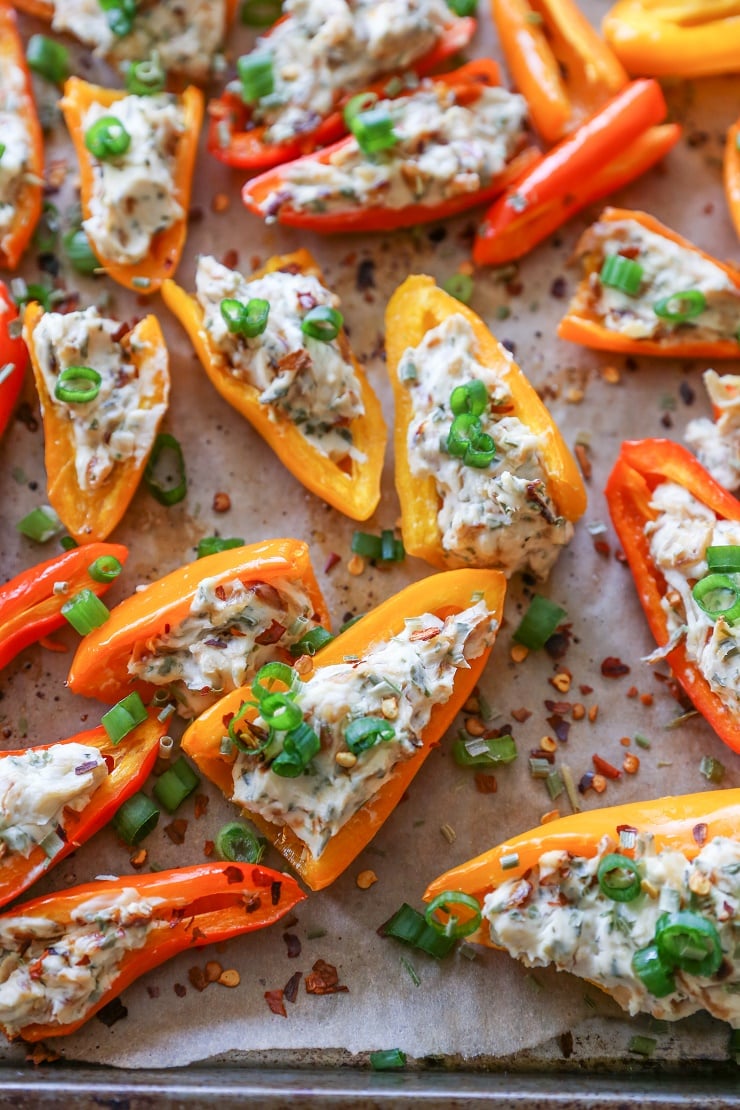 Those of you who are looking for a speedy quick, easy, tempting, gooey, sultry Super Bowl appetizer recipe, you have come to the right place!

Fun fact: The recipe I posted almost five years ago for Cream Cheese Stuffed Baby Bell Peppers is still one of the most popular recipes on my site, in spite of the fact that the photo is off-the-wall silly, not at all Pinterest-friendly, and was taken with a point-and-shoot camera…

For the life of me, I couldn’t figure out why the recipe has been doing so well for so long..

..until I made these cream cheese stuffed peppers again.

..and then I was like, “Oh. Yeah. That’s why. Because they’re nuggets of bliss.”

Who could blame you for loving the recipe?

Because the Super Bowl is this weekend (is it awful that I don’t even know which teams are competing?), I figured there would be no better time to share an updated version of the recipe, because, you guys, you’ll never need another appetizer recipe ever again.

For reals, these stuffed sweet peppers fill any/all appetizer needs/requirements. Except, you might want to consider wrapping them in bacon. Fair suggestion.

As I was saying… 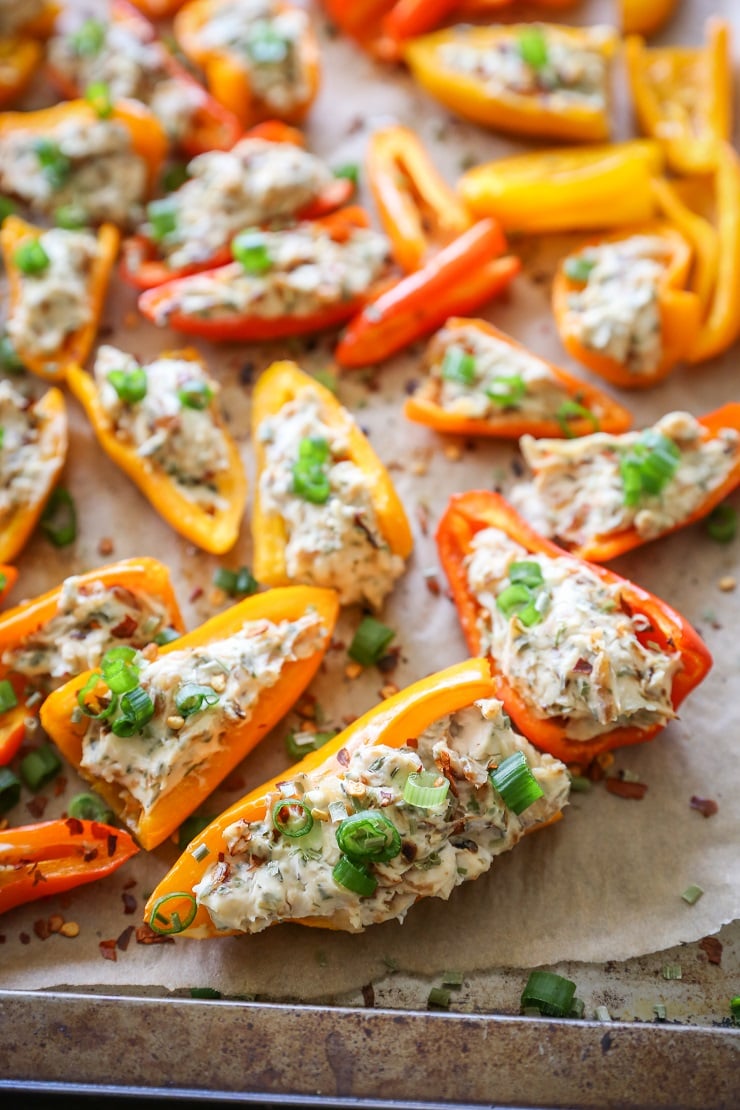 This time around for the stuffing mixture, I decided to caramelize up an onion and mix it in with the cream cheese, along with some dried herbs. So.bloomin.simple..

The only labor-intensive part of this recipe is halving the sweet peppers and seeding them, but you can do this up to 1 day ahead of time.

The onion can easily be caramelized while you’re multi-tasking, and the cream cheese stuffing mixture can also be prepared ahead of time so that when it comes down to stuffing and baking, the prep time is miniscule. We’re talking a total of 16 to 20 minutes in the oven. Make ‘em in bulk! 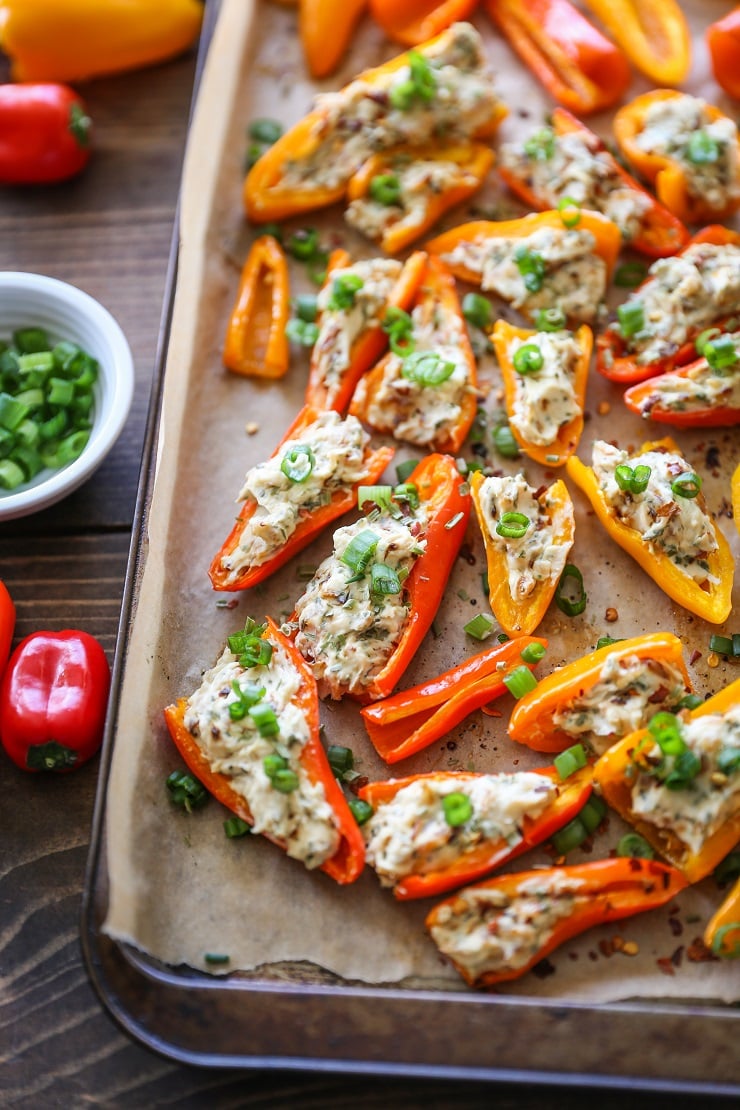 Also check out my Air Fryer Cream Cheese Stuffed Mini Peppers for an air fryer version of this recipe.

These sound great! Do you have any nutritional information for these? There is a block for this, but it is basically empty. Thanks.

Hi there! I just updated the Nutrition Facts! Hope you enjoy! xo

Don't forget some bacon on top too

Caramelizing onions does take a substantial amount of time. If you're in a hurry, you can cut the saute time down to 20 minutes or so, but the flavor will not be as deep and the texture will not be as soft. Hope you enjoy the stuffed peppers! xo

these look so good - I could eat a tray of them - love that they can be made vegan:)

hoooray for updated recipes. I love those! and perfect timing indeed. I feel like I should try with the vegan cheese. Yes!