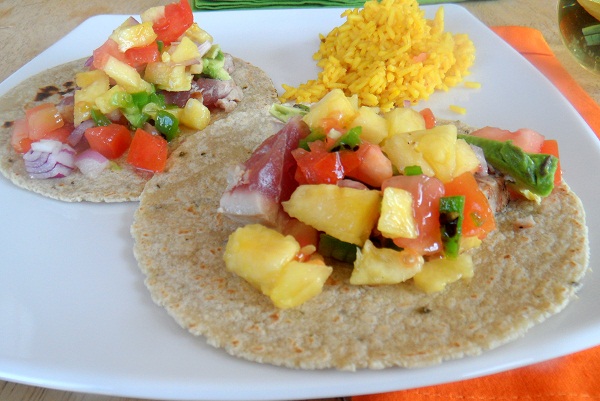 During a fit of desperation for fresh fish last week, Sandi (who I have just been jibber jabbering about nonstop on my blog this week) and I got a little lost on the way to all-you-can-eat sushi. Correction, I got us lost. Only for a moment. And during the moment of lostedness, we drove by a local seafood company by pure accident. While we were indeed en route to a feast of a dinner, we determined we would re-visit the seafood shop on a different evening for some fresh fish to make at home.

And re-visit, we did!  This seafood place had all sorts of fish neither of us had heard of as well as a great deal of sushi-grade options.  When we chose a pound and a half of fresh ahi tuna, a butcher emerged from the back of the building as though he was coming out of an Alexandre Dumas novel, holding only the most beautiful cut of fish I have ever seen in person.  “Is this alright?” he asked in his Alexandre Dumas novel accent. “Mmmmuhuh” we responded, full to the brim of I’m-going-to-eat-the-crap-out-of-that awe.

These tacos were made with hearts full of love, beer in hand and the caution of a five-year-old petting a zebra (does that even make sense? Sure it does…). I will admit, these tacos are not for everyone as not everyone is a fan of undercooked fish. But for those of you who dabble in the sushi, I just know you will love these simple tacos, which make you feel like you’re tanning on a beach in Hawaii with an umbrella cocktail oh so close to your chaise lounge.  Be sure to get a very fresh, sushi-grade cut of tuna and put on your searing shoes!

For an updated version of this recipe, check out my Seared Ahi Tacos with Mango Avocado Salsa

For the Pineapple Salsa

For the Seared Tuna

Remove the outside of the pineapple, cut it in half lengthwise, then cut each half lengthwise again. Carefully remove the core on each strip of pineapple.  Chop half of the pineapple into small bits for the salsa and save the rest of it for a yummy snack.  Using tongs, roast the jalapeño over an open flame (use your gas) until the flesh begins to char and flay off.  Remove the flayed skin, seeds and stem. Finely chop the jalapeño.  In a serving bowl, place the pineapple chunks, chopped jalapeño, diced tomato and chopped onion. Drizzle the apple cider vinegar and squeeze the lime over the ingredients.  Mix together well and add just a dash of salt.  This salsa can be made ahead of time and tastes better the longer all of the ingredients marinate.

How to Sear Ahi Tuna:

Lightly sprinkle salt and pepper over the Ahi tuna steak.  A good quality cut of tuna will melt in your mouth and doesn’t require extra seasoning.  Heat about three tablespoons of olive oil in cast iron skillet (if you don’t have one, no biggy, just use a regular skillet) to medium high. Really make sure the skillet is hot before placing the fish on it by flicking water on it…if it sizzles and pops, it’s probably ready.

Place the tuna steak on the skillet and sear on one side about 3 – 4 minutes before flipping it over and searing the other side for 3 – 4 minutes.

You just want the edges cooked about ¼” into the fish so that the middle is still very raw.  Once you have a good sear, remove the fish, place it on a cutting surface, and cut slices for your tacos.

To compile the tacos:

Heat your favorite tortillas (I just put mine on the grill of my gas range for about 30 seconds each side). Add desired amount of ahi slices, avocado slices and pineapple salsa. Serve with saffron rice and you’ve got yourself a glorious meal!

Current haps: making my favorite comfort food of a

If you’re standing back watching the pumpkin dra