Savory quinoa breakfast bowls with sauteed bell peppers, onion, and kale, topped with a runny egg and avocado – a well-rounded superfood paleo breakfast to keep you energized and on track throughout the day.

This post is sponsored by Thrive® Culinary Algae Oil. 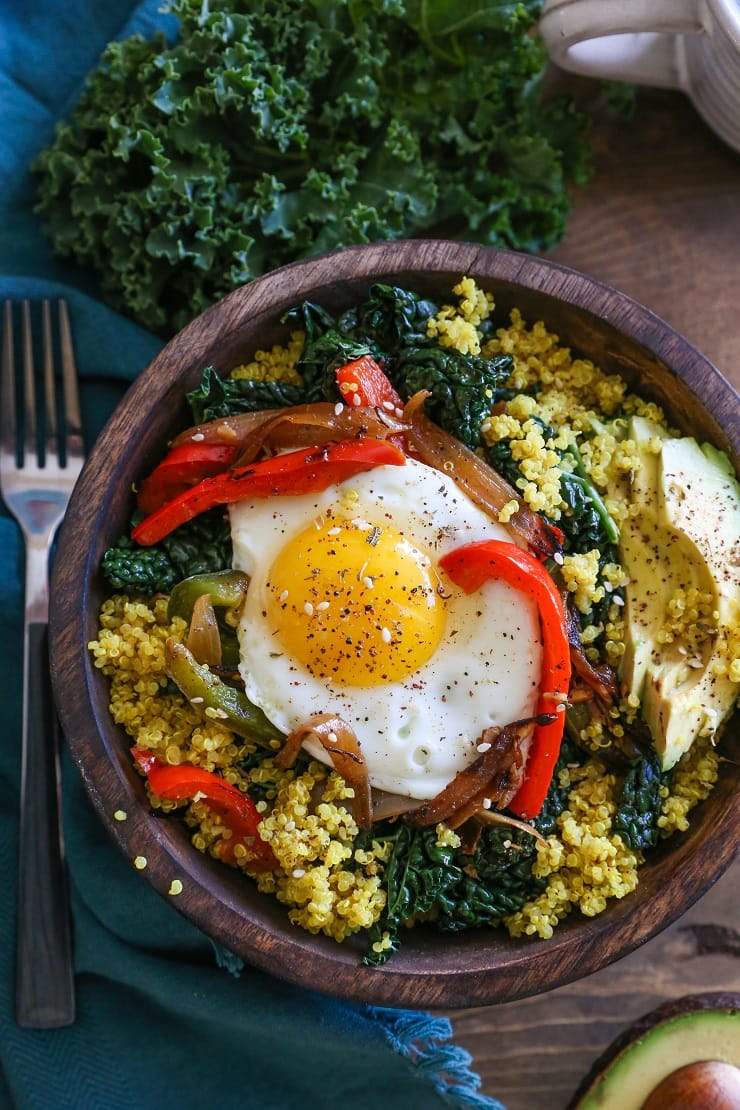 In the five years I’ve been blogging, I’ve watched various products and types of foods go in and out of fashion (goodbye cookie butter, red velvet everything, and cake pops; hello chia seeds, turmeric, and matcha) including the subset of oil. Within the health and nutrition world, the jury on oil has been pretty convoluted within the last few years.

When I first began blogging, the country was just drizzling a little olive oil on it, much like the father from My Big Fat Greek Wedding was spraying everything with Windex. The olive oil craze moved to grapeseed oil, moved to coconut oil, and now the health community is saying, “ixnay on the oilay!” altogether, as high amounts of saturated fat have been linked with colon cancer and heart disease. As is true with most topics in our country, we’re very much all or nothing people, then we kick ourselves later for going to such extremes.

The upside to the madness is we’re paying more attention to our food intake than ever before, and we’re cognizant of the effect said food has on our bodies. When it comes to oil, everyone has their immediate go-tos…either for health reasons, convenience, or affordability. I, for one, go in the direction of health regardless of price tag or level of convenience. Which brings me to the topic of this blog post: algae oil. 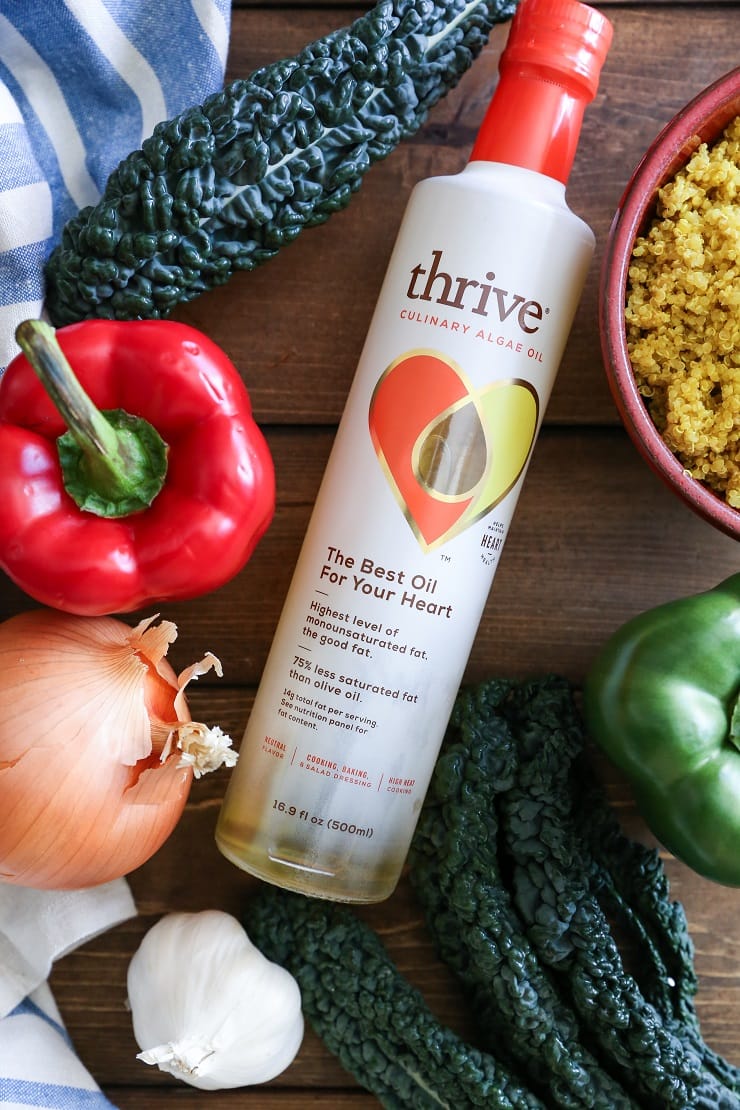 Have you heard of it? Lettuce have a discussion!

Thrive® Algae Oil comes from one of the world’s most sustainable food sources: algae. It has a higher smoke point (485 degrees Fahrenheit) compared to other oils, which means it is great for frying, searing, and roasting at high temperatures as well as cooking at low or no heat.

What does Thrive® Algae Oil taste like, you ask? It has a very light, neutral taste. It’s very subtle, which I love because it doesn’t overpower the ingredients, allowing the true flavors of the food to shine through. Plus, the oil is super versatile. You can use it for cooking, frying, baking, sauces, and dressings. 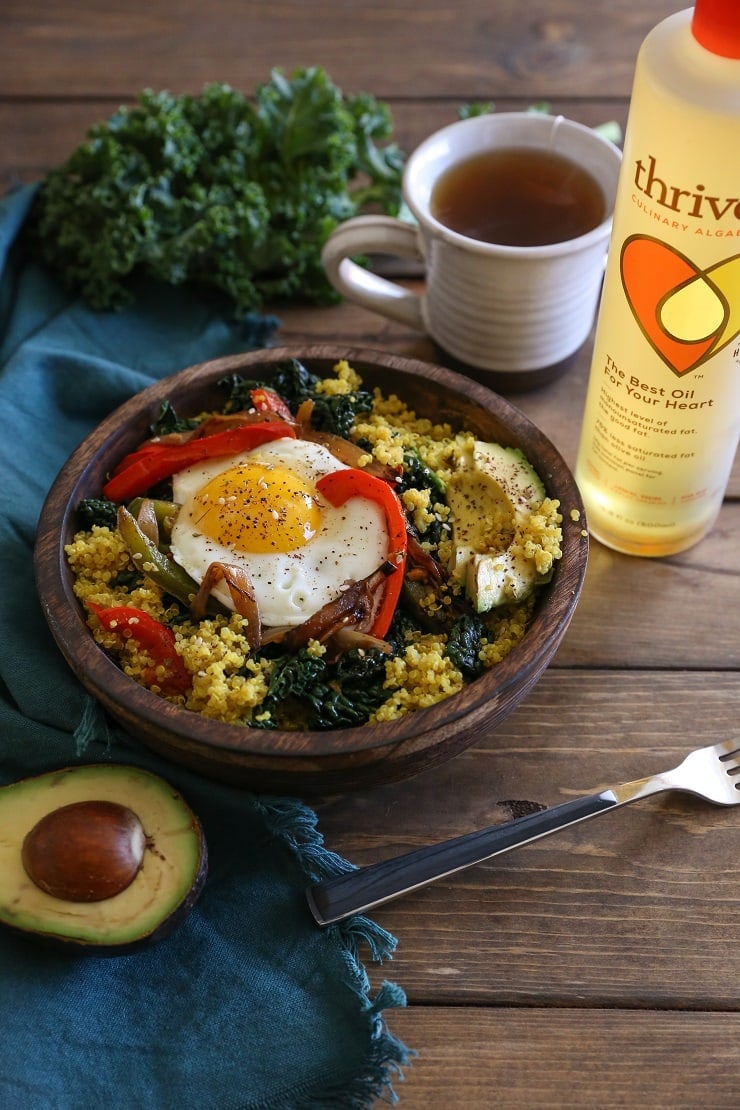 Let’s talk quinoa. I added some ground turmeric and fresh ginger to the pot while the quinoa was steaming to infuse some health benefits and flavor into the mix. One of my secrets to achieving the ultimate fluffy quinoa is adding oil during the cooking process. So in this case, I added some Thrive® Algae Oil to ensure the quinoa turned out nice and tender with tasty flavor. Once it was finished cooking, I added some nutritional yeast to boost the flavor – if you don’t have any on-hand, no big deal..the quinoa will still be great without it. You can always add cheese if you don’t eat a vegan diet.

Side note #1: turn this into a savory breakfast porridge by cooking the quinoa in 3 cups of vegetable broth versus 2 and/or drizzling warm coconut milk over the quinoa just before serving.

Side note #2: if quinoa doesn’t sit pretty with your digestive system, you can make this recipe using your favorite type of rice (or grain like barley or farro if you aren’t gluten-intolerant).

Topping this quinoa is a sauteed onion, pepper, and kale situation with a sunny side up egg (or poached or fried) for protein, and some avocado for yum. All things combined awards you a well-rounded breakfast that will keep you satisfied for days…okay, hours. 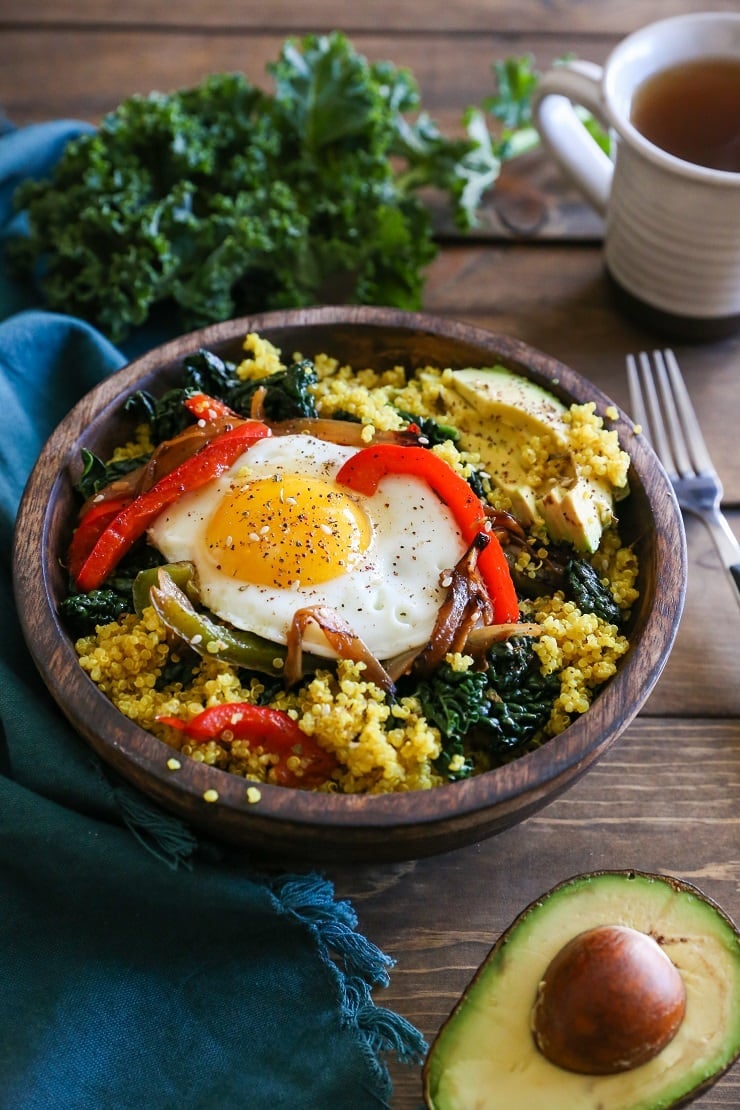 Make this a low FODMAP meal by omitting the onion 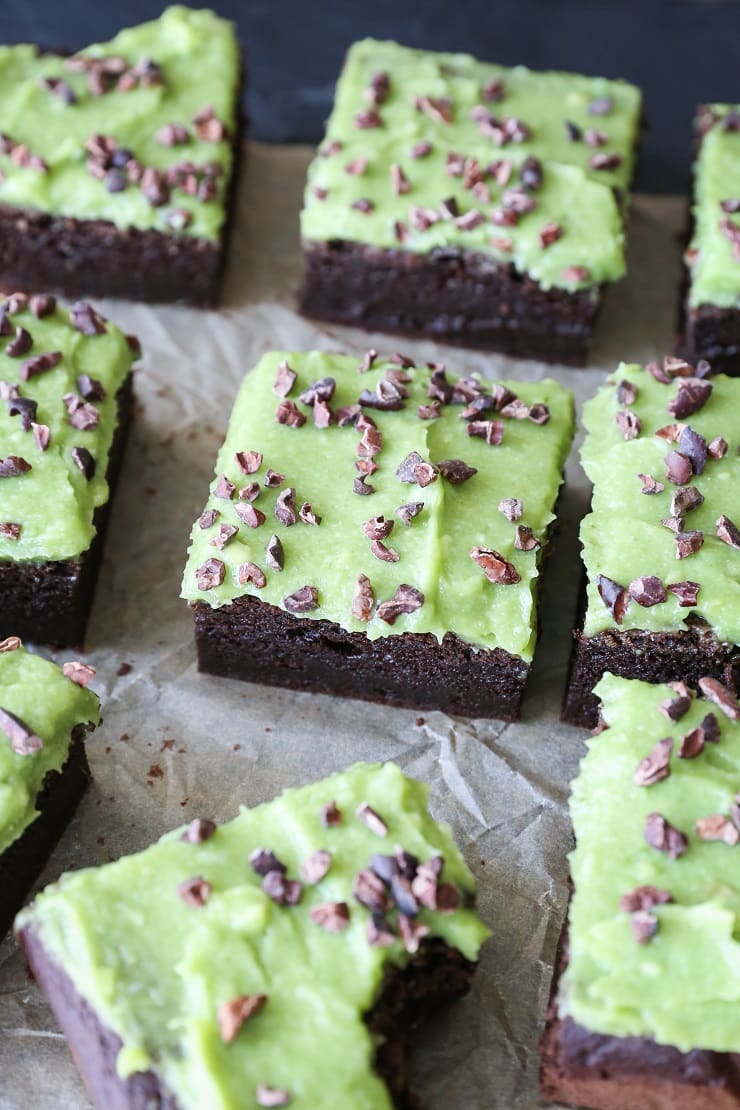 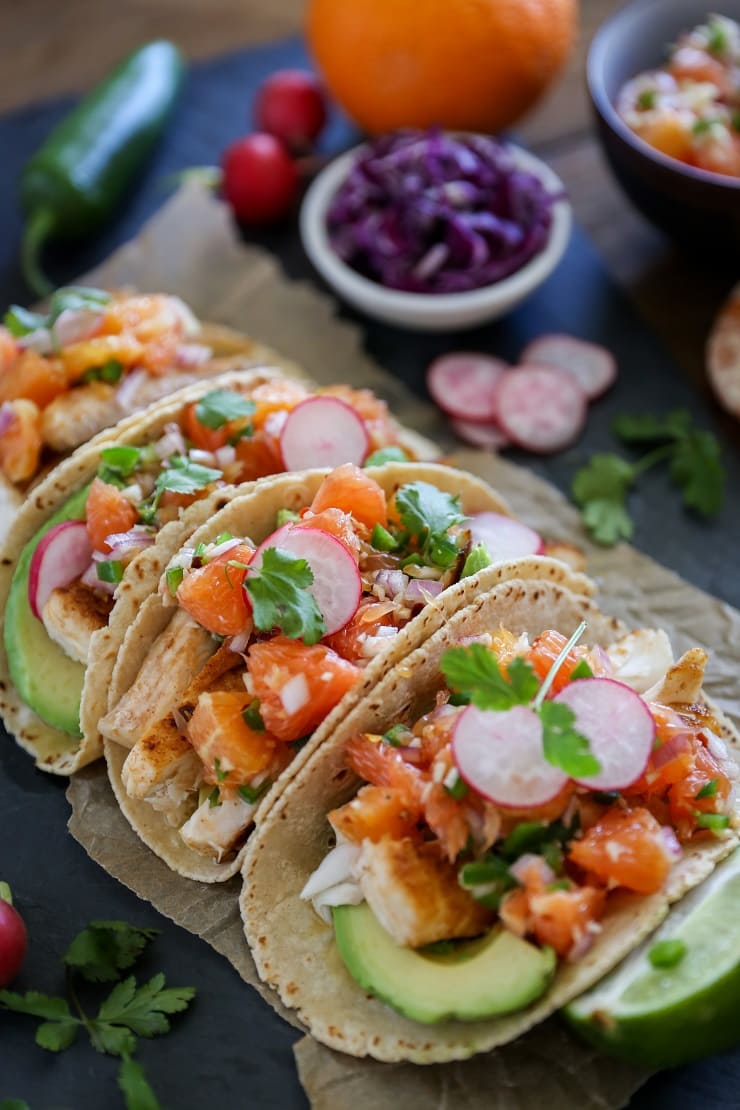 Well, controversy notwithstanding I shall be an olive oil-believer until the day I die...probably because my grandparents lived into their late 90s living on Italian food alone! However, I am definitely open to adding new oils to my repertoire. I have honestly never seen algae oil out there in the world but now I'm definitely going to be looking for it!

I get so overwhelmed with food trends too. I think as long as we are avoiding processed foods and eating plenty of plants then all is right in the world.

But I also think there is something to be said for saturated fat and heart disease. The SAD includes meat at virtually every meal, some cheese, processed foods with oil and barely any fiber. It's a heart attack waiting to happen! With that in mind, I appreciate that Thrive offers an alternative for those who are already sick and trying to get better or are genetically predisposed to heart disease. I also love that it has a high smoke point and am really impressed with the neutral flavor too.

These bowls look incredible! I love that you included so many veggies and turmeric spiced quinoa. Yes please!!

Seriously - the rate at which trends come and go is crazy!! haha But anyway, I am loving the sound of these bowls! I've yet to use algae oil but I am super intrigued!

I'll pay more for quality, healthy ingredients -- you can't put a price on that where I'm concerned. And I love Thrive! I've been using it since late last year and am hooked on that light neutral flavor. These breakfast bowls are packed with ingredients to start the day of right, and I'd gladly eat them for any meal of the day!

I'm in the same boat - I definitely believe you are what you eat, so mindfully consuming quality ingredients is a wise choice. I'm so glad you're a fellow Thrive lover and that you like the bowls! We've been enjoying them for dinner as well ;)