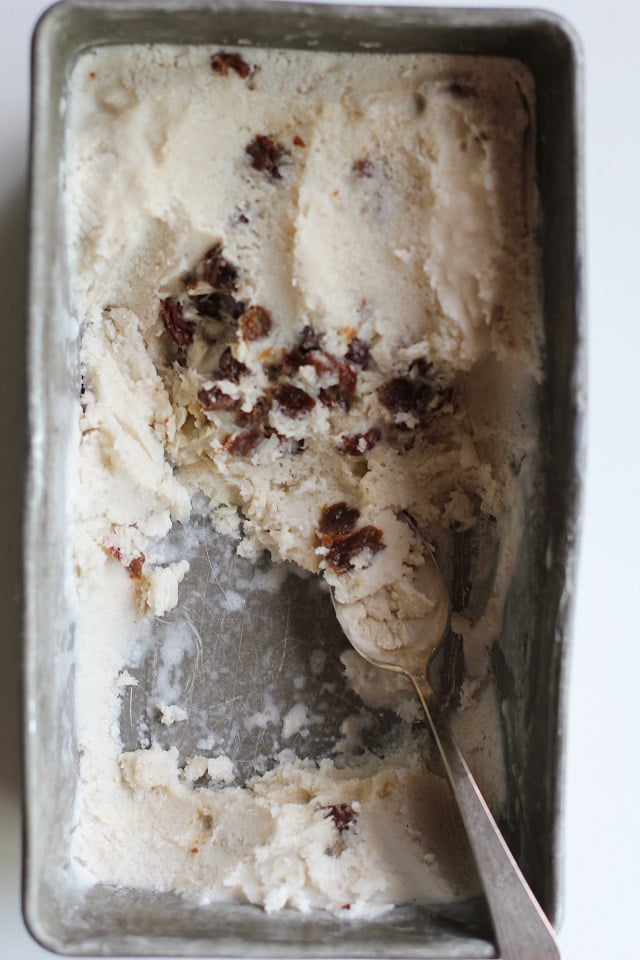 Trying different fancy pints of ice cream was like a sport for my mom and I when I was a teen. We even got a little competitive about it, trying to determine who could pick the best pint. We always had our favorite go-tos in between sampling new flavors. Dulce de Leche Haagen-Dazs was my love affair for all of Junior year, followed by Pistachio, then New York Super Fudge Chunk from Ben & Jerry’s for a hot minute. 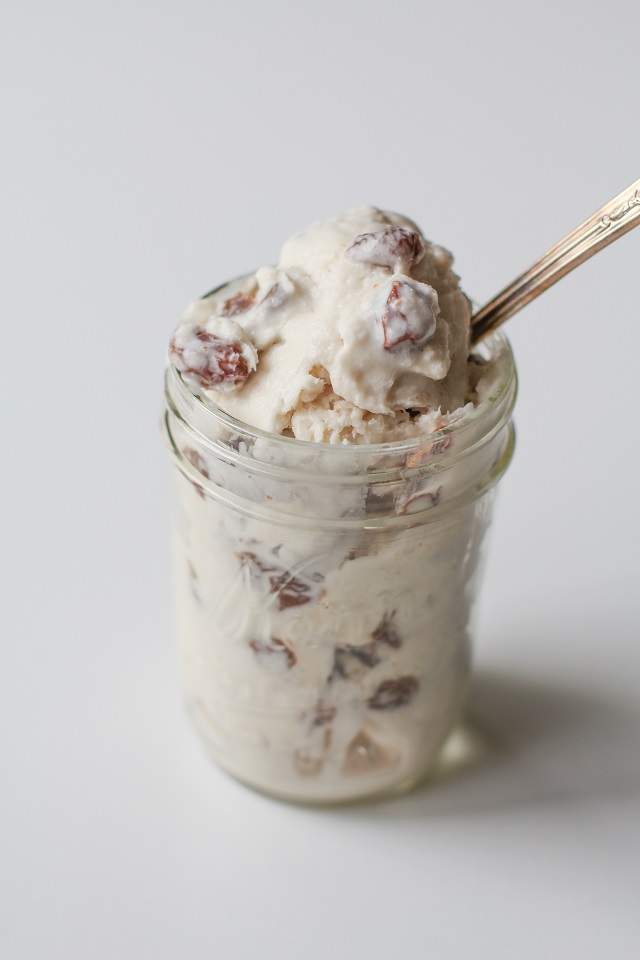 At the time, I couldn’t believe anyone would choose an ice cream with raisins of all things over a cookie or brownie chunked treat with swirls galore. I poo poo-ed the rum raisin selection for the longest time, convinced it wasn’t even worth a sample.

In her humble reassuring way, my mom always responded, “Just try it! You’ll like it.” Eventually, I put on my big girl panties, dug into the rum raisin, and she was absolutely correct. It was, in a word, amazeballz. 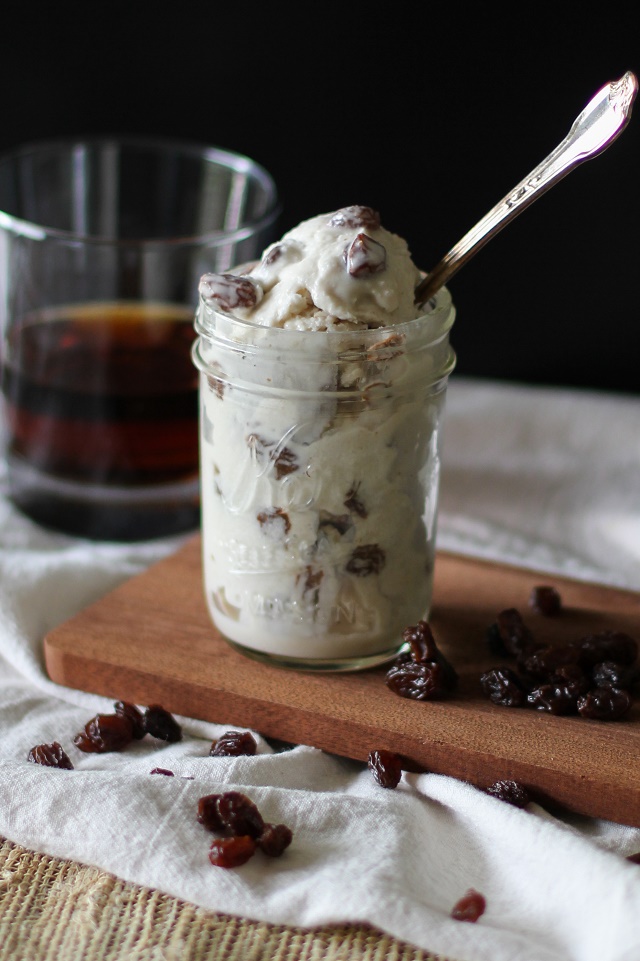 Now that I have an ice cream maker, I’ve been using my former store-bought favorites as inspiration. While this rum raisin ice cream recipe tastes so very similar to its store-bought counterpart, it’s actually lightened up quite a bit. Made with canned coconut milk and pure maple syrup, this recipe is vegan, sugar-free, and I like to think of it as healthy, but don’t quote me on that. Winky face.

Adding legit booze to ice cream helps it stay nice and soft, and this recipe’s certainly not lacking in that department (both in the creaminess and in the booze).  I plumped up the raisins by soaking them in boiling water for about 5 minutes before adding them to the ice cream base, which made them stay soft when frozen and added a TON of sweetness to the treat. To this day, I’m not a ginormouss fan of raisins, but for some reason, the soft and flavorful raisins in this ice cream are like little nuggets of booze-soaked joy for me.

Just lookit all them raisins!: 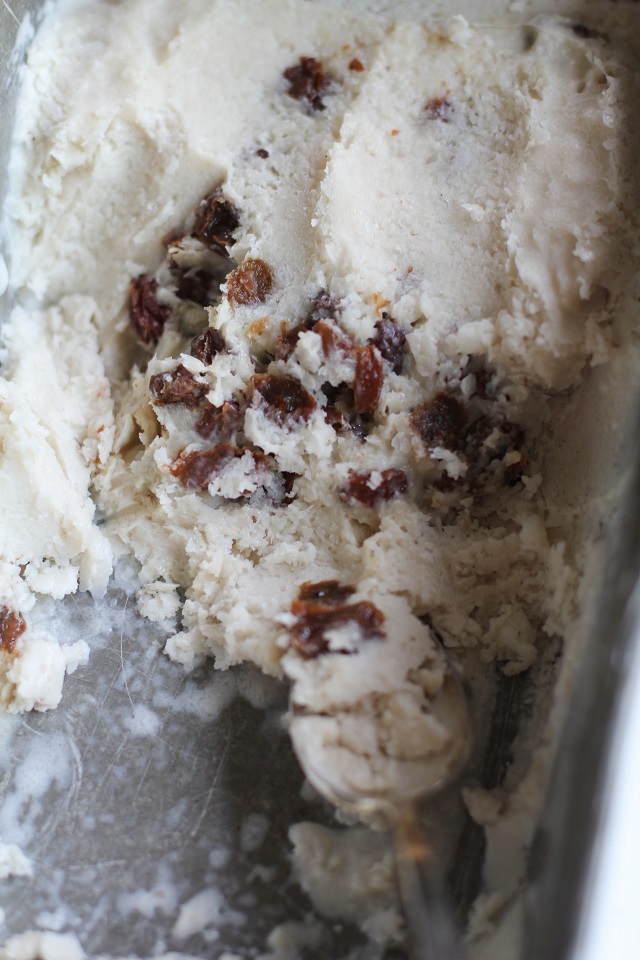 Rum raisin: check! Next up: Chunky Monkey. Kidding, not kidding.

Get yo cream on!

Check out my other ice cream recipes:

Really nice non-dairy recipe. I substituted salted buttered pecans for the raisins - seemed to match the slightly salty flavor profile better. Chilled the mix over an ice bath before processing in machine. Only used 2 T. Kraken rum in the mix, added near the end.

Um, yes please! Ice cream testing has to be the best damn sport on the face of the Earth. I just mixed up some custard this morning. The worst part is waiting--so hard! Love this flavor.

I would've poo pooed the raisins too, but I trust your better judgement!

I am typically not a fan of raisins either, but you are convincing me in the error of my ways. Though if anything could make them more delicious, it's a rum ice cream combo!

Such a yummy, underrated flavor!!