Have you ever had a piece of meat that was so good you wished your whole life was made out of it?

This is not an example of that.

Just kidding, it totally is.

Since it’s meeeeeat season and all, I’ve been craving pounds of big, juicy, tender slabs of bone-in meat, and these massive pork pops definitely do the trick. This is hands down one of my favorite hunk o’ meat recipes, and I could probably eat it every week without tiring of it. The flavors in this skillet gel so hard, they’ll give you one of those warm feelings in the pit of your loins that make you want to curl up like a roly poly and.just.hybernate. for days.

I was inspired by Cooking Light‘s Baked Pork and Apples recipe and went ahead and created my own rendition of the pork and apple pairing.

The way this thing works is you sear the pork chops in bacon drippings (being as it is bacon season, and all) and then roast them in the oven with legit apple cider (because: cider season) and rosemary (when is it not rosemary season?). While the pork is cooking, you roast yourself a bulbous bulb of garlic and make a little spiced apple topping magic on the stove top. Bangity boom: date food with a side of yum season.

Preparing this meal ignites your shnoz receptors and fills your home with layer upon layer of smelly good. Free business advice: bottle up the scent of this meal and sell it as a plug-in air freshener. That’s an idea you can bring to the Shark Tank, you’uns. Yeeeerwelcome.

Because the flavor meld is so pitch perfect in this dish, I recommend following the recipe to the T without any substitutions (unless you’re subbing the apples for pears and the bacon for more bacon, in which case, let loose). I used unsweetened Spiced Cider for roasting the pork in the oven, and also stewed the apples in cider for some extra flavor.  I have also tried the recipe using chicken broth in place of the cider, and it still turned out deliciously, but the result didn’t compare to the apple cider version. Don’t skip the bacon, roasted garlic or rosemary…you’ll want these flavor blasted love lumps. Free taste bud advice: if you can get all of the aforementioned components on your fork in a single bite, you’re looking at an intergalactic foodgasm.

Do this flavor meld!

For the Pork Chops

*You can make as many pork chops as you would like by searing the pork in batches. Only two large chops will fit in a 10-inch cast iron skillet at a time, so if you make more than two pork chops, place them in a large casserole dish when you roast them, and add more apple cider. 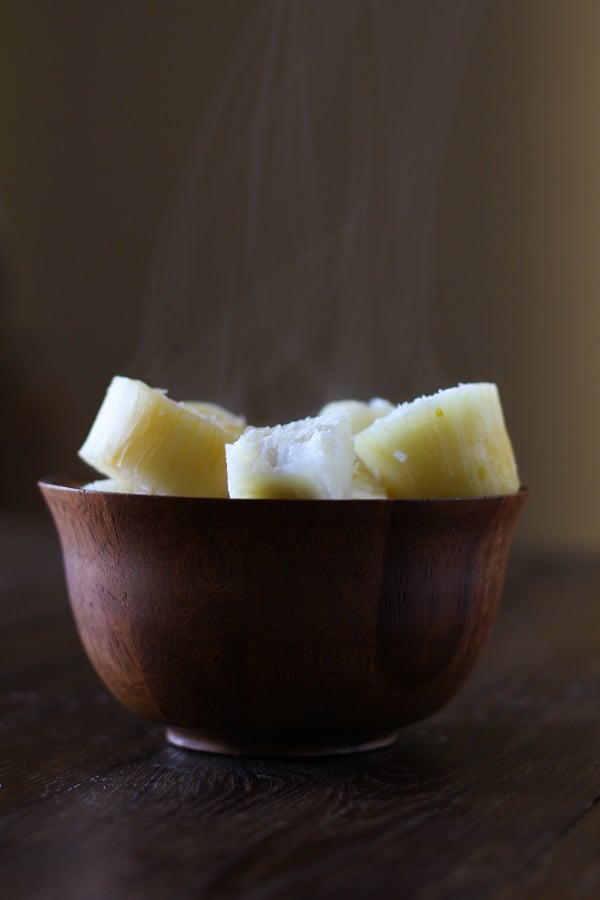 Previous
How to Cook Yuca Root

Julie made this Tuesday for my birthday dinner. Awesome doesn't describe it accurately!

Yaaaaaaaay! I'm so thrilled she made you the pork chops. They've seriously been my favorite source for meat lately. Thanks so much for letting you know you enjoyed them. AND haaaaaaappy belated birthday!!!! xoxo

This looks so delicious! I love pork chops, and love the addition of apples, I'm sure they are so flavorful!

Yes! I suppose if my whole life had to be made out of meat it would be bone-in roasted pork chops...or meatballs...it's a tie! Love this recipe!!

Meat cooked in Meat juice. I <3 everything about this.

Meat season? I'm pretty sure that's a year round thing. People love their meat! Believe me, I know.

But I'll be real, when it's prepared like this, how can you not? The flavors sound mind-blowing together!