Paleo Pumpkin Brownies made with almond flour and pure maple syrup. These healthy treats are sinfully delicious while still on the healthy end of the spectrum. I’ve included two recipes – one vegan version, and one with eggs. 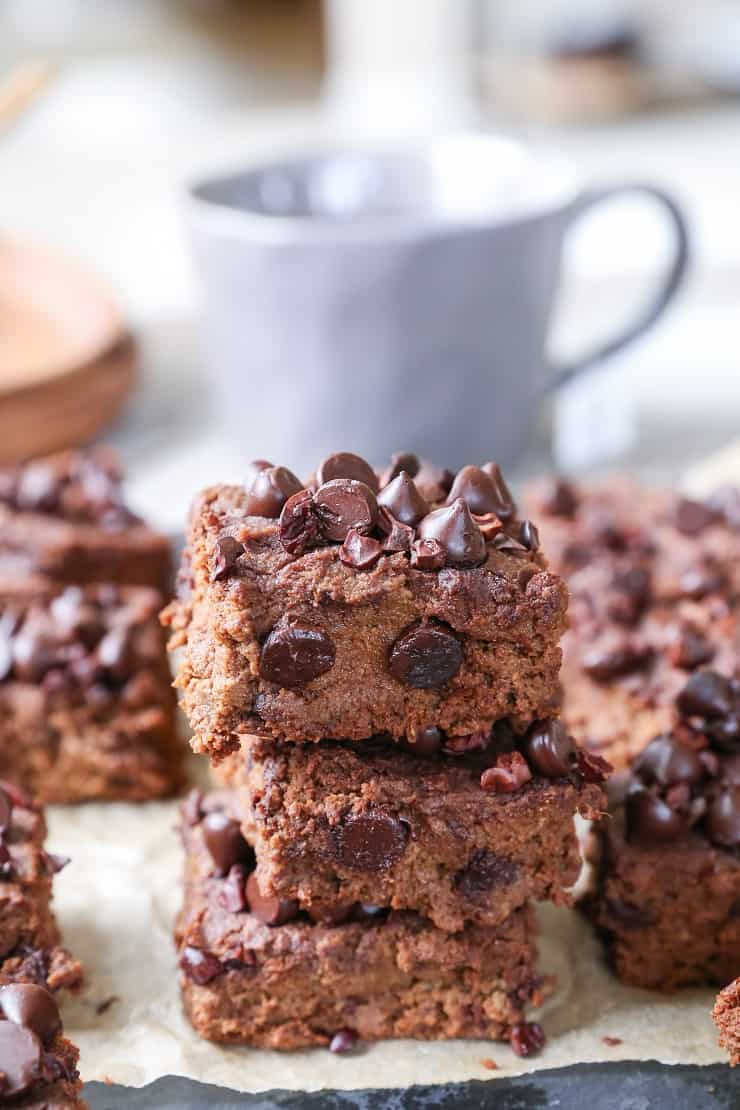 Oh hey, I made us veggie brownies!

Of the fudgey pumpkin varietal!

Both ways are grain-free and naturally sweetened.

One version is paleo, and the other’s paleo/vegan! Two ways to get your pumpkin, chocolate, and brownie fix. Better start preheating that oven right meow!

Sure, you don’t get that beautifully flaky top with that crispy edge and buttery splooge of molten glutenous bliss, but I’m amazed at how tasty these veggie brownies are! 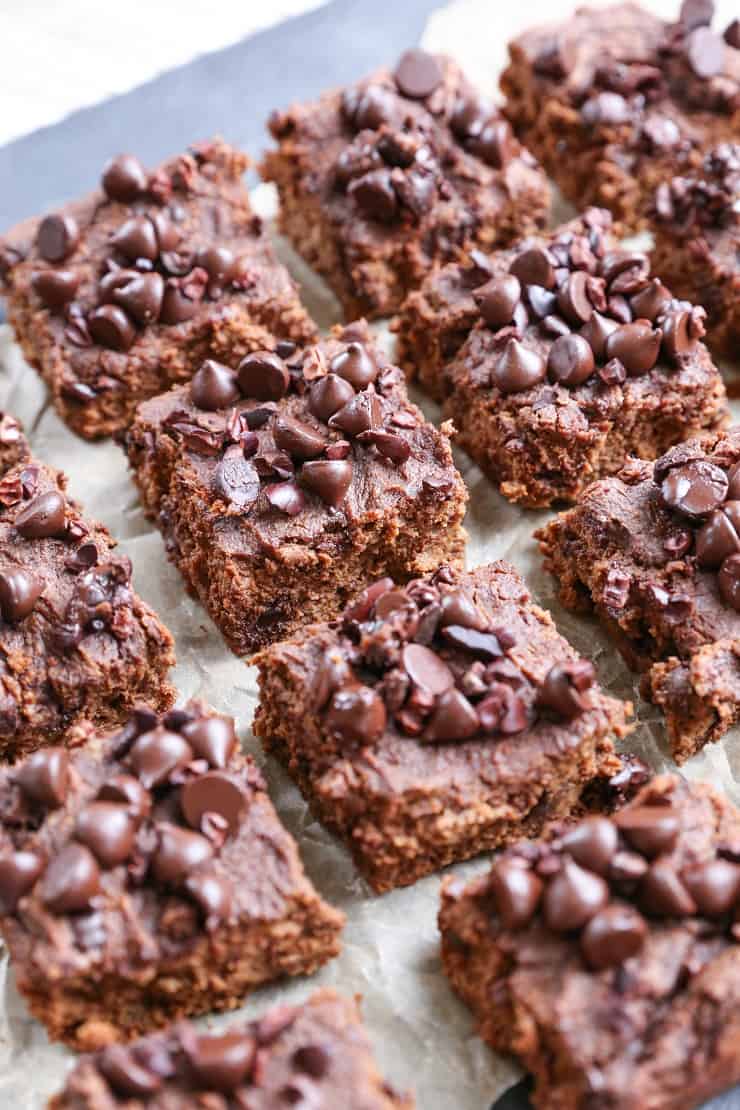 Okay, so the two different recipes here – one calls for eggs and the vegan version incorporates sunflower seed butter.

I see some major benefits to both versions.

The egg-inclusive version has a more pronounced pumpkin flavor and a more brownie-like texture, where the sunflower butter version packs a nice lil’ protein punch and turns out on the softer/fudgier end of the spectrum.

I can do some serious damage to these pumpkin brownies year-round, pumpkin naysayers be darned. I love that the main ingredient is a vegetable, because it makes me feel like I’m doing something useful for my body in addition to treating it.

The pumpkin flavor isn’t overpowering since we’re still going for that brownie vibe, so my guess is you can feed these to your friends and family and most of them won’t even be able to taste the pumpkin essence.

More likely they’ll ask you what’s going on with the je ne sais quoi of the dern thing. Have trouble getting your kids to eat their veggies? You’re welcome. 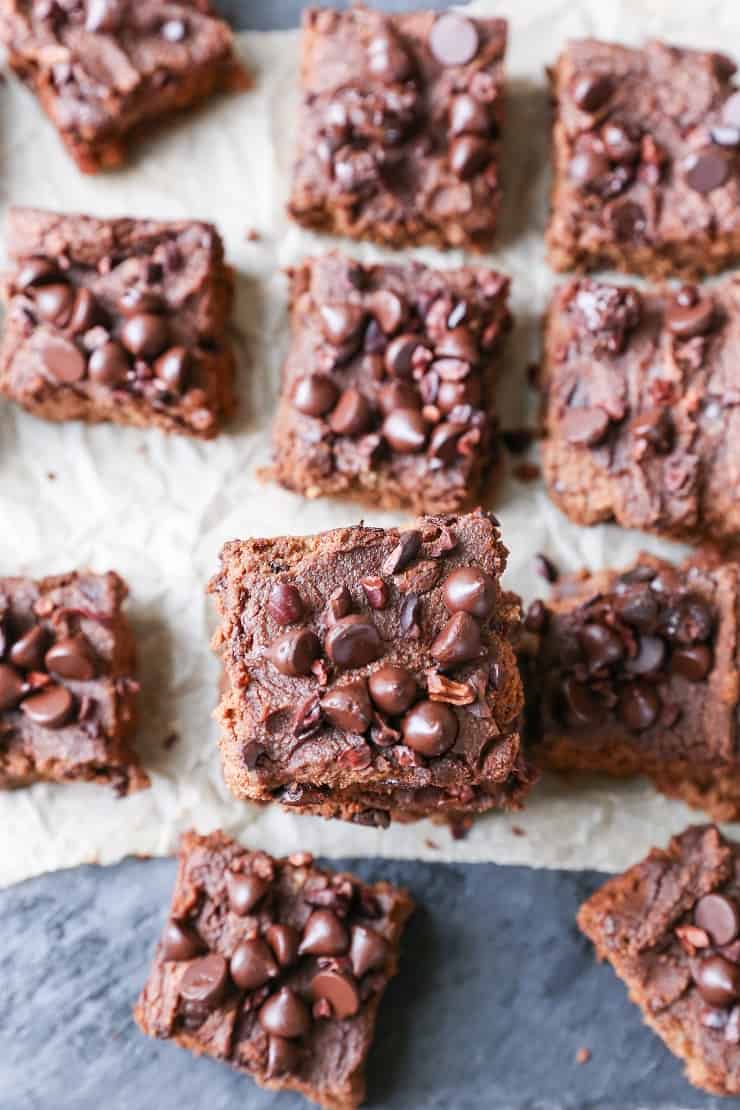 These brownies are on the softer/fudgier side, and they freeze really well!

Not gonna lie, I frozen both batches almost immediately after I made them to avoid the temptation to over eat them. I’ve been pulling them out and eating them frozen each day!

The recipe card below is for the paleo version. Read the notes for the vegan version! Enjoy!

For the vegan version:

1.) Omit the eggs, and add 1/2 cup of sunflower butter or cashew butter (you can use a different nut butter but will likely be able to taste it).

2.) Use 2 tablespoons of coconut oil instead of 5.

3.) Leave everything else the same. 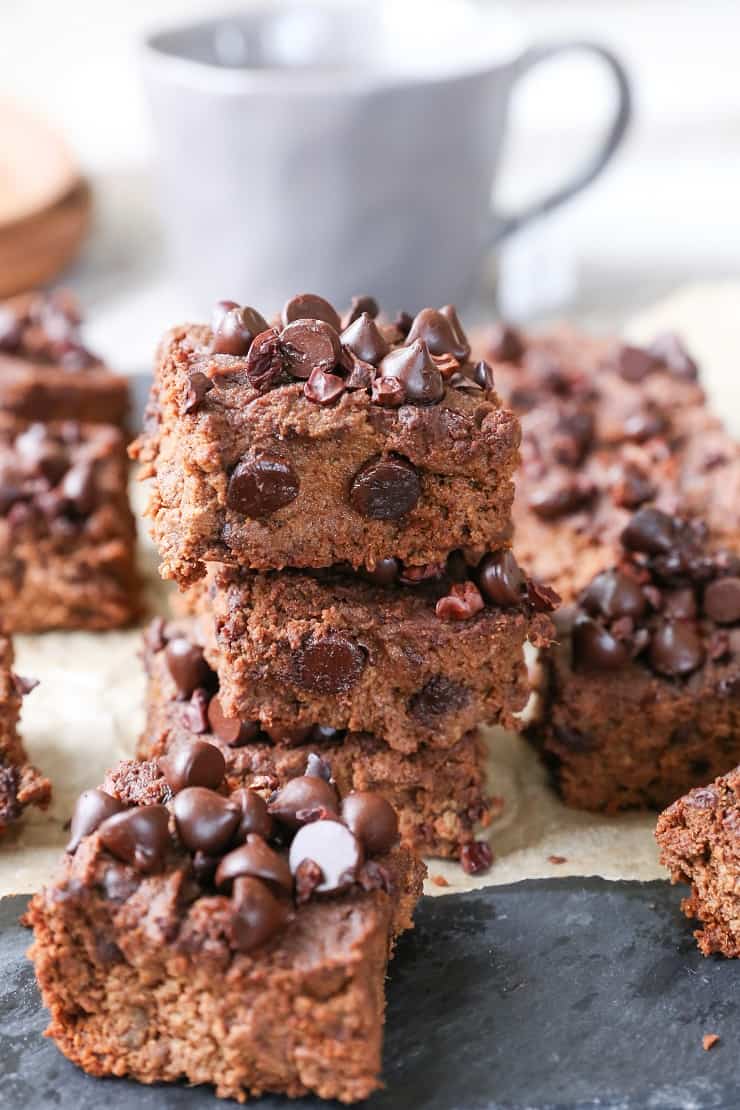 I made these last night, vegan style (w Sunbutter)! So GOOD! The letting them cool/ set/ sit is VERY important for taste! Thanks for all your great recipes! My gf/df IBD kiddo loved them! (I didn't tell him there was pumpkin in it, shh!)

I'm so happy you and your kiddo enjoy them!! So happy you were able to safely hide the pumpkin (hooraaaay!). Thank you for the sweet note! xoxoxo

I cannot do coconut,could I use Almond flour instead?

Hi Julie, coconut flour won't me a 1:1 swap, as it absorbs 4x more liquid than almond flour. I would need to create a new recipe to be sure what the exact measurements would be. In the meantime, let me know if you experiment with it, yourself! You can also follow this recipe for Pumpkin Squares and add chocolate chips and/or cocoa powder. If you add cocoa powder, just be sure to add some oil or coconut milk to offset the addition. Hope this helps! xo

I’m so excited to make this! Question— could I add pumpkin pie spice to this? How much for you recommend? Thanks :)

Tomorrow will be the third time in four days that I’ve made this! And I get request for the recipe every time. Thank you!

That's so great to hear! Thank you for letting me know, Jacqueline! xo