This post is sponsored by the American Pecan Council. 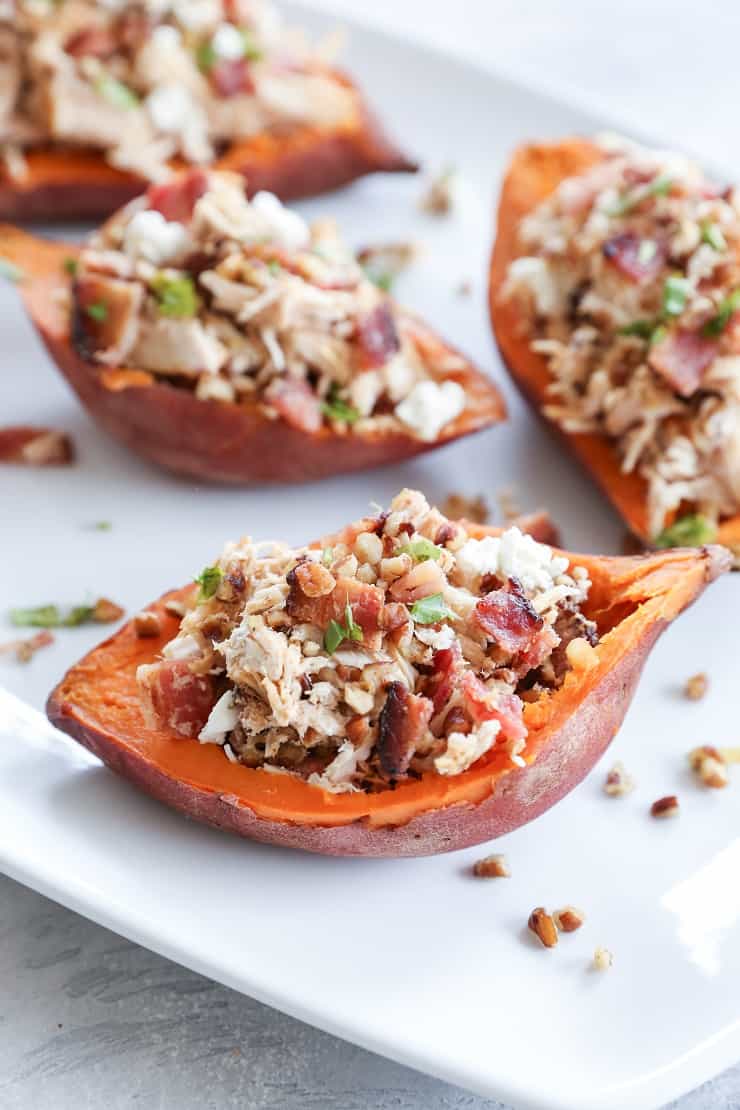 The way I see it, these tasty potato skins are perfect for serving at your Game Day party, or really any gathering! They’re just the right amount of filling to help tide your friends over on game day, and they’re also straight-forward to prepare.

In order to prepare the shredded chicken filling, we slow-cook a couple chicken breasts in the crock pot, shred them up, and mix the shreds with goat cheese, bacon, and pecans. The flavors and textures combined are out of this world! The goat cheese lends a nice creamy tang, where the bacon gives that meaty essence without making the potato skins overly heavy, and the pecans bring a marvelous nutty flavor and crunch to round out the whole experience. 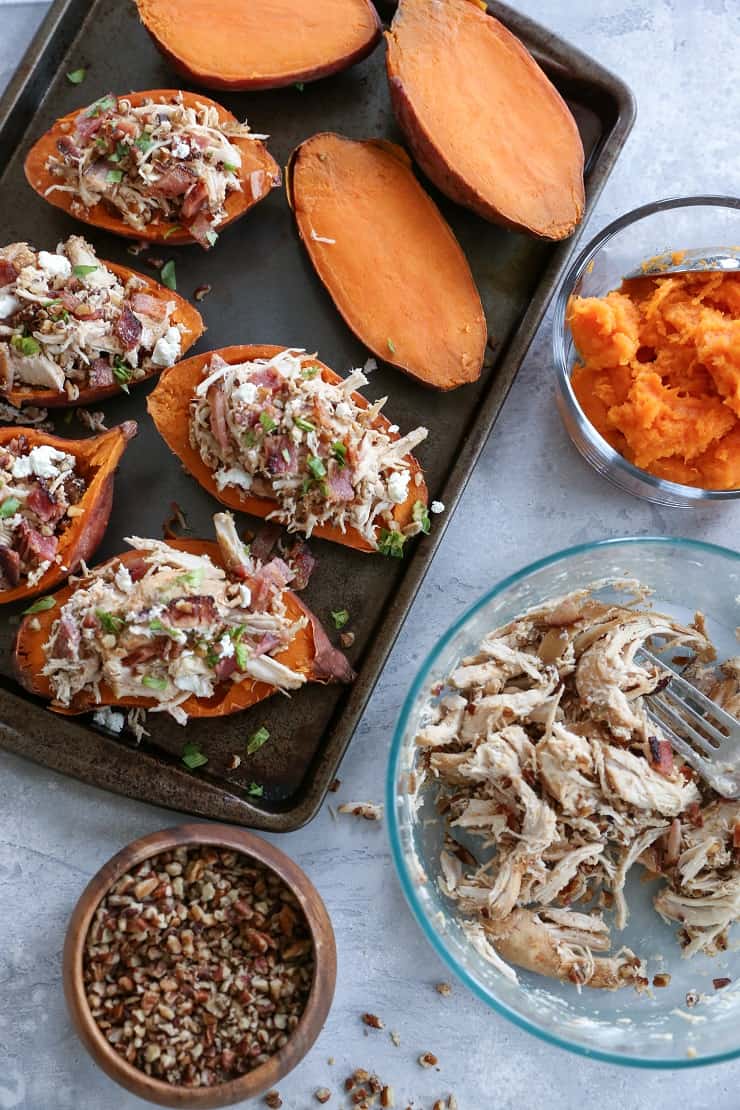 We discussed pecans briefly a few weeks ago in my Roasted Butternut Squash Kale Salad recipe, and now we’re back at it. Did you know pecans are the only tree nut indigenous to North America? In fact, we grow 80% of the world’s pecans right here in the U.S.

Pecans are quite the superfood, as they contain unsaturated fats, plant sterols, fiber and flavonoids, which when added together help promote a healthy heart. According to the U.S. Food and Drug Administration: Scientific evidence suggests but does not prove that eating 1.5 ounces per day of most nuts, such as pecans, as part of a diet low in saturated fat and cholesterol may reduce the risk of heart disease. One serving of pecans (28g) has 18g unsaturated fat and only 2g saturated fat.  It’s easy to make one serving happen daily since pecans are so versatile – they’re not only magnificent on their own (and in pie…duh 😉 ), but they can be added to so many dishes to bring flavor, texture, and nutrition  benefits to the table.

So now that we’re becoming well-versed in the magical world of pecans, we can circle back to these sweet potato skins. 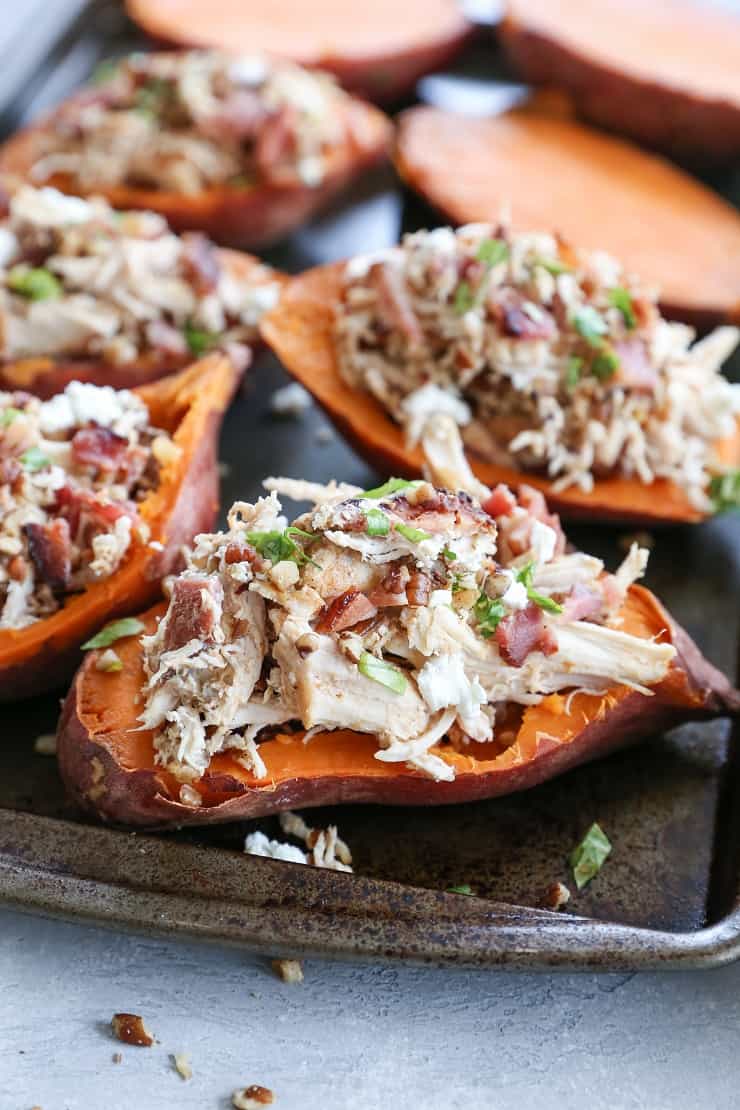 You can make this recipe in parts by roasting the sweet potatoes ahead of time, cooking the chicken, and/or making the shredded chicken filling in advance. If you’re under a time crunch and don’t have time to slow-cook the chicken, you can season the breasts and bake them for 35 to 40 minutes at 350 degrees in the oven (until the internal temperature reaches 160 degrees F). If you’re a fan of poached chicken, you can go that route as well!

Okay, now let us address the elephant in the room. What if we’re wanting this experience to become more than just an appetizer? Feeling like turning these potato skins into a meal? Get after it! In fact, these sweet potato skins made for an ultra-satisfying lunch for the boyfriend and I for a couple days in a row. The macronutrient quality of them is pretty epic, with “good” fats, a nice protein punch and very few carbs. All you’d need for a complete meal is toss in a side salad. 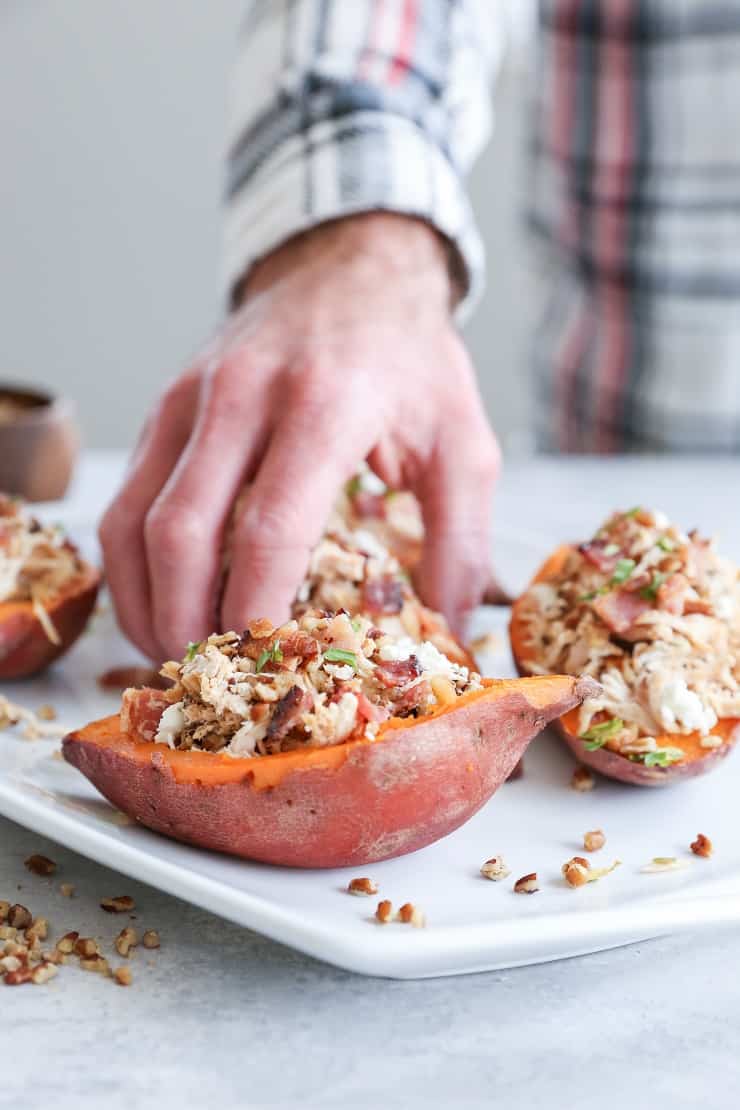 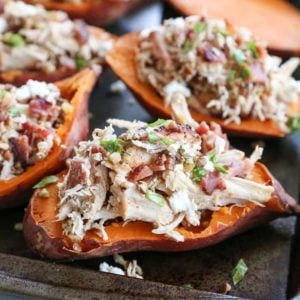 For the Slow-Cooked Chicken:

For the Sweet Potato Skins:

*save the bacon drippings! You’ll be using the grease to mix with the chicken 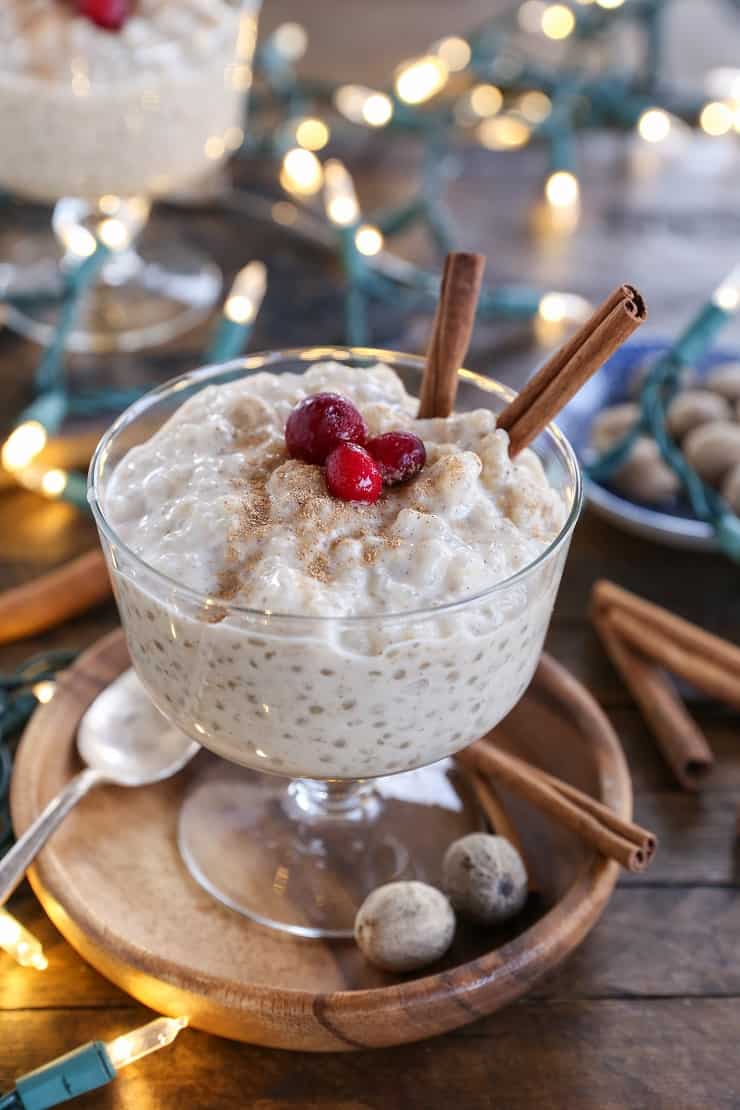 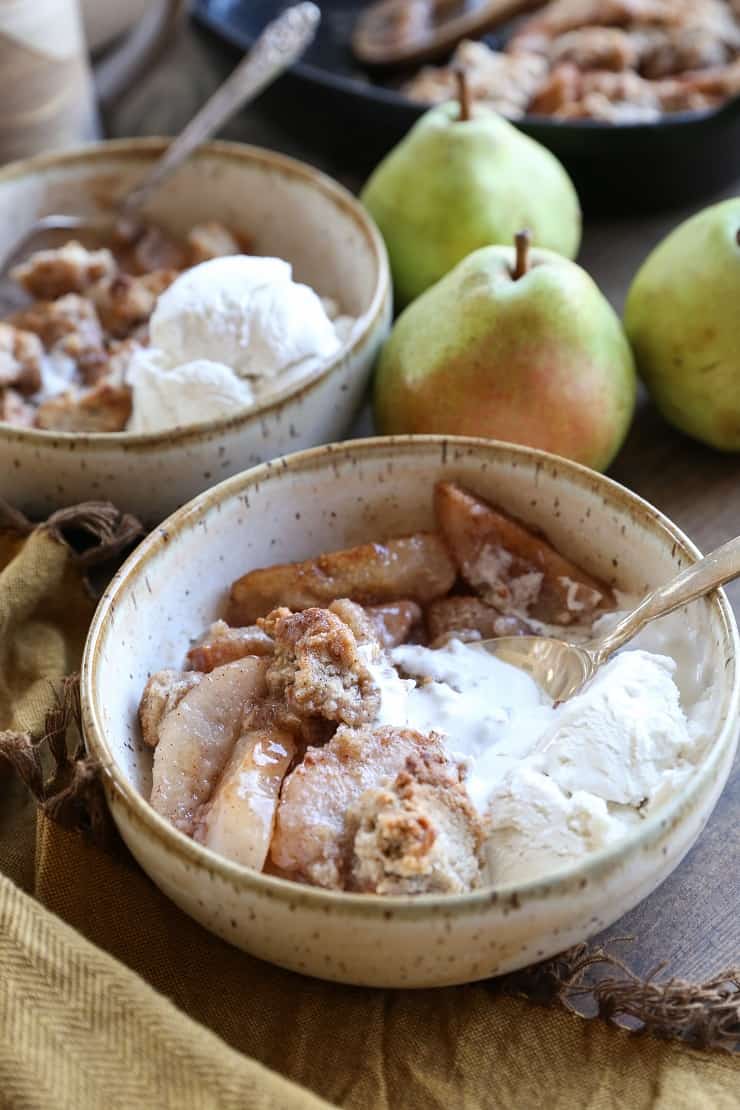 What can I substitute for the chili powder to make this AIP friendly?

These seriously seem like so much fun. They're a great alternative to regular stuffed potatoes and the flavor profile simply seems amazing.

Although, to be honest, what I like most is the way that they look on the plate.

I can definitely see these being popular for game day and get together food! Also, pecans just make everything better. Especially wintery foods like sweet potatoes!

Can I make these for dinner tonight? They look so yummy! I have leftover chicken and could add a salad. Badda-bing! Dinner!

Okay, I'm totally making these!! Pecans are my favorite nut and I LOVE bacon and goat cheese!!! Such a great combo here!