Easy Gluten Free Skillet Eggplant Parmesan made quick and easy in a skillet. Roast up some eggplant and enjoy this deliciously cheesy saucy meal!

Why didn’t we do this sooner? 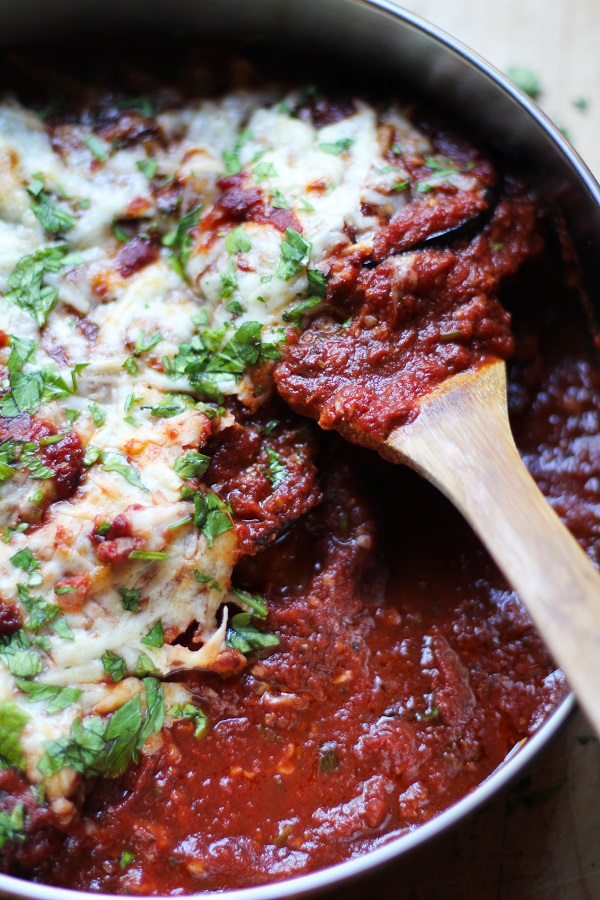 Something I haven’t told you re: myself: I love all things Parmesan. The years 2001 through 2003 marked an unruly love affair with Veal Parmesan.

Little known fact: Chicken, Veal, and Eggplant Parmesan were among the first meals I taught myself how to make, because: mozzarella. And since we’re on the topic, I never could figure out why these dishes are referred to as “Parmesan,” instead of “Mozarella,” but that’s beside the point.

Because these Parmesan dishes traditionally involve a flour-and-bread-crumb dredging, I haven’t made them since I stopped eating gluten a few years ago.

Sure, I could use a slew of gluten-free flours and bread crumbs, but it simply hasn’t been a priority. BUT I came across this Skillet Eggplant Parmesan recipe from Annie’s Eats, which involves zero flours and omits the step for leeching water out of the eggplant slices, and I knew I had struck gold.

This recipe. It’s the cat’s meow. It involves one skillet, few steps, and you can make it even easier by using your favorite store-bought sauce instead of making the sauce homemade. Although, I must say: if you have the time to make the sauce, maaaaaaaakethesaaaaaaauce!

For the Tomato Sauce:

For the Eggplant Parmesan

Note: You can make the sauce ahead of time and store it in a sealed container in your refrigerator until you’re ready to make the eggplant parmesan.

LOOK AT THAT CHEESE!! This eggplant parm is speaking my language. I want to grab a loaf of bread to mop up all that sauce, too!

mmmmmhmmmm! There's sooo much sauce - plenty for the bread dipping!

Woah - eggplant parm in a skillet?! Love this idea. Headed over to check out the recipe!

One skillet? I'm totally making this ASAP! More mozzarella in my diet is always a priority.

I am totally down with anything and everything that is referred to as the Cat's Meow and includes parmesan! I have a huge block of parm in the refrigerator right now that I just keep snacking on and can't stay away from! I love that you made gf eggplant parm! I looks delicious and I just want to dive right into that skillet right now! Going over to Kelly's to check it out right now!

Oh god this eggplant is all I am craving right now. Perfect for my vegetarian family too! A recipe I must make!