German-style potato salad with vinegar, bacon, caramelized onions, and chives – the perfect flavor-packed side dish for your picnics and barbecues.

Lately, I’ve been spelling things fuhneticly on axident, like “injoy” rather than “enjoy,” and “peeches” instead of “peaches,” and “beer” instead of “gym.”

A symptom of my brain on Thirty? Maybe. 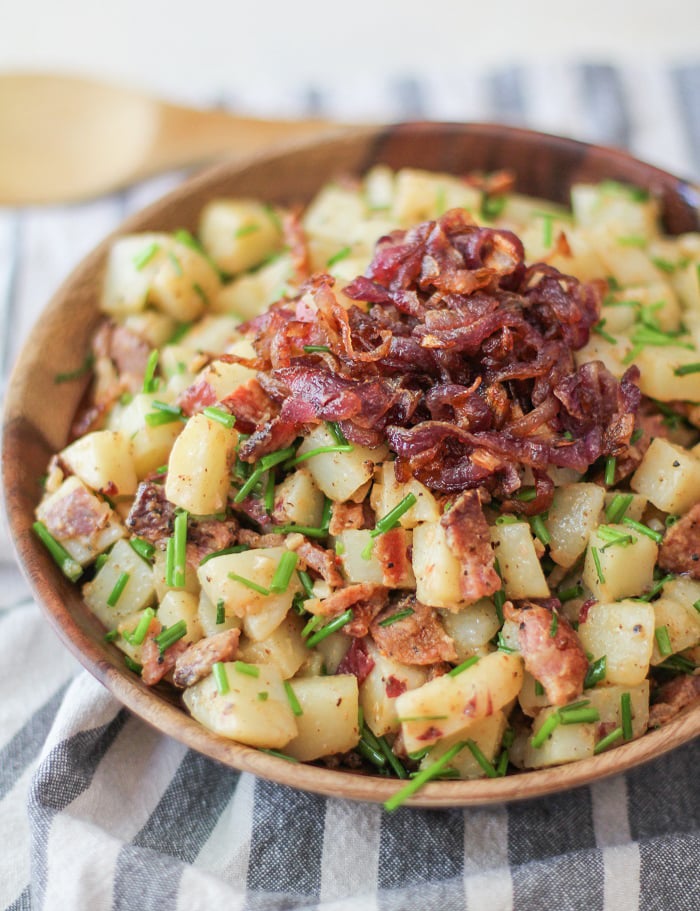 That, and the fact that it’s Wednesday and I’m still recovering from the weekend.

Speaking of which, does sugar make anyone else a lunatik? Like a blossoming peech one minute and a Hel deemin the next?

Dirty Banana. HAVE YOU HAD ONE? YOU MUST IN TECHNICOLOR ALL CAPS!! It’s a cocktail of bananas, and it will destroy your concept of reality. You really should investigate.

And then maybe go to the beer…err…I mean, gym. 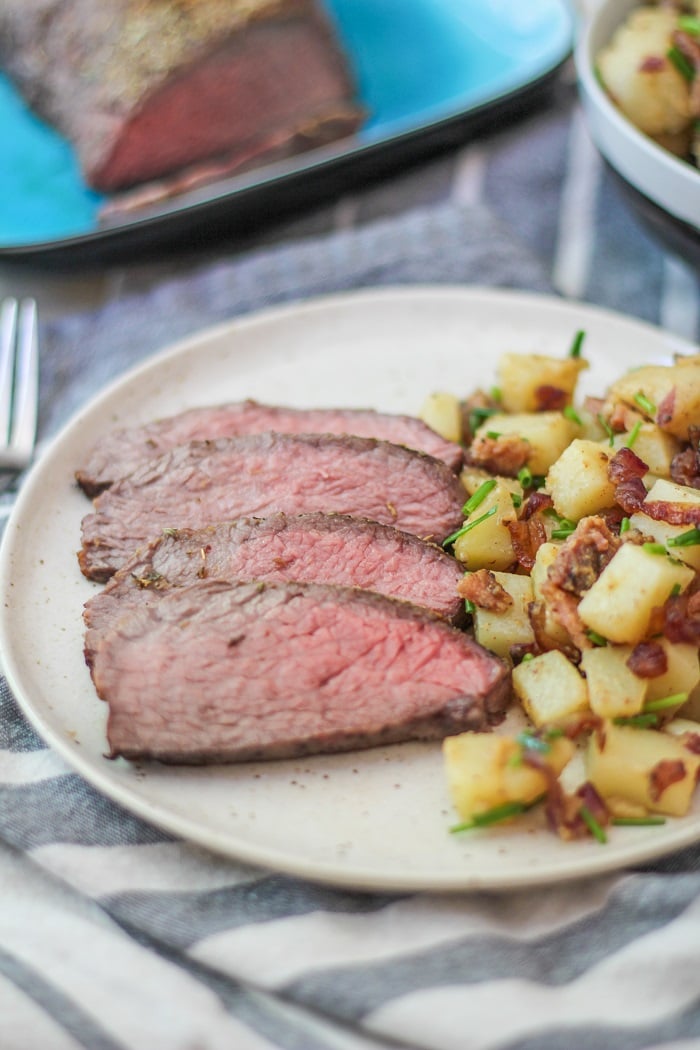 As you can probably surmise, rather than nature-ing all weekend as per ush, we went a little ape-y, which just threw off all the life chakras in the best of ways. We went to the Rodeo, napped on the beach, drank a bunch of dranks (i.e. Dirty Banana x3), saw some live music, and took care of loose odds and ends I had been procrastibating for some time.

FOR INSTANCE, I finally made my travel arrangements to Iceland for the photography workshop I’m attending in August, lead by Eva and Carey. I also acquired a travel adapter off Amazon (I went with Loop) to ensure there’s no loss of connectivity between me, my electronics, and you (wouldn’t that be a disaster?), made some techy changes to my blogsicle, and purchased some patio lighting (for nesting purposes). I may have eaten TWO burritos this weekend. Rebel. Blame it on the Dirty Banana.
This is scintillating. What are we even talking about? 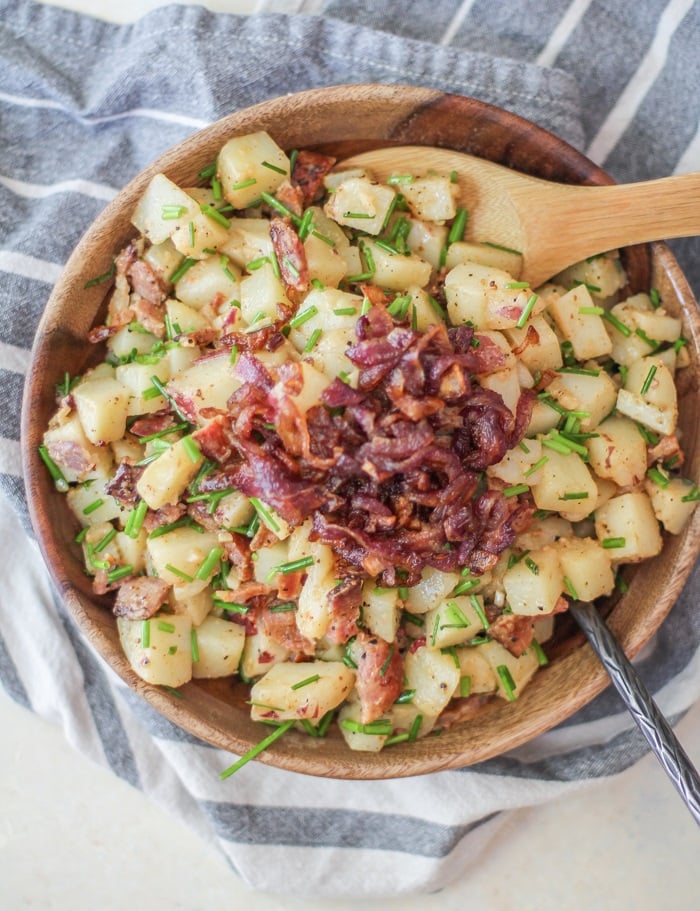 What makes German-style potato salad different from American-style potato salad? Rather than using mayo and hard boiled egg to tie everything together, we use vinegar and bacon fat. It is distractingly good. My potato philosophy stems from early childhood – way I see it, if we’re going to make something as sinfully delish at potato salad, let’s let bacon do the fattifying, rather than mayo. Just a personal preference. 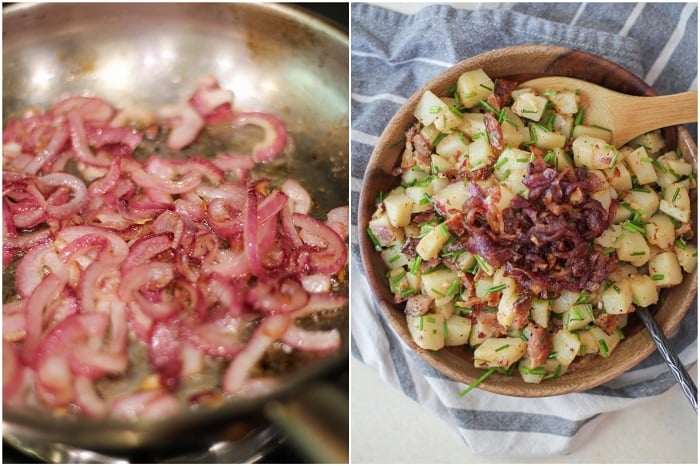 Going into this recipe, I hemmed and hawed over how to make this potato salad different from my first go at German-Style Sweet Potato Salad. I phoned a friend, lost some shut-eye, chased my tail in a few circles, and then it hit me like a ton of freaking bricks: caramelized onions. And chives. Genius of the universe right here.

We all agree that bacon and caramelized onions are two peas in a pod. Conway and Twitty, coffee and cream, cheese and macaroni…you get me. So we slam them together in a potato salad and the most insane of craniums happens:

Heaven
This potato salad can be served WARM OR COLD. I prefer it warm if you can believe it.  You can picnic it, or hot dinner dish it…whatever floats your catamaran.

Here’s how we make it. Injoy.

I enjoy this recipe but the fact that I cannot exit the video in the corner of my screen while trying to read the recipe is pretty annoying.

Do you serve warm or cold?? I've never had german potato salad.. And if you serve warm do you have to warm it up from the refrigerator to table? It sounds great.. I can't wait to try! :-)

You can serve the potato salad warm or cold...totally a matter of preference - I like it warm, and my bf likes it cold :) I typically heat it in a pot on a stovetop or in the microwave before eating it. Hope you enjoy!

Sounds like you had a fun weekend! :) I love German potato salad because I'm not down with mayo and I LOVE vinegar! With bacon fat too, there's no going wrong here. This is the potato salad of all potato salads!

Yes to all the potatoes! I love a good mayo-free potato salad, and bet the caramelized onions take this one over the top.

BTW I drank dirty bananas in Jamaica and they were THE BEST. I'll have to make one now that you've reminded me!

Wow... this is the best potato salad I've ever seen!