Easy Dairy-Free Keto Sausage Gravy that is thick, creamy, and perfectly seasoned! Only seven basic ingredients are needed, and you can use your favorite breakfast sausage and whip up some biscuits and gravy! Low-carb (keto) and gluten-free! 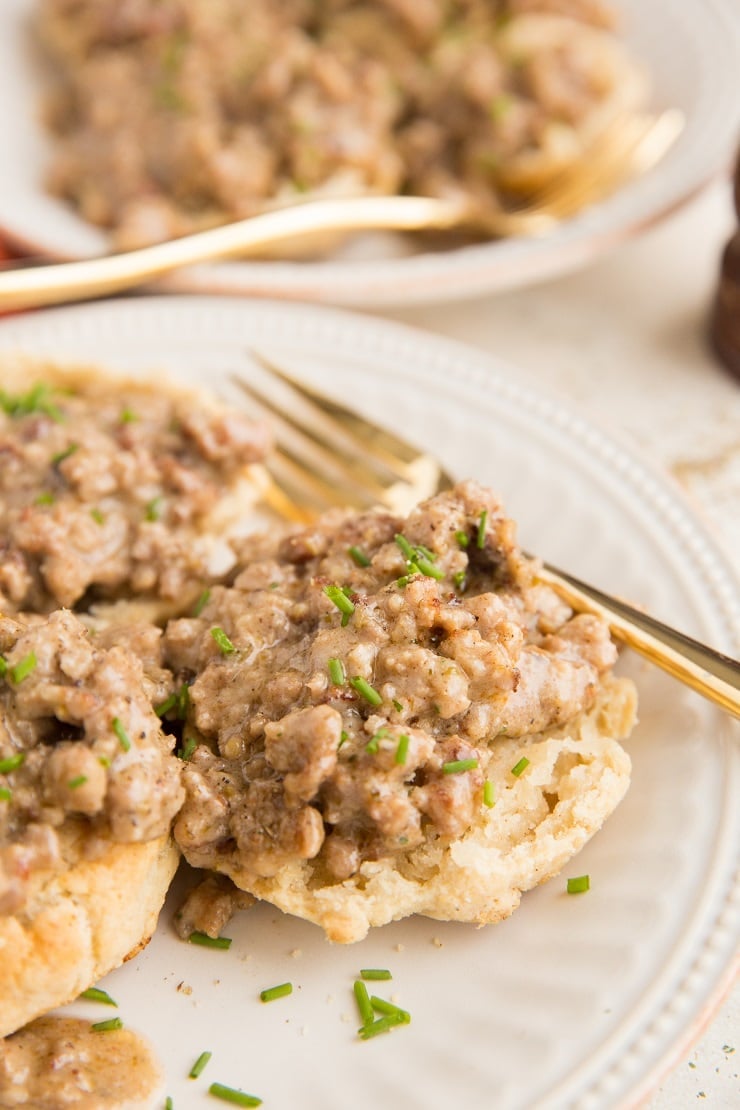 In a world so divided, it appears as though there are two types of people: those who love gravy with all the force of a great typhoon, and those who refuse it 12 out of 10 times.

My partner is the captain of the former team, where I am the spokesperson for the latter.

Truth be told, gravy doesn’t sit at the top of my To Eat list; however, after I made this recipe, I am able to embrace the appeal, especially when it is engulfing a fresh out of the oven fluffy homemade biscuit.

After making my Dairy-Free Condensed Cream of Mushroom Soup recipe, the idea of making a dairy-free sausage gravy option sauntered right into my brain.

Because biscuits and gravy is an important topic of conversation in my house, I’m betting there’s someone in your life who champions that epic plate of gravy-loaded buttery biscuits every time you go out for breakfast.

So for those of us who don’t do well with the dairy, here is our dairy-free homemade sausage gravy solution so that all of our biscuits may be swaddled.

Thick, creamy, meaty, and sultry, sausage gravy and biscuits is here for that special occasion breakfast when calories don’t count and combining carbs and fat is a recipe for bliss.

Let’s chat about the seven simple ingredients needed to make this recipe. 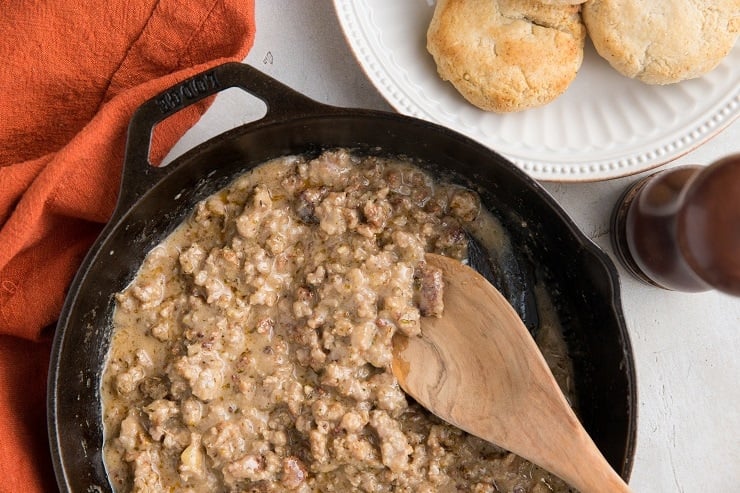 Ground Breakfast Sausage: The star of the gravy show! Choose your all-time favorite breakfast sausage for the best results. I like chicken sausage or turkey sausage that I get from the butcher at Whole Foods. The sausage is what generates the majority of the flavor in the gravy, so be sure to use a brand you’re familiar with that is generously seasoned.

For anyone with food sensitivities, I recommend using sausage that is nitrate and nitrite-free as well as sugar-free.

Classic sausage gravy is often made with Jimmy Dean sausage, which is my partner’s preference.

Full-Fat Canned Coconut Milk: Classic sausage gravy is made with milk, but we replace the milk with full-fat canned coconut milk to make it dairy-free. This generates a thick and creamy gravy that mimics the exact texture of gravy made with regular milk.

I don’t recommend replacing the full-fat coconut milk with any other non-dairy milk. Many non-dairy milks from a carton (like almond milk) separate when they reach a boiling point and they also come with a flavor that is non-conducive to delicious gravy.

If you’re looking to lower the calories in the gravy, you can use light canned coconut milk, and add more flour to thicken it up.

Rice Vinegar: Vinegar adds the slightest tang, which cuts the natural sweetness of the coconut milk, making the gravy taste like it’s made with milk versus a non-dairy milk.

While this ingredient is not mandatory, it is great for those who don’t love the taste of coconut milk, as it helps to mask the flavor. You can use cider vinegar or lemon juice as a replacement.

Remember that most sausage is already seasoned well with salt so don’t add salt until after tasting the gravy first. It is remarkably easy to end up with gravy that’s too salty!

Gluten-Free Flour: In order to thicken the gravy, we add a small amount of gluten-free flour. I use Bob’s Red Mill’s Gluten-Free 1-to-1 Baking Flour, but any comparable blend will work. To make the gravy paleo and whole30 friendly, use tapioca flour or arrowroot starch.

If you aren’t gluten-free, you can use regular all-purpose flour.

The amount of flour you need may vary depending on the brand of canned coconut milk you use. Some brands thicken very easily where others require more flour to thicken. Simply add flour two teaspoons at a time and give it plenty of time to thicken before adding more. I found 2 teaspoons was plenty for my gravy.

Now that we’re experts on the ingredients, let’s make it! 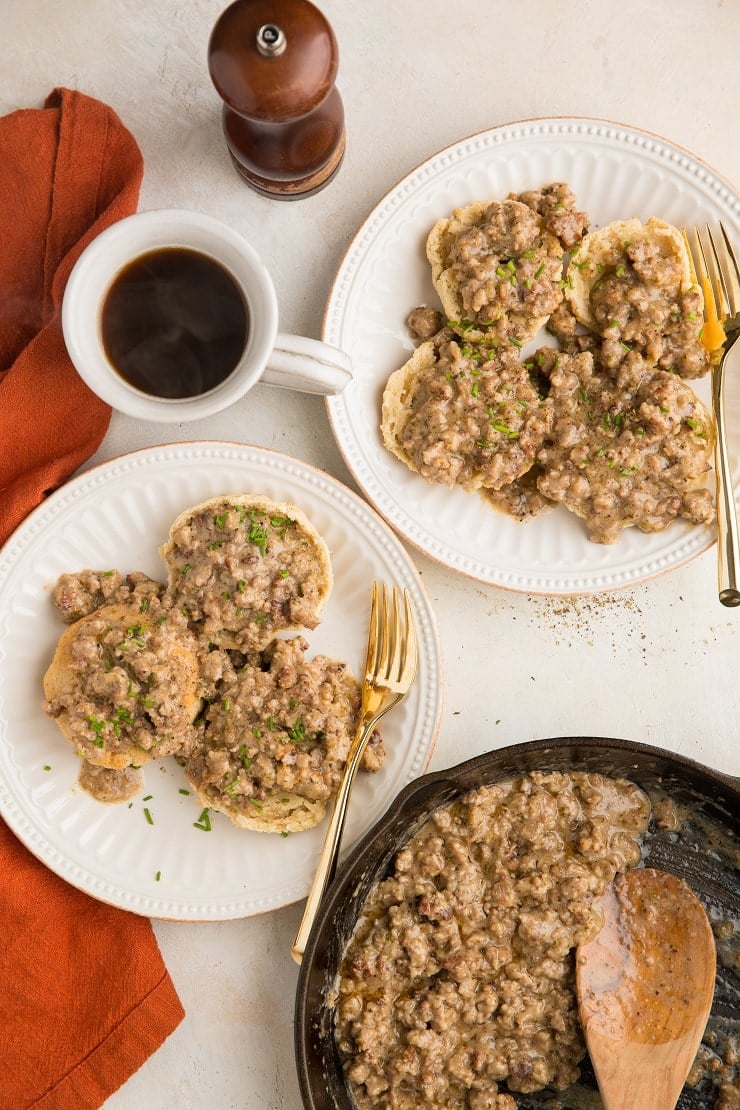 How to Make Sausage Gravy:

Heat a large skillet (10 inches or larger) over medium-high heat on the stove top, place the ground breakfast sausage on the hot surface, and use a spatula to smash it down into a large patty. Allow the sausage to brown for a few minutes before breaking it into smaller bits. Continue cooking and breaking up the sausage until it is cooked through. 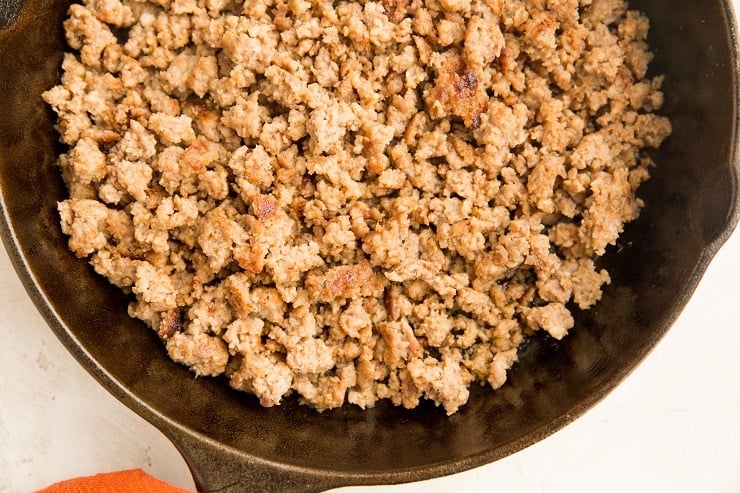 Stir in the garlic powder, onion powder, and dried oregano. 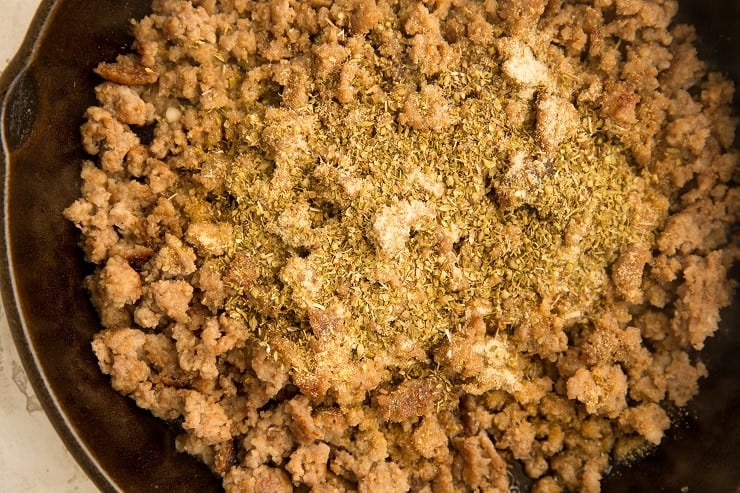 Pour the coconut milk and rice vinegar into the skillet and bring the mixture to a full boil. Add the flour and whisk well until the flour is incorporated into the gravy. Allow the mixture to boil, stirring occasionally, until it reaches your desired thickness. 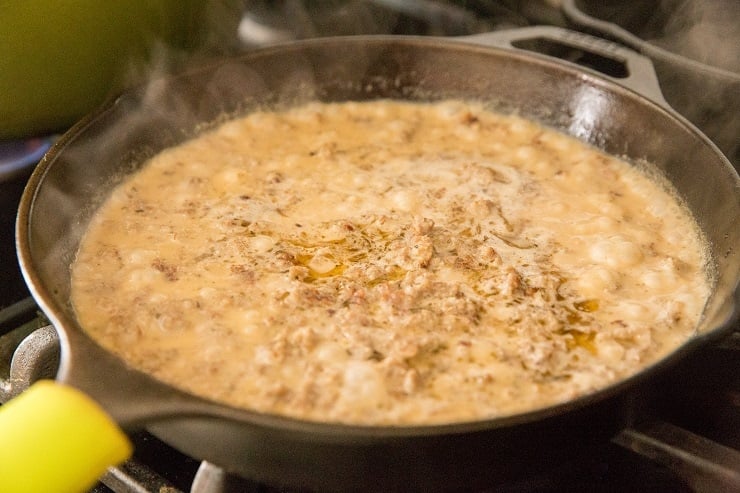 The gravy will thicken substantially as it sits. For very thinner, saucier gravy, use one and a half to two cans of coconut milk instead of 1 and add an extra tablespoon of flour.

Taste the gravy for flavor and add sea salt to taste. 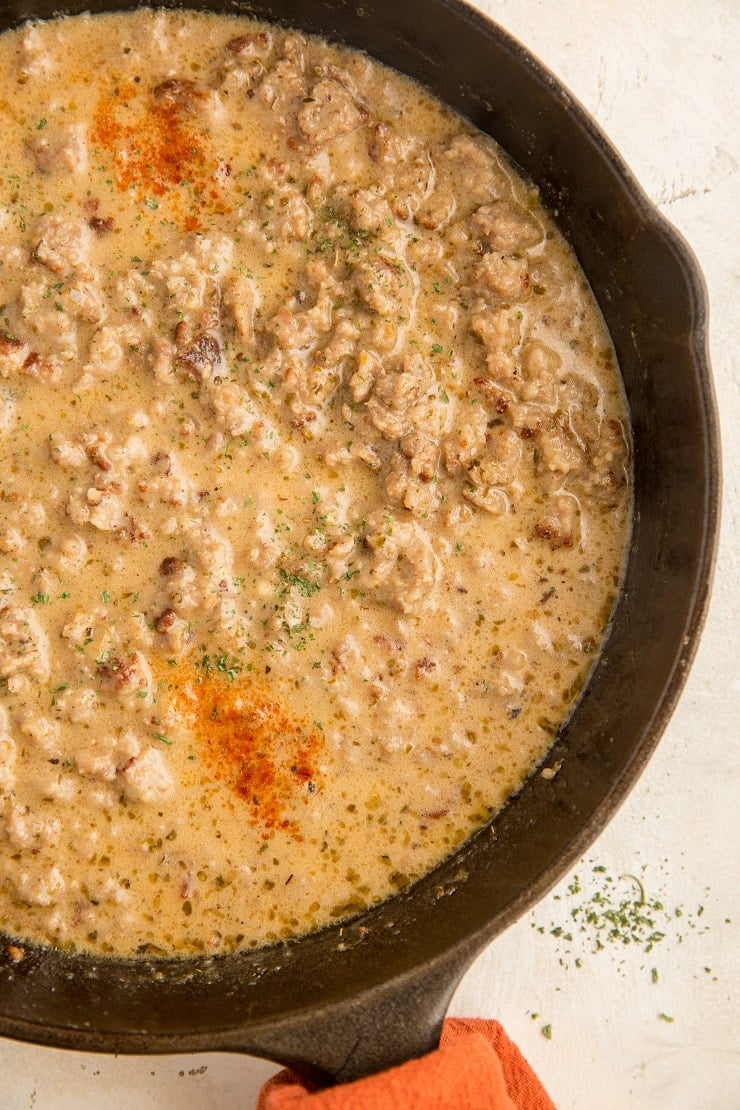 Use this sausage gravy to make biscuits and gravy, smothered breakfast burritos or serve on top of hash browns or home fries.

After the gravy sits, the sauce will be very thick. It will thin out a bit once you heat it back up. If you prefer more liquid in your sauce, add another half can to full can of coconut milk to reach your desired consistency. 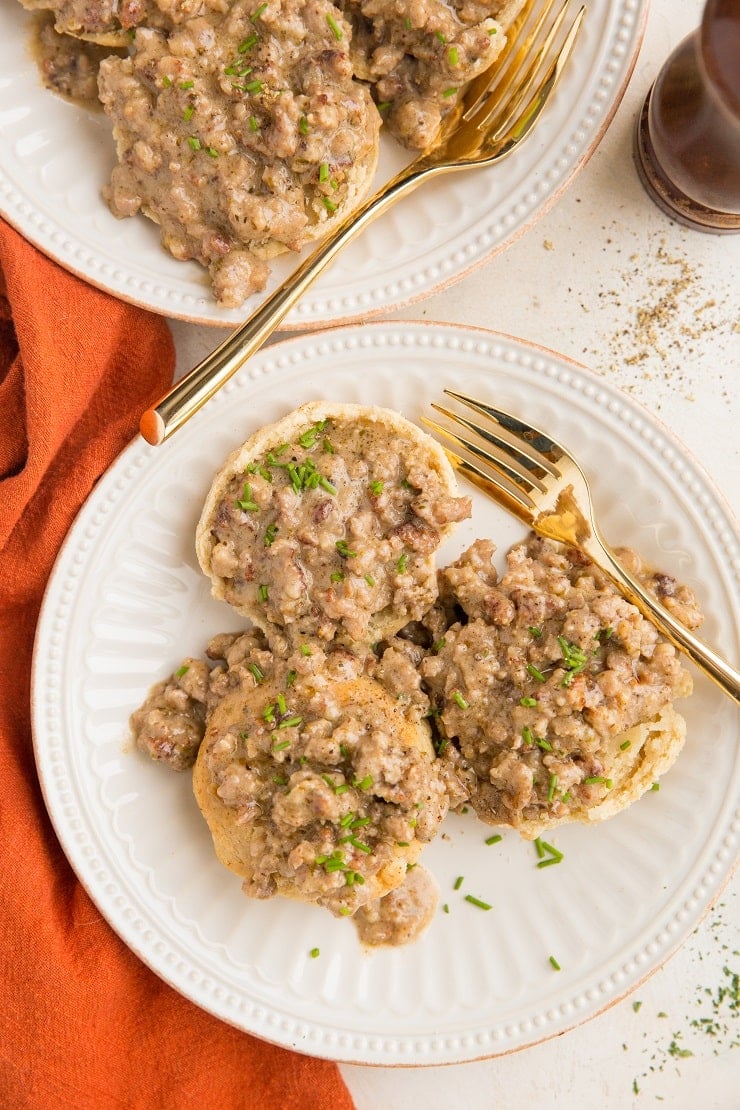 For classic gluten-free buttermilk biscuits, you can make these Gluten-Free Biscuits from Mama Knows Gluten Free, which also includes dairy-free and vegan options.

What else can you do with sausage gravy?

Smother your breakfast burrito in it (wet burrito style), or top your hash browns, home fries, breakfast casserole, or frittata in it. 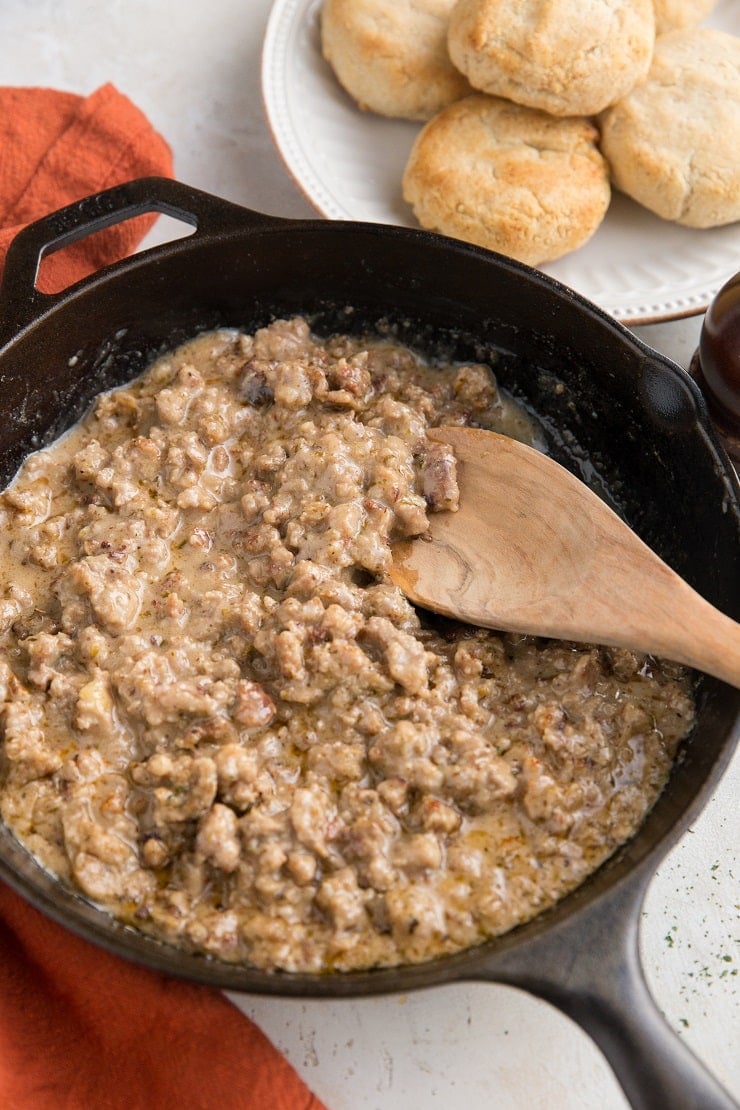 Can You Freeze Sausage Gravy?:

In general, most gravies can be frozen and reheated easily while preserving the texture and flavor. The same can be said for this gravy recipe. Simply store it in a freezer-safe container for up to 2 months.

When you’re ready to use it, thaw it in the refrigerator overnight, then heat it over medium heat in a saucepan on the stove top, stirring regularly, until it is piping hot. 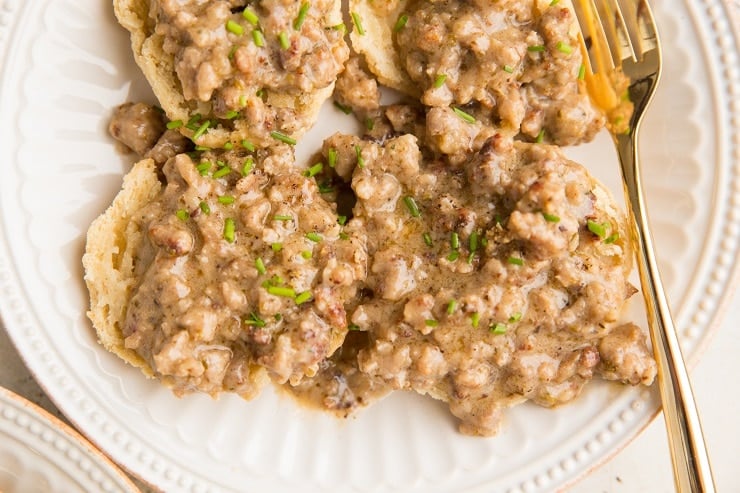 Enjoy some epic biscuits and gravy!

*For thinner, saucier gravy, use two cans of coconut milk and 2 tablespoons of gluten-free flour.

**Depending on how thick you like your gravy, you may need to add more gluten-free flour. Add one tablespoon at a time, giving it plenty of time to cook into the gravy before adding any more. 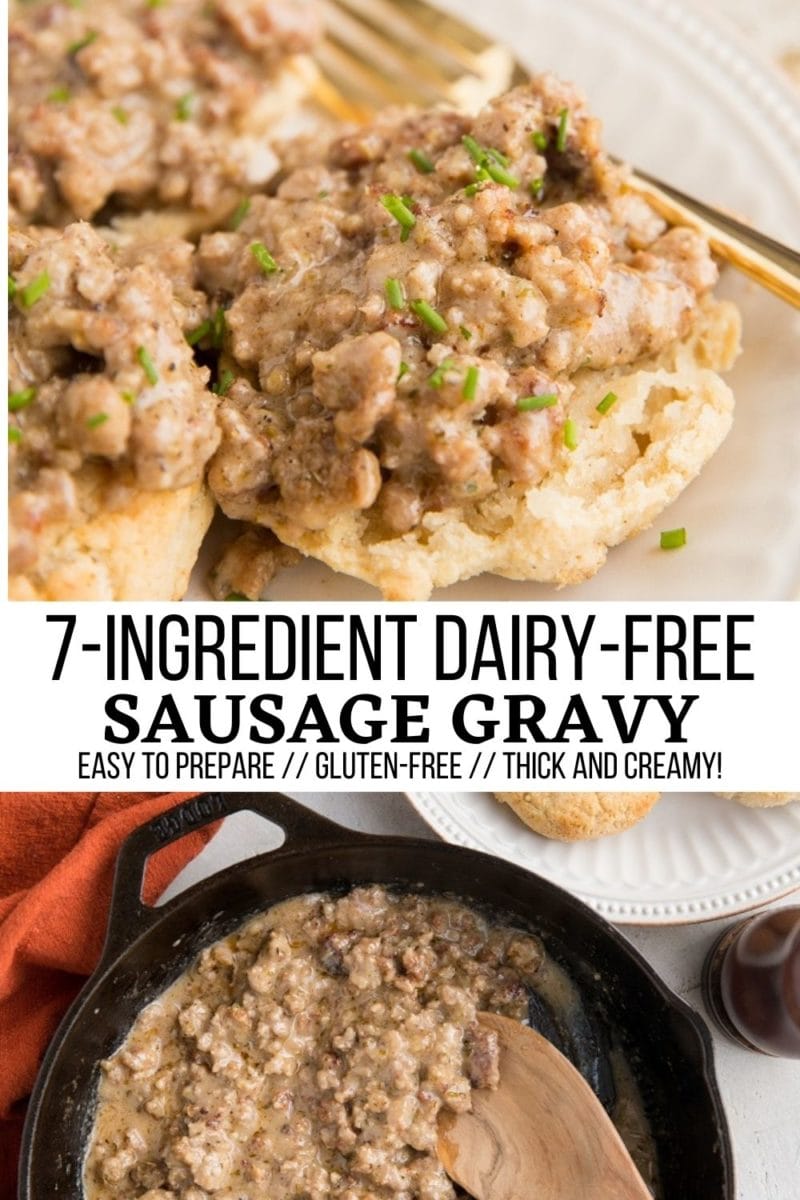 I use corn starch as a thickener. Whisk a few tablespoons of corn starch with just enough water that it becomes liquid, then slowly trickle ot into the boiling gravy while whisking it. There you have it, lump free creamy gravy!

I love it! Thanks so much for your input! This is very helpful to other folks who prefer to use cornstarch. xoxo