Easy, delicious chicken corn chowder perfect for serving the whole family! Make it for meal prep to enjoy throughout the week!

Cozying up with chicken corn chowder during a rainstorm is precious moments.

We had a three-day downpour over the weekend and while it’d be smart to use rain days to catch up on laundry, reorganize the Tupperware cabinet or do some online Christmas shopping, I instead opted for soup, movies and pinterest.  It’s amazing how much pinning one can accomplish when it rains.

What you need to know about this chickeny bacony corn chowder is that every bowl in your house needs to meet it.

I didn’t overload the chowder with tons of cream, butter and flour. Instead, I kept it on the lighter side and only added ½ cup of half & half.

The bacon gives the chowder a wonderful smoky flavor (make sure you use good bacon, now, ya hear?) and the corn adds a sweet, creamy balance. It makes your belly smile. 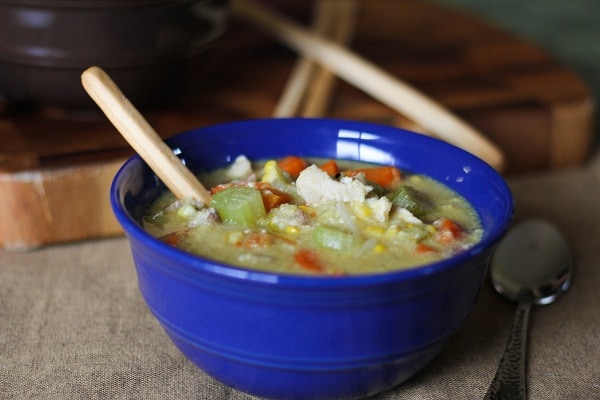 Wait a second...WAIT A SECOND. I have EXACTLY 1/2 cup of half and half in my fridge and a whooooole lotta leftover turkey in my freezer! Was this meant to be??? (I think so)

Ahhhhh...looks like a perfectly cozy bowl of yum for this winter!

I cannot get enough soup these days! This looks fabulous.