Looking for a simple, healthful, low-carb dinner recipe? The Blackened Salmon with Cajun Garlicky Kale from my cookbook, The Quintessential Kale Cookbook is a fabulous paleo-friendly, keto meal. 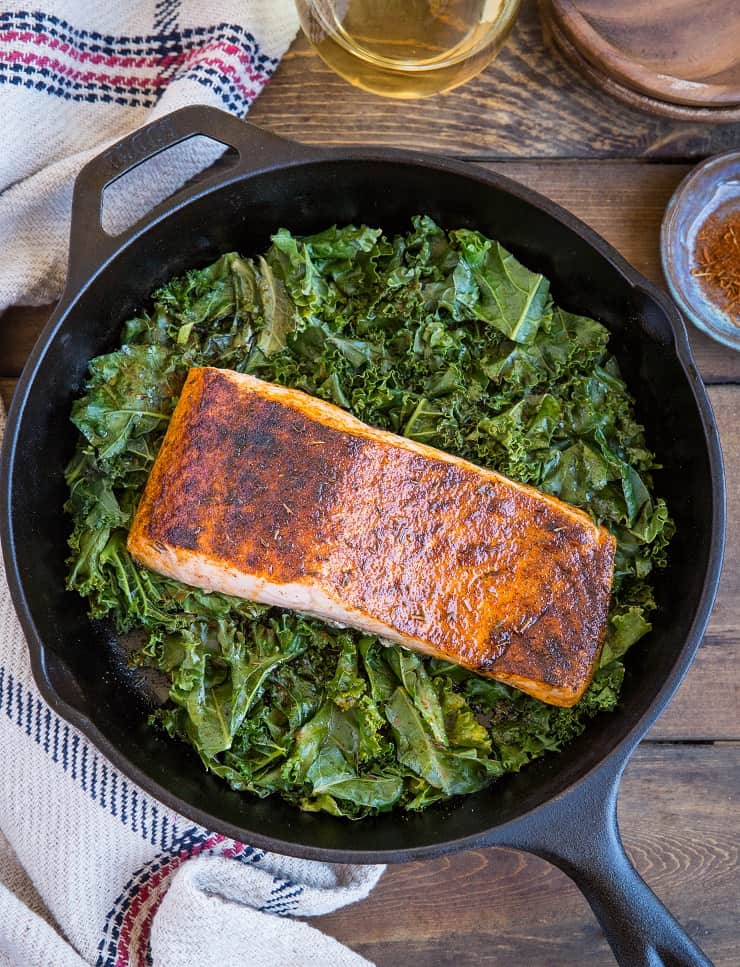 Once upon a time, I wrote a cookbook called, Let Them Eat Kale!. Do you remember it?

It was the second cookbook I wrote (the first being Delicious Probiotic Drinks) and was published back in 2014. I wanted to bring it back into the limelight, as my publisher and I re-released it back in January with some changes!

It was released under a new title, The Quintessential Kale Cookbook. Lettuce discuss!

First and foremost, we changed the title of the book from Let Them Eat Kale! To The Quintessential Kale Cookbook. The cover photo is now different (brighter and more attractive, I might add). I also revised some of the recipes, re-edited or re-shot all of the photos and added an additional 15 recipes (bonus chapter!).

The book now includes 90 recipes all featuring our favorite superfood: kale! There are recipes for breakfast, dinner, soups, salads, and sauces. Don’t worry, I skipped the dessert section. 😉

In this sense, the recipes in The Quintessential Kale Cookbook are great staples for keeping a healthful diet and are straight-forward enough to whip up on any weeknight.

One of my favorite recipes from the book continues to be this Blackened Salmon with Cajun Garlicky Kale. 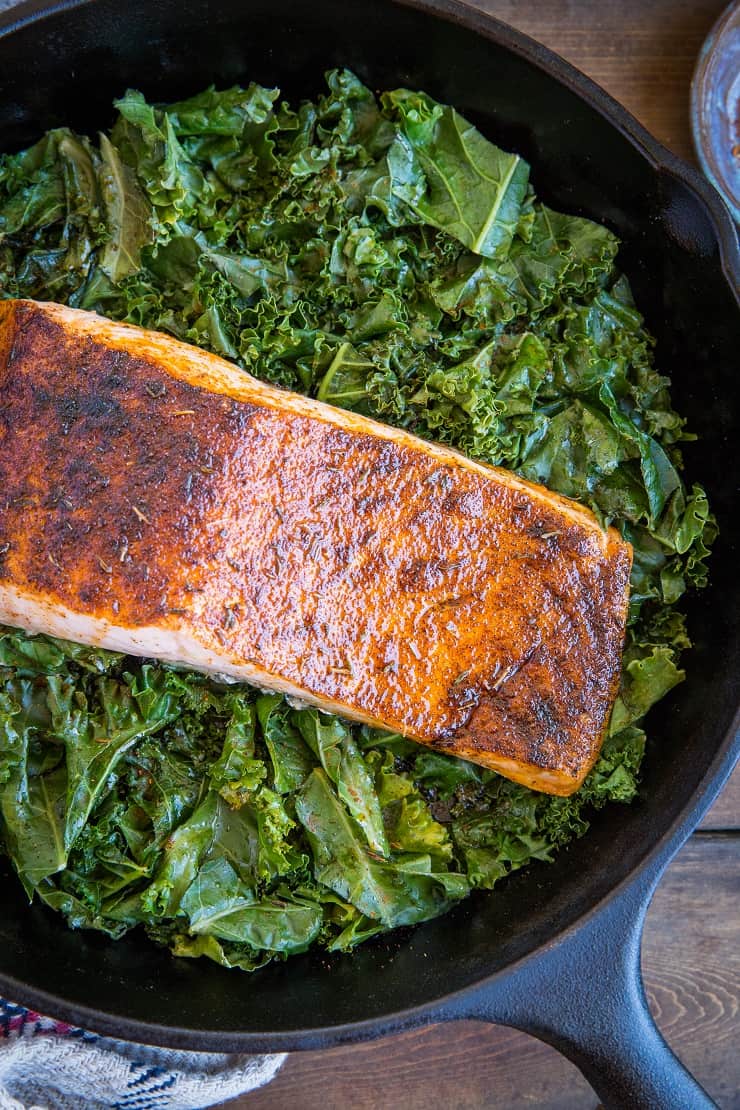 It’s so quick, easy, nutritious, and perfect for throwing together after work. I find when I get overly hungry, I have a tendency to go for the quickest thing I can possibly put in my face. This is one of those meals that comes together lightning quick to help calm the hangry monster ASAHP.

PLUS it has that date night appeal, because salmon makes everything fancy, right?

Cooking salmon in a skillet is super easy! I love that it crisps up the skin so you get the crispy-on-the-outside yet still tender-on-the-inside effect. If you prefer cooking your salmon in the oven, be sure to check out My Go-To Crispy Salmon Recipe. If grilling is your preference, take a looksy at The Only Grilled Salmon Recipe You’ll Ever Need.

Plus that garlicky kale is something to write home about!

If you prefer making spice blends at home rather than store-bought, you can whip up your own Cajun seasoning blend.

How to Make Cajun Seasoning:

Simply stir together the following ingredients in a bowl until well-combined:

Well let’s hop to it! I hope you enjoy this meal as much as I do! 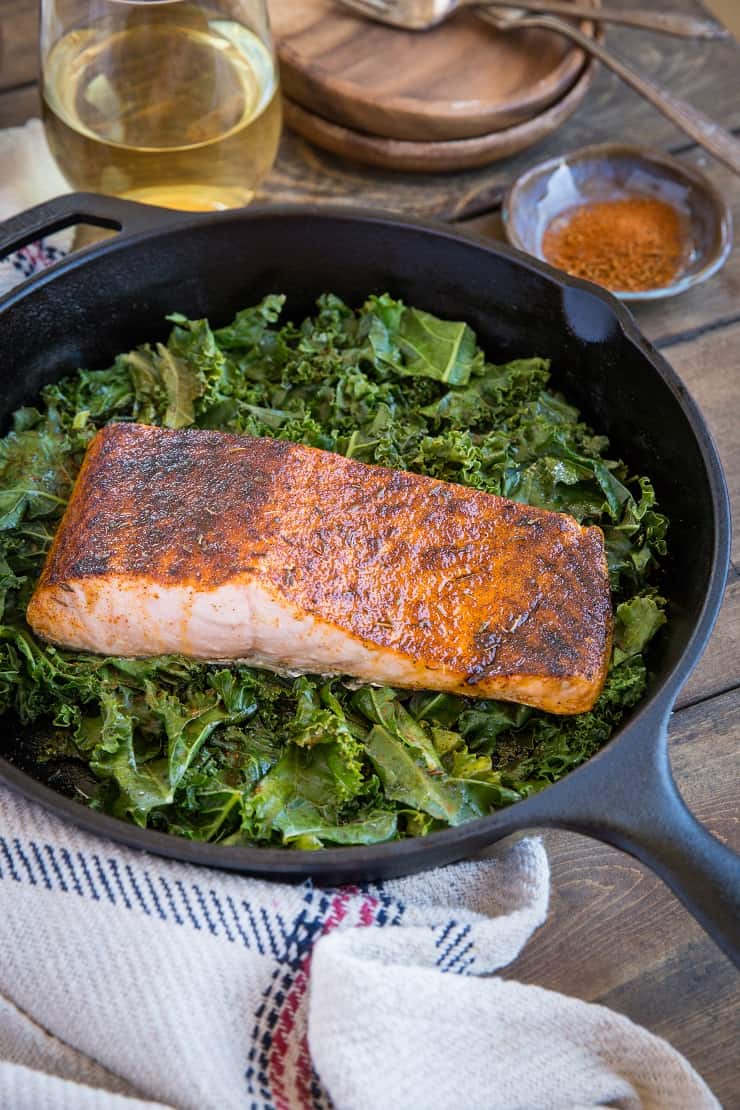 And please be sure to…

Check out The Quintessential Kale Cookbook on Amazon! 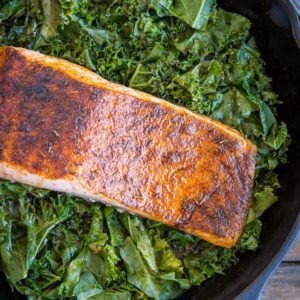 A low-carb dinner recipe requiring only a few basic ingredients.

Before roasting your Thanksgiving Turkey, be sure

Almond Flour Dinner Rolls! This is a grain-free, d

Current haps: making my favorite comfort food of a