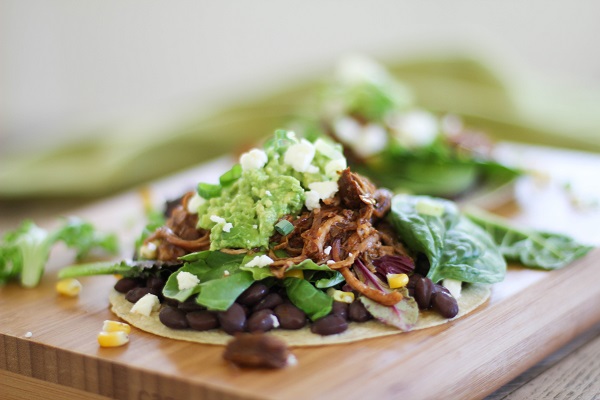 As we move through life, approaching it from certain angles, snapping photos, documenting, we can lose track of everything outside of the picture. We get stuck looking through the same lens, shooting with tunnel vision and forget to drop our shoulders, breathe, and open up to the rest of the scene. We get focused because we found something beautiful but forgot there is other beauty outside our lens.

Yesterday morning, I was slightly late to spin class on account of the second cup of frothy-milk coffee that I just haaaad to make before getting in my car. I normally sit in the second row a little left of center. Because of my frothy coffee tardiness, the class filled up before I claimed my usual spinner bike so I took one that was right next to the window in the very back of the room, where I could get a side profile of all my fellow early-morning spinner buddies.

Typically I’m too tired, drenched, focused, to pay attention to anything other than holding in my burps but yesterday I had the best seat in the house. There were moments when the whole room was in complete synch. We breathed together, ached together, moved together; we were riding as a team and we were giving each other energy and smiles of encouragement.

Have I been a part of this well-oiled machine all along? Or did I just now join Team Greg because I was looking at all the LeMonds from a new vantage point?

Just like moving from one angle to another, we get a new feeling from our new view. Maybe we’re more patient with each other. Sympathetic. Trusting. Forgiving. Maybe we’re just a kick ass team of individuals with the same name, same goal, different shirt. 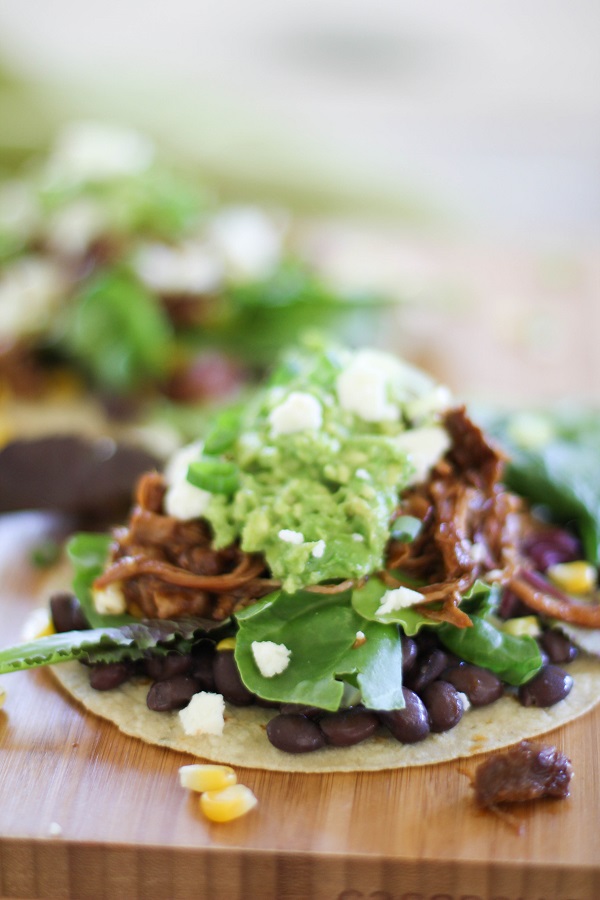 This is more of a suggestion than a recipe. An I-suggest-you-make-this non-recipe suggestion. It’s stupid easy to the point where I’m almost slightly ashamed to post it….almost in the sense that I’m not really ashamed at all…but kind of ashamed….but lookit how pretty they are..

Yup, this involves a crock pot in spite of the fact that it’s a million degrees outside and I’m getting upper-lip sweat just thinking about any of you turning your crocks on. Yes, if you look at my tortillas you’ll notice they’re still tortillas…someone over here may have forgotten the step that makes a tostada a tostada, but worry not, I included proper instructions to get this thing done right. Yes, this is not an exact science kind of recipe, which is what we can all use from time to time. A little free-style and a little less focus. 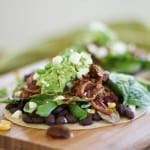 For the BBQ Pulled Turkey

To Prepare the BBQ Pulled Turkey

To prepare the tostada shells:

To Make the Guacamole:

To prepare the Tostadas:

*I used a dark meat Diestel Turkey roast. I cut off the netting and layed the meat out flat. You can also use chicken thigh meat. Chicken breast meat is acceptable, but it won’t turn out as moist and wonderful as dark meat. Just sayin.

You know what would also be great in these tostadas??  Jalapeño Ginger Cauliflower Rice!!

Oh its cold and winter here so i will happily get my crock pot out and make this! Gorgeous recipe, never thought to use turkey thighs as a base for tostadas but considering what a healthy and lean meat it is I can't wait to try it. Your description of the spin class was really moving, group fitness is great in that respect that you feel so connected to a bunch of strangers who for the duration of the class are your friends supporting you to get through the work out.

I'll take your suggestions any day of the week. These look delicious!!!!

(I laughed out loud at your line about holding in your burps. I really think you might just be my mother's child.)

A little free-style and a little less focus, and a lot of these tostadas in my belly = best way to be. :)

I'll take these and raise you a cold Mexican beer with lime. Mmm that would go nicely!