Soft and chewy vegan snickerdoodles – a dairy-free, refined sugar-free, and fun to make, I have included two recipes in this post – a grain-free version and a gluten-free version. These snickerdoodles are the perfect holiday cookie for giving to your loved ones!

This post is Sponsored by Bob’s Red Mill. Check out more delicious healthy recipes, snag coupons and find stores near you at BobsRedMill.com! 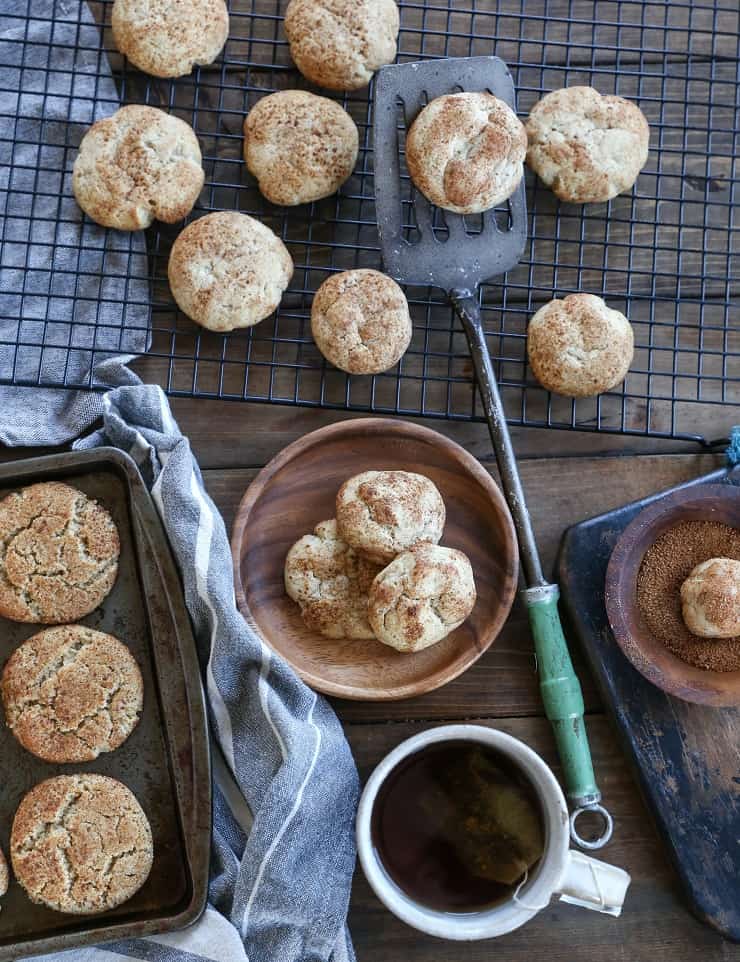 Who here is obsessed with baking-it-forward during holiday season? The older I get, the more adamant I am about edible gifts.

Truth be told, material items mean very little to me, so I love the idea of giving something that requires thought, energy, and creative prowess to my beloved people. Plus, who doesn’t love a homemade treat?!

The ladies in my family get together every year a week or so before Christmas to bake all of our traditional family treat recipes. It’s an all-day or all-night production and gives us time to catch up with each other.

Once everything is baked and cooled, we package up our creations into holiday containers so that we can give out our variety treat boxes as gifts.

I absolutely love this tradition because for me, there are few things in life that are more therapeutic than baking, I love the female synergy, and there’s something so gratifying about baking for others. 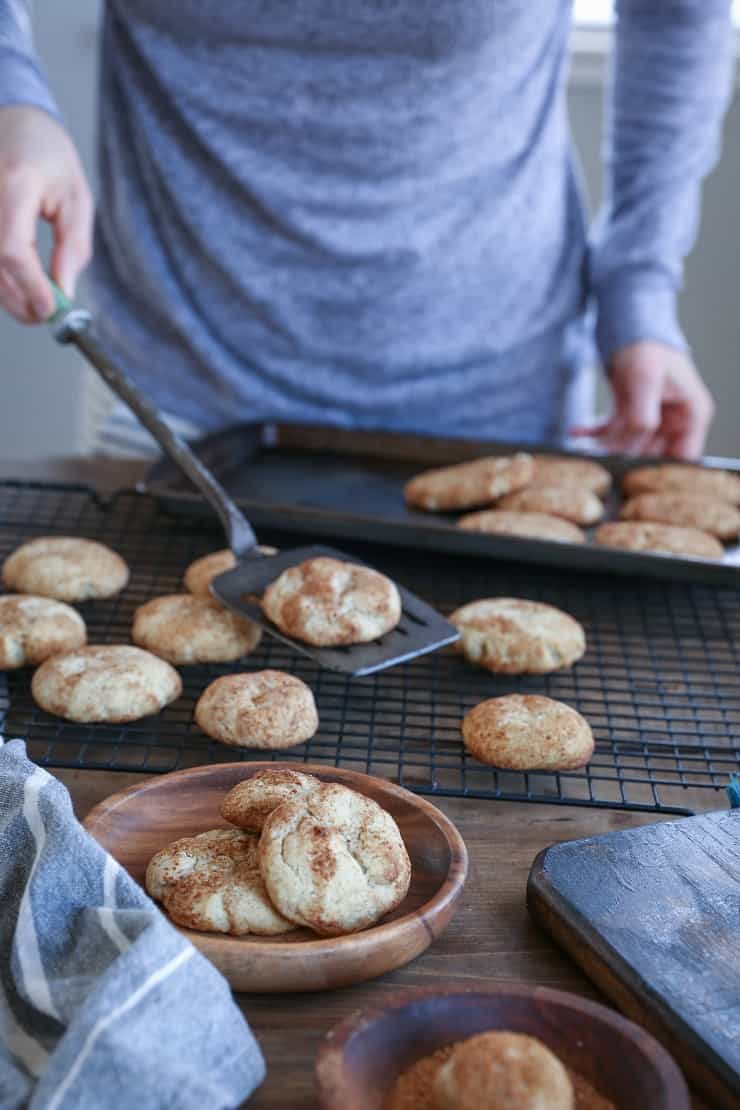 I feel like snickerdoodles are that year-round favorite for so many of us cookie lovers, but they become especially relevant during the holidays when we’re whipping up ginormous batches of treats to gift to your people.

While my family typically goes full-tilt traditional using regular all-purpose flour, butter, and sugar, I always whip up my own batches of allergy-friendly treats to share with you all on the blog since so many of us have food intolerances.

I get asked all the time for more vegan treat recipes, as so many of you eat not only a gluten-free or grain-free diet for medical reasons, but also a lot of you are allergic to eggs (or choose to go egg-free for ethical reasons). For this reason, I got a bee in my bonnet to develop the perfect snickerdoodle recipe sans eggs, dairy, refined sugar, and gluten.

I made these vegan snickerdoodles two different ways – a grain-free, paleo version using almond flour and pure maple syrup, and also a version using gluten-free all-purpose flour for those who eat vegan and gluten-free but not necessarily paleo (we’ve got options, people!). 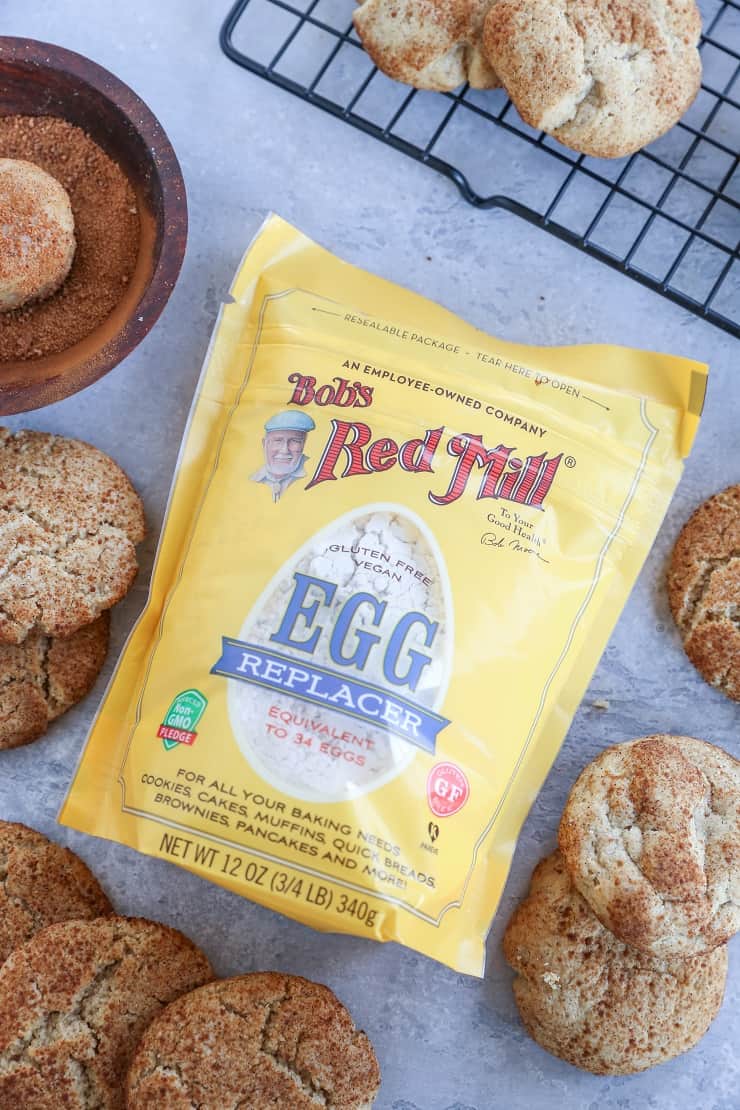 All you do to make the equivalent of one egg is combine one tablespoon of the egg replacer with two tablespoons of water. The mixture thickens to the consistency of an egg and acts as a leavening agent.

The egg replacer is so spot on, you’d never in a million years guess the cookies were made without eggs.

The egg replacer is a combination of potato starch, tapioca flour, psyllium husk, and baking soda.

I’ll just address the elephant in the room right now: For a long while, all white potatoes were no bueno according to the diehard paleo-ists, but these days, potatoes are widely accepted in the paleo community so long as you don’t have gut issues like SIBO that starchy potatoes upset.

In essence, so long as you aren’t intolerant to potatoes, this egg replacer will fit into your paleo lifestyle just fine.

For those of you who have commented or emailed me regarding an egg replacer option on a specific recipe, I highly suggest you check out this product!!

I’ve made plenty of vegan recipes using applesauce, flax eggs, and/or bananas and oil to replace eggs, but in my experience, nothing has come close to this egg replacer. It’s fool-proof, consistent, and works like a charm! 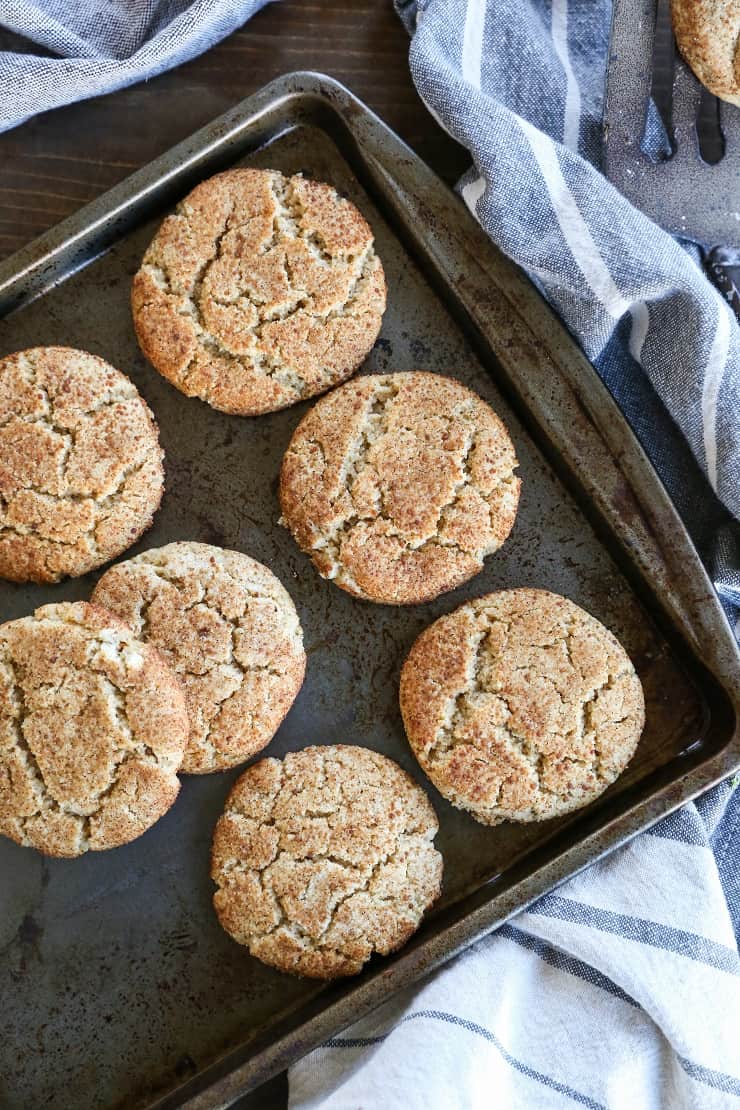 (^^this is the grain-free version).

Okay, back to the two versions of this recipe.

I used coconut sugar and cinnamon for rolling both versions of the cookies, which is why they appear slightly browner than your traditional snickerdoodle.

If you are okay with cane sugar, you can definitely take the traditional route and sub granulated sugar for the coconut sugar.

My honest preference between the two versions is the paleo version because the cookies turn out so perfectly chewy and sweet.

Plus, the fact that they’re made will almond flour makes me feel like they’re a healthy snack, so I’ve been popping them in my mouth while making breakfast in the morning. 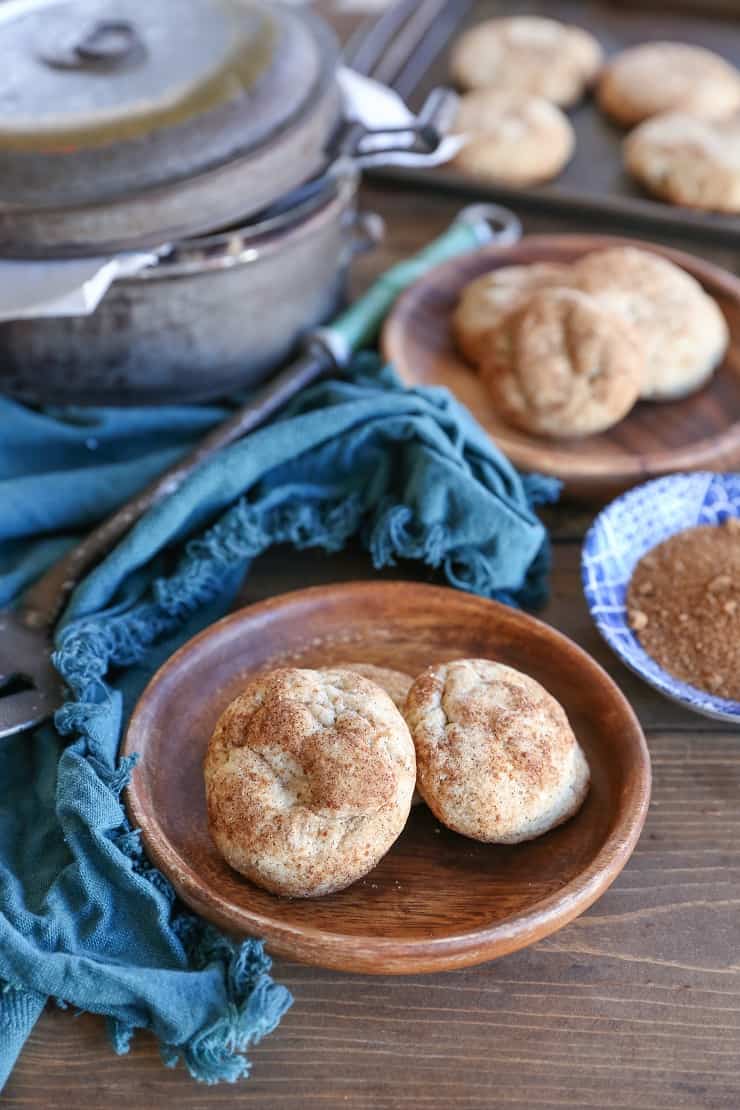 (^^This is the gluten-free version) 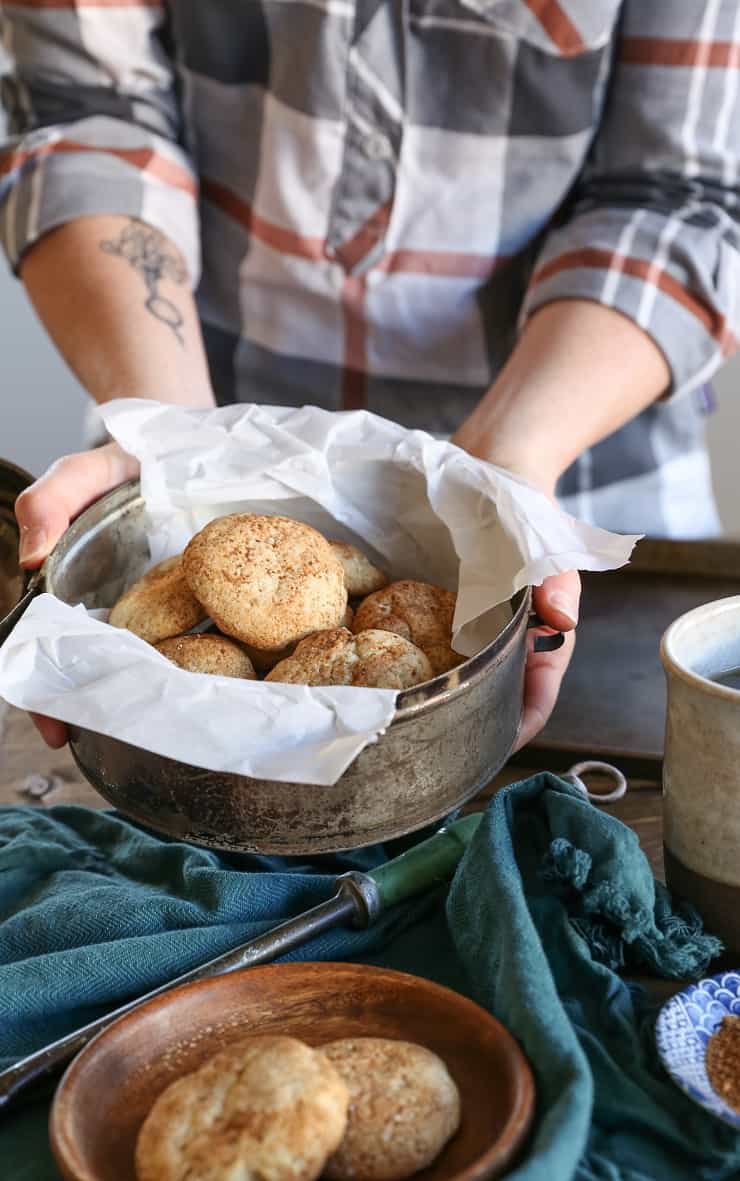 For the version using gluten-free all-purpose flour, the cookies won’t turn out sweet enough without using cane sugar in the actual dough.

Of course, you can use coconut sugar rather than cane sugar, but you’ll need to add slightly more to get the sweetness right, and the cookie itself will also turn out brownish.

So long as you’re okay with all of that, you can easily make the gluten-free version refined sugar-free as well.

I hope you enjoy these cinnamon-y delights!

I'm so happy to hear it, Letty! I hope you love them!

Hi Julia Can I use something else rather than Tapioca flour? Thanks Nicole

I love your family tradition to get together and bake cookies! That's so sweet and such a fun way to spend time together.

I'm also super impressed with the egg replacer! It worked wonders for the grain-free cookies I made as well. Both versions of these snickerdoodles look perfect. I'm totally fine if you want to gift them to me!! ;)

I LOVE making homemade treats for people this time of the year! I always make biscotti for my grandma as a christmas gift and I think she would riot if I ever didn't! haha :) These snickerdoodles sound SOOO good!

I'd much rather get an edible gift than a material item...I can never turn down anything that's homemade! These cookies look phenomenal -- it's amazing that they're vegan. I haven't done much baking yet but am really looking forward to it...it's what makes the holidays fun for me!