Turkey Beet and Zucchini Hash made with shredded beets, carrots, zucchini, yellow squash, kale, and ground turkey. A nutrient-dense breakfast that happens to be paleo and AIP friendly! 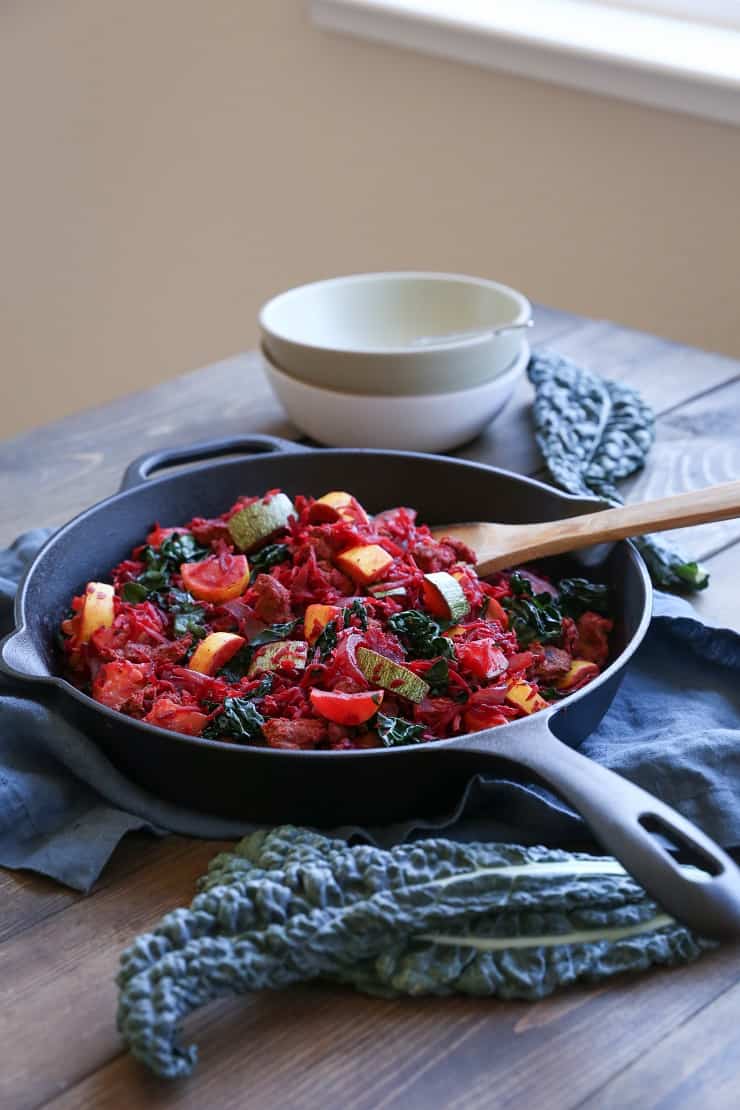 I’m just going to put on my Captain Obvious Cap and come out and say it – these photos aren’t exactly the most enticing thing to ever hit the blogland.

Aesthetics aside, this hash has been my favorite breakfast lately!

If you’re a savory breakfast person, I highly recommend you give it a go!

We’re no strangers to the breakfast hash on this site (just check out my Butternut Squash Hash with Apples and Kale,  Rutabaga Hash with Chilis and Bacon, and Sweet Potato and Leek Hash with Andouille Sausage), and for this go round, we’re using shredded beets, carrots, yellow squash, zucchini squash, kale, and sausage.

This recipe was inspired by my good friend, Kate, who made a similar recipe for me for breakfast not too long ago.

All things considered, this recipe is nutrient-dense, anti-inflammatory, paleo, whole30 and AIP.

What is Autoimmune Protocol (AIP)?:

If you’re unfamiliar with AIP, the purpose of the diet is to reduce inflammation – particularly in your digestive system, but inevitably throughout your whole body. It’s a very restrictive diet, even more so than Paleo, as in addition to eliminating gluten, dairy, refined sugar, alcohol, beans, legumes, and grains, AIP also omits eggs, nuts, dried fruit, many spices, nightshades (tomatoes, peppers, eggplant), coffee and more. To learn more about AIP, click HERE.

All this to say, Kate is a wizard at coming up with unique breakfast ideas, and this hash was an incredibly pleasant surprise. She’s a wizard with AIP recipes!

I’m constantly amazed by her creativity in coming up with unique meals and desserts – having so many limitations can be incredibly inspiring for using various types of fresh ingredients.

Kate used ground beef, which tasted amazing, and for my re-creation, I opted to use ground turkey, as I already had some in the freezer.

If you aren’t following a strict AIP or Paleo diet, you can go for uncured bacon or turkey breakfast sausage, but most breakfast meats are not AIP friendly, as they contain sugar, nitrates, and sometimes other additives that cause inflammation. When sourcing your breakfast meats, be sure to read the ingredients, and source wisely! 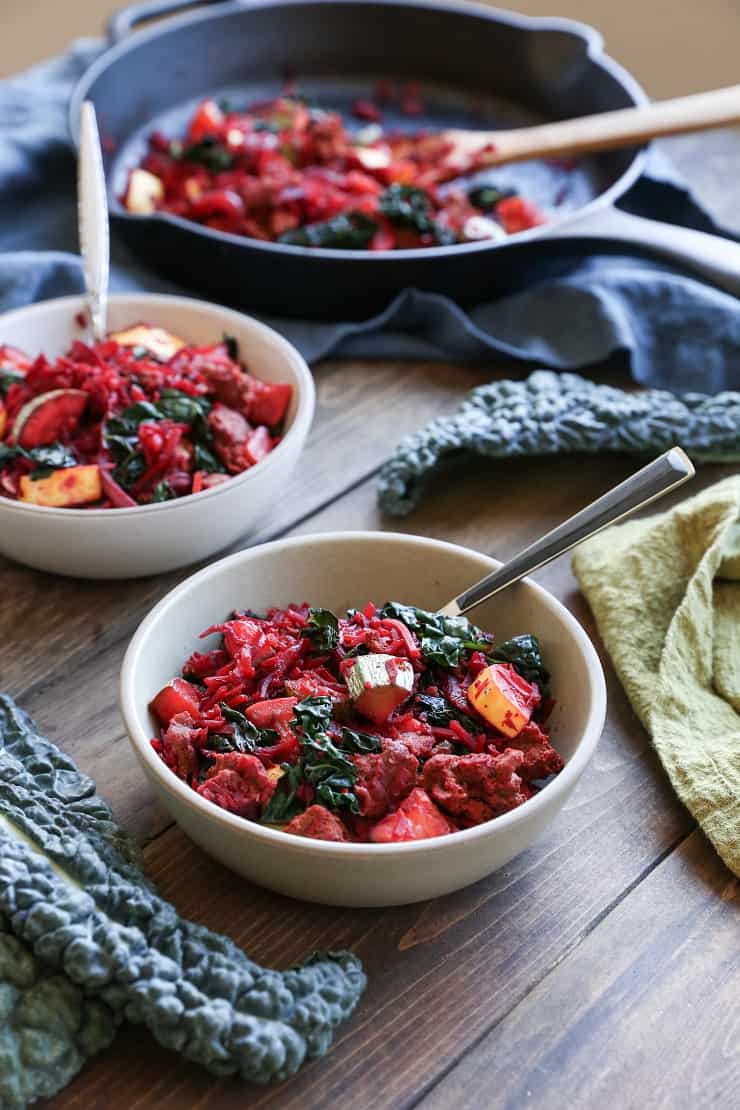 I followed Kate’s cooking technique, because she made the whole thing super quickly, and I wanted to be just like her – I chopped the squash and ran the beets and carrots through my food processor using the shredder attachment.

If you’re opposed to beets, don’t be scared!

The hash turns out super flavorful from the meat, and in the end, the beets give a sort of potato-y essence to the dish. Plus, you get the chard little crispy bits of beets and carrot on the bottom of the cast iron skillet once you’re finished, which to me are good as gold!

You can add, subtract, multiply, and divide to make this recipe your own.

Use any veggies you have on hand – if you have a CSA box, throwing the veggies into a hash like this is savage!

You’ll notice the recipe calls for 1 pound of ground turkey sausage – I ended up wishing there was less meat when all was said and done, so you can opt for ½ pound, or do as I did for a meatier experience. You can also do as Kate did and use some tasty grass-fed ground beef. 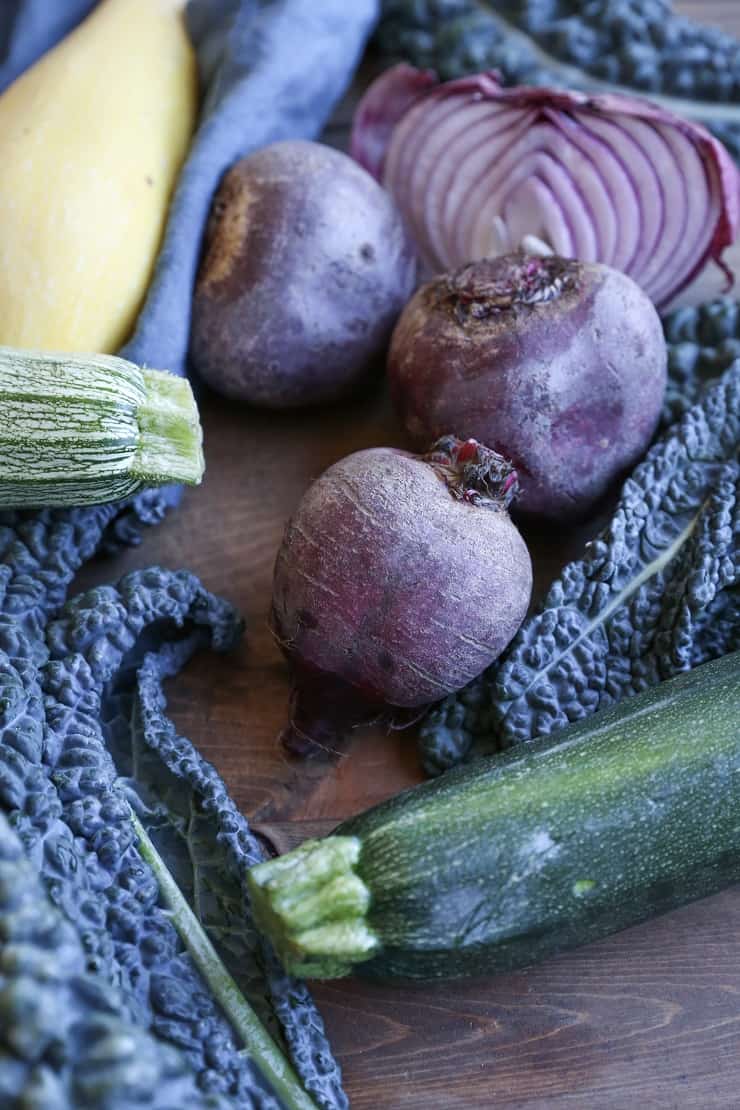 Even if you don’t follow a Paleo or an AIP diet, this hash makes for such an nutrient-dense breakfast!

It’s delicious and filling and starts your day off with powerful fuel to keep you energized and make you feel great!

Questions about paleo, AIP, this hash, and/or why the world smells so nice after it rains? Hit me up!

I hope you love this Turkey Beet and Zucchini Hash as much as I do!

*I use Diestel Ground Turkey, which you can buy online, or get at Whole Foods or your local natural food store. You can also use ground beef for this hash - just be sure to use a leaner grind and drain some of the fat before adding the vegetables to the skillet.

Omit the onion if following a low-FODMAP diet

Hi! I love everything in this recipe, so I’m giving it a shot! One question: when udon you add the kale? I ended up adding it last after the squashes. I think I made the right choice ~because it was delicious!!

Hi Anne! That's exactly what I would have done! xoxo

I had no clue what an AIP diet was so thank you for educating me! I can't imagine not being able to eat all of those foods. I'm sure it is a challenge but it sounds like Kate does a great job coming up with creative dishes like this one!