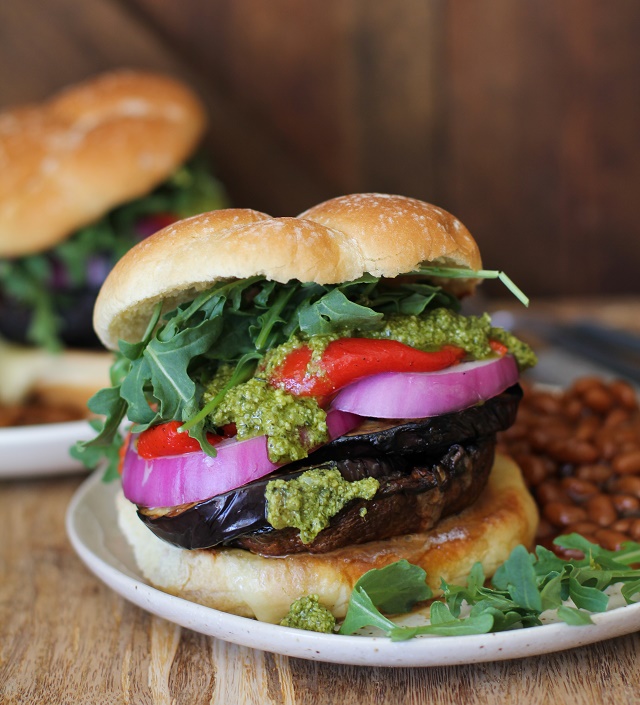 The other day, I was contemplating the meaning of the veggie burger, and all of a sudden I was hit in the frontal lobe with an idea.

Rather than making veggie burger patties, which can be time consuming, sometimes fall apart, and require more bases than I’m willing to put out on most evenings after a long day of work, why not just make a veggie burger that is just that – veggies.

No fancy patties, just some grilled (or roasted) vegetables stacked on top of each other with a funky fresh Basil Pesto Sauce. BOOM! Satisfaction.

So that’s what I did. I basically put everything I could think of that goes together on this burger.

I grilled up a couple portobello mushrooms and an eggplant, and topped those veggies with roasted red bell pepper (I used jarred, but you can certainly roast your own peppers if that’s your preference), red onion, arugula, and pesto sauce.

I toasted up some potato buns (you can use a gluten-free bun or go bun-less) with havarti cheese to sandwich everything together. And believe you me, this thing just jives.. 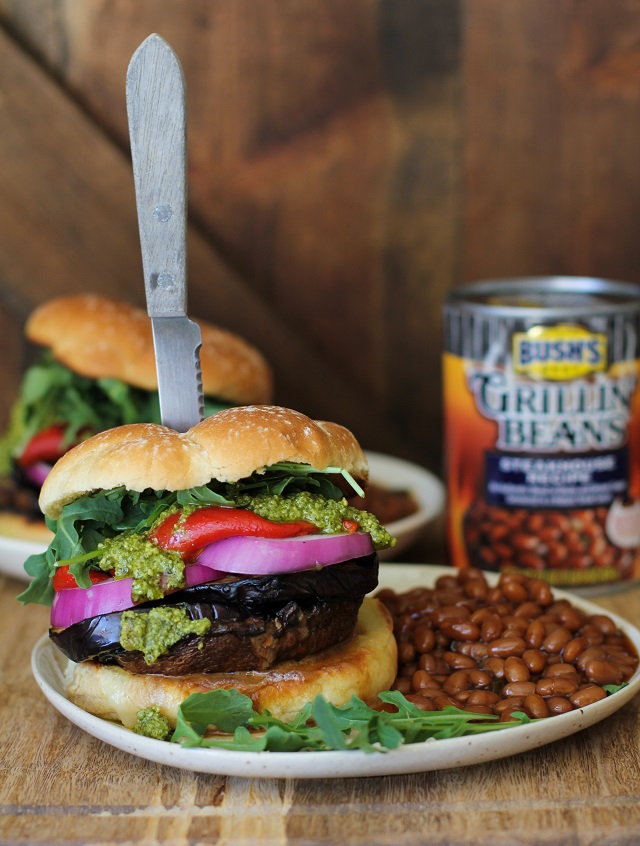 Optional changeups to the burger? We’ve got plenty.

You can add sun-dried tomatoes, whip up a homemade pesto or paleo chipotle aioli or go with a reduced balsamic drizzle, grill or caramelize the onions rather than leaving them raw, add grilled asparagus or sweet potato, replace the arugula with spinach, etc.

Get your grill on!

This has me craving summer and grilling all the things! Portobellos and pesto belong together!

This burger is gorgeous! I love the drippy pesto :) Pinning!

Yaaaaaaaas! Oh my gosh, I haven't eaten breakfast yet, but I WANT that burger right now! Can we make that happen over here?

These look so amazing! These definitely are the ultimate grilled portobello burger!

This is similar to the one I have from Rachel Ray. She puts rosemary in the marinade and a red pepper pesto. I love these. Yours is much easier. I guess I'm off to the 99 cent store for Mushrooms. I'm always surprised when i find a package of two there.