It’s the final countdown before Thanksgiving – do you have your menu dialed in? Feeling extra grateful? Are you PUMPED? 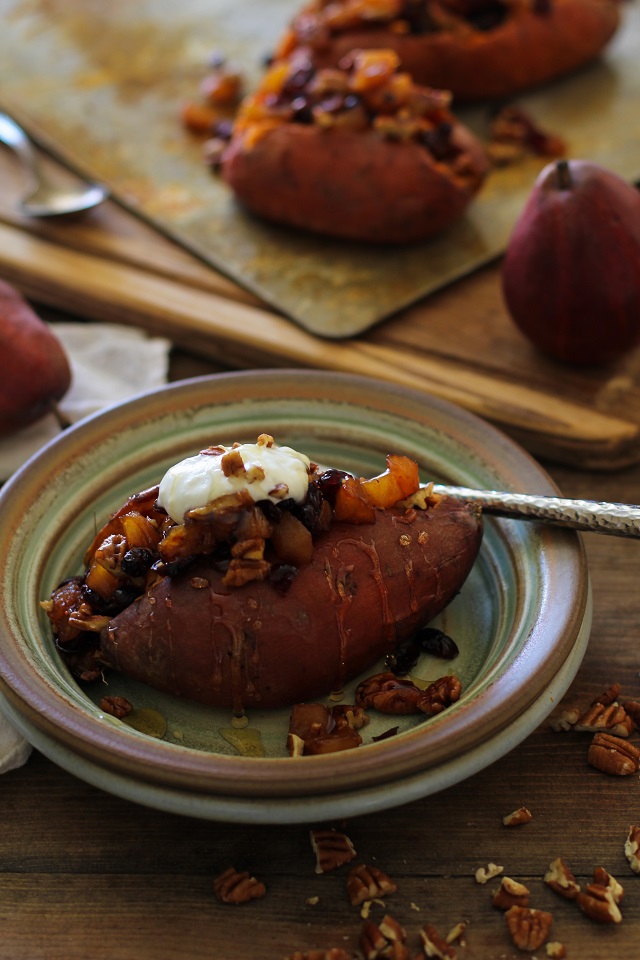 This may be an extreme thing to say a.) on a Monday, b.) when the competition for the perfect side dish is THICK, c.) when you make recipes for a living and will probably end up eating your words at some point down the road…but I’ll just have to say it anyway…

This is more than likely the best side dish I’ve ever made. Bar.none. Reasons? I’ve got plenty.

1.) It’s an all-the-flavors walk down the Eightfold Path to taste bud bliss (<- more on that later).

Let’s get down to the nitty gritty of this recipe, shall we?

This is basically a deconstruction and reconstruction situation. We roast, we mash, we stuff, we twice-bake, we adorn in toppings, we admire, we devour. These taters are stuffed with yogurt (among other things) – look out! It may sound like something you’ve never even heard of, but rest assured, this dang thing works!

I’ve been a big fan of Nancy’s yogurt for years, and was psyched when they said they were interested in partnering with me to bring you a holiday-inspired recipe. Because I’m a ginormous fan of sweet potatoes in any form, I figured I’d offer up a twice-baked stuffed sweet potato recipe with a bamboozle of flavors. I roasted the sweet potatoes, then scooped out the flesh and mashed it up with Nancy’s whole milk plain yogurt, some cinnamon, and honey, making a sweet, tangy, creamy treat that wows your face, yet is still healthful.

The stuffing sitch:  I sauteed up some pears with more cinnamon, more honey, dried cranberries and pecans. This kit and kaboodle makes for a super filling and comforting side dish…that could totally pass for dessert if you ask me! 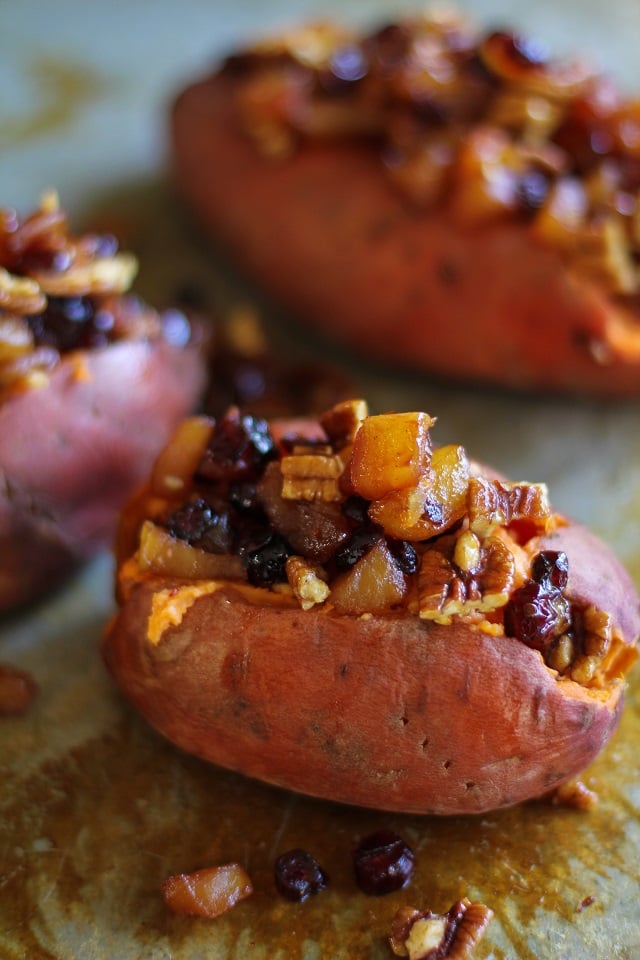 Mash ups? You can use apples instead of pears, golden raisins instead of cranberries, pure maple syrup instead of honey, and/or walnuts instead of pecans. Definitely employ whatever goodies you have on hand on the ol’ pantry shelf before making a special trip to the store.

The way I see it, this is the perfect easy side dish to include on the dining table this Thursday. Just be sure to serve the potatoes with a drizzle of honey and a dollop of plain yogurt on top to really step the experience up a notch.

Your Get Out of Kale Free Card….annnnd GO!

For the Caramelized Pear Stuffing:

This post is sponsored by Nancy’s. As per usual, all thoughts, feelings, and opinions expressed are my own. 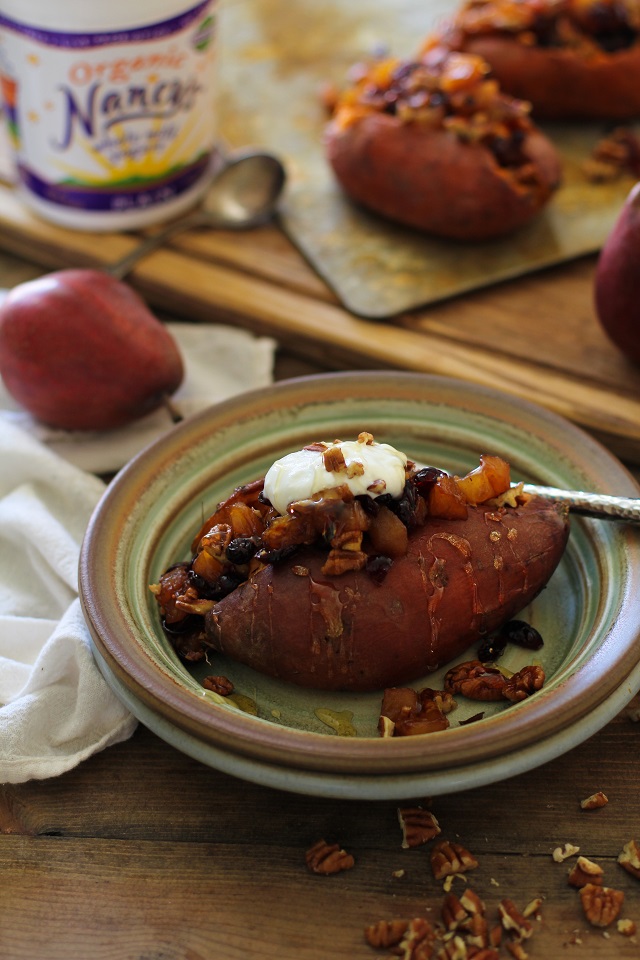 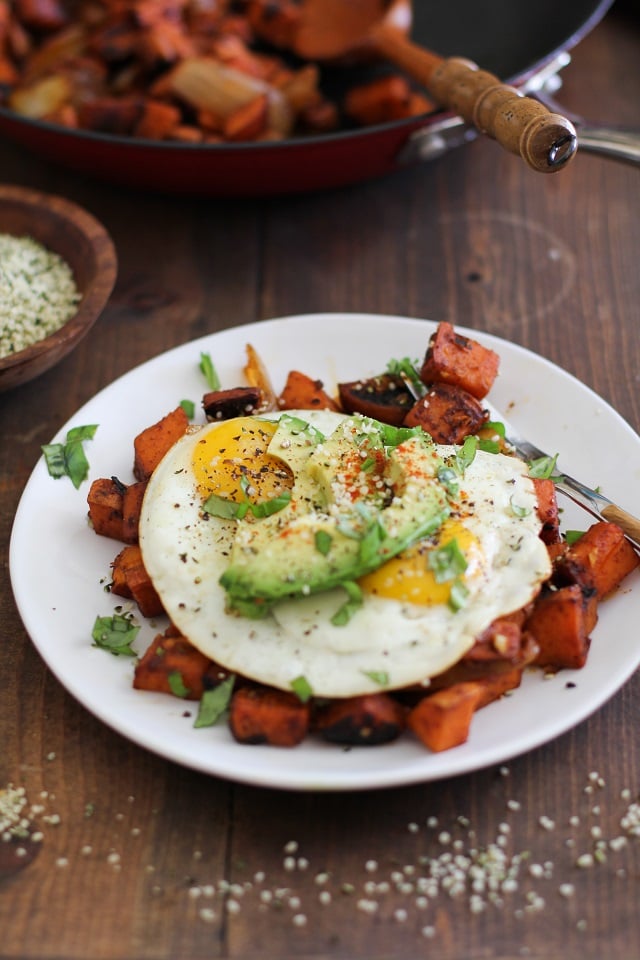 Could these be made as a sweet potato casserole for a large crowd? How would you do it if so. Thanks

Yep, I'd totally pass up a piece of pie for one of these beauties! The sound of the creamy yogurt with the sweet potato and those mouth watering toppings? Consider me dead.

You have outdone yourself here, lady! This is pure genius...I'd be a happy girl eating this as a side, dessert, breakfast, or pretty much anything in between. That stuffing stole my heart!