Nacho “cheese” kale chips are a healthful superfood vegan snack – make them in bulk to snack on throughout the week!

I resisted the temptation to name this post, “Large and In Charge Extra Crispy Cheeseless Cheesy Kale Chips (The Best Evah)”

I’m just going to come out and say it….

You guys, I fed these kale chips to my brothers and my dad, who ravaged them like a pack of rabid hyenas. I had no clue if the menfolk would be receptive to the chips (on account of the fact that they’re made out of kale), but my dad told me I should sell them on the open market and make a million dollars. For a man who loves his chocolate milk and fried chicken, I took this to be a major compliment.

The four of us (my dad, brothers, and I) stood around my brother’s kitchen munching on the chips, getting kale crumbs all over our faces, mustaches, beards, and floor. My dad was all, “Did you make this recipe?” and I was all “Mmmmhmmmm…nacho momma’s kale chips, pop. Nacho momma’s.” And he was all, “Well aren’t you just a chip off the ol’ block?” < – What can I say? We’re suckers for a good pun. 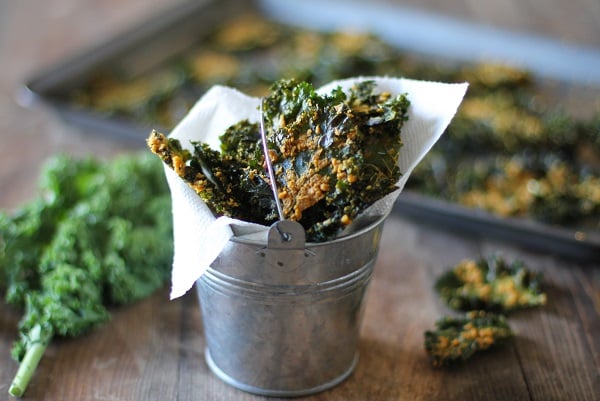 Here is where the story gets crazy. These kale chips taste all sorts of nacho cheesy, but they’re entirely cheeseless. In fact, they’re completely healthful! The cheese flavor comes from a mixture of tahini and nutritional yeast. I know…what an actual mind blow!

Nutritional yeast. It’s so mysterious. Have you heard of or tried it? What exactly is it? Can you bake with it like bread yeast? Will it leaven your pancakes? Cinnamon rolls with nutritional yeast, yay or nay? We have so many questions. Let’s answer them! 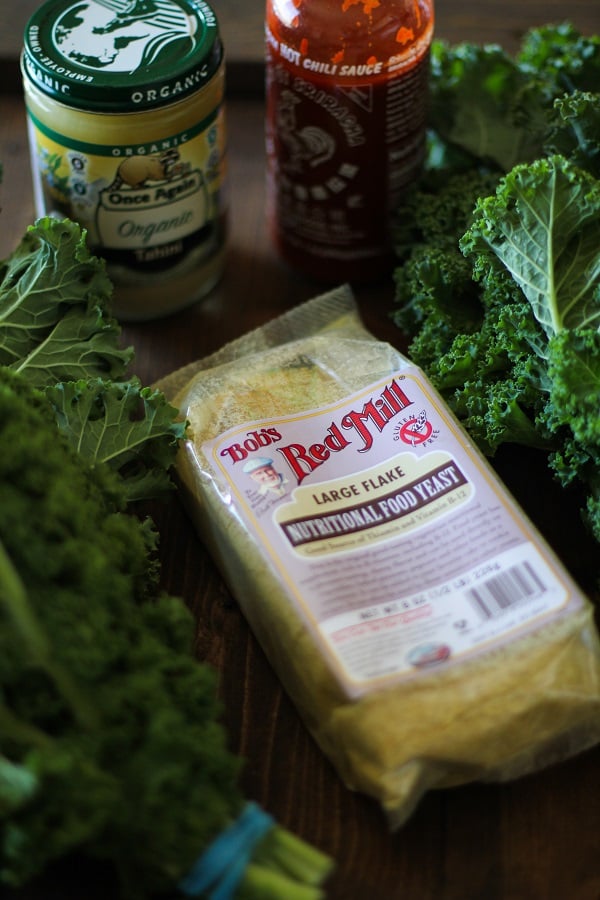 Nutritional yeast comes from the fungus, Saccharomyces cerevisiae (pronounced, “sanctimonious crevice.” Just kidding. I have no clue how it’s pronounced) and is not the same thing as bread yeast. It will not leaven your pancakes, or anything else for that matter. It’s flaky, yellow, and is used in vegan cooking to mimic the flavor of cheese. As an added bonus, it’s packed with B vitamins and all 18 amino acids, making it a complete protein. Those who have candida will not be irritated by nutritional yeast the way they will with bread yeast.

I used Bob’s Red Mill’s nutritional yeast to assemble these super crispy chips. You can also use nutritional yeast in salad dressings and sprinkle it on pasta in place of parmesan. Whether or not you’re vegan, the stuff is so tasty and fun to cook with.

I’m not going to lie and tell you these chips are the easiest things on the planet to make, because they’re kind of an event. They require about 2 hours of baking in the oven, which is why it’s smart to make them in volume.

The good news is, the process of massaging the “cheesy” nutritional yeast mixture into the leaves before popping them in the oven is actually pretty therapuetic. Plus, you can multi-task while the chips are crispifying. For you natural born snackers out there, these kale chips are super addictive.

If you need me, just follow the trail of kale crumbs.

These are now my go to snack. My Harris Teeter knows when I’m out because I buy all the kale. I started buying the nutritional yeast in bulk. Once you start you can’t stop lol

Made these this weekend and they were all gone within the day. Great way to get some greens and beyond delicious!

Woop woop! I'm so happy you made the kale chips, Cassidy!! They're just.too.adicting. Thanks for the sweet note, m'dear!! xoxox

I used to cook with nutritional yeast all the time and then it's like I forgot about it. Silly me. Now I'm seeing it EVERYWHERE. Must restock! And get kale chipping.

Looks amazing. I don't know how that nutritional yeast does it, but it tricks me all the time into thinking it's cheese! Yum!

Oooooh my goodness, I need these! I always try to make kale chips, and they always suck. I'm impatient but it looks like low and slow is key here...yours look magical! Love the nutritional yeast on them! Making and snacking ASAP.