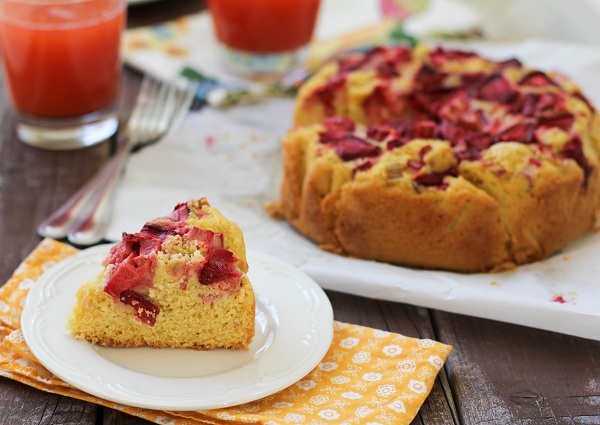 Once upon a solar system, in a galaxy far, far away, there was a lush and fertile planet. On this planet inhabited peaceful beings with hair like celery and fingers like parsnips. These vegetable-looking life-forms had the best of intentions but like so many civilized cultures, they got carried away with utilizing their lush planet’s resources and ran out of room for their waste. Being a vegetable-like creature is difficult, especially when your hair is like celery because it grows and grows and needs to be cut frequently. Over-run with celery-like hair clippings, the peaceful beings saw no other option for their waste than to jettison it into outer space. After light years of roaming the dark, cold universe, one of the hair clipping-filled capsules fell to a similarly lush planet (a third rock from the sun kind of planet), struck the ground and was embedded into its soil. From this, the seeds of hair clippings began to flourish and out of those seeds grew a red and green stalk, very similar to celery indeed. The dwellers of this planet thought the stalks strange, but in their resourceful nature, they used them in their cooking. And that is how rhubarb came to be on planet Earth. 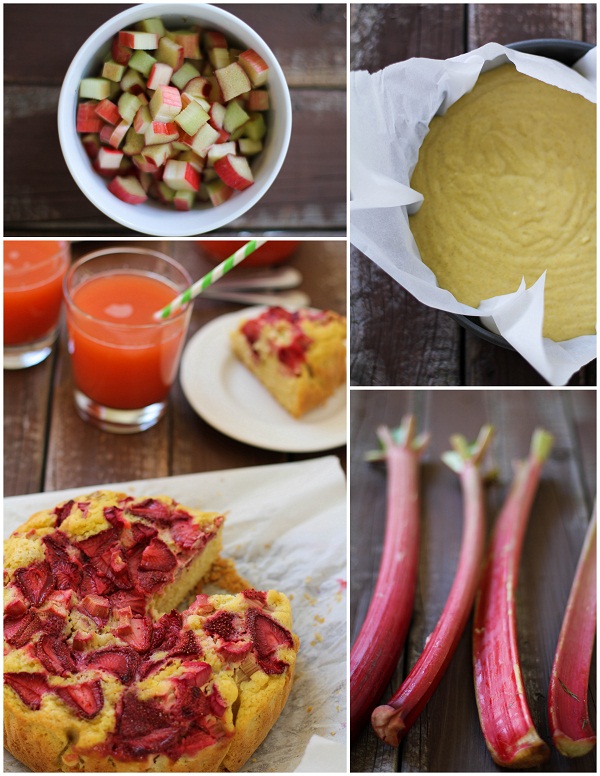 Okay, so it’s a little far-fetched. But if you’ve taken a good hard look at rhubarb, you’ve probably said to yourself, “by golly if that don’t look like the hair of an extraterrestrial, I don’t know what doesl!” And in case you were wondering if this girl’s out of her mind, your question’s been answered. But that’s my story and I’m sticking to it. 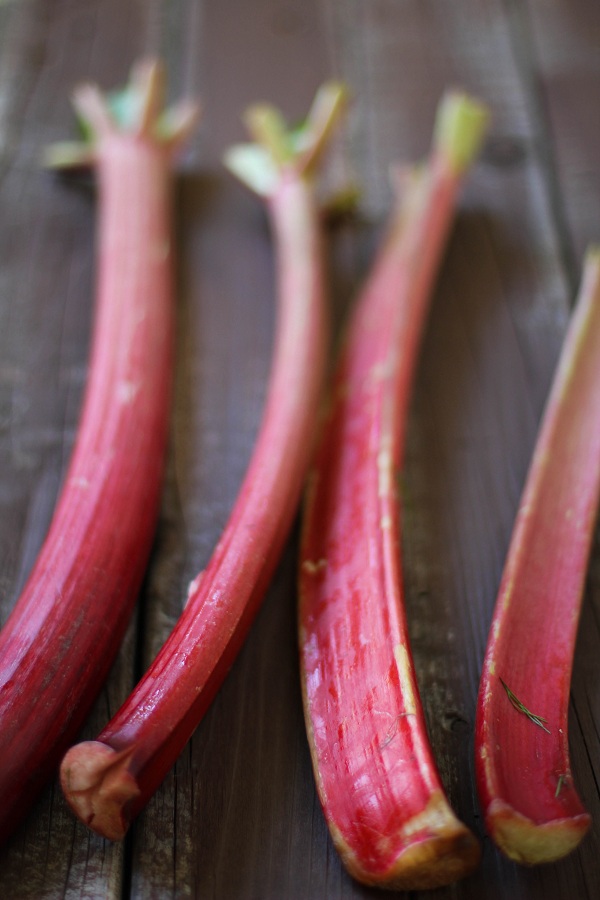 I’ll admit, I’ve been intimidated by rhubarb up until about 48 hours ago. I’ve worried that if I set it down on the counter and leave it unattended, it will re-arrange my kitchen and drop things on the floor while my back is turned. As you can tell, I didn’t grow up on a family rhubarb pie recipe. No rhubarb crumble or mimosas (is that even a thing?), no cakes or bars, so the plant has been altogether foreign to me with the exception of a brief encounter with rhubarb pie from Denny’s about 14 years ago. 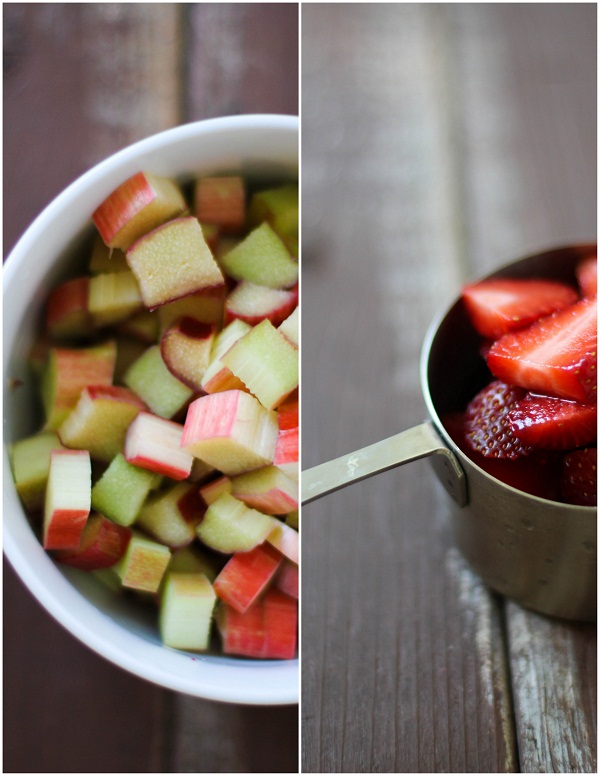 If like me, you think that rhubarb has mind control capabilities, let me assure you, it is far less dangerous when it’s all hacked up. 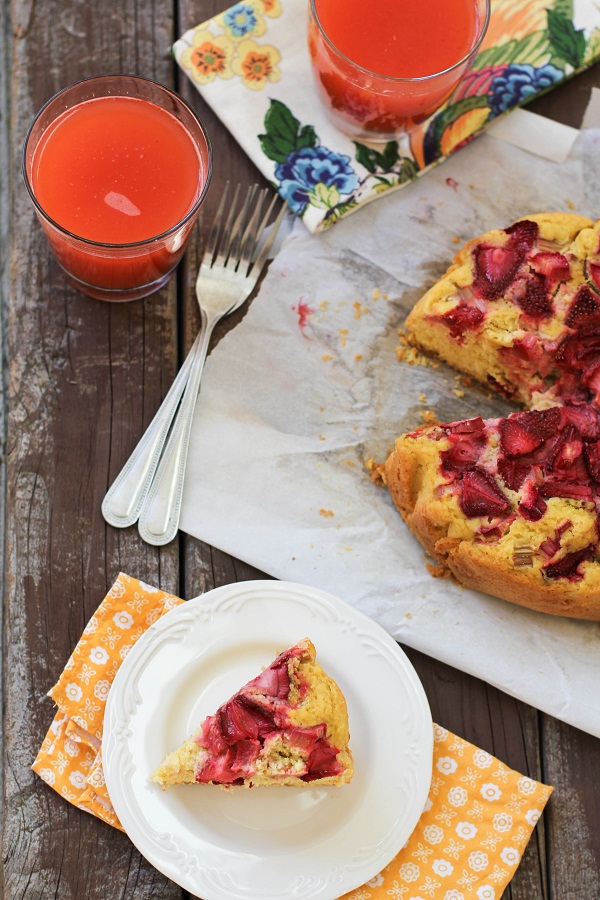 And now that I’ve had the stalks on my counter and was delighted to find my kitchen exactly as I had left it when leaving them unattended, I have grown confidence in the whacky plant. And so I made a cake out of it. And then strawberry rhubarb lemonade. And now I’d be willing to throw punches at the grocery store over picking the best rhubarb stalks. Have you had strawberry rhubarb lemonade? My relationship with lemonade will never be the same again. E’er. 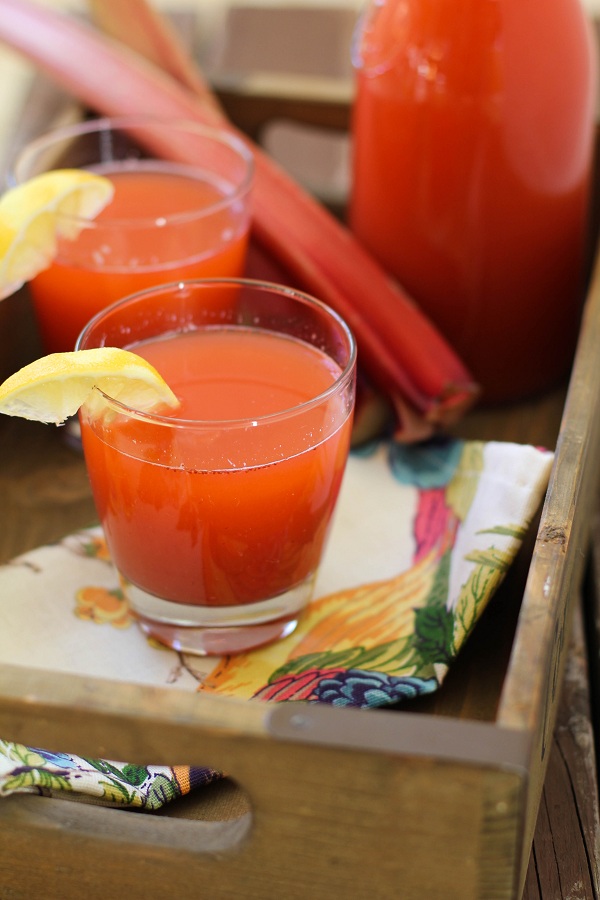 Do those lemons look a little sad? That’s because I zested the crap out of them for the cake before I used them as a garnish. That’s using your resources! This cake is gluten-free using corn flour (note: flour, not meal) and brown rice flour. There’s a lemony zestiness to it, topped with hunks of rhubarb and strawberries all stuck in. It’s the uniquest cake I ever did make, amen son. If you wanted to get reeeeeeal fancy shmancy, you could make a lemon glaze for it or sprinkle it with powdered sugar. There’s a relatively small amount of sugar in it, which can be replaced with honey so I daresay this is a cake that’s fit for breakfast. And queens. And extraterrestrials. It’s the bee’s knees. Recipe adapted from Cannelle et Vanille‘s Pink peppercorn-kissed rhubarb and berry cake. 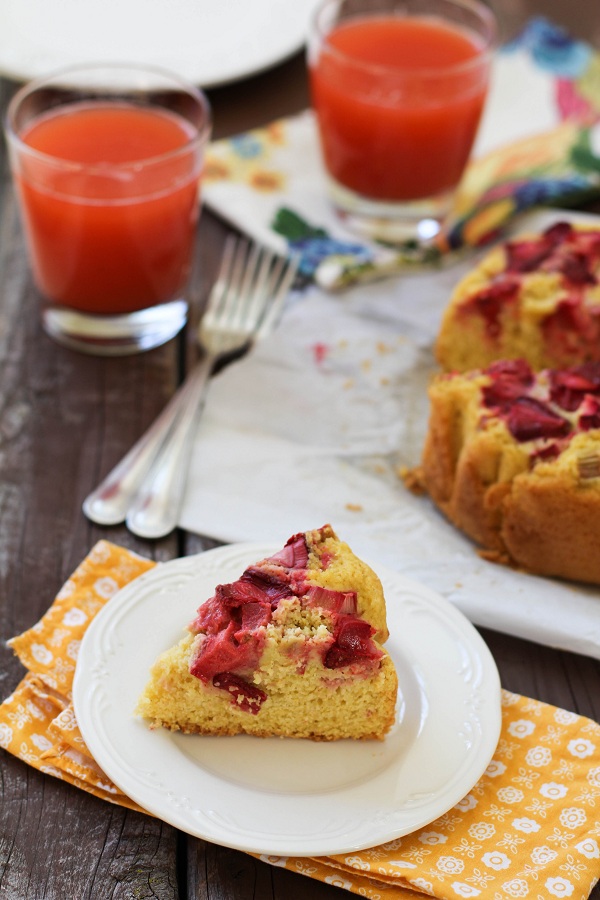 I do believe aall of the ideas you hafe introduced to your post. They are very convincing and can certainly work. Nonetheless, thhe posts are very quick for novices. Mayy you please lengthen them a little from nerxt time? Thaanks for the post.

Pretty component of content. I simply stumbled upon your site and in accessuon capital to say that I get actually enjoyed account your blog posts.

Anyway I'll be subscribing in your feeds or even I fulfillmentt youu access consistently fast.

Forex brokers are guilty of fostering such an environment by offering to open accounts for at little as $5 in some cases'although the minimum opening balance is usually about $100. By using an ECN broker (here's the one I use: ECN Accounts (and normal accounts)) and trading on a small time frame, you can get 4 to 6 trades in within a few hours. This article highlights the things you need to be considered, when choosing a Forex broker.

Yes, some of the workers routinely hit the gym, and this is what gives them their symmetrical muscular bodies, not anything they've been doing at the workplace. Also, you can learn the effect of induction training in practice. Every day, I speak with various users of manufacturing and construction software who are disappointed with their current system.

Gorgeous pictures! They make me happy! My best friend is always talking about rhubarb.... I have yet to cook with it.... guess I need to get on the bandwagon!