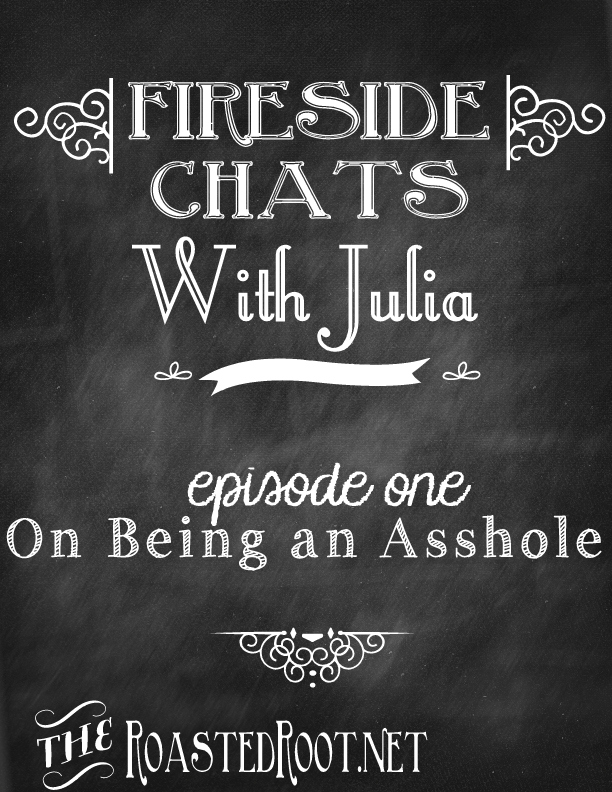 Good morning! Oh hey, this is new! Posting on a Sunday AND no pictures of food? Whaaaat’s going on here?

For quite some time, I’ve been tinkering with the idea of starting a non-food related series on my blog. Ta-daaa! This is your first installment of Fireside Chats with Julia.

From time to time, I get a wild hair and have the burning desire to share stories, thought, ideas, confessions, and general banter that are too lengthy to include in my regular recipe posts. So this series is meant for just that. If nothing else, I can chat your ear off while we cozy up and drink a pot of coffee. Each.

With liquid courage coursing through my veins (seriously…I may or may not be hung over right now) and ego a-raging, I finally have the nerve to have a Fireside Chat with you. Possibly more than one. This is, after all, a series.

What are Fireside Chats? Other than me stripping down, baring my soul, showing you my raw insides, and ::insert ridiculous cliché here::? They’re basically a way of me upchucking information and giving you a State of the Union Address, real life-style. Are you a history buff? Do you remember learning about FDR’s Fireside Chats in high school? I piggy-backed off the name of FDR’s series for my own series. Clever? I’d like to think so.

Be forewarned, I don’t know how inappropriate Fireside Chats with Julia will get. So…there’s that. There will be profanity, profundity, inappropriate commentary, possibly some whining (and wine-ing), and general nonsensical banter. For Episode One (this episode), I share with you a little story. About how I can be a real asshole. Are you ready? Should we do a little pre-chat stretching to get the blood a-flowing? I’m ready when you are….and GO!

I have a confessional for you, and I need you to NOT be on my side.

As you know, I’m a spinner (that is what she said). No really, I go to spin classes. There’s this older English bloke who teaches the Saturday classes and his choice of music can be either AWESOME or….questionable. He sings along to every song while he teaches and spins. Every song. Annnnnnd AND! some people sing along too…

…Which I think is…which I find to be… I am of the opinion…Okay, I think it’s weird. Some people may find it endearing. I find it strange. It’s too early in the morning. I am likely only able to get half of the pot of coffee in me before running out the door for class, and while I’m on the bike, I push myself to the outer limits of breathlessness, so there’s no way in hells bells I could sing a single stanza. I would, in a word, implode. I can’t partake in the spinny sing-along, but have no qualms about those who do. Except for when I do have qualms. Which is always.

So the music. Like I said: it’s hit or miss. English Bloke’s Spin Saturday songs include, but are not limited to the following:

If you’re on my same page, you LOL-ed just now. Hard. If you’re not on my same page, do this right now: pick up your cell phone and send this text to your best guy friend/boyfriend/whatever: “Your song today is Free Bird by Lynyrd Skynyrd.” I guarantee…beyond the shadow of a doubt…he will text back, “you’re kidding me, right?”

Brief aside: Free Bird is 10 minutes long. That’s 1/5 of a spin class. Dedicated to the longest guitar solo from hell. End Aside.

Playing Free Bird while I’m trying to become the awesomest spinner on the planet, imagining myself winning at the Tour de France is…it just is. It’s damn un-pretty. But…but. Get this: We’re spinning to Lynyrd, we’re mid-hill climb, we’re all sweating (me especially < – – – it’s disgusting, really. Projectile Sweat. Sweat everywhere. It’s outtacontrol). We’re all breathless. He breathlessly (but from the diaphram) sings the chorus: “and this bird you’ll never chaaaaaaaaaaaange whoa-oh-oh-oh-oh.”

And during this particular class, I’m on a bike in the FRONT ROW. So, me laughing = me laughing in his face. See? Asshole!

And he notices. HE NOTICES that I laugh in his face! So he abruptly stops singing…for the rest of the class. Oh.my. God, I’m such a sheep. I feel sheepish. Baaaaaah. BOLLOCKS! WHAT HAVE I DOOOOOOONE?

The look on English Bloke’s face plus his sudden lack of singing knocks the very little wind I do have right out of me. I immediately feel like crap. I’m a feeler, you see? So for the rest of class, my tail’s between my legs, and the wind is out of my sails. At the end of class, I thank him…for the class…without making eye contact. I walk away. Just…walk away.

I swear, this story has a happy ending. Keep reading.

Each Saturday thereafter, English Bloke is pretty stoic. He’s less English. Less sing-y. And I can only deduce that it’s because of me. Mind you, he does sing every once in a while, when he reaaaaaaaaaaaaaally can’t hold it in…but when he does sing, it’s subdued, and more of an under-the-breath sing. A whisper-sing.

BUT! Get this – – – -> The other spinners keep singing every Saturday like it’s business as usual. And this makes me feel EVEN MORE GAAAH-AWFUL-ER because I can tell they enjoy the free spiritedness of the spin sing and they probably want his vocal stylings back in order to head up the sing-along song-athon.

I internalize much from this. I deduce that I have reaped these people of their leader. Will the sing song morale be lost forever? What do I do? How do I fix English Bloke’s broken voice?

There’s no answer. So I tell my mother everything. Because that’s what I do when I have done something bad. I confess to mom. Moms are for unloading wrongdoings because they always have the right things to say. Mom’s response? “He sings? No, Julia, that’s just weird!” < – – – it’s as though I’m my mother’s daughter.

Anyhoo, me: “What was that last song you played? I reaaaaaally like that song!”

And that’s it. Connection: made. Gap: bridged. Mission: accomplished.

And I walk out the door feeling SO GOOD, because those BRIGHT BLUE-ASS ENGLISH EYES told me: everything’s okay. Phew! Sigh! Aaaaaaaaaaaaaah! Pssssh. Mmmmmmmmmm. I’m okay now. I’m in the clear. I have made good. I will never laugh again, not at ANYYYYYYYTHING!

There’s a lesson that can be learned here. A take-away, if you will: don’t be an asshole. The end.

But not really. Because LAST SATURDAY, guess what song the English Bloke puts on? Can you guess? You can guess. You guessed it. Free Bird. Shit!

10 minutes of Free Bird and it’s all because I fixed something that I maybe should have left broken. English Bloke gives me a snarky, blue-eyed English-y look as he sings the Godforsaken chorus, and I am just beside myself. Edit – – -> Undo.

The second valuable take-away I learned from this (aside from: don’t be an asshole) is: this bird you’ll never change.

Haha this post was hilarious and I am already in love with this new series. Okay, my two cents...you should have song along enthusiastically after you laughed and it would have all been different! :) I would have laughed to and people singing would either drive me completely bonkers or I would be singing along with the best of them depending on my mood. It's really hit or miss with me ;) Can't wait to see the next post!!

This was hysterical. Keep 'em coming! (I would have laughed, too).

Rebecca @ it's a nourishing thing

I love this new series. I definitely laughed out loud for the entire thing. I'm with you and your mom for sure. Who sings in spin class?!?

Love this new series! I've been wanting to take a spinning class. I mean, I love to cycle on the trails, so why not spin, right? You're right. Free Bird is the longest song ever, with Stairway to Heaven coming in at a close second.

Totally digging this new series, Julia! And more than anything on earth I want to come to your spin class!!!

YES, please do! It will slaaaay you!!