I almost titled this post “An Exceedingly Untraditional Approach to Horchata.” But I didn’t want you to scamper off.

Horchata is the drink of angels.

You guys, this recipe is super inauthentic, but super tasty. 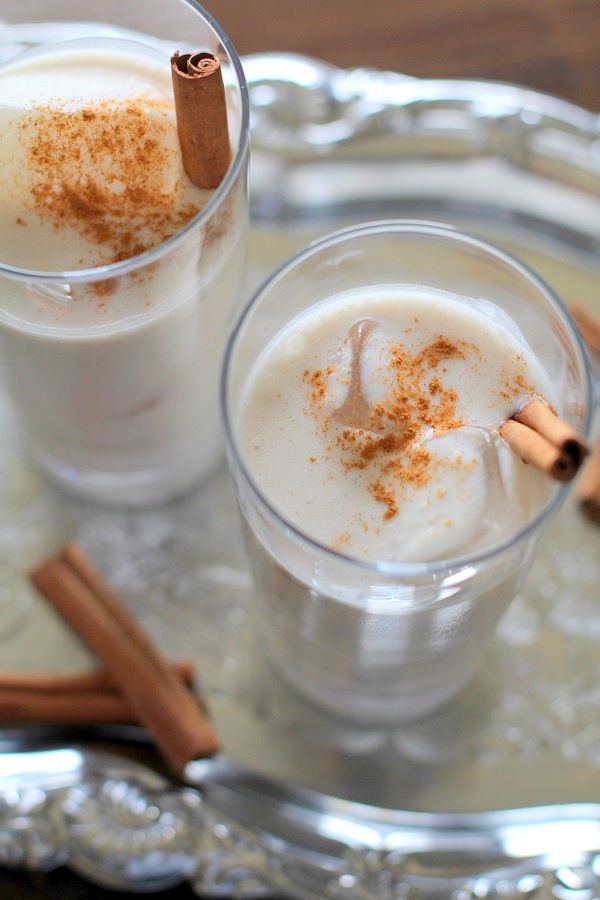 One of my all-time favorite meals back in my college days was a ginormous carne asada burrito and a huge glass of ice cold horchata. So I swapped out my eggnog with horchata, and lemme tell ya: I’d be up for making this a yearly tradition.

Making horchata is serious business. Like, it comes with this whole set of guidelines. The Mexican version is typically made with white rice, blanched almonds, sugar, cinnamon, milk or water, and sometimes lime juice.

The Spanish version is made with tigernuts, water, and sugar (sometimes sesame seeds or barley) The process is somewhat lengthy, but it’s worth every ounce of effort you put into it. Here are the basics  for Mexican-style horchata.

How to Make Traditional Mexican Horchata:

3.) Blend rice and blanched almonds with water or milk

Optional: some people add lime juice or lime zest. I have never tried this, so I can’t speak to the flavor.

I feel very strongly about horchata; however, I try to limit my sugar and dairy intake. So I subtracted the milk and sugar and substituted in coconut milk and maple syrup. I also LOVE skipping steps, so I omitted the blanching-of-the-almonds, and simply added unsweetened almond milk. I know. Super lazy…super inauthentic. Girl’s gotta do what a girl’s gotta do. 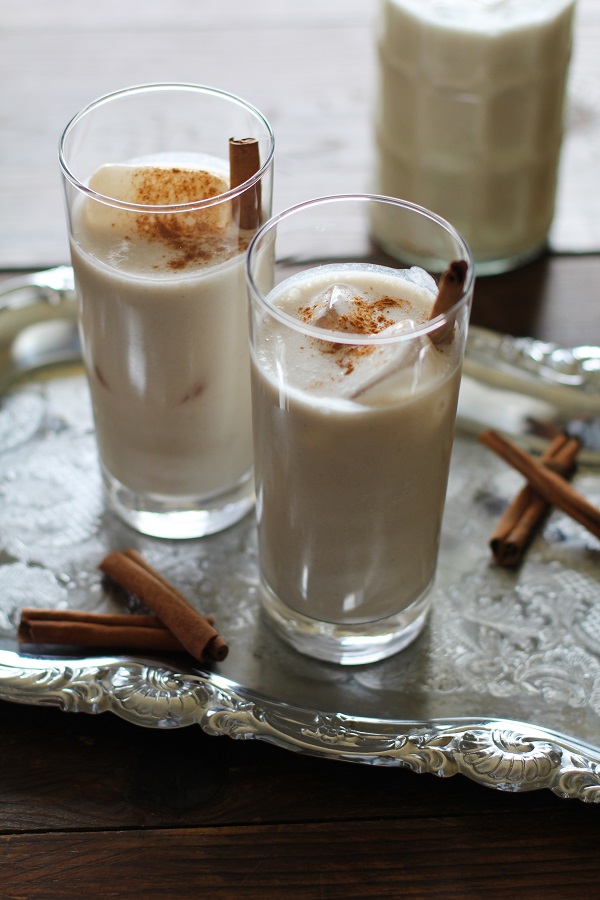 Replacing milk and sugar’s a cinch, but what about all the rice soaking? I mean, that puts a lot of distance between me and my final destination. One balmy evening, I needed horchata and I needed it RIGHT THEN.

I’m all about following the rules (not), but waiting an entire night to allow rice to soak was just not something I was prepared to do. So I cooked the rice. In straight up coconut milk. With a couple cinnamon sticks.

After the rice was cooked, I blended everything for about 1 minute in my Blendtec Blender. If you don’t have a super powerful blender, I would recommend blending the mixture for 2 to 3 minutes until the rice is very well pulverized.

After everything was pureed, I strained the liquid through a sieve (fine wire mesh strainer). You can also strain the horchata through cheesecloth. This is not a step I would recommend skipping. The straining really makes for a smooth and creamy texture, which is one of horchata’s finest characteristics.

If you’re looking for the true, authentic, badass way of making horchata at home, follow this awesome tutorial from NoshOn.it. on How to Make Authentic Horchata.

Enjoy the drink of angels!

Well this was a huge crowd pleaser!

We tripled the recipe and it worked perfectly. I used maple syrup and left out the vanilla (just because I didn't have any) and it was still UNREAL!

Yaaaay I'm so thrilled to hear it!! Thanks for letting me know! xo

Really excited to try this tonight for the ceremonies. I made it this morning. We're planning on putting some coffee ice cubes in it and some bourbon. :) Happy Olympics!

So I stumbled upon this trying to find a recipe for dairy free horchata. My dad is on a dairy-free, sugar-free (as much as possible) diet for pain/ inflammation management. So, so glad I did. I love it with a shot of espresso, so this is something like a cream replacement for his coffee. Used brown rice, left totally unsweetened (made a simple syrup for my mom to add when she inevitable has a glass) and cooked it for a bit longer. Delish! Can't believe how close it tastes to the real thing.

Yeeees! I'm so happy you like the horchata, Jessica! I was pretty psyched when I learned I could cut down the prep time and still have a tasty bevvie. Thanks so much for the feedback :D

Uh, YUM! I shall forgive you insisting we do the whole straining part, because gritty horchata is shitty horchata (though I was secretly hoping you'd found a way around even that step, because I'm apparently The Laziest). Definitely liking the sound of this way better than nog for all appropriate holidays. :) Happy New Year! <3

Given my track record of remembering to soak anything the night before I want to cook with it (ahem chickpeas - I'm looking at you)...I LOVE THIS NO-SOAK METHOD. I feel like my beverage selection is about to get way more delicious.