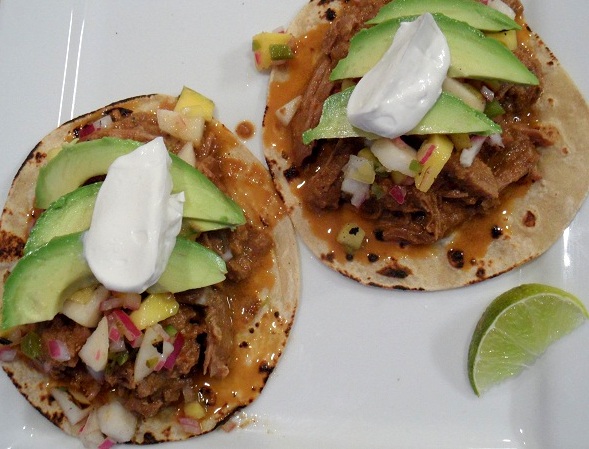 A couple of months ago, I tried the Chicken Mole (pronounced mole lay) at Bertha Miranda’s Mexican restaurant in Reno, NV.  At the moment that my taste buds sent yummy signals to my brain during the first bite, I had one thought: mmmlllphhh.  After that thought was processed, I said to myself, I’m going to make a mole and I’m going to make it with turkey.  And so I did.  And boy did my sauce turn out differently than Bertha Miranda’s sauce.  Bertha’s sauce is a Negra Mole: thick, dark, nutty, sweet, robust with only the slightest hint of creamy chocolate, unlike anything else in the world.

During the compilation of the mole sauce, I felt akin to Bertha and pictured her giving me mole-making instructions in her kitchen, speaking Spanish the whole time, which I understood (having never spoken a lick of Spanish) because this was my fantasy, I get to make the rules.  To be serious, I rarely want a recipe for a sauce I have tried at a restaurant, but I yearn for Bertha’s mole recipe with the might of a kid swinging his bat at a piñata.  While I was very pleased with the way my sauce turned out, there was really no comparing it to mi tia Bertha’s sauce.

In all honesty, my experience making the mole sent me into a sense of urgency and near panic: anxiety that my non-Latin roots would forever shield me from the magical knowledge of mole harvest.  After my cultural identity crisis subsided, was alleviated somewhat, all but disappeared, I was left with the distinct impression that there are certain things that I am not meant to understand.  Like why the race for presidential candidacy starts 17 years before the elections, how to obtain direct and personal contact with Hugh Jackman, and where is the fool-proof 100% accurate you-can-make-it-even-if-you-don’t-have-Hispanic-roots recipe for the mythical Bertha mole.

Lo and behold, my recipe turned out pretty well; but I maintain the determination to deconstruct the Bertha mole and understand its every component until ultimate perfection is achieved.  The mole recipes I researched on the internet all included varieties of chillies and peppers I have never heard of (nor can pronounce) and have never seen at the grocery store. For this reason, I decided to use items that one can find in virtually any produce section.  There is no doubt that pepper choice will effect the mole flavor, so I would by no means consider my recipe an authentic mole….more like a mole de Julio (yes, Julio is my nickname even if it is a man’s name).  So for the time being, cultural anxiety to the side, I self-calm and allow the reality to wash over me that one day yes one day, Bertha will seek me out and tell me, “Julia {Julio}. Your time has come. That’s right; I will now teach you how to make a mole.”

For the Dark Meat Turkey Mole

To Make the Salsa:

Finely chop the red onion and place in a medium-sized mixing bowl.  Roast the jalapeno and Serrano over an open flame (I do this over my gas range), de-seed them, chop finely and add to the mixing bowl.  Chop mango and pear into bite-sized pieces.  Add apple cider vinegar and lime juice.  Mix well and store in a jar or bowl until it is served on a turkey mole taco!

To Make the Turkey Mole:

Bust out your crock pot. Cut the netting off of your roast and flay it open in the crock pot.  Sprinkle the meat all over with salt, paprika and garlic powder.

Over medium heat in a wok or pot, add sesame oil and begin sautéing onion and garlic until fragrant and onion begins turning golden brown.  Add cumin and cinnamon.  After you blanch the almonds in boiling water for 1 minute, add the almonds, walnuts and raisins to the pot.  Add the chicken stock and diced tomatoes, bringing the mixture to a boil.  Add the chocolate. Allow all the flavors to cook together while you roast all of the peppers/chilies over an open flame until the skin begins to flake off.  Remove stems and seeds from all chilies and peppers, then add the flesh to the pot and mix well.  Pour all of the ingredients from the pot into a blender or food processor and blend until smooth.  Pour the mole into the crock pot with your meat and cook on low for 8 hours or on high for 3 – 4 hours.  When meat is ready, using a fork, pull the meat apart to shred it.  Leave the shredded meat in the crock pot with all of the sauce for at least an additional 15 minutes so that the meat continues to absorb the mole.

Heat olive oil (or sunflower oil) over a skillet until it sizzles when you flick water over it (medium to medium-high heat depending on your stove). Peel and cut plantains lengthwise, less than a quarter of an inch thick.  Each plantain should yield about 6 long chips, depending on how thick you like the chips.  I enjoy them crispy on the outside but squishy in the middle, so I cut mine fairly thick.  Place the strips of plantain in the skillet to fry on each side, about 1 minute per side. Carefully remove the plantains from the skillet with a pair of tongs and set on a plate with a paper towel on top.  Salt the fried plantains to taste.

For a Turkey Mole Taco:

Place desired amount of turkey mole meat in the center of a corn tortilla.  Add Mango & Pear Fire-Roasted Salsa liberally.  Slice up some avocado, add on top.  Grate your favorite cheese over the taco and that’s a mole!  Serve with fried platanos! 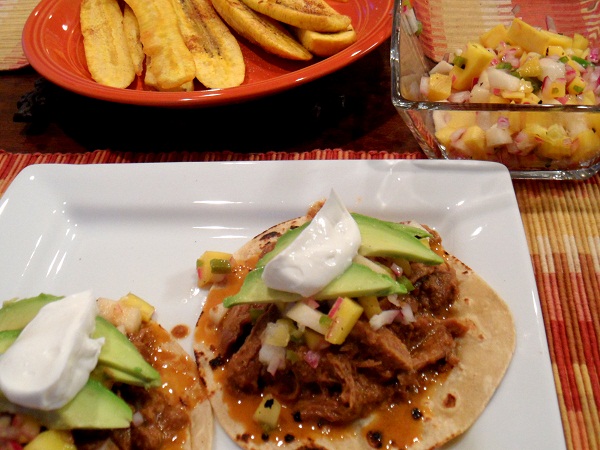