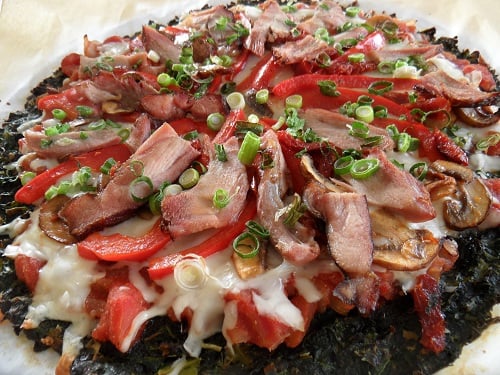 If you remember my apple coconut pancakes post, you are familiar with the two “chefs” of the house (that would be me and Garrett) battling it out for best assemblage bragging rights.

For this edition of Kitchen Competition, we made individual (uhhh…if you consider 13” individual-sized) pizzas using pizza crust made out of collard greens and spinach.

While we do avoid making wheat products, we both very much enjoy the taste of the collard greens/spinach crust, so it’s more for the added vitamins and great taste than to avoid gluten (neither of us are really gluten-intolerant).

By now, you don’t need me to tell you how nutritious leafy greens are for you. If you do it correctly, this crust holds up the way a normal crust would – it gets crispy and you can easily pick up your pizza – no need for utensils.

When it comes to pizza sauce, I tend to be a minimalist.

My energy goes into the pizza toppings so I keep the pizza sauce very simple.

For these pizzas, we made a chunky tomato basil sauce that we concocted while the pizza crust was crisping up in the oven.

We compiled our pizzas as though the weight of the history of Pizza were on our shoulders.  Rest assured, Pizza made it through the battle unscathed.

If you like pizza, no need to turn up your nose at the flour-less crust – it just means you get to eat more slices without feeling like you’re going to crash into a food coma!

His and Hers pizzas are fun and definitely a dinner event to look forward to.  Get creative with your toppings and sauces then let me know how it goes!

As a side note, this pizza is nearly paleo…if you know of a good cheese substitute or enjoy cheese-less pizza then this can be adapted into a paleo recipe.

For the pizza sauce:

For the pizza topping:

Preheat the oven to 350 degrees and spread the frozen chopped collard greens and spinach on a cookie sheet.  Bake in the oven for 10 minutes, enough time to thaw the greens.

In a small skillet over medium-low heat, add your butter, oil, garlic, sun-dried tomatoes and salt and pepper.  Sauté until mushrooms are soft and mixture is fragrant.  Beat the eggs in a medium-sized mixing bowl. Remove the collards and spinach from the oven and squeeze the water out of them; you can put the greens in a cheesecloth for this step or use just your hands. Place the greens in the mixing bowl with the egg.  Add the sautéed ingredients into the mixing bowl and mix all ingredients well, ensuring the eggs are well incorporated.

Increase oven heat to 375 degrees F. Line a large baking sheet or two 13-inch pizza trays with parchment paper. Transfer the greens mixture onto the parchment paper and pat down using your hands or a fork until the entire pizza tray is evenly covered (the crust will be thin). Place both pizza crusts and the tin foil-wrapped turkey thigh in the oven. Bake for 35 – 40 minutes (without toppings) until the edges are barely beginning to crisp.

Place pizzas in the oven and bake at 400 for 10 minutes until cheese is fully melted and toppings have reached the desired crisp. Keep a close eye on the pizza, as the edges of the crust burn easily. Allow pizza to cool 10 minutes before slicing and serving 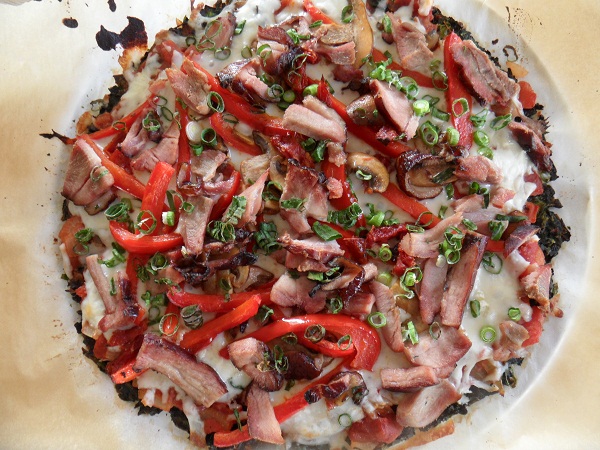 I've been wanting to make this pizza for months. This weekend is it! I can't wait to assemble the world's healthiest pizza dish!