Dark Chocolate Chipotle Brownies made with oat flour are a tasty gluten-free, refined sugar-free brownie recipe with a little kick! 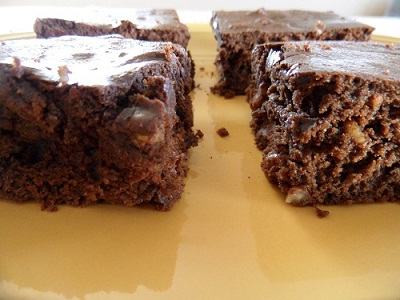 Everyone should feel lucky this month as we food bloggers are hosting the chocolate love blog hop, where we share and post our chocolate recipes.  Unlimited access to chocolate recipes created by people who really, REALLY love chocolate? Yup, best idea ever.

This wheat-free brownie recipe will impress your foodie friends and prevent any gut complaints from your gluten-free buds.

In the realm of sweets, these brownies are not too shabby for your bod, as the agave makes them lower on the glycemic index than normal brownies, and the walnuts, coconut milk and oat flour provide protein and slow-burning carbs for quite the nutrient dense dessert!

How to Make Chipotle Brownies:

Preheat oven to 350 degrees. Line an 8×8 baking dish with parchment paper, using enough paper to give yourself handles for pulling the brownies out of the baking dish when cooled.

In a small saucepan over low heat, add cocoa powder, olive oil, coconut milk, and agave.  Heat while stirring well but don’t bring to a boil.  Once the ingredients are mixed well, add the cinnamon, chipotle powder and one egg yolk (reserve the egg white).  Continue to heat one more minute and then remove from heat and set aside.

In a mixing bowl, beat two eggs and one egg white and the vanilla extract.  Slowly mix in the oat flour, baking powder and salt, stirring until smooth to get all clumps out.  Pour the chocolate mixture from the saucepan into the mixing bowl and mix until well incorporated. 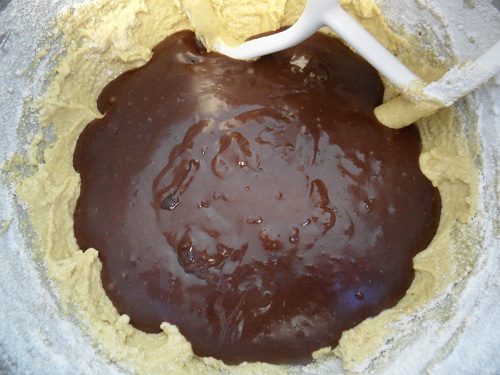 Fold in the chopped walnuts and chocolate chips.  Pour the batter into the parchment-lined dish and bake in the oven about 22 minutes.  We are going for gooey brownies here so when you stick a toothpick in the middle of the brownies, it should not test clean, but should also not be overly gooey.

Allow brownies to cool about 30 minutes.  Using the parchment paper to remove the brownies from the baking dish, turn the brownies out onto a cutting board.  Cut large brownies and serve with a big bowl of ice cream!